David Ayer movies are a bit hit and miss. As a writer he scored big with Training Day, as a director he's had a harder time of things. With The Tax Collector Ayer aims to give audiences a gritty action-packed crime saga in the vein of a modern-day The Godfather - but this epic takes too long to get going while feeling like it's missing a lot of story and plot. The Tax Collector arrives on 4K UHD Blu-ray from RLJE in an exclusive SteelBook package at Best Buy. Without any HDR, the improvement in picture quality over the 1080p Blu-ray is only modest and mostly due to larger bitrate. Same audio for both. Given the movie and this 4K disc's specs, it's a 50/50 proposition. At least the SteelBook looks pretty good! Worth A Look

David (Bobby Soto) is a "Tax Collector" for the local L.A. heavy known as Wizard. While Wizard lives it up in prison, David and his righthand man Creeper (Shia LaBeouf) collect their 30% from the local gangs in exchange for protection and mediation if there's ever any petty squabbles. Everything is run out of his uncle Louis' (George Lopez) garage. All danger aside, it's a good life. David is respected in the gangs as a fair operator while he lives big with a nice house, a wife, and kids. All of that is about to change when Wizard's old rival Conejo (Jose Conejo Martin) decides to take the gangs for himself and wipe out David's life. 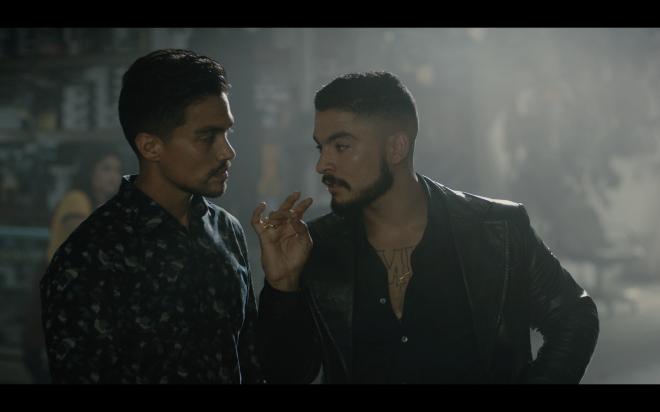 David Ayer is the filmmaker I deep down root for. The guy worked his way up without going through traditional film school grinds. He got in as a writer, surrounded himself with the right people, got to work and made it. Yeah, he's not perfect and his worst tendencies for overly-graphic hyper-macho violence can become repetitive, but most of the time he's pretty good. At their worst, his movies are at least entertaining and he gets great performances out of his cast. All that said, something missed the mark with The Tax Collector.

This is a big canvas film. While Fury plunged the audience into the depths of WWII, it was viewed within the confines of a tank squadron. There was an intimacy to that movie with the cast of characters and the mission. The Tax Collector aims to do something similar with David's family business and Creeper but blow up the world to the nitty-gritty underworld of Las Angeles gang life. I love the fact that this movie took its time to get going. It's all world-building, introducing us to various characters, how David does business, how he's respected with rival gangs as an honest broker. It's nearly a full 45-minutes before the inciting incident happens and I'm loving it because we actually get to know who these people are and how they function. There are even callbacks to Training Day and Harsh Times pulling them into the same little universe. Then when the big second act moment hits - you think you're in for one hell of an epic battle. The problem is by that point there's hardly 30-minutes of the movie left.

If you break it down by screenplay structure, The Tax Collector feels like it's missing its second act entirely. The setup happens - but then the movie just kinda goes through the motions as fast as possible to get to a quick third act resolution. David tries to find a way to escape with his family and when that doesn't work he tries something else and when that doesn't work he has to return to the loyalty of one gang all inside of a few minutes. To call it "rushed" is an understatement. The Tax Collector honestly feels like it's going for a grand The Godfather-like 3-hour epic crime drama, but had half the time to execute it. I kept having to go back and rewatch scenes because it was so disjointed. It's frustrating because that first 45-minutes was so good, some of the best stuff Ayer executed as a writer/director. The rest of it goes to pot.

Since he's front and center throughout the movie, Bobby Soto handles the workload. He brings a lot of heart and passion to the part and plays a man in over his head convincingly. You feel for him when things go south and you want the world to work right by him ASAP. Shia LaBeouf is another story. Don't get me wrong, he's amazing. He looks and feels like a ticking time bomb ready to go off, but you don't get that moment. We're teased with what he could do when let off the chain - but nothing more. Without spoiling anything I'll just put it out there that the infamous and extensive body tattoos he got for this movie weren't at all necessary.

And then… it's over. Snap of the fingers, the film is done. You feel like you saw the movie but didn't get to really enjoy the whole show. The Tax Collector is like a pepperoni pizza Hot Pocket that didn't get cooked all the way through. You don't realize it's still frozen until you get to the middle, so you eat around the edges. You sort of get the flavor and a few meaty bits, but the best of it is lost because you can't cook it twice. I'd love to read Ayer's original screenplay for this because it really does feel like a movie with a lot more to it. I don't know if that material was filmed and cut for a shorter run time or if budget issues pulled it short, but The Tax Collector has an epic start with a trivial finish. 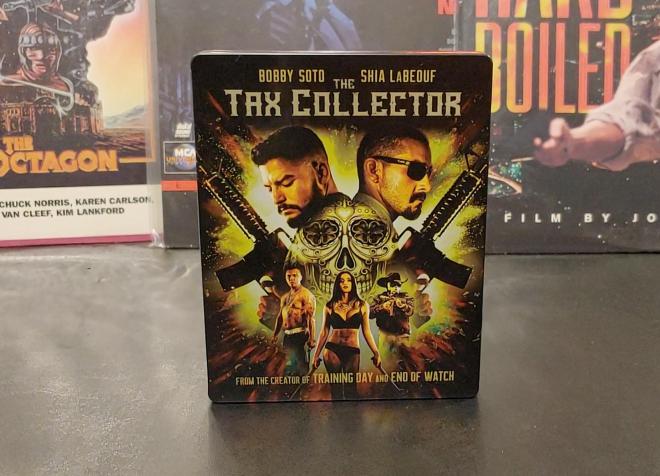 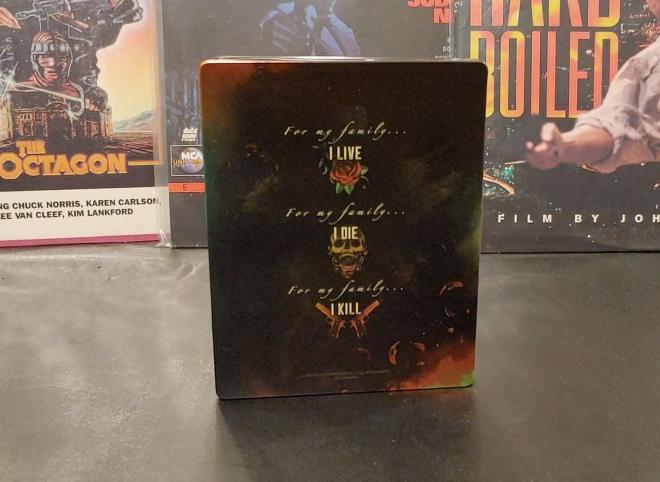 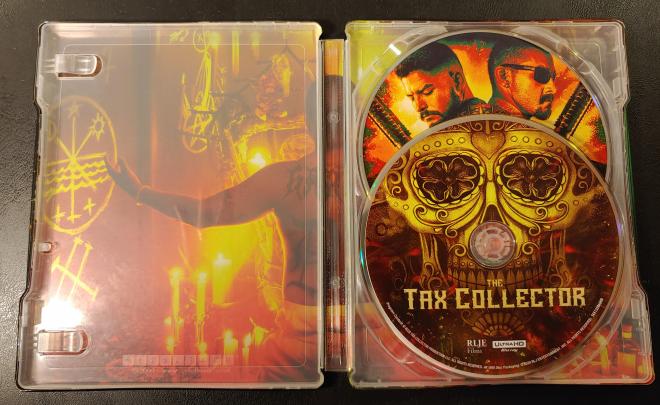 As I was unable to find tech information about how it was shot or the final digital intermediate - without any HDR grading, The Tax Collector offers only a modest visual improvement in 2160p over its 1080p counterpart. Overall the image looks great, it's well detailed with bold colors and inky black levels. There are several hazy dreamlike moments - early in the film when David wakes up with his wife for example - that come through cleaner and clearer here than the included Blu-ray. After that, the biggest clarity differences are only really spotted in close-ups and middle shots. As gnarly as they are, I felt like I was seeing LaBeouf's cauliflower ears clearer, and the more grotesque makeup effects came through clearer as well. Clothing patterns also come through better - tight lines had some banding in 1080p that isn't apparent on this disc.

Black levels are a little better resolved here, image depth is a little more appreciable. There are several shots that look like they were captured with low-res body cams or GoPros that come through cleaner as well maintaining that sense of depth just a bit better than the 1080p presentation. Colors are on point, the film basks in yellow/gold with reds and blues only popping during a few dynamic sequences. All in all not bad, but like any 4K disc without HDR, the benefits of the format are subjective and not always easy to spot. There's enough going for it to call this the superior presentation. 4/5

On Blu-ray, The Tax Collector rolls along with a pleasing 1080p transfer. Details are overall strong throughout the film. There are a few sequences where things become intentionally hazy dream-like, when David wakes up with his wife is an example where details just don't pop as well, but it's an intentional look. Colors favor yellow/golden tones throughout with reds and blues only enjoying intermittent pop. Blood gets a nice crimson color.

Black levels are a bit on the hazy gray side. A lot of this is due to photography, but compared to the 4K UHD disc, even without HDR that disc appeared to have stronger more balanced black levels with a greater sense of image depth. A lot of the time with this 1080p disc, the image can feel flat. The hazy imagery doesn't help that aspect but the 4K disc also handled it better. The other issue with this transfer compared to the 4K disc is banding. Clothing patterns and tight lines exhibit more banding. Overall this is a pretty good transfer but side-by-side with the 4K UHD disc, there are enough subtle differences to give that presentation the edge. 3.75/5

The Tax Collector arrives with an overall solid and immersive DTS-HD MA 5.1 audio mix - with a slight dialog clarity problem. Most of the time, dialog is crystal clear and never any issues. However, there is more than one sequence where people are speaking in hushed tones that it becomes very difficult to hear what is being said at a normal listening volume. The final moment where David is talking to Wizard and we see who is actually playing him - Wizard's dialog is practically inaudible. I had to turn on the subtitles just to get the required "ah-ha" moment of its dramatic weight. Aside from that finale and those couple other moments the rest of the track is great. Action sequences provide some intense gunfire exchanges. Atmospherics do a great job, and there's some nice bass rumble in the subs to get the LFE blood pumping.

Bonus features are light on the behind the scenes materials but offer up some deleted materials. At only 12 minutes, they don't really help the film feel more "complete" but if they were left in it might have helped the pacing and allowed some scenes to breathe a little. Especially the Judo scenes which felt tacked in as an "oh by he way he knows Judo and that'll help him later…" moment. Here, there's some wight to the sequence and how it relates to David's personality. It's short but it fleshes him out - the movie could have used more of that.

The Tax Collector is the kind of movie that I wish the final product was better than it was. I was genuinely enjoying the first half of the film. It wasn't amazing but it didn't seem as bad as first reviews pegged it. Then it went south - hard. An epic crime film should actually be epic. The last half is an unfocused mess with an overly simplistic and convenient conclusion that shortchanges the opening material that actually worked well for itself. David Ayer is a better filmmaker than this and The Tax Collector feels like there was a better movie planned that didn't make the final cut.

RLJ Entertainment gives The Tax Collector a decent 4K UHD Blu-ray release in an exclusive 2-disc SteelBook from Best Buy. Without HDR the overall picture improvements aren't readily apparent but with some side-by-side disc flipping, the improvements in details, image depth, and compression issues become a little more obvious. If you need to have this one in your collection, the 4K set is the way to go. If you're a curious discerning customer and aren't sure about the movie itself - rent it first. Otherwise, this set is Worth A Look.