The same filmmakers who brought us the deliciously thrilling Train to Busan follow its success with Peninsula, sadly abandoning the brilliance of its predecessor in favor of bigger zombie mayhem over a strong plot littered with woefully laughable, saccharine-rich tropes. The South Korean actioner crashes into the 4K Ultra HD harbor with an excellent Dolby Vision HDR video, an outstanding Dolby Atmos soundtrack and a forgettable set of bonuses. In the end, the overall UHD package is Worth a Look for the most daring and curious among us. 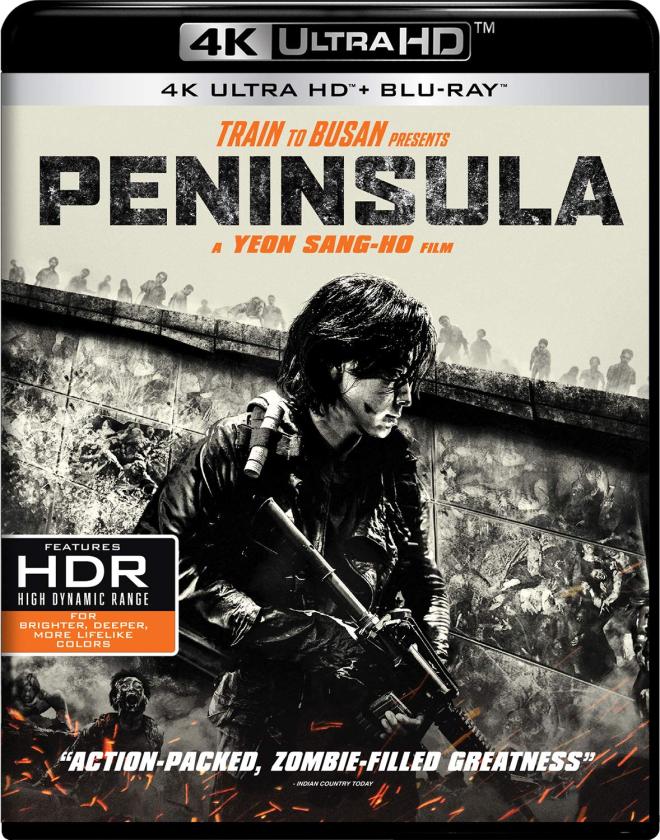 Not long into Peninsula, the new sequel to the wildly popular South Korean zombie actioner Train to Busan, it becomes abundantly clear that this is not a direct follow-up of average citizens trying to survive a viral outbreak that transforms the infected into violent, raging cannibals. From the same duo that brought us the cleverly entertaining 2016 horror film, Park Joo-Suk and Yeon Sang-ho, the plot is set within the same universe as the first movie but picks up four years after the devastation, imagining the abandoned country as an apocalyptic wasteland where the few remaining survivors are starting to grow insane. A guilt-ridden, former soldier Jung-seok (Gang Dong-won) is hired to retrieve a food truck containing $20 million. And so, this is where we see the story quickly derailing from the excellence of its predecessor, ultimately arriving at the end of the line like a typical, mediocre zombie flick.

Suffering from a horrible case of "Sequelitis," the filmmakers pretty much abandon everything that made the first movie a genius piece of entertainment, not only by going bigger and louder but also by ditching a plot that centers around well-rounded, sympathetic characters. Granted, the script concentrates on a small number of survivors the audience can either cheer for or hiss at with disdain, particularly Sergeant Hwang (Kim Min-jae). However, instead of being shown these characters slowly emerging as opposing forces with unique motivations, which is part of Train to Busan's brilliance, we are blatantly told outright without even the slightest hint of ambiguity. Either a person has gone insane in a matter of four years, living in a military compound run by the cynical Captain Seo (Koo Kyo-hwan), or they are the sugary sweet member of Min-jung's (Lee Jung-hyun) family surviving on their über-goodness and cuteness.

Basically, the story is largely ensembled of boringly generic, cookie-cutter characters with predictable fates to the same yawn-inducing conclusion, be it Seo's right-hand loyalist and curator of Unit 631 (Kim Kyu-baek) or Min-jung's wannabe-military father (Kwon Hae-hyo). The latter of which we are hammered into believing is slowly losing grip with reality as he wastes his time supposedly radioing and orchestrating a rescue with the possibly imaginary Major Jane. Within minutes, it's easy to see who is destined to make it to the end, almost as if each walks around with a large, spraypainted number on their face, so for Jung-seok's mousy brother-in-law (Kim Do-yoon), we're watching the clock until the inevitable. In the end, everyone is simply working in the service of Jung-seok's redemption, especially the two young siblings (Lee Re and Lee Ye-won), a pair of self-taught racecar drivers straight out of a Gran Turismo or Need for Speed videogame.

The genius of Train to Busan is not only a story that subverts genre tropes and expectations, but it is also the plot's cleverly subtle sociopolitical commentary fueling the action and suspenseful visuals. It is a small, self-contained film with a singular purpose that felt fresh and new at the time. Peninsula, on the other hand, dumps the smarts into the Yellow Sea in favor of predictable popcorn familiarity, largely powered by banal clichés and hackneyed plot beats, raging madly towards a laughably-bad slow-motion ending infected not remotely close with the same level of anxiety-ridden thrills as its predecessor but rather, an overabundance of trite sentimentality. Admittedly, the loosely-connected sequel features some amusing minor twists here and there, the street chase at the end of the second act and the zombie fight club being notable highlights. But much of it nonetheless feels as though borrowing heavily from other sources while dead-like trudging along to a conclusion that won't surprise anyone.

Well Go USA Entertainment brings Peninsula to Ultra HD Blu-ray as a two-disc combo pack. The dual-layered UHD66 disc sits comfortably opposite a Region Free, BD50 disc inside a black, eco-elite vortex case with a lightly-embossed slipcover. At startup, the disc goes straight to a static menu screen with the usual options along the bottom and music. 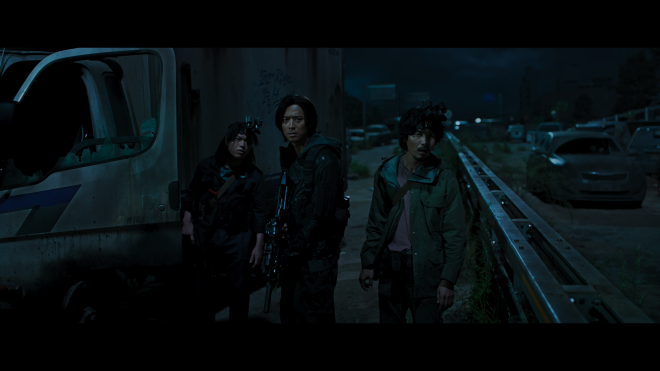 The horror sequel crashes to Ultra HD with a lovely, often impressive HEVC H.265 encode, giving fans an excellent step-up over its day-and-date Blu-ray partner. Coming directly from a digital source, the freshly-minted 4K transfer enjoys a notable uptick in definition and clarity. We can better make out the rust and grime coating the interior of Unit 631's compound, the fine lines and stitching in everyone's dirty clothing and each individual hair of the cast. It's not a significant jump, brought down a few notches due to some odd soft moments and the many CG action sequences, but the video is definitely sharper on average. The same can be said for contrast, showing a slight but still noticeable boost and showering many sequences in vividly bright, crisp whites. However, specular highlights don't appear to have changed much, looking fairly similar to its 1080p brethren on the whole except for the sunset and sunrise moments where the brightest areas seem a tad tighter and better

Notwithstanding, the Dolby Vision HDR presentation nonetheless delivers a few stunning improvements, starting with richer, inkier blacks from start to finish, providing the 1.85:1 image with appreciable dimensionality. In fact, there is significantly better visibility and shadow detailing in the nighttime sequences, exposing every nook and cranny of the city streets, the zombie arena and the many poor-lit interiors. Best of all, Lee Hyung-deok's cinematography is swimming in richly-saturated, bolder primaries, especially the reds that beautifully range from the zesty cherry of clothes and lights to the deep garnet and ruby of blood. Most eye-catching is a spirited, fuller array of secondary hues, bathing several scenes in hot pink, prominent purples, fiery oranges and warm yellows while revealing facial complexions appear more natural and peachier than its HD SDR counterpart. (Dolby Vision Video Rating: 82/100) 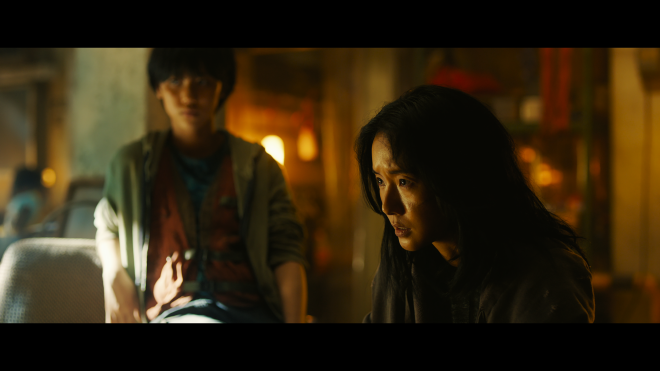 The undead heist flick also comes equipped with an outstanding and strapping Dolby Atmos soundtrack that appreciably widens and broadens the action visuals.

For a good chunk of the runtime, the character-driven movie is more of a front-heavy presentation with sterling, precise dialogue reproduction and excellent, fairly extensive dynamic range. Background activity distinctly and fluidly travels between the three front channels with several ambient effects subtly bouncing into the top heights, creating an awesomely engaging half-dome soundstage. The surrounds and ceiling channels are employed often with the echoing of growling zombie hordes and the revving engines racing through the empty streets. Several action sequences also effectively circle the listening area with the screams of panic reverberating all around or the noise of airplanes and helicopters flying overhead. Most surprising is a potent and vigorous low-end that adds a palpable weight and presence to the gunfire, the car chases and the explosions, making for an excitingly fun creature-feature. (Dolby Atmos Audio Rating: 88/100) 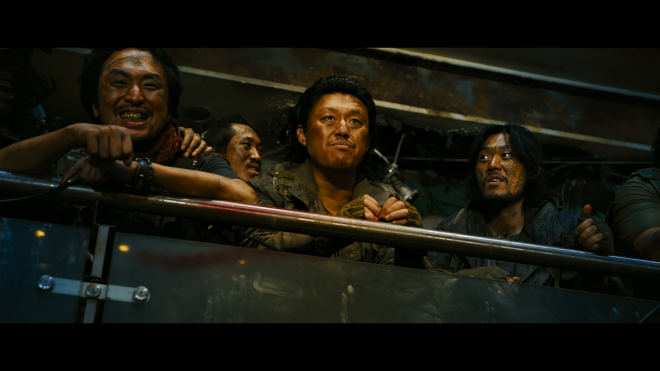 The same set of supplements are shared with its Blu-ray counterpart. 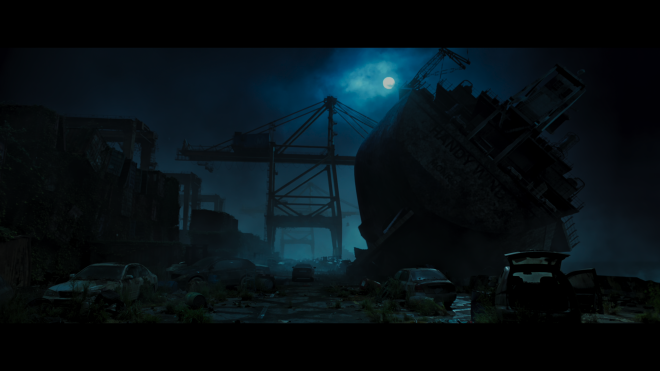 Known in the U.S. as Train to Busan Presents: Peninsula, the highly-anticipated sequel sadly suffers from a horrible case of "Sequelitis," abandoning pretty much everything that made its predecessor a brilliant zombie thriller. Favoring visuals and action over substance and a strong narrative, the same filmmakers heavily borrow from other zombie flicks to deliver a rather dull story driven by an eye-rolling, saccharine-rich center that's more woefully laughable than tearfully poignant. The South Korean actioner crashes into the 4K Ultra HD harbor with an excellent Dolby Vision HDR presentation that nicely improves upon its Blu-ray counterpart and equipped with an outstanding Dolby Atmos soundtrack. Bonus features are sadly lacking, making the overall UHD package only worth a look for the most curious.