Inspired by South African history, Neill Blomkamp's brilliant sci-fi actioner District 9 remains an insightfully weighty and poignant allegory on systemic oppression and xenophobia. The sci-fi favorite crash lands on Ultra HD with a gorgeous 4K HDR10 video, a reference-quality Dolby Atmos track but an average set of bonuses. Nevertheless, the overall UHD package is Highly Recommended and makes for an excellent addition to the library. 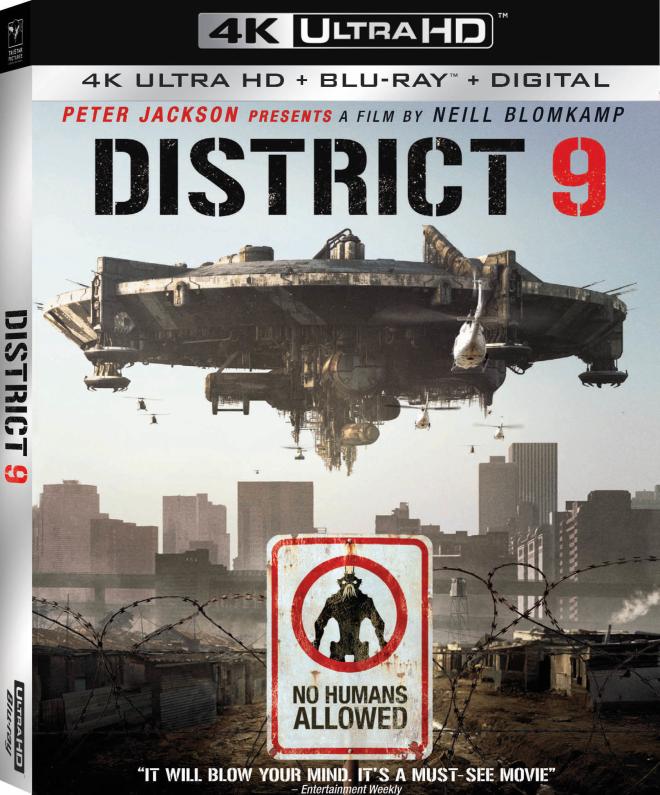 A decade later, Neill Blomkamp's inventively brilliant District 9 remains a masterfully told sci-fi tale that works equally as an action-packed, popcorn spectacle as well as a penetrating, thought-provoking allegory on systemic oppression. Inspired heavily by South Africa's history of apartheid and racial segregation, the central plot revolves around the bumbling, ready-to-please MNU bureaucrat Wikus (Sharlto Copley). Armed with a military-like force on his side and sanctioned by the government, Wikus' attempts to relocate — somewhat forcefully — nearly two million malnourished aliens to what is essentially a concentration camp is quickly viewed as coming from a position of privilege. His interactions with the derogatorily-labeled "Prawns" comes with a tinge of xenophobia but a blatantly bigoted conviction, so his metamorphic journey becomes one of understanding and change.

Fascinatingly, some characters use language that contemporary audiences will think sounds interestingly familiar. They talk about the aliens as foreigners and refugees with phrasing that almost suggests they are not bringing their best — one even refers to the aliens essentially as laborers without leadership and that they only know how to follow orders. When Wikus is labeled a fugitive, there is also a sense that this society views the aliens as carrying disease and bringing violence. It all makes for a more captivating and profoundly relevant film that continues to entertain viewers.

Sony Pictures Home Entertainment brings Neill Blomkamp's District 9 to Ultra HD Blu-ray as a two-disc combo pack with a flyer for a Digital Copy, which can be redeemed via sonypictures.com and Movies Anywhere. When redeeming said code, users are granted access to the 4K Dolby Vision version with Dolby Digital Plus 5.1 audio. The dual-layered UHD66 disc sits comfortably opposite a Region Free, BD50 disc inside a black, eco-elite vortex case with a glossy slipcover. At startup, the disc goes straight to a static menu screen with the usual options along the bottom while music plays in the background. 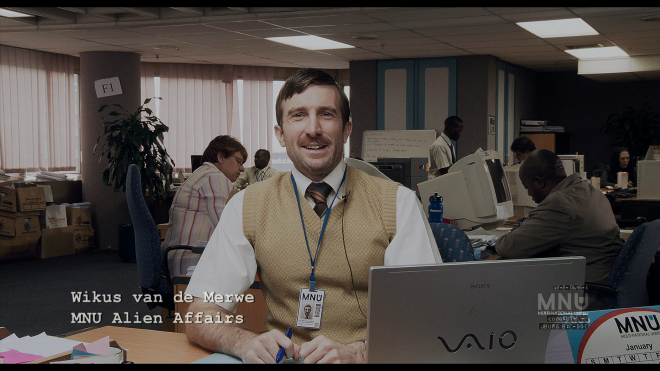 The sci-fi favorite steers its way to Ultra HD with a better than initially expected picture quality thanks to an outstanding, often-stunning HEVC H.265 encode, offering fans some appreciable upgrades over its Blu-ray counterpart.

Although coming from a 2K digital intermediate, the upscaled transfer shows a welcomed uptick in overall definition, maintaining excellent resolution levels from start to finish. Viewers can clearly make out the tiniest imperfection and rust spot in the various structures throughout the shantytown, and every detail in the bodies of the CG aliens is distinct. However, the movie was shot on a combination HD digital cameras limited to 1080p and the Red One camera capable of up to 4K resolution, so a bit of fluctuation in the 2160p picture is to be expected. Aside from several soft moments and a few poorly-resolved sections, there are also many instances of mild aliasing. Thankfully, none of the issues take away or distract from the overall quality and enjoyment but amazingly feel as though a natural element of the movie.

On the other hand, the avant-garde, documentary-style aesthetic of the production does affect the color gamut, which strongly favors more subdued and controlled secondary tones. Of course, this is the filmmaker's intentional look, and this HDR10 presentation is faithful to that. The earthy browns, yellows and oranges throughout are definitely fuller and bolder with more variety in the tans, supplying the action with an attractive sepia appeal that feels right in line with the production's visual style. Meanwhile, primaries enjoy a nice boost although the selection is somewhat limited. Beneath the heavy teal hue of the cinematography, the dirty crimson red of Christopher's jacket has a lovely pop, and the few bits of foliage are a deep, emerald green.

Ultimately, the big win and most striking metamorphosis in this 4K edition is the improved contrast, showering the action with vivid, resplendent whites throughout. Wikus' button shirts are a bit more dynamic and cleanly rendered, but the clouds in the many outdoor sequences burst with intensely dramatic energy, furnishing the film with a nice fresh and rejuvenated feel. Naturally, specular highlights are the most eye-catching as the hot sunshine glistens off the mothership and various other metallic surfaces with a realistic radiance while explosions, electrical sparks and lights from monitors display a tighter, narrower glow, exposing more of the finer aspects. Likewise, black levels appear richer and more accurate than before with dark, velvety shadows maintaining outstanding visibility, bathing the 1.85:1 image with strong dimensionality and a lovely cinematic appeal. (Video Rating: 88/100) 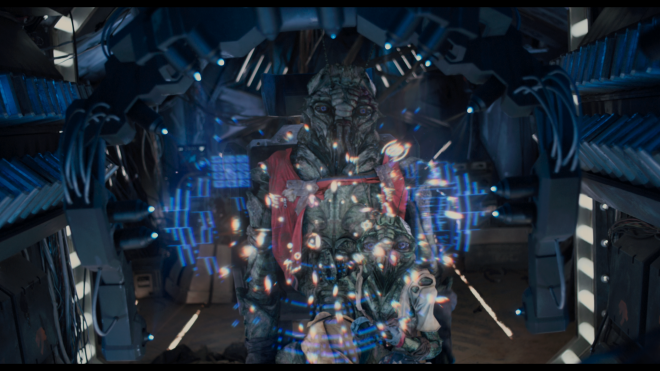 Although it starts somewhat quietly, which is expected given the film's documentary-style aesthetic, the object-based track nonetheless comes with a phenomenal soundstage as background activity subtly spreads across the fronts and top heights, creating a highly-engaging half-dome wall of sound. Naturally, entering District 9 is when imaging suddenly expands and feels more spacious, as a variety of noises fluidly pan between all the channels with an incredible sense of realism and fidelity. With outstanding directionality and placement, an extensive mid-range displays remarkable clarity and distinction with sharply-defined, room-penetrating highs and extraordinarily detailed mids in the ear-piercing visuals. Only gripe is the vocals occasionally being drowned out by the loudest, action-packed carnage, but otherwise, character interactions remain intelligible for most of the mayhem.

As mentioned above, the entire system truly comes alive as we enter the shantytown with the rattling of armored vehicles, the air blowing through foliage and the reverberation of engines rumbling through the dirt roads. Many of these elements faintly but still audibly echo into the height channels with an effective sense of space that immediately envelops the listener. The best moments are when helicopters convincingly and flawless pan directly overhead while a variety of subtle atmospherics bounce through the surroundings for a terrifically-layered, true-to-life envelopment. Things only continue to impress when the action erupts on screen in the second half, crowding the room with the chaos of cars crashing everywhere, the debris of explosions rain down and bullets whiz by in every direction. It's a fantastic, immersive experience and spectacularly maintains a hemispheric soundfield.

Topping it all off is a sensationally powerful and unexpectedly robust low-end, providing the action with a room-energizing weight and a serious palpable presence that occasionally digs hard at 22Hz with subwoofer-damaging decibels (bass chart). (Dolby Atmos Audio Rating: 96/100) 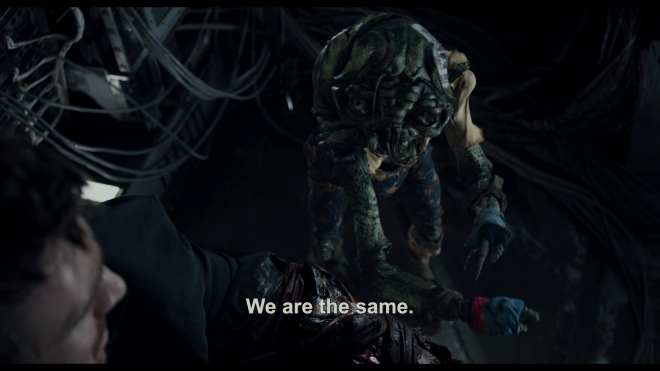 The same set of supplements on the accompanying Blu-ray disc joins a trio of new extras exclusively available on the Ultra HD disc. 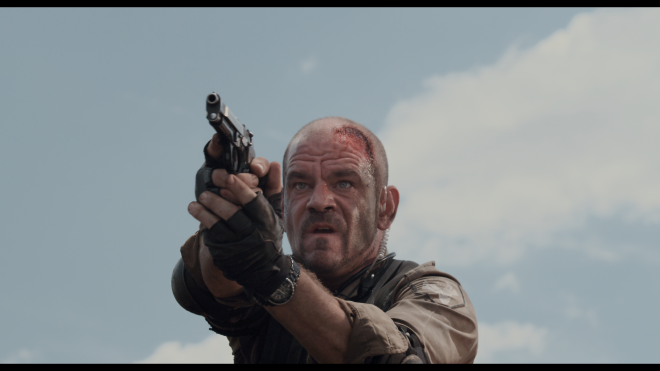 Taking a chapter from one of the darkest periods of South African history, Neill Blomkamp's District 9 is an insightfully weighty and masterfully told tale that remains just as entertaining a decade later. In fact, the inventively brilliant sci-fi actioner continues to surprise and feels all the more relevant and poignant today with its allegorical plot on systemic oppression and xenophobia. The sci-fi favorite crash lands on Ultra HD with an impressively beautiful 4K HDR10 presentation and a top-notch, reference-quality Dolby Atmos soundtrack, besting its Blu-ray counterpart. Although it doesn't really offer any new supplemental material to boast about, the overall UHD package is nonetheless highly recommended.