Hocus Pocus charms its way to 4K UHD with HDR10 with the same DTS-HD MA 5.1 audio track and extras from the previous Blu-ray release. Three evil witches come back from the dead some 300 years later to complete their mission in killing children in order to keep their youth through a series of misadventures and thrills in this Disney film. Still Recommended all these years later. 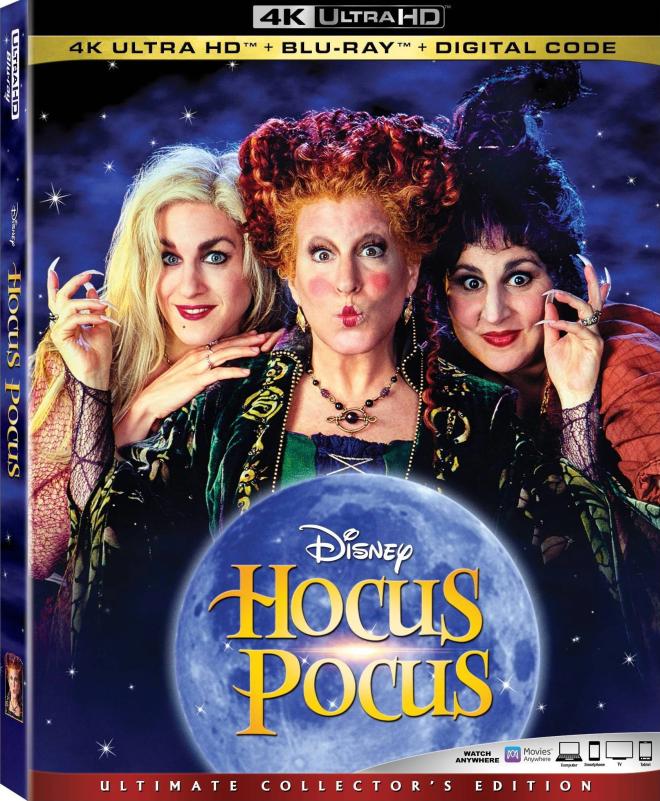 It’s hard to believe that Hocus Pocus has been out for 25 years and has a strange story behind it in that it’s a Halloween film from Disney that was released in the middle of Summer in 1993 against the movie Free Willy. It stood no chance whatsoever and only made a little bit more box office money than its budget. That being said, over the past two decades, Hocus Pocus has become a strong cult film amongst adults and kids alike where cosplayers and fans celebrate this movie still to this day with giant fandom. Say what you will about the movie itself, but it’s always impressive when a film that was virtually disliked by every critic and had an unsuccessful financial run when it came out - that has stood the test of over two decades and become a cult-icon that continues to make money. Needless to say, there was a magical spell of good fortune released onto this movie that hasn't been lifted.

The film follows three sisters, all of who are witches in Salem (Bette Midler, Kathy Najimy, and Sarah Jessica Parker), who want to keep their youth forever. In order to do this, they must kidnap and kill the local kids and suck their souls out. They are thwarted and are hung to death, but some 300 years later to the present day (1993), they come back to life to finish their mission.

Back in the early 1990s, Disney took some steps outside of their wheelhouse with a few of their films, one of them being Hocus Pocus, a silly, yet somewhat scary film made for kids. The first few minutes of the film reveals these three witches Winnie (Midler), Mary (Najimy), and Sarah (Parker) have been killing kids and are hung for their crimes. That's not exactly something that Disney would release today. The film skips a few hundred years where a group of 90's kids unleashes the powers that bring back the witches to wreak havoc. With zombies, a precious black cat, and Thora Birch in the spotlight, these three grotesque yet flamboyant witches are no match for a group of witty kids.

Film Director Kenny Ortega (Dirty Dancing, This Is It, High School Musical) and screenwriter Mick Garris (*batteries not included, The Fly 2) teamed up for this oddball comedy and perfectly mixed in some great humor and thrilling scares that are all made possible by Bette Midler's performance as Winnie. Everyone turns in solid performances, but the foundation of why Hocus Pocus works for all ages is because of Midler herself. She completely owns and steals the screen every time she's in front of the camera. She's like a more sinister Willy Wonka, where she seems cuddly, bubbly, and genuine one minute, but turns into a vile and evil witch the next in a flawless 180 turnaround. Her sister witches follow her steps closely and all have their unique qualities to them whether it be a love of food or fashion.

If Hocus Pocus had another production company other than Disney behind it, this would have been a more malevolent film with very little comedy. But since the house with the mouse owns it, there's a family-friendly vibe throughout, which doesn't necessarily make it a bad film, but rather it's own unique creation where musical numbers pop up, and theatrical sets are abound with these iconic characters. Hocus Pocus casts a level 5 charm spell on all who watch still to this day.

Hocus Pocus sweeps its way to 4K UHD with HDR10 in a 2-Disc 4K Ultra HD + Blu-ray + Digital Copy. The discs are housed in a standard black 2-disc 4K UHD case with identical slipcover artwork. There is an insert for a digital copy. 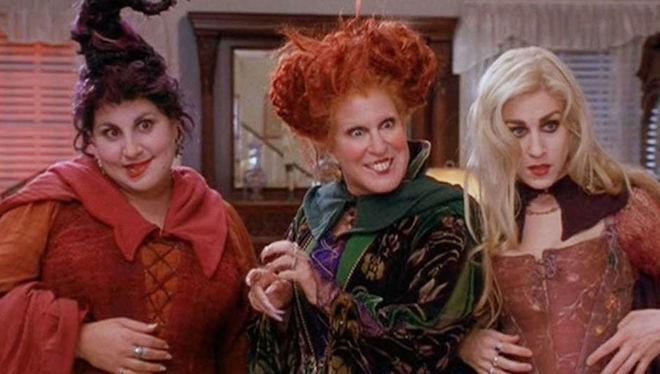 Hocus Pocus casts its way to 4K UHD with a brand new 2160p UHD transfer with HDR10 from Disney in a 1.85:1 aspect ratio. This image is a different look than its 1080p Blu-ray counterpart in terms of color and detail.

The film's visual tone in 4K has gotten a lot darker. Both well-lit interior and exterior sequences are now a few shades darker than they were before with lower lit scenes and nighttime sequences having almost a pitch-black look. Colors are hindered here due to this lighting change where bright primary colors that once popped with vivacity now have a much more muted palette. Luckily the HDR kicks in and boasts the fall color spectrum of orange, brown, purple, and Halloween green from time to time. It's just not as bright or bold from previous releases. That's not to say the transfer is ugly or bad, but rather a personal preference for each individual on how someone enjoys watching a movie. The case here will be a darker than usual image with some wonderful looking autumn colors sprinkled in. Black levels are intense and inky throughout giving way for some excellent shadows and dark creepy spaces in spooky sequences. Skin tones are natural as well, but again - everything is on the dark side of the spectrum here.

The detail is enhanced a bit as well with some vivid and sharp detail, revealing some excellent practical makeup effects on the witches, such as long hairs, moles, and undead makeup that showcase bones, rot, and muscles. The CGI still looks good for the time and even in this darker scenario, the visual effects still come through nicely. Textures in the costumes and other facial features on the kids all look fantastic as do the background sets, offering a crisper feel and look to them. There are no major flaws with the video here, but rather a quite spectacular vision quest of horror and comedy with a darker visual appeal that makes the film seem moodier than it is. 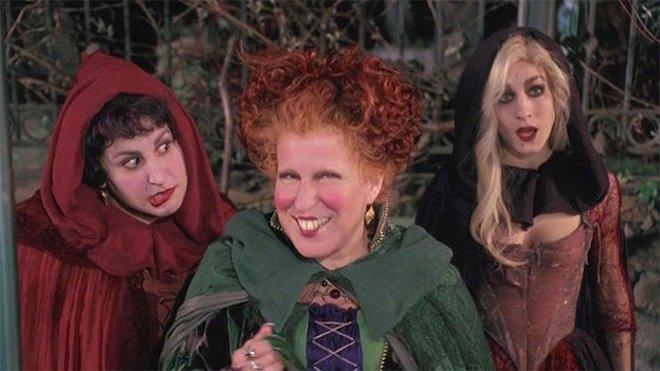 Disney decided not to add a new Dolby Atmos mix or 7.1 track to the film but instead imported the very good lossless DTS-HD MA 5.1 audio mix again, which is still great. It would have been fun though to hear the thunder, lightning, and witches flying everywhere on the overhead speakers this time. But instead, give the original audio mix a read HERE. 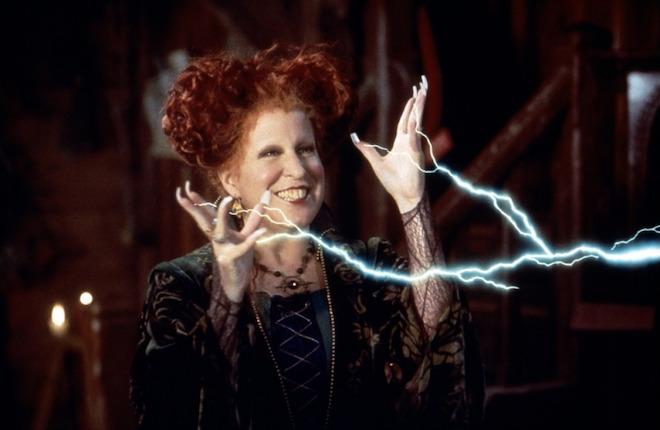 The 4K Disc does NOT contain any bonus material, but the Blu-ray has the two previous bonus features imported over, which for fans of the film, are quite amazing. 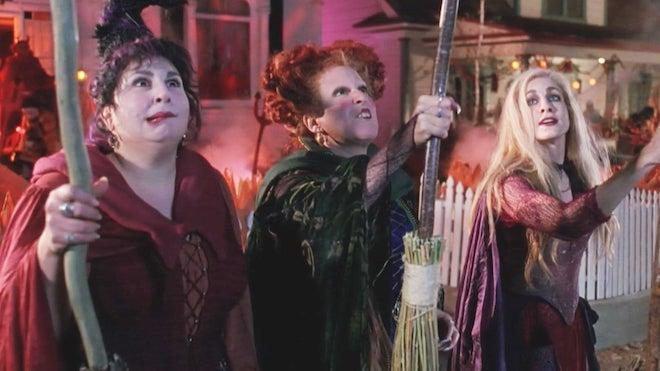 Hocus Pocus still stands the test of time, giving people a glimpse of how Disney tested the waters with horror and comedy. It's still a fun film with great effects, and superb performances, along with some good thrills. With a good looking, darker image and the same wonderful DTS-HD 5.1 audio mix, along with the previous extras, this 4K release is still an uptick from it's Blu-ray counterpart. Recommended!