The pursuit of perfection isn’t easy. Talent is the least of it - a lot of people have that. What separates the wheat from the chaff is a laser focus, undying commitment, and an inner drive that won’t allow the body and mind to quit, even when they’re pushed well past their breaking points. Guts are required, too, but can only take a person so far. Often a mentor makes the difference, inspiring one to always reach for more, never become smug or complacent, and forever fight the adversity lurking around every corner. The finest motivators are usually strong and a bit imposing. Some are noble, some are nurturing, some adopt a tough-love approach, and some are just plain pains in the ass, but most know how to wring from those they counsel that extra ounce of greatness that will set them apart and set them on a course that will give them at least a fleeting shot at success.

Whiplash is all about that complex, often dysfunctional and adversarial relationship, and the mind games and ego-bruising that in some cases define it. It’s about the evolution of an artist, the shaping of a human being, and how the controversial tactics of one man either stoke the spirit or break it. Writer-director Damien Chazelle’s electrifying film broadcasts a refreshing message to a society that increasingly rewards mediocrity and advocates a false sense of self-esteem. Think of this... Does every member of the last-place five-year-old soccer team deserve a trophy? Should we hand out certificates and plaques to those who try hard, even if they achieve nothing? Will such easy praise fuel their moxie and instill in them the grit and pig-headedness necessary to scale the heights of their chosen profession? 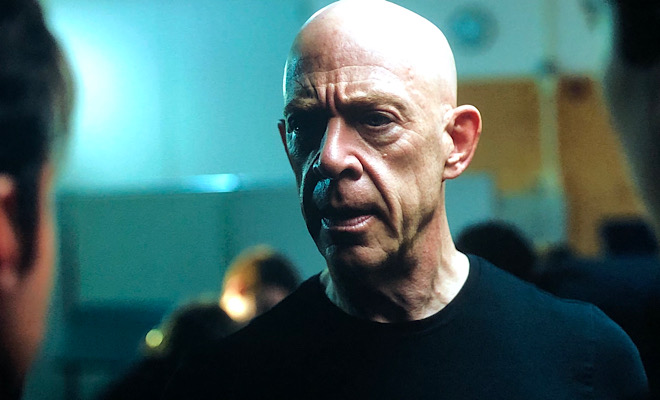 Music teacher and jazz band conductor Terence Fletcher (J.K. Simmons) says no. (Actually, he’d put an expletive before the “no,” but in the interest of good taste I will omit it.) Fletcher, who works at the rarified Shaffer Conservatory of Music in New York City, has no patience for average joes who lack the courage of their convictions. His sole purpose is to “push people beyond what’s expected of them” to achieve results and make them the best they can possibly be. “There are no two words in the English language more harmful than good job,” he says, and though he physically and mentally assaults his pupils and his reprehensible conduct often seems exaggerated for shock value, his words ring true.

Young drummer Andrew Neiman (Miles Teller) respects him greatly, and when he’s given the opportunity to join Fletcher's esteemed Studio Band during his first year, he jumps at the chance. Neiman lives and breathes drumming - he practices round the clock, worships the legendary Buddy Rich and Gene Krupa, and constantly listens to jazz CDs - yet his immense talent, dedication, and slightly superior attitude don’t impress his peers, all of whom possess the eye of the tiger and brandish a formidable fierceness, arrogance, and deep competitive streak more akin to athletes than instrumentalists. And on their playing field - the concert stage - each musician must be in tip-top mental and physical condition or suffer serious consequences.

That’s tough to do with a taskmaster like Fletcher, who doles out abuse like the Peace Corps doles out CARE packages to the hungry, driving his students to tears, despair, and worse. With an almost maniacal relish, Fletcher berates, slaps, browbeats, sexually harasses, curses, and ridicules them, and all his blows land way below the belt. In a rehearsal hall that each and every day evolves into boot camp, he’s the drill sergeant, joining the ranks of such legendary bullies as Sgt. Foley in An Officer and a Gentleman and Gunnery Sgt. Hartman in Full Metal Jacket. Neiman struggles valiantly to both survive and prosper, yet the constant stress of Fletcher’s impending wrath coupled with his own encroaching self-doubt continually drag him down, forcing him to muster all his strength to fight the demons that test his mettle, confidence, and commitment.

Chazelle knows his subject well. The film is loosely based on his own experiences, and his sharp, Oscar-nominated script clearly and concisely gets its point across. Whiplash isn’t complex, despite putting a topic on the table that will surely inspire debate. It’s beauty lies in its directness. Like the charts the band plays, it’s clean, crisp, and tight. And with the same tempo as a jazz riff, it moves. There’s a pleasing rhythm to this piece - like the beating of a drum - that keeps the viewer engaged, most of it emanating from Tom Cross’ Oscar-winning editing. Coupled with Chazelle’s keen eye, the film conveys a wealth of subtle information in a swift, economic manner that’s a joy to behold. (It’s amazing to think the picture was shot in only 19 days for a cost of a little more than $3 million.)

Simmons won an Oscar for his pitch-perfect portrayal of the vociferous, in-your-face Fletcher, a guy you can’t help but hate, yet who engenders some grudging admiration for his sound beliefs. Simmons is fascinating to watch, and - clips notwithstanding - his performance is far more than a symphony of bellowing. Finely etched and smoothly delivered, his work never strikes a sour note, nor does that of Teller, who carries the film with an equally captivating portrayal. Neiman is run through the wringer, yet Teller never overacts; even during scenes of heightened intensity, he’s disarmingly natural. His expressiveness lends his character extra depth, and his virtuoso drum playing dazzles the senses and adds essential realism to the movie.

Unfortunately, a couple of minor plot points don’t ring true and prevent me from lavishing Whiplash with unqualified praise. But I still love this movie for its presentation, performances, and for what it says about excellence and our society’s reluctance to do what it takes to achieve it. Sure, Fletcher goes too far, but you gotta push those boundaries to find the limitations. At its core, Whiplash is about where to draw the line, what cost we’re willing to pay to achieve our dreams, and what triggers must be activated to spur us on. It’s brash and brutal, a worthy Best Picture nominee, and a great warm-up for Chazelle's more ambitious yet equally stunning La La Land. 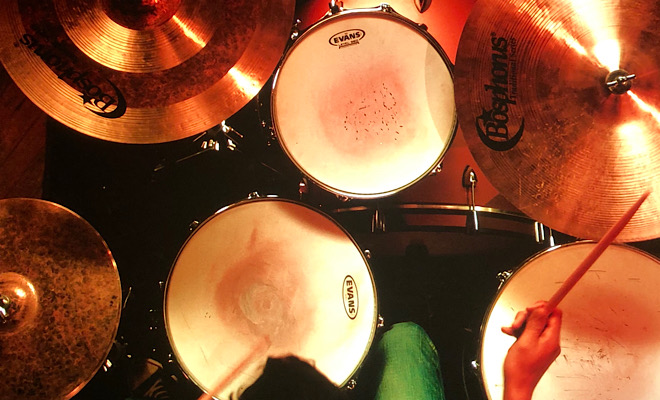 Whiplash arrives on 4K UHD Blu-ray packaged in a standard case. A leaflet with a code to access and download the movie's digital copy is tucked inside the front cover along with a standard Blu-ray disc. Video codec is 2160p/HEVC H.265 and default audio is Dolby Atmos. Once the disc is inserted into the player, the static menu without music immediately pops up; no previews or promos precede it.

Digitally photographed in HD, Whiplash has always looked crisp, sleek, and bold, but the addition of HDR significantly elevates the viewing experience. Sony’s 2160p/HEVC H.265 transfer makes Whiplash even more immersive, offering a richer, warmer, sharper, and more vibrant picture than the 2014 Blu-ray. Overall contrast and clarity have received a notable boost, and details truly pop. The black ink on the sheet music juxtaposed against the white fibers of the paper create a vivid contrast, the marks on Teller's face appear more pronounced, and the close-ups of the CD jewels cases, sweat-dotted cymbals, gleaming brass, and Andrew's bloody battle wounds are breathtakingly sharp. The splashes of color, most notably red, make more of an impact, blacks are deeper, and shadow delineation seems a tad more distinct. 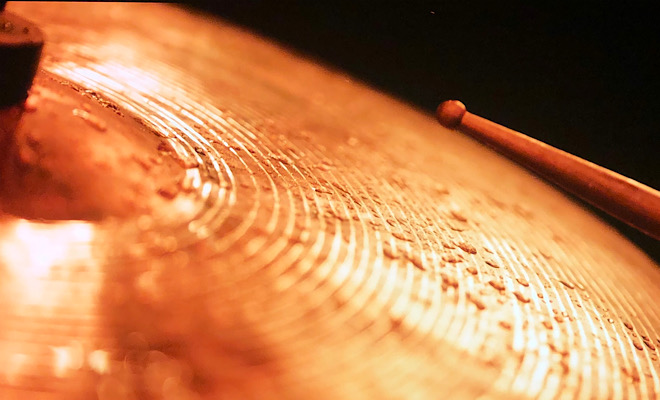 Whites are crisp, but Andrew's T-shirt blooms just a bit during the early scenes, and the slight haziness that afflicted low-lit scenes on the Blu-ray remains. The warm glow Chazelle often slathers across his practice scenes occasionally produces orangey flesh tones, but that's offset by the marvelous close-ups that highlight such fine facial features as stubble, pores, scars, eyelashes, creases, and wrinkles. Simmons' bald pate is just as shiny as ever, but his laser glares seem to penetrate more deeply. Not a stitch of grain, no noise, and nary a stray mark creep into the pristine source.

If you're a Whiplash fan, you'll definitely want to upgrade to this very satisfying 4K UHD HDR presentation.

The Dolby Atmos track provides a subtle upgrade from the already excellent DTS-HD Master Audio 5.1 track on the previous Blu-ray, which is also included on the 4K UHD disc. Like the DTS-HD track, the Atmos mix provides perfectly balanced, properly modulated sound that bursts with an organic purity of tone. Not surprisingly, the audio becomes a vital character in the drama, and during the music sequences every instrument receives its due. Sure, the drums and cymbals take center stage, but the tight strains of screaming brass, silky tickling of the piano keys during Fletcher’s club solo, and warm, smoky accents of bass all combine to create a beautifully integrated, fully enveloping soundscape that was justly honored with the Best Sound Mixing Academy Award.

Marvelous nuances abound, from the snapping of instrument case clasps and clicking of drumsticks to subtle bits of tuning before rehearsals and the shuffling of sheet music. Stereo separation across the front channels is top-notch, but the Atmos mix still lags with regard to surround activity, which was disappointingly slim on the DTS-HD track as well, and distinct overhead effects are non-existent. The car crash impact is quite impressive from a rear channel perspective and the enveloping nature of the music gets a boost from the Atmos platform, although there's still not enough acoustic variation between the practice room and concert stage. The same hints of distortion that plagued the DTS-HD track are here as well, and only a few muffled phrases cloud the generally clear and comprehendible dialogue.

Though it doesn't deliver the pow I craved, this Atmos mix nevertheless supplies dynamic, nuanced sound. The improvements are slight, so keep your expectations in check, but this upgraded track definitely beats its predecessor.

All the supplements from the previous Blu-ray have been ported over to this 4K UHD release, but they only reside on the included Blu-ray.

Whiplash is a searing study of abuse and perseverance that's stunningly realized by writer-director Damien Chazelle. Much has been written about J.K. Simmons' blistering Oscar-winning performance as a bullying bandleader who strikes terror in his musicians' hearts and minds, but Miles Teller is equally good, fashioning a riveting, honest portrayal of a driven, tortured, and passionate young drummer whose pursuit of greatness leads him on a bruising, soul-searching odyssey that almost destroys him. A relevant message sure to spark spirited debate enhances this lean, mean, masterfully directed production that's both thoughtful and visceral. Much like its Blu-ray counterpart, Sony's 4K UHD HDR presentation features an excellent video transfer, close-to-reference audio, and plenty of interesting supplements. If you're a fan of this Best Picture nominee, you'll definitely want to see it in HDR and hear it in Dolby Atmos.