A movie for passionate movie lovers, Cinema Paradiso celebrates the seductive allure and visceral impact of motion pictures with warmth, humor, and heartbreaking tenderness. The nostalgic, sentimental story of a young Sicilian boy's fascination with film and enduring friendship with a fatherly projectionist who shapes his life will strike a chord with every movie maven, and writer-director Giuseppe Tornatore tackles the tale with insight, grace, and reverence. A splendid 4K UHD Dolby Vision presentation, solid audio, and a fine selection of supplements help this Arrow Academy  edition eclipse all other home video versions of this Oscar-winning classic that deserves a spot on every cinephile's shelf. Highly Recommended.

If, like me, you eat, drink, and breathe movies, Cinema Paradiso will nourish your soul. Writer-director Giuseppe Tornatore's love letter to the flickering images that stoke our emotions, fuel our dreams, and often shape who we are may be almost 33 years old, but it remains a deeply moving film that celebrates the impact of motion pictures on both individuals and the community at large. Though shamelessly sentimental at times, this captivating winner of the 1988 Best Foreign Language Film Oscar viscerally connects with anyone who adores the art of film and supplies a hefty dose of warmth, romance, and nostalgia.

Told in flashback, Cinema Paradiso chronicles the close, enduring friendship between Salvatore "Totò" Di Vita (Salvatore Cascio), a young, movie-mad Italian boy who lost his father in World War II, and Alfredo (Philippe Noiret), the gruff yet caring projectionist at the only theater in the rural Sicilian village in which they live. Alfredo becomes a surrogate dad to Totò, and the two forge a tight bond during countless hours alone in the projector booth. Through thick and thin, they cater to the theater's loyal patrons, who faithfully gather to laugh, cry, gasp, hiss, and dreamily gaze at the stars and stories on the screen. The townspeople also decry the cuts mandated by the puritanical local priest, who previews all the films and forces Alfredo to excise every lascivious action and innuendo.

As Alfredo ages, Totò matures, growing into an attractive teenager (played by Marco Leonardi) who pines like a puppy dog for the seemingly unattainable Elena (Agnese Nano), a beautiful rich girl who resists his attentions. Yet it's Alfredo, along with the movies he endlessly quotes, who wields the most influence over Totò, and his abiding affection for the boy he has nurtured ultimately leads Totò to make a life-changing decision. 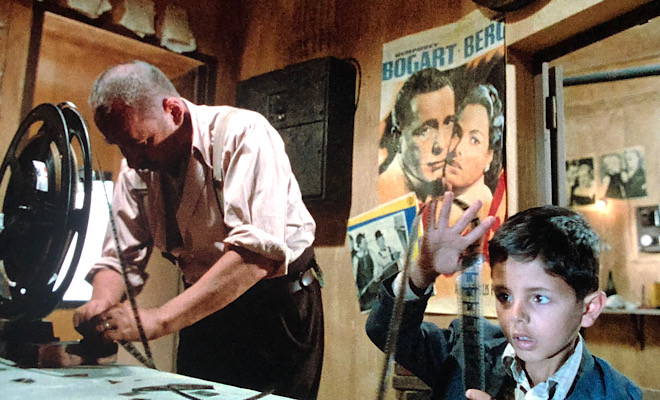 Alfredo and Totò's mutual regard and devotion may propel Cinema Paradiso's narrative, but the relationship between the disparate townspeople and the theater they faithfully attend resonates just as strongly, especially today as we all grapple with the effects and challenges of a global pandemic. I've seen Cinema Paradiso before, but this time, as I watched this lyrical film depict a throng of passionate movie fans continually flocking to a theater to communally share a multitude of cinematic experiences, the images provoked a profound sense of melancholy and longing for an activity that once was such a vital part of our social fabric and is now - at least in many areas of the country - forbidden.

Equally powerful is the implosion of the time-honored theater at the end of the film. The owner blames television and videos for the declining attendance that spurs Cinema Paradiso's demise, but that seems trivial compared to a pandemic that might precipitate the same fate for movie theaters worldwide. Will we ever get back to watching blockbusters in a packed auditorium, clutching the arms of our seatmates, cheering in unison for the hero, and heaving a collective sigh when justice prevails? I sincerely hope so, but until then, the themes and emotions Cinema Paradiso transmits are more affecting, personal, and provocative than ever before.

The film's three-act structure, which depicts Totò at three significant stages of his life, works well, and the 122-minute theatrical cut definitely proves the old adage that less is more. Like Arrow Academy's previous 2017 Blu-ray release, this edition of Cinema Paradiso includes the 174-minute director's cut that expands the segment focusing on the 50-year-old Totò's return to Sicily after a 30-year absence. The previously deleted scenes concentrate too heavily on the romance between Totò and Elena, thus altering the film's tone and our feelings toward the characters. Some might appreciate the extra information, different perspective, and narrative closure, but I prefer the theatrical cut's ambiguity, which heightens the story's emotional impact. 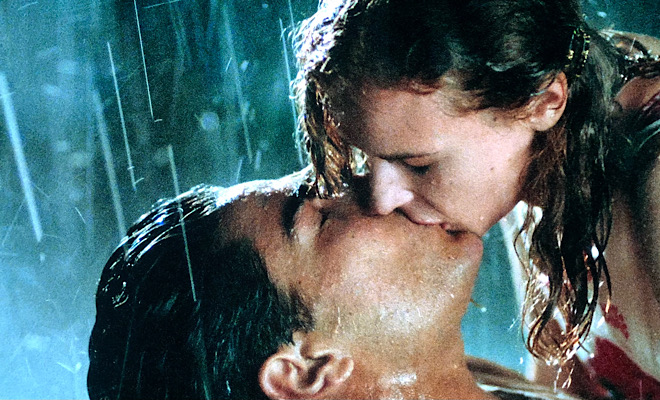 The film's inspired use of snippets from an array of classic American and foreign films, especially during its memorable closing minutes, salutes the universal magic of motion pictures and makes Cinema Paradiso even more relatable for diehard movie mavens. On its own, the relationship between Alfredo and Totò is touching enough, but adding movies to the mix injects a mystical element that further connects us to both characters and allows us to see ourselves in them.

Some might dismiss Cinema Paradiso as a traditional coming-of-age tale or schmaltzy trip down memory lane with a little bit of Thomas Wolfe's You Can't Go Home Again thrown in, but if you're a true aficionado of film, Tornatore's movie will work its way to your inner core and remind you why you've spent so many blissful hours dreaming in the dark. Movies are a powerful medium, and Cinema Paradiso pays tribute not only to their artistry and influence, but also our willingness to fall under their hypnotic spell over and over and over again. 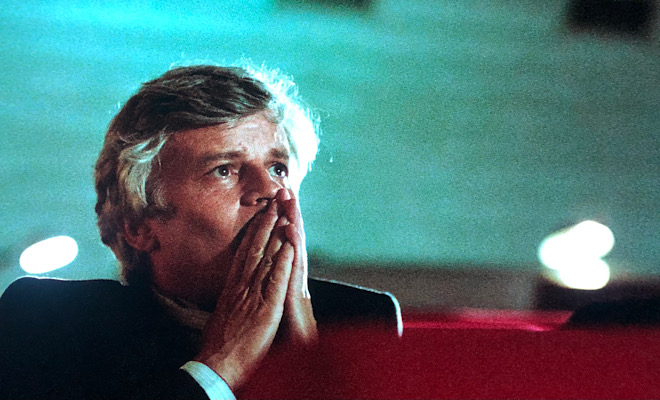 Cinema Paradiso arrives on 4K UHD Blu-ray packaged in a standard case inside a sleeve. The 122-minute theatrical cut of the movie, presented in UltraHD (Dolby Vision/HDR), resides on Disc 1, while the 174-minute director's cut, presented in 1080p, resides on Disc 2. A beautiful 28-page booklet, featuring an essay by film writer Pasquale Iannone, an array of color scene shots, cast and crew listings, and transfer notes is tucked inside the front cover. Video codec for the 4K UHD disc is 2160p/HEVC H.265 and default audio is DTS-HD Master Audio 5.1. Once the disc is inserted into the player, the full-motion menu with music immediately pops up; no previews or promos precede it.

According to the disc packaging, this edition of Cinema Paradiso features a "new 4K restoration of the theatrical version from the original camera negative, supervised by Giuseppe Tornatore, and 2K restoration of the Director's Cut version." (The liner notes state director of photograpby Blasco Giurato also supervised the restoration.) This is a definite upgrade from Arrow Academy's 2017 Blu-ray release of the film, which advertised a 2K restoration of the theatrical version. While I don't own the 2017 Arrow release nor the 2011 Lionsgate release, it's hard for me to imagine Cinema Paradiso looking any better than it does here.

The 2160p/HEVC H.265 transfer of the theatrical version, presented in Dolby Vision (HDR10 compatible), is often breathtakingly beautiful. The exterior daytime scenes exude a glorious vibrancy and crystal clarity that help immerse us in the Sicilian countryside. While grain can be heavy at times and the texture fluctuations might seem a bit jarring, the transfer's overall appearance remains wonderfully film-like, and that's essential for a movie like Cinema Paradiso. Bold colors (especially reds) add brilliant accents, but a natural look predominates, supplying a welcome aura of realism to a dreamy, nostalgic tale. Rich blacks, bright whites, and excellent shadow delineation enhance the picture, and fine details, like the specks of dust dancing in the projector's light beam, are marvelously distinct. Razor-sharp close-ups highlight glistening sweat and facial stubble, flesh tones are authentic and stable throughout, and costume fibers are crisp. No nicks, marks, or scratches mar the pristine source material and no digital anomalies intrude. If you're a diehard Cinema Paradiso aficionado, you'll definitely want to upgrade to this 4K UHD edition. 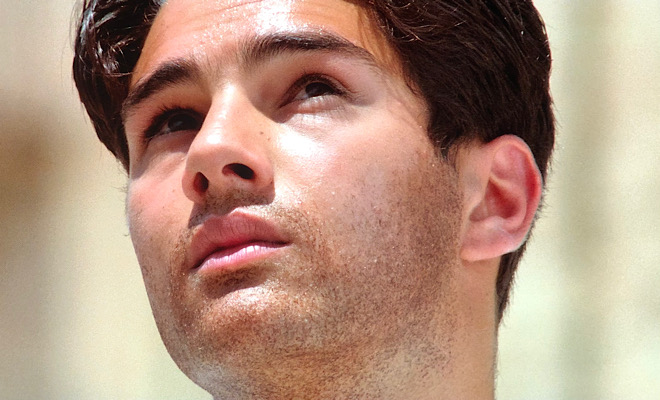 The director's cut features the same 1080p/AVC MPEG-4 transfer included in Arrow's 2017 release. An on-screen title card notes "the original 35mm camera negative elements were scanned in 2K resolution...[and] throughout the process, care was taken to ensure that the film's original texture, details and grain structure remained unaffected by digital processing. Although every effort has been made to present Cinema Paradiso in the highest quality possible, some minor picture issues remain, in keeping with the condition of the original archive materials." This transfer also looks great, with excellent clarity, contrast, color timing, and detail levels. Grain levels still fluctuate, but the film-like feel is preserved. No noticeable differences between the theatrical footage and previously deleted material could be discerned and no noteworthy print damage mars the source material. If you find you prefer the director's cut narrative, this transfer provides a seamless, enjoyable viewing experience.

The same audio tracks from the 2017 Arrow Academy release are included here. The theatrical version includes a DTS-HD Master Audio 5.1 track, as well as the original mono track, presented in LPCM. (The director's cut features the same DTS-HD Master Audio 5.1 track, but adds an LPCM 2.0 stereo track.) Surround effects are limited on the 5.1 track, but there's some nice stereo separation across the front channels. Strong bass frequencies provide a few potent rumbles (thunder is especially well rendered), while atmospherics like the sounds of the sea, gentle wind chimes, chirping birds, and buzzing insects nicey shade the action. Ennio Morricone's lush, romantic music score fills the room with ease, and a wide dynamic scale handles all of its highs and lows without any distortion. Dialogue is well prioritized and - if you're fluent in Italian - easy to comprehend, and no age-related hiss, pops, or crackle creep into the mix.

The LPCM 1.0 mono track is less immersive and enveloping, but still pumps out clear, well-modulated sound, as does the LPCM 2.0 stereo track on the director's cut.

All the extras from Arrow Academy's 2017 Blu-ray release of Cinema Paradiso have been ported over to this 4K UHD edition.

Cinema Paradiso will always bring a tear to the eye and put a lump in the throat, but during a global pandemic that has shuttered theaters and isolated movie fans, writer-director Giuseppe Tornatore's film resonates more strongly than ever. Arrow Academy's 4K UHD rendering of the theatrical cut (culled from a new 4K restoration) eclipses all other home video versions and instantly becomes the definitive edition of this romantic, nostalgic, and blissfully melancholic classic. Though the audio and extras remain the same, the allure of seeing this Oscar-winning film in Dolby Vision/HDR10 should be enough to merit an upgrade for fans of this enduring foreign film. Highly Recommended.