When a classic piece of literature is successfully adapted into a classic film - it takes a great director to give purpose to any future attempt. Spielberg's War of the Worlds isn't just a remake but a purposeful update to the H.G. Wells novel with modern relevant themes. It's grand sci-fi spectacle with genuinely human flawed characters with terrific performances from Tom Cruise, Dakota Fanning, and Justin Chatwin. Paramount Pictures lets War of the Worlds invade 4K UHD Blu-ray sourced from a new 4K Digital Intermediate with Dolby Vision HDR and an intense Dolby Atmos audio mix. If you're a fan - this is a beast of a release Highly Recommended. 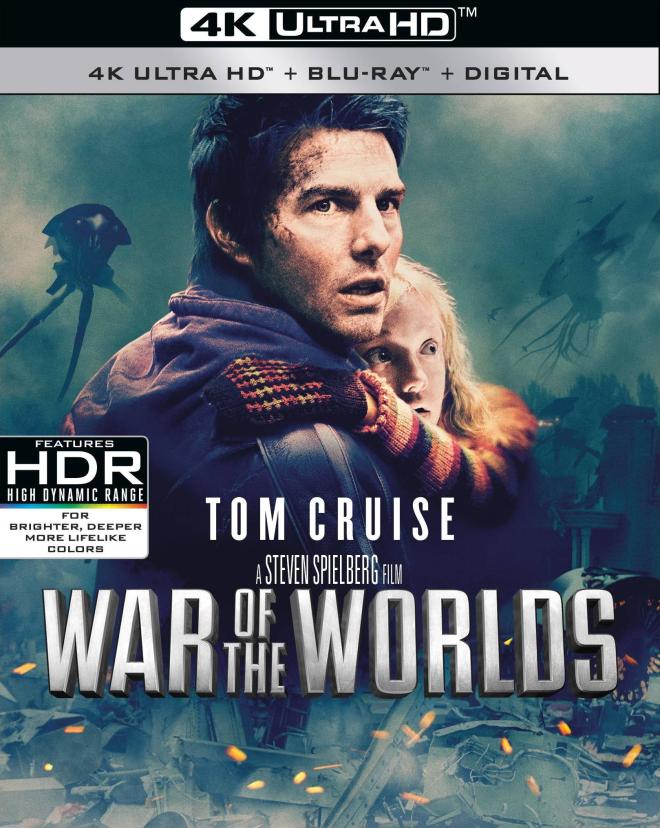 I too greatly appreciate what Steven Spielberg set out to accomplish with his War of the Worlds. When other filmmakers like Oliver Stone and Paul Greengrass were content to making films depicting the 9/11 events themselves - and somewhat exploitatively at that - Spielberg set about a thematic approach under the disguise of a science fiction summertime spectacle movie. I remember being blown away by this movie in the theater and every time I come back to it I get something more out of it. Recently watching the film ahead of this 4K UHD Blu-ray release, a new thing struck me about the ending. 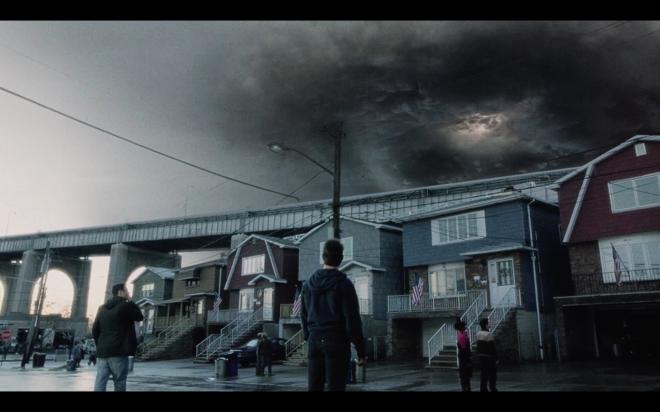 When I first saw War of the Worlds, like many others out there, was let down by the end where Robbie turns up safe and sound. It felt like a sentimental cheat by Spielberg that knocked what I thought was an otherwise near-flawless film. A few years on with one kid in the saddle a new notion hit me about the ending. Maybe I am being overly sentimental as a new parent but watching this again; Robbie had to live. When War of the Worlds hit theaters we were at the height of the Afghanistan and Iraq wars. The men and women fighting that war weren't veterans or seasoned fighters but the kids that signed up for the armed services immediately after 9/11 to defend their country. We were sending our children to war - and we had to believe that they could come home. Robbie had to make it home. Watching War of the Worlds now, that notion about the ending resonates for me and makes it a better film than the one I already believed it to be.

Having watched War of the Worlds just a few months ago, I didn't really have any intention to sit and watch all the way through again for this review. I meant to do some disc flipping, watch some key points, bang out a review of the A/V quality, and call it good. But damn it all, I got sucked into it again and had to see it through to the end. As he's done many times over the years, Spielberg did a twofer in 2005 with War of the Worlds and Munich. While I think Munich overall is a very good movie - it's just not as strong as War of the Worlds - it's last act is a bit thematically bloated, to say the least. This one proves to be the best balance of Spielberg's strengths for incredible visual spectacle and character drama. It's a heck of a flick and one well worth revisiting.

War of the Worlds invades 4K UHD thanks to Paramount Pictures in a two-disc 4K UHD Blu-ray + Blu-ray + Digital set. The discs are housed in a standard sturdy black 2-disc case with identical cardboard slipcover artwork. The 4K disc loads to a static image main menu with traditional navigation options. The included Blu-ray is the same disc from 2010 and does not enjoy the new master or Atmos audio track. 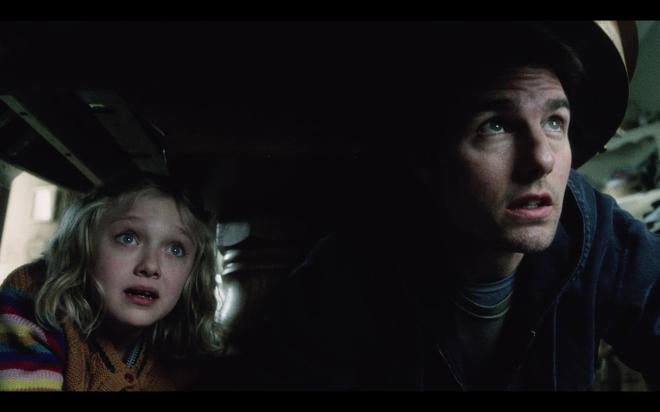 The early 2000s era of Spielberg and Janusz Kaminski's partnership is certainly a gritty, film grain-heavy one with highly stylized colors. Even knowing that a new 4K digital intermediate master had been struck specifically for this release, I was worried about how War of the Worlds would look on 4K UHD under such conditions. Holy hell! This is a night and day visual marvel thanks to the new master. From the prolog to the opening shot of Tom Cruise working the crane, there is an instantly noticeable improvement in detail clarity, colors, and image depth. I really wish they redid the included Blu-ray from this master so I could source appropriate examples for this review.

Kaminski loves his intense lighting and background blooming and that effect is present, but it's much more stable so that you can actually see people and objects along with some genuine color saturation. A great example is the game of catch in Ray's backyard. On the Blu-ray, the sunlight looks bright white and washes out facial features and objects. On the 4K UHD, the light takes on a more fall-like golden sunlight appearance, and some facial features and object clarity return. I've been so used to watching the Blu-ray I wasn't expecting the clarity! The gritty nature is still retained - it's just much more refined. Film grain is a constant companion for this film but doesn't appear as noisy or gloppy as the Blu-ray. It's still prominent, the film still looks gritty and raw, but has a more natural presence allowing fine details to flourish in ways they didn't on the older 1080p Blu-ray.

Dolby Vision HDR does what it should do by enhancing and refining colors, black levels, and whites without completely changing the look and feel of the film's original presentation. As I mentioned the biggest improvement most folks will see with this disc is the baked-in hot whites and blooms. That shot of Ray climbing down from the crane - not only can you see his face but the red of machinery and the blue shipping containers comes to life instead of being washed out by hot white light. The coloring still favors the washed-out look but there's more nuance with golden tones giving the image some warmth - but not too much. The image still maintains a cooler quality to it like it takes place in early fall. Blacks are deep and inky without any crush allowing the image to maintain some welcome three-dimensional depth. As I said, flipping between discs, it's a night and day improvement with this native 4K disc easily blasting the old Blu-ray into dust. I honestly have very high hopes now for Minority Report and what 4K UHD could offer that film. 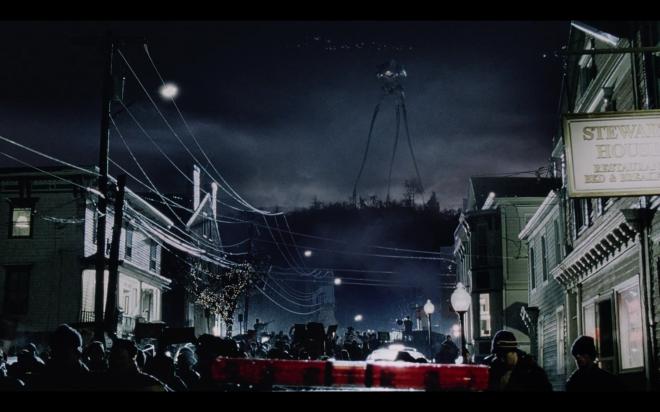 Not only does War of the Worlds enjoy a terrific native 4K transfer but it gets the added bonus of a new Dolby Atmos audio mix that leaves behind the original 5.1 mix. The film's quiet moments at the beginning where Ray and Robbie are playing catch is a beautifully subtle mixing allowing for sides, rears, and verticals open up the space allowing the sound of the wind to whip through the chainlink fence and the sheets on the clothesline. But then damn, when that lightning strike sequence hits this Atmos track roars to life, giving startling pinpoint overhead presence with intense LFE with each and every strike. It was like being in the theater watching this for the first time! Likewise when the first tripod emerges from the ground and its sonic bellow foreshadows its the deployment of its death rays -- it's great stuff! The 5.1 DTS mix was already impressive but this Atmos track just kicks everything up a notch in all the right places. Dialog is clean and clear throughout, John William's atmospheric score comes through brilliantly. Levels are spot on but I suggest for maximum impact you crank it a little just for the fun of it. This was a track I wanted to play LOUD because I wanted to - not because it was mixed soft to begin with.

UPDATE:
After doing some intense direct comparisons I am amending my original 5/5 review down a titch. The LFE on the original DTS-HD MA 5.1 mix is more bold and impactful - however - I will say the Atmos mix allows for more presence and distinct placement of some of the impact effects like the lightning strike sequence for example. When the strikes hit they may not produce the same "whooshing" quality but with the active overhead channels and additional surround spacing, it gives a more open and direct placing and space. This isn't to say there's no LFE at all - there's plenty to go around, it's just different, and perhaps applied with a little more nuance rather than being about ear-crushing sound. - Thanks! 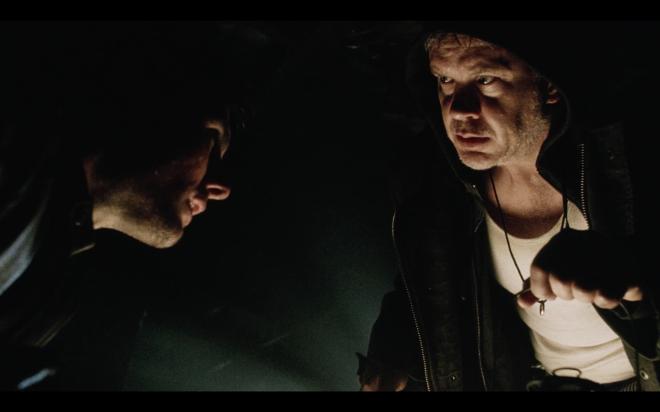 No new bonus features were crafted for this release. All materials are found on the included standard Blu-ray. 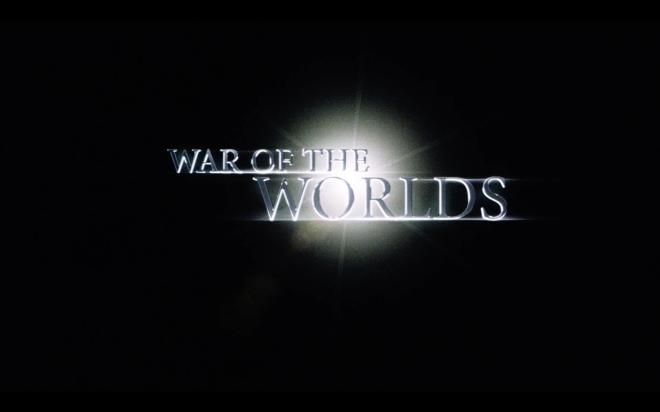 While I have an unending love of the original 1953 War of the Worlds - that is finally coming to Blu-ray from The Criterion Collection, Steven Spielberg's own reworking of H.G. Wells' classic novel stands on its own. A product of its time and place in American history, Spielberg crafts a personal character drama within the framework of a summertime spectacle science fiction event film. Tom Cruise even gets to shine performing perhaps the greatest stunt of his career by convincingly portraying a blue-collar dad estranged from his children. I wish the Cruise/Spielberg relationship had lasted longer than it did - their two films together are a gift to science fiction.

Paramount Pictures gives War of the Worlds a worthy A/V upgrade presenting the film with a newly mastered native 4K transfer with Dolby Vision HDR that easily wipes away the old 2010 Blu-ray. If that wasn't enough, the new Atmos audio mix brings a thundering intensity to the film providing full usage of the format beyond "extra space" with some terrific pinpoint audio effects. Simply put, War of the Worlds looks and sounds better than I thought possible offering clear and obvious improvements over all previous home video releases. Very Highly Recommended.