Just in time for the upcoming sequel, Tony Scott's Top Gun remains an entertainingly cheese-tacular action drama that has endured as an 80s cultural phenomenon. The classic fan favorite flies into the 4K Ultra HD danger zone with an excellent Dolby Vision and Dolby Atmos presentation, making it the best home video edition. With a pair of new featurettes for fans to enjoy, the overall UHD package is recommended.

From a deceptively smart and well-structured script by Jim Cash and Jack Epps, Jr., Top Gun follows the far-too-reckless and dangerous Naval Aviator Pete "Maverick" Mitchell (played to iconic perfection by Tom Cruise) through an unexpected journey of deep self-reflection. Director Tony Scott takes a rather neutral, even-handed approach to the material, allowing the young hotshot fighter pilot to live up to his moniker and succumb to his overly-inflated ego, the type of character which Cruise always seems best suited for. There are times when Scott comes dangerously close to losing the audience's interest as Maverick grows to be a bit of an annoyance, making it difficult to sympathize with a character who doesn't realize he's not as suave and charming as he imagines himself. But as the story continues, we wonder if that's not the point. Halfway into it, just when we can't stand to be around the guy anymore, it seems even Maverick is starting to annoy himself.

This aspect of the narrative shows intelligence and a clear forethought. The protagonist is surrounded by others wanting to help him on his journey towards self-improvement, to realize that the world, and the battlefield in general, cannot be won by charm and talent alone. While others are shooting at him, aiming to kill him and his fellow soldiers, he has to learn to work with others. Maverick's greatest and most difficult hurdle is himself. His instructors (Tom Skerritt and Michael Ironside) try to impart this lesson. His school competitor, "Iceman" (Val Kilmer), offers advice, albeit rather condescending. Even those closest to him, Kelly McGillis's "Charlie" and Anthony Edwards's "Goose," make attempts for him to understand this valuable truth. Unfortunately, just as he's coming around, a fatal accident finally makes him realize how much of danger he can be during combat. For a plot based on an article about the Fighter Weapons School in Miramar, the script is very well-written with a concise and terse story that remains just as entertaining thirty-four years later. 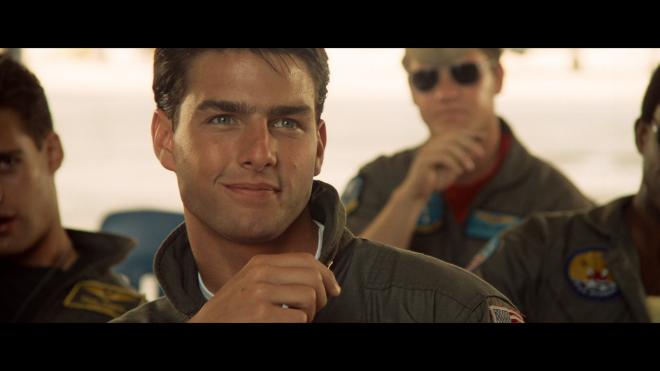 For a more in-depth take on the movie, you can read our review of the 2016 Blu-ray HERE.

Paramount Home Entertainment brings Tony Scott's Top Gun to Ultra HD Blu-ray as a two-disc combo pack with a flyer for a Digital Copy, which can be redeemed via paramountmovies.com and VUDU. When redeeming said code, users are granted access to the HD SDR version with legacy Dolby Digital audio, but the 4K Dolby Vision version with Dolby Atmos is available for purchasing separately. The dual-layered UHD66 disc sits comfortably opposite a Region Free, BD50 disc inside a black, eco-elite vortex case with a glossy slipcover. At startup, the disc goes straight to a menu screen with the usual options along the bottom, music playing in the background and clickable windows on the left.

In preparation for its upcoming sequel, Tony Scott's military drama celebrates its entry to the elite school of Ultra HD with an attractive and largely satisfying HEVC H.265 encode. After some arduous back-and-forth testing against its Blu-ray compatriots, including the accompanying new Blu-ray disc, the end results don't quite place the encode in the top one percent, but it is nonetheless an appreciable advancement and the best the film has ever looked.

This is largely thanks to a brand-new remaster and restoration of the original 35mm camera negatives, which was later mastered to a new 4K digital intermediate. However, when switching between this 2160p version and its 1080p brethren, overall definition and clarity don't yield the sort of leaps-and-bounds difference we'd expect. Granted, the picture enjoys a welcomed uptick, such as in the hair and threading of the uniforms, but on the whole, details are not significantly sharper with only a few generally pleasing moments sprinkled throughout. On the plus side, the ultra-fine grain is a bit more apparent, supplying the 2.35:1 image with a lovely film-like appearance.

The win in this competitive school is the improved contrast and brightness, showering practically every scene with brighter, more energetic whites and richer, truer blacks. Again, it's not a massive leap, but the better contrast allows for crisper, more dazzling specular highlights to give medals and various metallic surfaces a nice realistic polish. There are a few sequences, however, where the whites seem a bit overblown or much hotter than what's been seen in previous Blu-ray releases. It's not too egregious, but it's noticeable nonetheless, such as at the end of the first act when Maverick and Charlie are talking in the halfway (around the 29-minute mark) and the finer details of the hangar in the distance are slightly washed out. 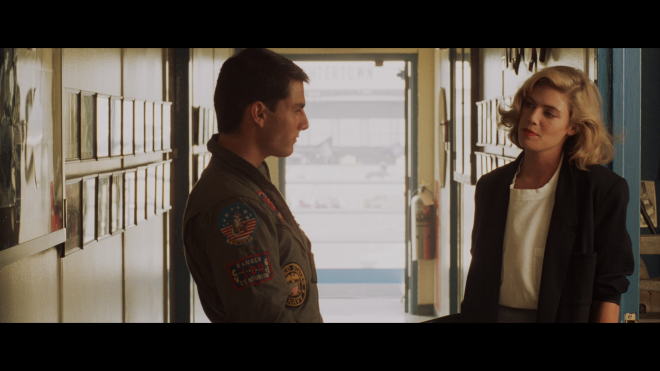 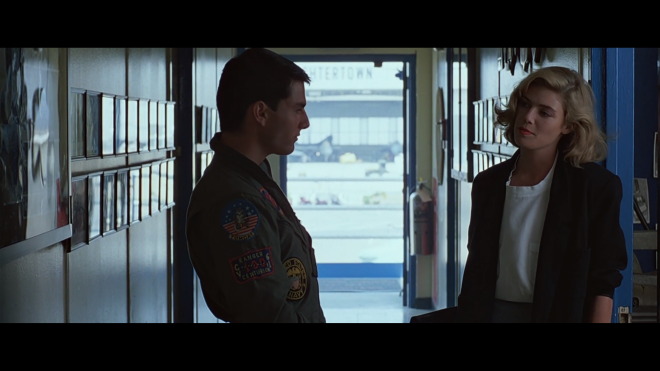 Take the above comparison screengrabs for example but with a huge grain of salt: the top from the 4K Ultra HD disc and the bottom from the 30th Anniversary Blu-ray Edition. Although both pictures were taken directly from the discs on a professionally calibrated system, seeing the images at their full HDR/WCG potential will depend on the capabilities of each viewer's screen. Nevertheless, the two images allow for just enough visible information to reflect the experience at home and be able to note the difference in contrast and the improvement in the overall color palette and timing.

Ultimately, such minor infractions in the contrast can easily be overlooked in light of the new color timing supplying the 4K video with a richer, better-saturated array of colors. Immediately apparent, the Dolby Vision presentation is significantly warmer, staying true to Scott's signature style and look, one which heavily favors lots of sandy tans, earthy browns and sepias drenched in fiery oranges, blazing marigolds, blistering golds and vibrant buttery yellows. Impressively, this makes flesh tones appear more realistic and accurate to the hot climate with lifelike complexions and rosy highlights in the cheeks. Meanwhile, primaries enjoy better saturation and are much fuller than its HD SDR counterparts, making this 4K video edition of the classic film a winner over the Blu-ray and a recommended purchase for die-hard fans. (Dolby Vision Video Rating: 82/100)

Also worth noting, the accompanying Blu-ray disc is also a new 1080p/AVC MPEG-4 encode, struck from the same 4K digital intermediate. The picture quality is relatively similar to the result mentioned for the Ultra HD disc, making it a notable jump over previous editions, showing the same contrast issues and benefitting from an improved color timing. The video displays fuller blacks and awash is a fine layer of natural grain, providing the HD image an attractive, film-like appeal. For long-time Top Gun fans collecting on various formats, the movie has never looked as good as it does here.

Top Gun flies into the danger zone with an excellent and highly enjoyable Dolby Atmos soundtrack that provides some strong competition against its Dolby TrueHD and DTS-HD MA predecessors.

The object-based mix delivers slightly wider, more expansive imaging with lots of background activity persuasively moving between three front channels and bouncing into the top heights. The engaging half-dome soundstage comes with a cleaner and more detailed mid-range, exhibiting better clarity and separation during action sequences while the score and song selections enjoy improved fidelity with a great deal of warmth. All the while, vocals remain well-prioritized with outstanding intonation in the more emotionally-driven moments. Low-frequency effects are impressively robust and occasionally aggressive, delivering powerful, thunderous roars during jet engine blasts and other explosions.

As with previous lossless mixes, much of the design is a front-heavy presentation, but rear activity comes alive during the dogfights, expanding the soundfield with the noise of F-14s screaming in the surrounds and echoing through the overheads. There are a couple moments when the jetplanes distinctly fly above the listening area and into view, but ultimately, the top heights do a majority of the leg work in widening and heightening the action. The real winner, in the end, are the memorable songs, filling not only the entire soundscape but also subtly bleeding into the sides and overheads for a satisfyingly good time. (Dolby Atmos Audio Rating: 80/100)

It has been brought to my attention there could be some concerning audio issues with the object-based soundtrack, so I revisited the track on both the new Blu-ray and Ultra HD discs and compared the audio with its lossless predecessors: the 2008 and 2016 Blu-ray discs (BD).

I visited two specific timestamps that were sent to me for closer analysis and carefully listened for any anomalies. At the 1:21:43 mark (1:21:38 on the 2016 BD), we have a minor issue with intensity or loudness. When Maverick arrives at Viper's home, the foley effects of Viper's wife walking away are oddly louder or more audible than the rest of the action within the scene. This appears to be an issue with the original sound design, as in that is how was it was recorded during post-production and can be clearly heard in the lossless tracks of previous BD releases. Therefore, this is not an anomaly in the Dolby Atmos mix but inherent.

The scene starting at 1:27:16 (1:27:12 on the 2016 BD) is also inherent to the original design, not a sync issue unique to the Atmos mix. While Stinger is briefing the pilots of the "crisis situation" in a full shot, his lip movement does not perfectly match the dialogue, very likely due to poor ADR work, not a failure in the transfer or the codec. This can also be seen and heard in its DTS-HD/Dolby TrueHD counterpart, but it's not as noticeable. The possible reason for why it is more apparent now is due to the higher resolution levels and our relative distance to the character as he speaks; we can better now see James Tolkan's lip movement than in previous video editions.

As far as I can tell on my system, there are no sync issues in the audio codec. It's just an unfortunate audio anomaly inherent to the original sound recording.

The 80s action classic lands on Ultra HD with a pair of new supplements while the rest of the bonus features ported over from previous releases are on the accompanying Blu-ray disc.

Full of 80s machismo and shirtless volleyball, Tony Scott's Top Gun is an over-the-top cheese-tacular action flick that somehow grew into a cultural phenomenon. The movie catapulted Tom Cruise's career into mega-stardom while also raising the number of naval recruits at the same time, and it strangely endures both as an 80s fan favorite and as the butt of many, many jokes. The classic actioner flies into the Ultra HD danger zone with a beautiful 4K Dolby Vision and Dolby Atmos presentation that surpasses previous HD SDR releases, making this the best the movie has ever looked and sounded. With an identical set of bonuses joined by a pair of new featurettes, the overall UHD package is recommended.