Ridley Scott's sword and sandal epic Gladiator celebrates its 20th anniversary with stylish new SteelBook packaging. Russell Crowe dominates the screen in this lavish production sporting a brilliant 4K transfer with Dolby Vision HDR10 and a lively DTSX mix. It's the same set as previously released in 2018 - only now in a shiny SteelBook! If you already own this set and new fancy packaging isn't your thing - you're good to go. If you've yet to upgrade this release, now's the perfect time to do so. Highly Recommended.

"Are you not entertained?"

As this is the same set of discs as previously released, Read our 4K Ultra HD Blu-ray Review 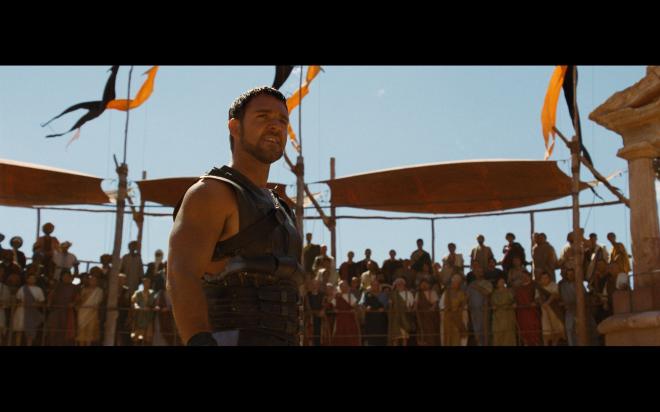 For me, Gladiator was a hell of an event when it hit theaters. I was working at my local multiplex at the time I discovered this movie. I was checking theaters, making sure the film was rolling correctly - yes we projected film in those days - and as I was leaving one of the auditoriums I suddenly heard Basil Poledouris' Anvil of Crom opening track from the Conan the Barbarian soundtrack. As that's one of my top all-time movie scores, I had to check out what the hell was using that music - I silenced my radio and just watched. That first trailer for Gladiator was damn exciting and I was even more eager to see the movie once our massive 8' x 11' theater banner showed up.

I loved Gladiator when I first saw it in theaters, when I bought the first DVD, then the deluxe extended DVD, the first Sapphire Series Blu-ray release - quickly followed by the first replacement disc - and now 4K Ultra HD Blu-ray. Every time I purchase the movie the visual and auditory experience gets better and better - but for some reason, I worry that I won't enjoy the movie the same way that I used to. There's this piece of me that fears it'll end up being like Forrest Gump where I liked it in theaters but hated it once it got to home video. I'm always in a state of reevaluation with movies and as I age I appreciate some movies more and more where others fall off the map entirely. Gladiator won Best Picture for 2001 but I don't believe it's 100% worthy of that accolade. It's a great movie for sure, and after a stretch of flops a welcome return to form for Ridley Scott, but I can't help but peg Crouching Tiger, Hidden Dragon as a better movie - and even then I'm quite partial to Traffic.

Gladiator is mass entertainment at its finest. Flawless, no, but damn good. Russell Crowe kills it. Joaquin Phoenix sells the right amount of crazy as the villain. Sandwiched between these two actors is a major spectacle of action and adventure expertly executed with Ridley Scott's eye for visual styling. It was a welcome throwback to a bygone era of Hollywood epics that more or less died out with the bloated Cleopatra. Growing up with Harryhausen's 7th Voyage of Sinbad and Jason and the Argonauts - as well as non-fantasy features like The 300 Spartans and Alexander the Great - I really enjoyed the nostalgia Gladiator brought back to movie screens. I didn't like the imitators that followed this movie's release, but that's a whole other review. 20 years later, I'm glad this one still holds up.

Gladiator celebrates its 20th Anniversary -- dear god has it really been that long? -- in style with a 3-Disc 4K Ultra HD + Blu-ray + Digital set now housed in a slick metallic-embossed SteelBook packaging. It's the same three discs as previously released. The disc loads to a menu with the option to chose the theatrical or extended cut of the film - which then leads to a static-image main menu with traditional navigation options.

"Gladiator fights its way onto 4K Ultra HD Blu-ray with a splendid, filmmic 2160p HEVC encode that's framed in the film's original 2.39:1 theatrical aspect ratio and is presented with Dolby Vision and HDR10 High Dynamic Range. Created from a new 4K scan of the film (Paramount was unclear about which specific elements), Gladiator has never looked better, but we do have a few nitpicks that are mostly due to the film's source materials. Still, our issues are minor so fans and 4K enthusiasts should be delighted."

"Taking everything we loved about the 5.1 track, the DTS:X mix (which will play in DTS-HD MA for those lacking X capabilities) quite literally elevates everything. As I said above, it doesn't quite have the overhead articulation of a DTS:X mix like a Crimson Peak, so it doesn't provide a perfect audio-dome sensation, but the whole mix sounds TALLER. To put it another way, if you have satellite or bookshelf speakers at your ear levels, this mix sounds more like you're sitting in a room of giant towers. Hans Zimmer & Lisa Gerrard music rises and envelopes. Rooms echo more convincingly. And flying weaponry and pans from side-to-side, forward-to-back, and all around us. It's a revision that honors its original, aggressive mix while lifting it into a more modern era."

All of the available bonus features for this release are the exact same ones offered in the original Sapphire Series Blu-ray. This really is a grand set of bonus features. The Strength and Honor feature runs over three hours total on its own - not to mention the two excellent audio commentaries with Ridley Scott and various cast and crew. The Scott/Crowe one for the extended cut is particularly great.

Seeing as how the 2018 release of Gladiator on 4K Ultra HD Blu-ray was already a terrific release, about the only thing that could have been done was offer additional retrospective bonus features for this 20th Anniversary release. The film - both versions - has never looked or sounded better on home video instantly making up for the debacle that was the original Blu-ray release. If you already own the set on 4K UHD - this SteelBook release may not be enough of an incentive to dip in again, but if you still haven't added this to your 4K collection - it's an essential piece. Highly Recommended.