Every movie celebrates its 25th Anniversary, but not every movie gets a 4K Ultra HD Blu-ray SteelBook. Paramount gives Braveheart a second chance to conquer 4K UHD Blu-ray by repackaging the same excellent three-disc set in a fancy new SteelBook package for collectors. The movie may be historically questionable, but it's a rousing adventure with spirit and one of Mad Max Mel's best acting and directorial efforts. 25 years later it still looks and sounds amazing thanks to impressive Dolby Vision/HDR10 transfer and Atmos audio. If you already have the previous release, the SteelBook may not be enough to entice a second purchase, but if you don't own Braveheart in 4K already - now's the time to pick it up. Highly Recommended.

"Where are you going?" 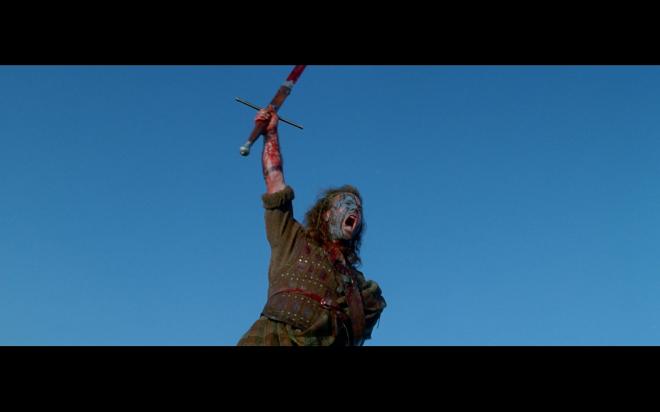 While far from being an accurate historical epic, 1997's Best Picture-winning Braveheart starring and directed by Mel Gibson has endured as a home video fan favorite. From the first DVD to Blu-ray and now to 4K Ultra HD Blu-ray, the film has always been a showcase picture to demo your home theater setup to friends and family. It was an impressive production in its day with every penny of the budget delivered on screen. From the makeup to the costuming to the scenic Scottish locations - it's just a damn beautiful movie.

I still remember seeing Braveheart in theaters when I was all of thirteen years old. It was a story of rebellion I had heard of, but never knew anything about. Throw a quarter in the bucket of time and you'll hit a dozen different periods of English history rife with rebellion or invasion. As this film hit theaters within a month of Liam Neeson's adventure Rob Roy - the English Monarchy was an easy punching bag for true-hearted cinematic rebels longing for their own slice of freedom. I saw both films in theaters and they're both favorites - but I have to say Braveheart wins the day. The combination of the amazing and brutal action sequences, James Horner's iconic score, and Mel's deft abilities in front and behind the camera make this movie a genuine cinematic achievement.

With each subsequent home video release, I feel like I come to appreciate the film more and more. As a favorite, it's not one I pull off the shelf for regular viewings. I maybe give this one a run every 2-3 years. I never want to tire of it. It hasn't happened yet, but I feel that for some movies it's best to give them a rest between viewings. Now James Horner's score - I can listen to that all day and night and not get tired of it! Alongside his work on Glory and Apollo 13 - his score for Braveheart is one of his best. But enough of me prattling on about this movie. In the last 25 years; you're either someone who enjoys what Braveheart has to offer - or you don't. I assume if you're even considering this 25th Anniversary SteelBook release you're someone who probably really likes the movie!

For its 25th Anniversary, Paramount Pictures delivers Braveheart to 4K Ultra HD Blu-ray with the exact same three-disc 4K UHD Blu-ray + Blu-ray + Digital set - only now in a fancy SteelBook packaging with metallic highlights. Each disc rests in its own cradle without being stacked on top of one another. The disc loads to a static image main menu with traditional navigation options.

"Despite occasional softness inherent to the photography, Braveheart in 4K is more often wonderfully sharp and detailed. From the actors' faces and beards to the wide Scottish vistas to the ornate noblemen costumes to individual blades of grass in the meadows, I've never seen Braveheart this clearly. Even makeup effects are more gruesome, from the many, many stab-wounds to Robert the Elder's bubbling Leprosy. Yet, there are no signs of digital sharpening or noise reduction as the grain structure remains intact and naturally filmmic.

Colors and contrast also reveal noticeable improvements in A-to-B comparisons. Thanks to Dolby Vision (or HDR10, depending on your setup), green battlefields seem lusher, crimson costumes and rivers of blood seem more vibrant, and blue skies seem more infinite. Grain levels do spike during certain nighttime shots, but overall black levels are deep and inky, plunging the story into darkness when needed while revealing details along the way. There's also a touch more highlight detail in bright, cloudy skies."

"While less articulate and refined compared to more aggressive object-based sound mixes, Braveheart sounds wonderful in a new Dolby Atmos soundtrack that sets James Horner's iconic musical score free to soar over and around the audience.

Released early in the modern surround era, Braveheart offers up a fine mixture of clear dialog, warrior screams, clashing swords, flying arrows, and thundering horses. Dialog and sound effect elements sound full and uncompressed across a variety of tonal frequencies, though ever-so-slightly less dynamic than the best-of-the-best mixes. Overhead sound placement is moderate, overall, but there are some nice moments with falling rain and flying weapons. The true showstopper of the whole mix is the way James Horner's iconic musical score radiates from every speaker -- front, side, behind, and above. It's like sitting in the middle of an orchestra with Horner as he fuses 20th Century synthesizers with classical and choral elements."

While the only bonus feature found on the 4K disc is Mel Gibson's audio commentary, this three-disc packaging includes the two Blu-rays from the previous Sapphire Series release where you will find an HD version of the movie along with all the special features, which we reviewed HERE.

Braveheart is classic movie-making at its best. It's a grand historical epic, visually stunning, complete with heartfelt performances and incredibly brutal and engaging action sequences. In 25 years it's enjoyed one impressive home video release after another and with this 4K Ultra HD Blu-ray release, it's a feast for the eyes and ears. While this Braveheart 25th Anniversary SteelBook features the same discs previously released in 2018 - it's an essential piece of your 4K collection. If you already own these discs, a SteelBook repackage may not be enough of an incentive to purchase again, but if you've recently started collecting the format - now's the perfect time to add it to your collection. Highly Recommended.