One of the most stirring, important, and controversial films in cinema history at last comes to 4K UHD in a top-notch collector's edition from Shout! Factory. The Deer Hunter won five Academy Awards, including Best Picture, and director Michael Cimino's emotionally wrenching epic about friendship, disillusionment, and the horrors of war packs an even more powerful punch with the enhanced clarity that distinguishes this top-notch Dolby Vision and HDR presentation. Several brand new extras - as well as most of the old ones included on previous home video editions - sweeten the pot, and though the lack of an Atmos audio track is disappointing, that single omission doesn't dull the allure of this Shout Select release. The Deer Hunter may focus on a bygone era, but it remains a timeless portrait of humanity at its best and worst, and its thought-provoking messages continue to resonate. In any form, but especially in the splendor of 4K UHD, this potent film comes Highly Recommended.

It's hard to believe it's been 42 years since The Deer Hunter premiered to great acclaim and controversy in 1978. I was 16 at the time and the film made an indelible impression upon a very impressionable me. Fear, anger, and heartbreak were only some of the emotions coursing through me as I watched director Michael Cimino's epic tale of brotherhood set against the backdrop of the Vietnam War. Though its shock value has waned over the years, the film still packs an emotional wallop, especially because the climate of our country today eerily reflects the unrest and uncertainty that gripped our culture in the 1960s.

The Deer Hunter may not be a perfect film, but it's an enduring one. Winner of five Academy Awards, including Best Picture, it marked the first major Hollywood movie to immerse us in the Vietnam conflict, and it features outstanding performances from Robert De Niro, Christopher Walken (who won a Best Supporting Actor Oscar), John Savage, Meryl Streep, and John Cazale. Cimino's overindulgent direction and the film's excessive length at times try our patience, but the overriding emotional effect eclipses any ego on display. The agonizing, gut-churning Russian roulette scenes may be fictitious, but they serve an essential purpose, possibly resonating even stronger today as we deal with domestic gun violence on a grander scale than many of us ever could have imagined. 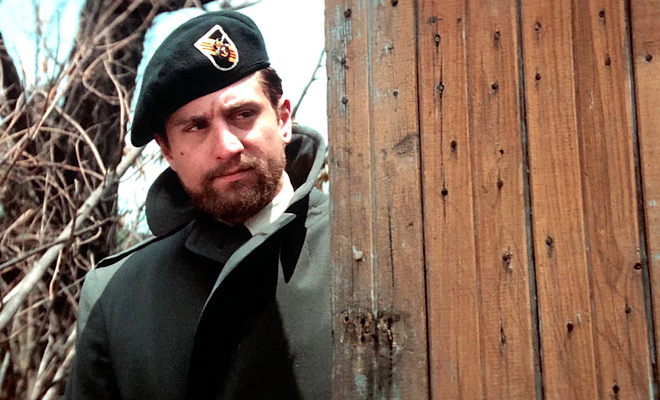 Now The Deer Hunter comes to 4K UHD, and all the spectacle, intimacy, grit, grime, and gamut of feelings are more immediate than ever before. The enhanced clarity heightens our visceral reactions to the drama and reminds us what a beautiful film The Deer Hunter often is. Some Best Picture winners aren't worthy of the honor and don't stand the test of time. The Deer Hunter is not one of those films. It may be difficult to watch, it may expose unpleasant truths, and it certainly has faults, but it's part of the fabric of our country's history, and as such, it needs to be revisited. The release of this 4K UHD edition gives us that excuse at a very timely moment.

For a more complete review of The Deer Hunter, check out what I wrote about the film at the time of its initial Blu-ray release in 2012. 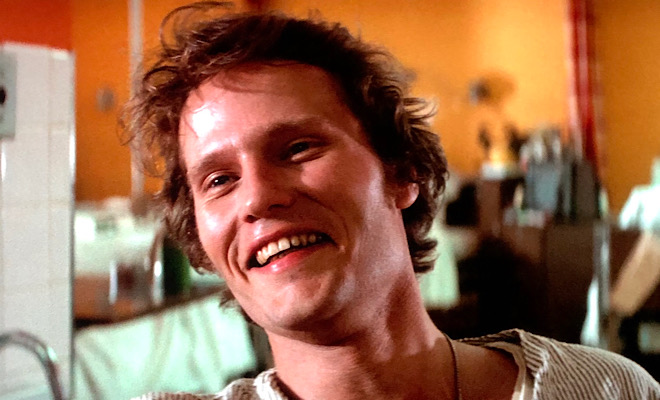 The long-awaited American 4K UHD edition of The Deer Hunter comes packaged in a standard case inside a sleeve. The two-disc set contains both 4K UHD and traditional Blu-ray presentations of the film, with all of the supplements housed on the Blu-ray. (The audio commentary appears on both discs.) Video codec is 2160p/HEVC H.265 for the 4K UHD disc and 1080p/AVC MPEG-4 for the Blu-ray disc. Audio for both discs is DTS-HD Master Audio 5.1 and DTS-HD Master Audio 2.0. Once the discs are inserted into the player, the static menu with music immediately pops up; no previews or promos precede it.

The premiere of The Deer Hunter on 4K UHD is exciting stuff, but the addition of Dolby Vision to the HDR presentation makes this release extra special. When viewed with Dolby Vision engaged, the 2160p/HEVC H.265 transfer is everything any fan of this film hoped it would be, yet even the wonders of UHD can't magically resolve existing issues with Vilmos Zsigmond's Oscar-nominated cinematography. We'll get to those below, but first, let's celebrate the superior aspects of this high-quality transfer.

The movie's natural grain structure remains intact, resulting in an incredibly film-like image that bursts with exceptional clarity and bold, vibrant color. Though the grit and grime of the Pennsylvania steel town looks appropriately dull, bits of eye-catching hues accent the bleak picture, just as they do in the bowels of war-torn Saigon. The green lockers in the steel mill locker room, the red jackets of the volunteers running the bingo game at the military hospital, the decorations on Michael's uniform, Nick's red headband...all of these elements are beautifully and sumptuously rendered. The deer-hunting scenes, which were shot in the Cascade Mountains in Washington State, are breathtaking. In addition to the verdant hues of evergreen trees, the crystal blue of the lake and sky, and the loud orange of Michael's hunting jacket, we can almost taste the crisp mountain air and feel the mist envelop us. 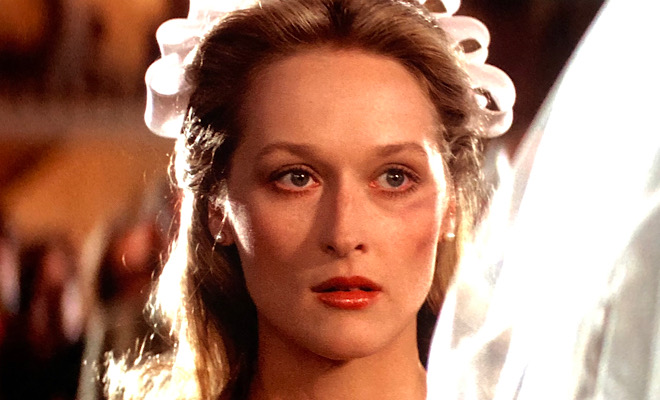 Exceptional detail levels highlight the ornate decorations of the Russian Orthodox church as well as the disarray of Michael's ramshackle house, while the sparks in the steel mill distinctly dance across the screen. Razor-sharp close-ups allow us to zero in on beads of sweat, cuts and bruises, facial stubble, and the copious amounts of filth smeared across the faces of De Niro, Walken, and Savage. Flesh tones appear natural most of the time, costume fabrics come through well, and patterns remain rock solid throughout.

Now, the black levels... The Deer Hunter is not only a thematically dark film, it's also often a photographically dark film, and the only downside of all the gloriously rich and inky blacks that permeate this transfer is that they emphasize the murkiness and muddiness that so often overwhelm the frame. Dark moments now appear even darker, heightening the instances of crush that have always plagued home video editions of the movie. While the nocturnal scenes of Saigon juxtapose the brilliant hues of neon signs against the sea of people swarming the street, the back alley interactions often seem on the edge of slipping into a dark abyss. That said, what's especially impressive about this transfer is that these incredibly dark moments don't exude the excessive graininess that often afflicts low-lit photography. The intense shadows and night sequences are always as smooth as luxurious black velvet, which helps keep the presentation as a whole consistent throughout. Yes, shadow delineation could be stronger and the loss of clarity at certain moments is frustrating, but these elements are baked into the original film, and this transfer deals with these difficult challenges in the best manner possible. 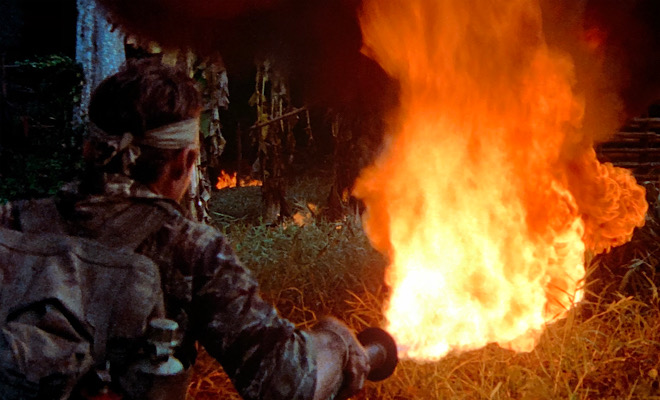 The HDR10 presentation can't quite match the overall lushness and dazzling hues of Dolby Vision, but it's still quite impressive. Detail levels, contrast, and color balance are all terrific, and though blacks aren't as dense, the crush issues still remain. If you're seeking a slightly more natural look, go with HDR, but to get the best possible rendition of The Deer Hunter, definitely engage Dolby Vision, if you have that capability.

The included Blu-ray is also a step up from the 2012 release. The previous VC-1 encode has been replaced with a 1080p/AVC MPEG-4 encode, and the results, especially when upscaled to 4K, rival the UHD presentation. So even if you haven't yet upgraded your display to 4K, you should think seriously about upgrading your Blu-ray of The Deer Hunter. You'll be pleased with the cleaner, more vibrant picture, and you'll have the UHD disc on hand in case you upgrade your setup in the future.

The following screenshots compare the 4K UHD transfer in Dolby Vision with the standard Blu-ray transfer. The Dolby Vision pics are on top; the Blu-ray pics follow them. 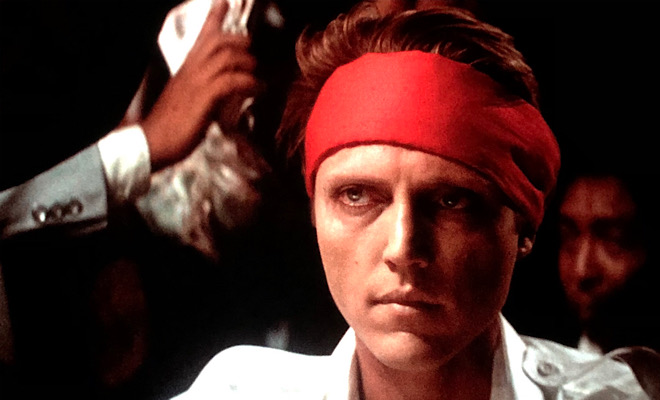 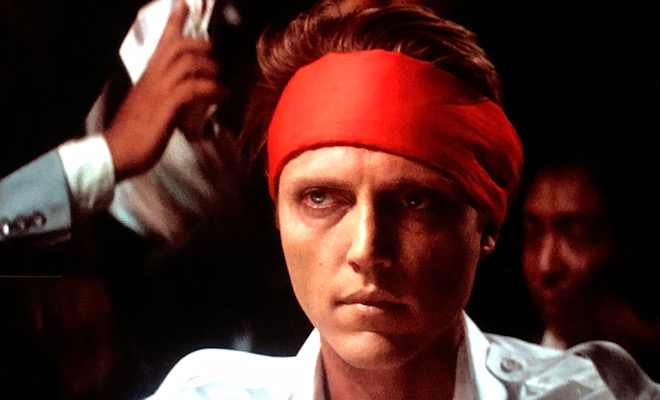 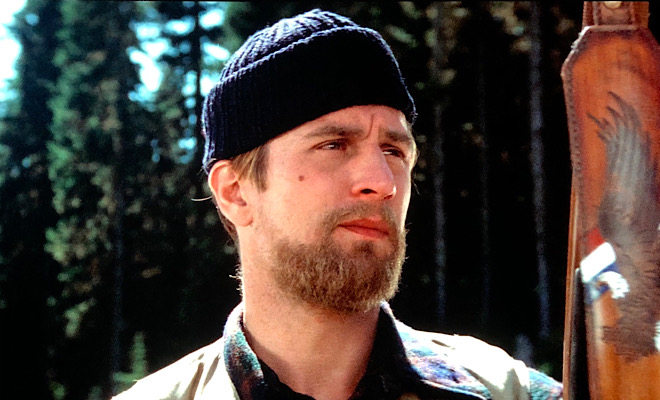 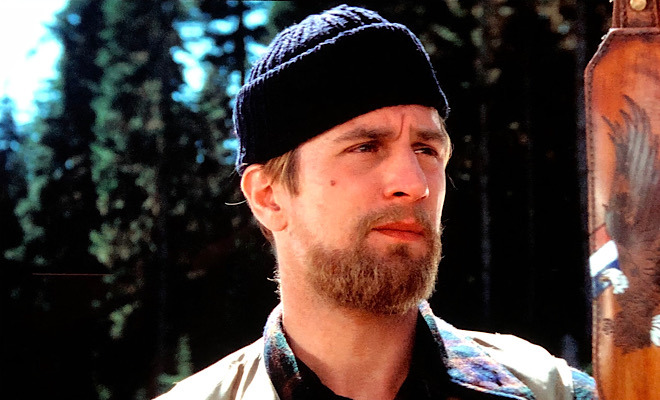 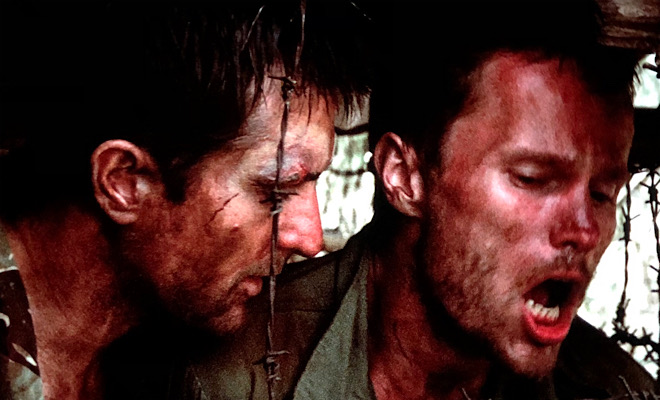 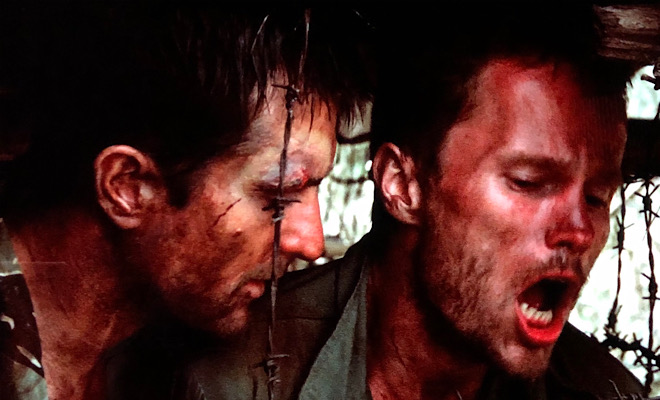 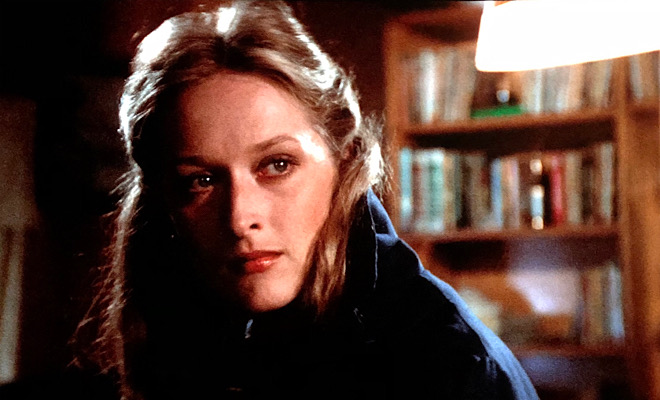 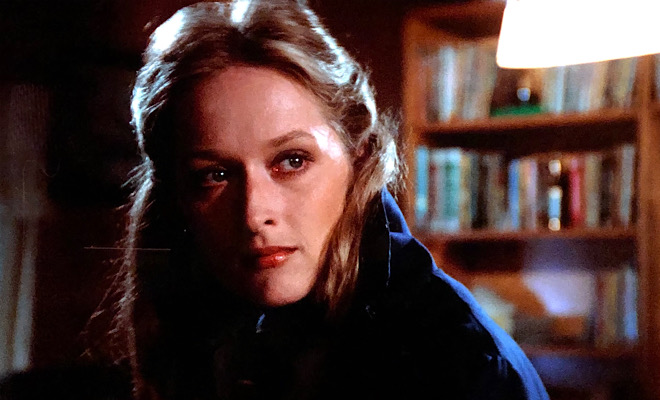 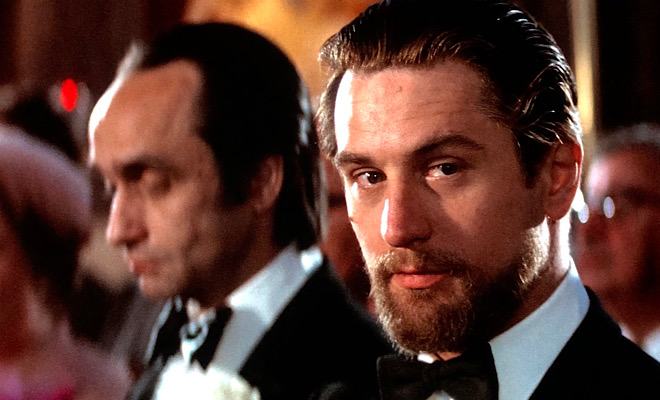 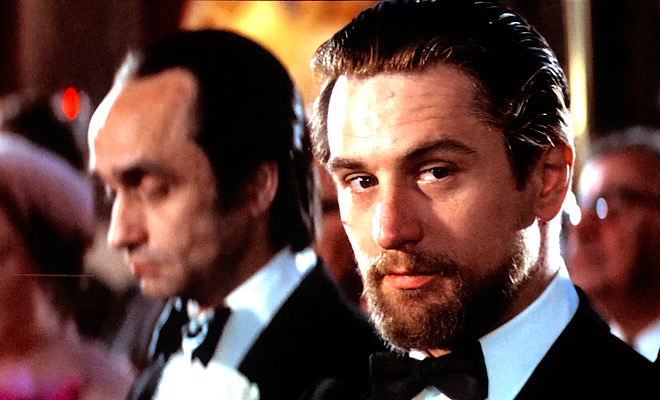 Sadly, the audio has not been upgraded for this release. The same DTS-HD Master Audio 5.1 track that was included on Universal's previous Blu-ray edition has been put into service once more, and it doesn't do the film any favors. When I reviewed the 2012 Blu-ray, I hoped lossless audio might be the magic bullet that would cure the sonic ills that have always plagued The Deer Hunter, but the aural malaise remained...and still remains today.

As I wrote in 2012, most of the sound emanates from the front panel of speakers, with solid stereo separation providing a distinct directional feel that enhances atmospherics and lends dialogue a more realistic flavor. The surrounds augment the scoring and some of the big war effects, such as helicopters and explosions, but fail to spit out any isolated material.

The track's main negative remains the muffled dialogue that has always been The Deer Hunter's Achilles heel. Overlapping conversations or those that try and compete with street, party, or battle sounds are almost impossible to comprehend, as are hushed exchanges. When Michael and Nick plot to ambush their captors in the river cage, I could barely make out a word, and the talk at the wedding and in the bar, though not essential, was often obscured. Boosting the volume, unfortunately, doesn't help.

Dynamic range is better than I remembered it, with the steel mill machinery, whirring chopper blades, and gunshots during the Russian roulette sequences all possessing good presence and weight. Excellent fidelity bolsters the impact of the acoustic guitar solos, and the orchestral scoring enjoys fine presence without overwhelming the action. It's tough to watch The Deer Hunter and listen to the helicopters without ruing the absence of an Atmos track, which would have brought even more atmosphere and immediacy to many sequences in the film. A new mix might somehow have been able to address the deficiencies of this one. We can only hope such an enhancement will grace a future release.

This edition also includes a DTS-HD Master Audio 2.0 stereo mix, but the dialogue isn't prioritized any better on that track.

Extras on previous home video editions of The Deer Hunter have been maddeningly slim (probably due to limited disc space caused by the film's three-hour-plus running time), but Shout! Factory finally rights that wrong, at last providing a comprehensive spate of supplements sure to please the movie's devoted legion of fans. It's too bad none of the material features Cimino, De Niro, Walken, or Streep, but the absence of such heavyweights isn't really a surprise.

The Deer Hunter is often tough to watch, but it looks spectacular in 4K UHD, especially if you have Dolby Vision capability, and this collector's release from Shout! Factory instantly becomes the definitive home video edition of this powerful Best Picture winner. The exceptional clarity and brilliant color of Dolby Vision bring director Michael Cimino's epic to life like never before, and a host of new supplements adds more context and perspective to this classic motion picture. The absence of an Atmos audio track is a bit of a downer, but the video quality alone (even the Blu-ray is an improvement over previous issues) makes this edition of The Deer Hunter more than worthy of an upgrade. Highly Recommended.