From Belgian filmmakers, Adil El Arbi & Bilall Fallah, Bad Boys for Life is a strong and wildly entertaining third chapter in the buddy-cop franchise, reuniting Will Smith & Martin Lawrence after a seventeen-year hiatus. The bad boy duo crashes into Ultra HD with an outstanding 4K HDR10 video, a highly satisfying DTS:X track but a small set of supplements. Nevertheless, the overall UHD package comes Recommended for fans of the series.

Bad Boys for Life has pulled off a couple of implausible and unexpected miracles. Considering the "stay-at-home" orders across the nation forcing cinemas to shut down, the action-comedy flick could potentially go down as the year's biggest box-office hit, banking more than its two predecessors combined. And with a plot picking up seventeen years after the events of the first sequel, the third entry in Michael Bay's popular buddy-cop franchise is a surprisingly entertaining follow-up — almost as shockingly good as the first movie, which is perhaps what has caught me most by surprise. Historically, sequels are rarely ever as good as the first movie and tend to further diminish in quality with each successive entry. However, the filmmaking pair, Adil El Arbi & Bilall Fallah, have not only dropped a worthy installment, but they have also renewed fan interest in the franchise with plans for a fourth film coming.

Adil & Bilall take over directing duties from Michael Bay, who made his directorial debut twenty-five years ago with the first movie and helped launch Will Smith's film career as an A-list action star. In this third chapter to the series, the Belgian duo now makes their feature-length debut to American audiences and prove they were the right choice for the job, demonstrating a clear understanding of what made the Bad Boys movies work and attracted audiences in the first place. It's success ultimately hinges on the camaraderie and banter between Smith and Martin Lawrence, which immediately kicks things off from the opening moments of the two racing to the hospital. Smith's Mike dashing through Miami traffic while Lawrence's Marcus screams at the several near-misses is emblematic of their relationship and of the movie: a comically loud, chaotic mess ending in a deeply touching brotherhood. 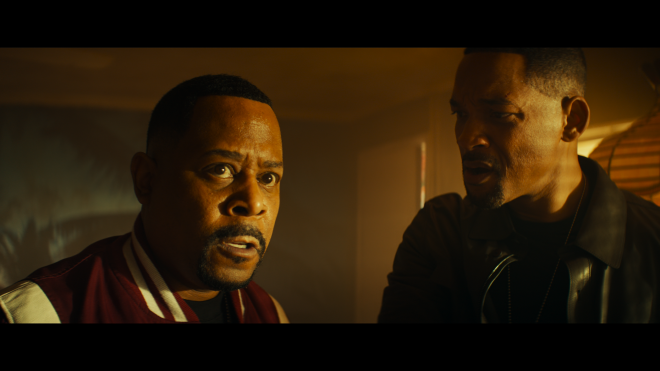 Smith and Lawrence share a convincingly unique chemistry where their friendship seems to extend beyond the screen. The two display a wonderful rhythm, as though they have really known each other since childhood, making the rapid-fire back and forth come across as genuine and believable. And the filmmakers exploit this unwavering bond and test its glue when Mike's past comes back to haunt him in a deeply painful way — injuring his ego and his unspoken sense of indestructibility. This third episode feels like a natural progression of previous events as Marcus finally turns in his badge and settles into retirement. For Mike, this feels like a betrayal, another wound to his ego that quickly spirals into obsession and causes animosity with those still working to help him, namely Joe Pantoliano's police captain and the AMMO team (Paola Núñez, Vanessa Hudgens, Alexander Ludwig and Charles Melton).

Where things start to falter is a story that slowly sinks into melodrama territory before suddenly nosediving south of the border, into telenovela country. Admittedly, this allows Smith great opportunities to flex his dramatic chops while Lawrence breaks the tension with his oddly-timed quips and hilarious observations. The scene on the airplane to Mexico is one of the funniest and memorable moments. I suppose it also makes sense for the movie to delight in histrionics considering the plot's central protagonist is Spanish-speaking television star Kate del Castillo as Isabel Aretas, widow of a cartel kingpin nicknamed "La Bruja" (the witch). Along with her son Armando (Jacob Scipio) causing all the brouhaha, the family introduces a major revelation to the series that also feels like something ripped directly from the soap opera playbook. All in all, Adil & Bilall do great with the material while Smith and Lawrence play the plot's silliness with deadpan seriousness, making it a strong and fun installment to the series.

Sony Pictures Home Entertainment brings Bad Boys for Life to Ultra HD Blu-ray as a two-disc combo pack with a flyer for a Digital Copy, which can be redeemed via sonypictures.com and Movies Anywhere. When redeeming said code, users are granted access to the HDX SDR version with legacy Dolby Digital audio, but the 4K Dolby Vision version with Dolby Atmos is available for purchasing separately. The dual-layered UHD66 disc sits comfortably opposite a Region Free, BD50 disc inside a black, eco-elite vortex case with a glossy slipcover. At startup, the disc goes straight to an interactive main menu that changes screens when switching between the usual options while music plays in the background.

The third installment in the series crashes into Ultra HD with a cracking gorgeous HEVC H.265 encode, bragging several striking enhancements over its day-and-date Blu-ray brethren.

Struck from a 2K digital intermediate, the upscaled 2160p transfer parades a noticeably boosted contrast balance, displaying resplendently crisper, more ecstatic whites and giving the locations a more energetically exotic and vibrant appeal. Many extreme wide shots even come with that looking-through-the-window effect and rise to the level of demo worthy. Specular highlights are also more intense and luminous, showing a beaming glow along the edges of clouds and a dazzling brilliance from lights without washing out the finer details while supplying metallic surfaces with a realistic polish. Likewise, black levels enjoy a notable improvement, looking silkier and inkier in the hair, clothing and various weapons. At the same time, shadow details remain plainly visible in the darkest corners of the frame, providing the 2.39:1 image with appreciable depth and attractive cinematic quality.

From the start, the HDR10 presentation is bursting at the seams with a gloriously energetic and eccentric palette, outfitting much of the action with cartoonishly fun energy. In the cold open, the streets of Miami are saturated in hot, vivid oranges and yellows as Mike's shiny cobalt blue Porsche races between cars. The grass and trees in parks bloom a lively shamrock green while the blood splatters and oozes a deeper, richer mix of garnet and scarlet reds. Some scenes, such as the Mike and Marcus footrace, the nightclub and the chase after Zway-Lo, are bathed in a variety of neon lighting, from hot fuchsia pinks and energetic lilac purples to spirited teals and dramatic cerulean blues. Other action sequences display an eye-catching mix of sprightly lime greens, fiery oranges, rich golden marigolds and bold sepias. Facial complexions appear healthy and accurately rendered to the hot southern climate while revealing every pore, wrinkle and negligible blemish in the entire cast.

Originally shot in a combination of digital cameras with resolution levels ranging from 2.8K to 4K, elements that were later mastered to a 2K DI, the 4K video boasts a welcomed uptick over its HD SDR counterpart. Granted, a couple moments sprinkled throughout look comparatively soft and of slightly lesser quality while some of the sharpest edges in a few areas fluctuate a tad. But overall, detailing is relatively sharp and very well-defined, exposing every nook and cranny inside the AMMO office while the slightest imperfection, crack and the smallest aesthetic feature in the damp, decaying Hidalgo Palace is plainly visible. Every hair in Rita and Kelly's hairdo is distinct, every whisker in the men discrete and every thread in the clothing clear-cut. The fast-paced action sequences remain striking to behold where viewers can clearly make out the small scratches on the vehicles, the individual plumes of fiery explosions and the tiniest bit of debris littering the screen. (Video Rating: 94/100)

Bad Boys reunite for one last ride, erupting into home theaters with an explosively fun and highly satisfying DTS:X soundtrack, which is "IMAX Enhanced" for those equipped. The object-based audio option may offer a couple marked enhancements over its DTS-HD counterpart, but overall, the track ultimately isn't the night-and-day upgrade anticipated and doesn't rise to the occasion when going up against the best currently available in the format.

Right from the opening moments, the sequel bursts into the scene with the chaotic insanity of Mike racing his Porsche through the streets of Maimi as sirens blare all around the listening area. The echo of tires screech through the surround speakers, and helicopters soar from the sides and very mildly through the heights while the music reverberates into all the channels. When things are calmer, birds are chirping in the distance and subtly cross the ceiling in some spots. The commotion of a bustling bar and street better envelop the listener, and electronic noises from AMMO's high-tech gear enliven the on-screen action. The best demo-worthy moment is the climactic shootout inside the Hidalgo Palace where bullets ricochet from every direction, debris lightly rains down from above, water discretely drips from every corner, and a helicopter flies overhead, generating a convincing hemispheric soundfield.

More noteworthy is the on-screen action continuously kept busy and chaotic with the hustle and bustle of the city. Whether it is birds flawlessly panning between three front channels or the loud crash of property being destroyed, of which subtly bleeds into the top heights, imaging feels broad and expansive, creating an appreciably half-dome soundstage. Meanwhile, the mid-range remains about the same with dynamic, excellent clarity and definition during the loudest, ear-piercing segments. However, the score and song selections appear to benefit moderately from the extra-breathing room, exhibiting a bit more warmth and fidelity than before. Vocals continue to be well-prioritized and precise amid the bonkers, deafening mayhem. Topping off the excitement is an impressive and terrifically robust low-end, sending of couch-shaking waves throughout the room with authoritative weight while also providing the music with a pounding presence. (DTS:X Audio Rating: 90/100)

The collection of bonus features are available on the accompanying Blu-ray disc.

Bad Boys for Life, the third installment in the buddy-cop franchise, may not be as good as the first movie, but this next chapter in the Will Smith & Martin Lawrence action series comes pretty darn close and offers a step-up over its predecessor. Taking over directing duties from Micheal Bay, Belgian filmmakers Adil El Arbi & Bilall Fallah gleefully ride into melodrama territory to give the detective duo some weight and heart, building some anticipation for a fourth episode. But whatever you're thoughts on the movie, the bad boy cops crash into Ultra HD with an outstanding 4K HDR10 video presentation and a highly satisfying "IMAX Enhanced" DTS:X soundtrack, offering fans an excellent upgrade over its Blu-ray counterpart. With a small but decent set of supplements, the overall UHD package comes recommended.