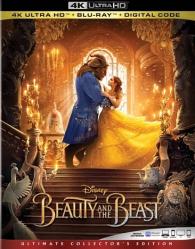 Bill Condon (Dreamgirls) directed this live-action retelling of the Disney animated classic from 1991. As before, this fairy tale centers on a young woman named Belle (Emma Watson), who is forced to live in an enchanted castle with a prince who is cursed to look like a hideous Beast (Dan Stevens). In time, the pair fall in love as Belle learns to see the good man hiding behind the Beast's monstrous exterior. The film co-stars Luke Evans as Gaston, Ewan McGregor as Lumière, Emma Thompson as Mrs. Potts, Ian McKellen as Cosgworth, Kevin Kline as Belle's father, and Josh Gad as Gaston's sidekick LeFou.