Just when you thought Mike Tyson was the cap to the trilogy, Ip Man 4: The Finale proves Donnie Yen has one more fight in him as the legendary master and teacher of Bruce Lee. This franchise peaked with the second entry and The Finale operates as little more than a fast-paced action showcase - with Scott Adkins showing he's a grossly underused action performer in mainstream action flicks. It's fun. Not historically accurate - but fun. Well Go USA delivers Ip Man 4: The Finale to 4K UHD with a pleasing upscaled transfer with Dolby Vision and a restrained - but impressive where it counts - Dolby Atmos audio mix. For fans of the franchise, this is a good watch - newcomers may feel a bit behind the curve. Recommended.

Master Ip (Donnie Yen) has lost his wife. He's also been diagnosed with throat cancer. To top it off, his son Ip Ching (Jim Liu) has been expelled from school after fighting with a bully who stole his comic book. When his star pupil Bruce Lee (Danny Chan) requests him to come to San Francisco to see him compete in a martial arts tournament, Master Ip sees this as an opportunity to find a new school for his son and close some chapters to his life before he runs out of time. Upon arrival, Master Ip is caught in a war between the traditional Kung-Fu masters lead by Wan-Zong-Hua (Wu Yue) who want to prevent Westerners from learning Chinese martial arts and white racists like Barton Geddes (Scott Adkins) who doesn't feel the U.S. Marines should adopt Eastern fighting styles. 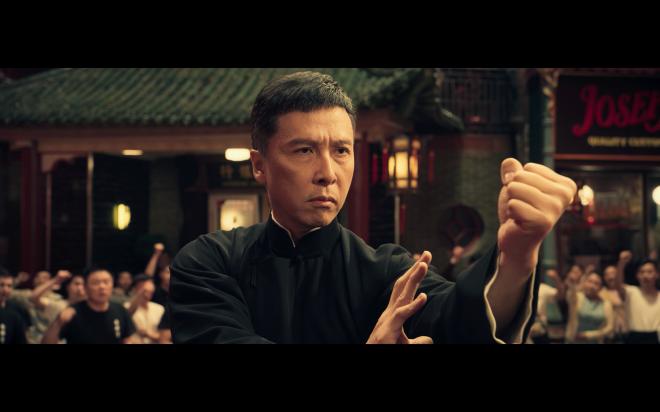 The Ip Man series has wildly deviated from historical points over the last couple entries - so those expecting a true-to-life biopic of the late master aren't going to find it here. It feels like over the last 12 years or so there's been at least as many films focused on Bruce Lee's one-time teacher. Here we finally actually get a little of Bruce Lee-styled action thanks to a solid performance from Danny Chan. There's some nice heartfelt drama here about the value of traditions, heritage, legacy, and the need to grow and adapt to new cultures and surroundings. Had the film stuck to these grounds I feel it would have been a success.

Where things falter and become more of a comic book b-movie Kung-Fu flick is with the Geddes storyline. Don't get me wrong, I love seeing Scott Adkins do his thing and he's great here chewing up the scenery - even if his accent is more than silly - but the story is a lot of hokum that takes a nicely grounded human element and turns it into a cartoon. It's an odd element that comes in halfway into the film that already established an antagonist. Adkins sadly feels like filler. Not helping matters are the English performers. While most of the film is Cantonese with little dips into English, the performances of Americans and native-English speakers is a bit rough around the edges. The language choices are too formal without any abbreviations or colloquialisms to lend any authenticity. It's just odd to hear every English speaker say every single syllable in every single word. 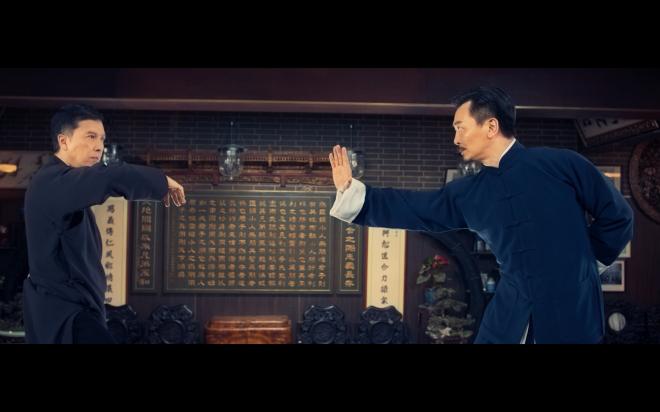 That caveat aside, Ip Man 4: The Finale does prove to be a fitting conclusion to the franchise - there really is no getting around the end of this one! I would say it's a better overall film than Ip Man 3, but this series was at its best with the first two films. We still get plenty of great action sequences thanks to Yuen Wo Ping and director Wilson Yip certainly knows how to capture a fight sequence. It's actually refreshing to see something a little more grounded with only a few overt wire-fu fighting sequences. The camera gets in nice and close and lets the fists of fury fly fast.

As I said, the Ip Man franchise isn't exactly known for its historical accuracy. It borrows from historical events and places our grandmaster Ip Man into the action. Through four films Donnie Yen has been a strong figurehead delivering one great performance after another. As the contemplative man who acts only when he has no other choice, he brings a sense of calm to extravagant action sequences and a few ridiculous plot setups. All in all, Ip Man 4: The Finale is a fine piece of martial arts entertainment that fans of the franchise should get a kick out of.

Ip Man 4: The Finale arrives on 4K thanks to Well Go USA in a two-disc 4K UHD Blu-ray + Blu-ray set. Housed in a standard black two-disc case, the disc loads to an animated main menu with traditional navigation options. All of the bonus features for this set are found on the included Blu-ray. Cantonese Dolby Atmos is the default audio track but an English dubbed DTS-HD MA 5.1 track is available in the setup submenu.

Ip Man 4: The Finale arrives on 4K UHD Blu-ray sourced from a 2K digital intermediate with HDR10 and Dolby Vision. All in all, this is a very impressive transfer with the caveat that the color scheme has been intentionally altered to fit with the mid-1960's pastel pastiche for white western culture. It's a little difficult to grade how this looks versus filmmaker intention. With that greens can skew slightly lime at times, reds a bit pinker, skin tones a little more flush. This effect was apparent on the 1080p Blu-ray and gets a bit more refinement here. Primaries like blues that appeared a bit light on the SDR Blu-ray slide towards a richer Royal Blue. Similarly, combat wounds gain a little extra crimson touch. Skin tones also appear a bit more balanced where they could slide a little more pale yellow than natural. This isn't a color scheme to compare with your average release.

Details are a little more refined here than the 1080p Blu-ray - but not by much, Upsampling from the 2K DI along with the intentional coloring softened some of the finer facial features at times. This is most apparent when Ip Man rescues a Chinese-American girl from being bullied at school - her white attackers have little to no skin texture. But then when the action moves to Chinatown or the Marine base for those impressive fight sequences, details return. It's not a terrific problem but a notable side effect of the coloring.

Black levels are superb offering deep inky blacks with wonderful shadow gradience. Nighttime fight sequences or when Bruce Lee takes on the racist Karate guys in the alleyway there are some great lighting shifts thanks to the bright neon and the dark corners. Throughout there is a well-maintained sense of image depth. Whites are also crisp without blooming or haloing. This Dolby Vision HDR treatment is a fine effort, not the best of the best, but still very good.

Both the 4K Ultra HD Blu-ray and SDR Blu-ray discs enjoy a robust and action-packed while judiciously applied Cantonese Dolby Atmos audio mix. Also included is an often laughably badly English Dubbed DTS-HD MA 5.1 mix. The application of Atmos is smartly applied to give large establishing shots the robust activity and spacing necessary while giving every action sequence plenty of oomph and presence. Key examples being when Master Ip arrives in Chinatown in San Fransisco comes to life with terrific surround presence allowing the verticals to give some pinpoint placement but mostly use to open the scene up and make the area feel vast while claustrophobic because of the city hustle and bustle.

Action sequences get the primary Atmos application allowing those surrounds to become impressively active following legs and fists fly through the screen. Likewise, if there are any aerial stunts the verticals follow the channel movements side to side and overhead. Added to that there is some excellent LFE placement. Every kick and punch lands with a nice rattle in the subwoofers to give the mix some extra presence. Through it all dialogue is crystal clear without issues.

The English Dubbed DTS-HD MA 5.1 mix is a bit of an odd duck as characters that already spoke English in various parts of the Cantonese track have been re-dubbed. I could understand this for some of the cast but Donnie Yen has a fairly strong handle of English and his voice change is pretty damn bizarre-sounding. The mix overall has a strong presence giving plenty of emphasis on the action, but it's a vastly inferior track than the included Atmos track.

Ip Man 4: The Finale brings Donnie Yen's tenure as Bruce Lee's onetime teacher to a close. The films have long veered away from historical fact in order to place our titular grandmaster front and center during various times of cultural upheaval. On the scale of the four films, The Finale is a better movie overall than Ip Man 3, but not as sharp as what we saw with the first two films.

Well Go USA delivers a solid 4K Ultra HD Blu-ray treatment to the film offering a nice overall improvement to the visual stylings of the image. The Cantonese Atmos mix lands some intense punch (and kicks) to the action giving the surround soundscape plenty of activity. Certainly far and away better than the English dubbed track. Bonus features for a franchise's final entry are sadly sparse at best. If you're a fan of the series, you'll get a lot of fun out of Ip Man 4: The Finale. If you're new to the show you'll be coming in during a ridiculous but entertaining finale show. Recommended.