Color Out Of Space is an H.P. Lovecraft adaptation from director Richard Stanley about a family whose lives are turned upside down after a mysterious meteorite crashes in their front lawn that stars Nicolas Cage. The 4K UHD image looks great and the DTS-HD 5.1 audio track sounds very good. There are a couple of bonus features as well that round out this horror gem. Highly Recommended! 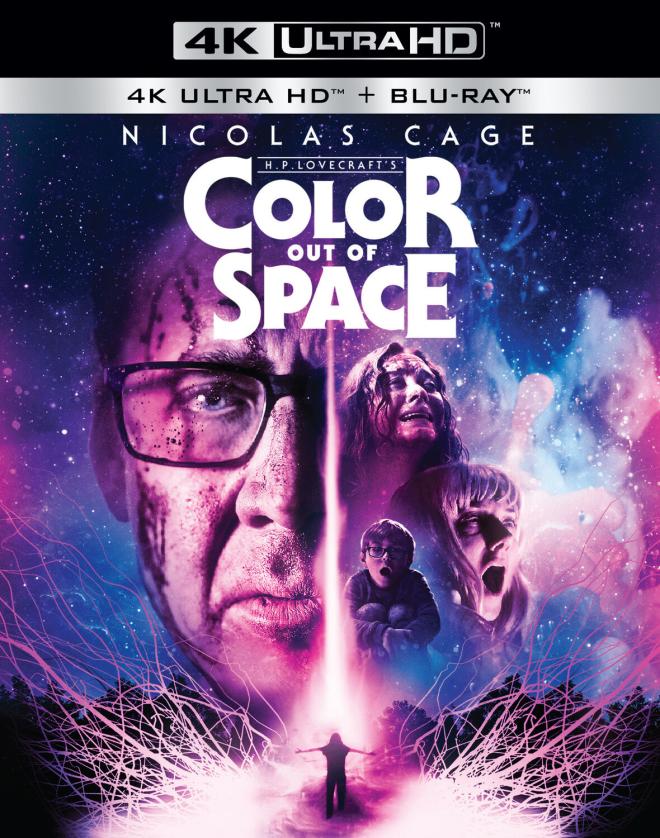 Filmmaker Richard Stanley has been through the wringer in his career, to say the least. Mostly known in the hit documentary Lost Soul that documented the turbulent production of 1996's The Island of Dr. Moreau, a dream project of which Stanley was unceremoniously let go from the director's chair. More than two decades later, Stanley is back behind the camera where he seems to be in his element with Color Out Of Space, based on H.P. Lovecraft's story that stars Nicolas Cage in a nuanced but extreme role with a group of alpacas.

Color Out Of Space centers on the Gardner family as they are just getting used to their newly inherited family farm away from the busy life of the big city. Exploring the forest and rivers surrounding them, trying to get a decent WiFi signal, and practicing the magic arts of Wicca are just some of the activities involved in their daily life. Even their conspiracy theory neighbor (Tommy Chong) has some wild musings for them every once in a while. This all changes when a strange meteorite crashes down on their property. At first, all seems good as their crops actually start to grow in large quantities and new animals flock to their farm. As time goes on, the family of five starts noticing peculiar factors that are disrupting their health and sanity that culminates in something planting itself from another world in their front yard.

John Carpenter's The Thing and Alex Garland's Annihilation are big influences in Color Out Of Space where animals and humans mutate into slimy, chaotic creatures as well as a team of people trying to study an alien-like presence that is affecting all living things in the immediate area. It's a well-defined story brought together in a darkly comedic way with Nic Cage and Joely Richardson as the married couple trying to survive the recent discovery on their property.

Richard Stanley brings his artistic eye to this hellish-nightmare that brings beauty to each scene with his bright and sci-fi color palette that just lights up the screen as we've never seen before. Most filmmakers fail when trying to adapt something from Lovecraft, but Richard Stanley hits a home run with Color Out Of Space, bringing all the necessary fundamentals to the big screen. Cage is brilliant in the film. He showcases a loving-family man but can change into some whack-job unhinged maniac on a dime, which is highly entertaining.

Color Out Of Space is the Lovecraft arrangement audiences have clamored for since Re-Animator and it doesn't disappoint.

RLJE Films infects Color Out Of Space in a two-disc set with a BD-66 4K Disc and the 1080p HD Blu-ray. The discs are housed in a hard, black plastic case with the artwork of Nic Cage and his horrified family. The cardboard cover is the same artwork as well. There is no digital code sadly for the film, but there is one for a 30-day free trial of the Shudder streaming service. 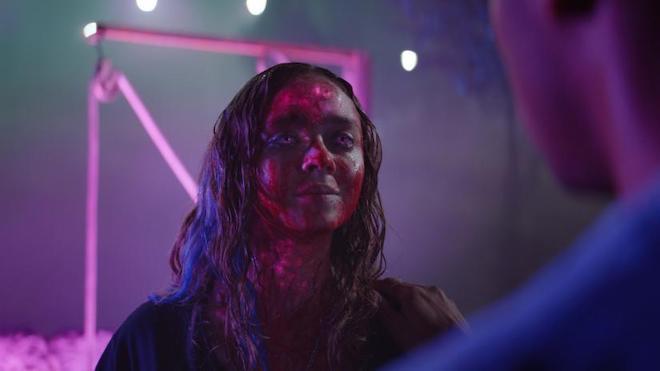 RLJE Films crashes down on Earth with the release of Color Out of Space, packed with a 2160p Ultra-HD presentation in 1.85:1 aspect ratio. Oddly, the 1080p Blu-ray version is in a 2.35:1 aspect ratio, according to the box. There is a good uptick in color and detail on this 4K Disc that looks otherworldly.

The color palette is bright and bold with a mysterious pinks and purple popping up more as the film goes on. From the start, the farm is rich in various shades of green in the leaves and grass with tall brown wooden trunks. This contrasts nicely with the primary colors of the wardrobe the actors wear such as light blue raincoats and red flannel shirts. When the meteor crashes, the vegetation, and even new life forms take on that pink and purple color, which are rich and strong. The blood and gore bring the color red to a new level as well and the black tones are deep and inky. Flesh colors are natural as well when everyone is healthy.

The detail is sharp and vivid, even in darker scenes as well as the sequences that tend to glow with bright pastel colors. The CGI alien insects are very detailed and never look computer generated and the practical gore effects bring all the necessary organs, veins, and blood droplets to the foreground. Closeups reveal nasty wounds and cuts, wrinkles, makeup effects, individual facial hairs and pores on the actor's faces which all look nice. The newly grown pink flowers can all be distinguished from each other and the background of trees and other forest-like objects never look flat. There's quite about of depth in this film visually.

Lastly, there were no big problems with any banding, aliasing, or video noise to speak of, which makes a top-of-the-line 4K presentation. 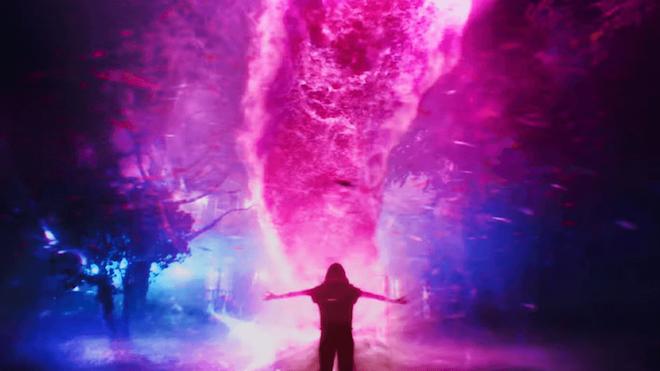 Color Out of Space comes with only a lossless DTS-HD MA 5.1 audio mix that sounds good. Unfortunately, there is no Dolby Atmos mix here. This track is creepy and haunting that brings a ton of natural and supernatural elements to the soundscape. Sound effects of cutting off certain limbs, mutating into some nasty contorted shape, and shotgun blasts pack a powerful punch.

Other ambient noises of planets growing, insects flying around, and strange forces constantly bring a scary aurora to the film. The bass kicks into high gear towards the climax of the movie and with the shotgun going off with a nice rumble to it. The score always adds to the suspense of the story and the dialogue is clear and easy to follow along with, even when Nic Cage is going berserk. There were no audio issues to speak of. 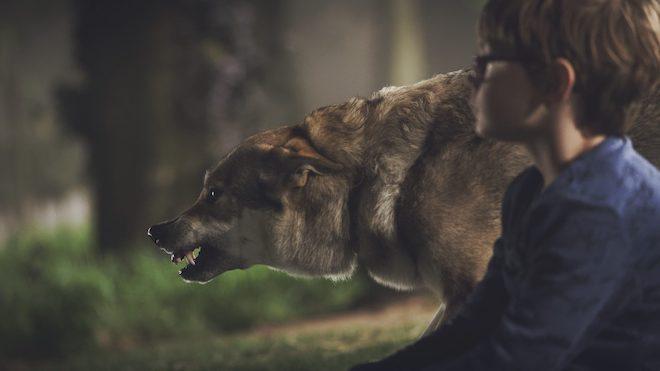 There are a little over 30 minutes of bonus material included here, featuring a behind the scenes look with cast and crew interviews, along with a few deleted scenes. 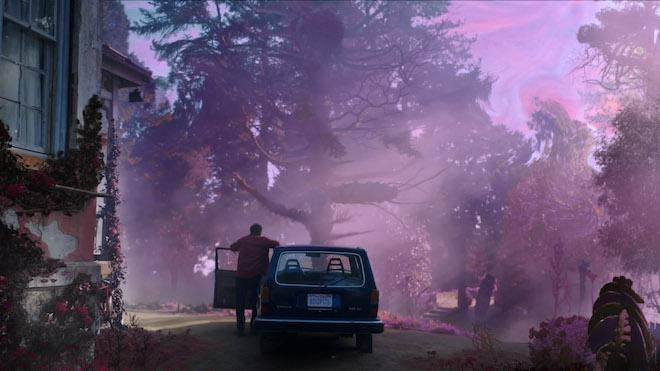 Color Out Of Space is a fantastic adaptation of Lovecraft's story with a fun performance from Nicolas Cage. Richard Stanley knocks this film out of the park and is back on top with his unique director's eye. The 4K UHD image and the DTS-HD 5.1 mix are both top-notch, however, I think the bonus features could have been a bit on the stronger side. Still, this film is Highly Recommended!