Based on Tom Clancy's 1984 novel of the same name, The Hunt for Red October is a masterful espionage thriller in the guise of a submarine combat film. Starring a superb Sean Connery and Alec Baldwin, the production about a dangerous high-tech sub going off course generates suspense and thrills with plenty of smarts as a skillful game of chess. Celebrating its 30th Anniversary, the now-classic thriller dives into the deep depths of 4K Ultra HD as a collectible SteelBook release with the same great-looking Dolby Vision presentation, an excellent Dolby TrueHD soundtrack but a small set of supplements as before. Still, the overall package makes a Recommended addition to the UHD library.

Based on the 1984 novel of the same name by Tom Clancy, the masterly crafted The Hunt for Red October adds an espionage thriller element into the submarine combat subgenre. Director John McTiernan orchestrates a game of wits and deductive guesses grounded on limited information, which only further intensifies the apprehension of battling an unseen enemy in the dark depths of the ocean. With extraordinary skill and craftsmanship, the award-nominated film carefully balances the paralleling stories of shrewdly-intelligent CIA analyst Jack Ryan (Alec Baldwin) and Soviet captain Marko Ramius (Sean Connery). Commanding a new start-of-the-art nuclear missile submarine on its maiden voyage, Ramius' decision to disobey his government's orders creates a crisis that could potentially explode into a third world war, and Ryan works diligently to estimate Ramius' next move while convincing others of his well-reasoned conclusions. Thirty years later, the film remains a magnificently smart and masterful thriller. 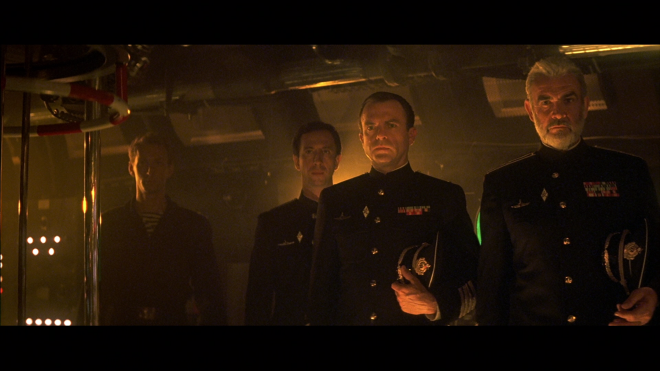 For a more in-depth take on the movie, you can read our coverage of the Jack Ryan: 5-Film Collection HERE.

Courtesy of Paramount Home Entertainment, The Hunt for Red October sets sail for its second voyage through the seas of 4K Ultra HD Blu-ray as a collectible SteelBook package dubbed the "30th Anniversary Limited Edition." The two-disc combo pack also includes a flyer with a Digital Copy code, which can be redeemed via ParamountMovies.com, allowing owners to watch a 1080p HD copy with Dolby Digital Audio. However, VUDU users could possibly unlock 4K streaming rights with Dolby Vision and Dolby Digital Plus 5.1 audio. Inside an attractive, red-orange SteelBook case, the dual-layered UHD66 disc sits comfortably atop a Region-Free BD50 disc on the same panel. At startup, viewers are taken directly to a static screen with the usual selection along the bottom and music playing in the background.

The hunt continues sailing through the rough and treacherous seas of Ultra HD with the same excellent HEVC H.265 encode from the 2018 box-set release, offering a notable improvement over the Blu-ray.

Originally shot on traditional 35mm film, the 2160p video appears faithful to Jan de Bont's heavily-stylized cinematography, which can, at times, pose some challenges for proper assessment of the picture quality. A majority of the movie was intentionally shot with diffusers to create a particular look and effect, especially during scenes taking place inside the submarines, making the overall picture noticeably softer than expected. Nevertheless, the source is in excellent condition and highly detailed with distinct, sharp lines in the clothing and revealing, lifelike facial complexions. Aside from a fair amount of blurry moments, the furniture and various aspects of the subs remain plainly visible.

Contrast is noticeably low-key and muted due to the artistic decisions mentioned above, creating a very somber, grayish tone to the plot. On the whole, levels are well-balanced and consistent with crisp, sharp whites. Although many light fixtures come with a blooming effect as part of the deliberate photography, the 4K transfer displays outstanding specular highlights, exposing the finer aspects in the brightest areas while the light glistens off the officers' metals and jacket buttons. Brightness levels are also affected somewhat, making the overall picture slightly darker than expected and showing average-looking delineation. Nevertheless, blacks are rich and oily with strong penetrating shadows, providing the 2.35 image with an appreciable three-dimensional quality.

Although the overall palette largely feels limited and lightly restrained, the Dolby Vision presentation nonetheless displays improved primaries with better saturation and variation. The reds in the lights and buttons of consoles show more range and distinct differences, from vivid cherry to dark, deep crimson. Blues are also a tad more striking and dramatic, as electrical sparks radiate with an intense surge, the many monitors inside the Red October glow a steely cobalt and the deeper water sequences are immersed in a thickly grimy teal hue. Secondary hues may not be as impressive, but the emergency lights of the subs bathe the entire frame a golden yellow shade that feels realistic.

In the end, the movie has never looked better, washed over in a thin layer of natural grain, giving the presentation a lovely and attractive film-like appeal. (Dolby Vision Video Rating: 74/100)

Similar to the video, the espionage thriller dives into the deep depths of Ultra HD with the same Dolby TrueHD 5.1 soundtrack as the previous UHD release, which delivers an excellent presentation that awesomely complements the visuals.

Originally recorded for the 70mm six-track magnetic format, which could translate to three mono channels across the screen and split surrounds, the design feels as though it may have been revamped for modern audio systems. Various nautical noises and subtle atmospherics employ the surrounds for a good chunk of the runtime with discrete placement and outstanding directionality, generating a very satisfying soundfield. A wide and welcoming soundstage comes with convincing background activity, and a distinct, dynamic mid-range maintains superb clarity throughout. Vocals are well-prioritized, and the low-end provides a sturdy presence. The lossless mix also does splendidly well when applying the receivers' Dolby Surround or DTS: Neural:X up-mixing functionality, effortlessly spreading many of the atmospherics and Basil Poledouris' original score all around the listening area. (Audio Rating: 82/100)

The same set of bonus features are available on the accompanying Blu-ray disc.

Based on the 1984 novel of the same name by Tom Clancy, The Hunt for Red October is a masterful espionage thriller in the guise of a combat film about a dangerous high-tech submarine going off course. Starring Sean Connery, Alec Baldwin, Sam Neill, James Earl Jones and Scott Glenn, the movie still delivers the suspense and thrills with plenty of smarts as a skillful game of chess. The now-classic film dives into the deep depths of 4K Ultra HD as a collectible 30th Anniversary SteelBook edition featuring the same great-looking Dolby Vision presentation and excellent Dolby TrueHD soundtrack that lends itself nicely to the receiver's up-mixing functionality. Porting over the same set of supplements as previous releases, the overall package is recommended for UHD enthusiasts and collectors.