Melina Matsoukas' Queen & Slim is a poignantly telling tale of an unlikely pair of criminals on the run layered with a weighty feel of both sorrow and beauty. Tragedy runs on Ultra HD with a lovely 4K HDR10 video presentation, an excellent Dolby Atmos soundtrack but featuring the same set of supplements. Overall, the overall UHD package is Recommended. 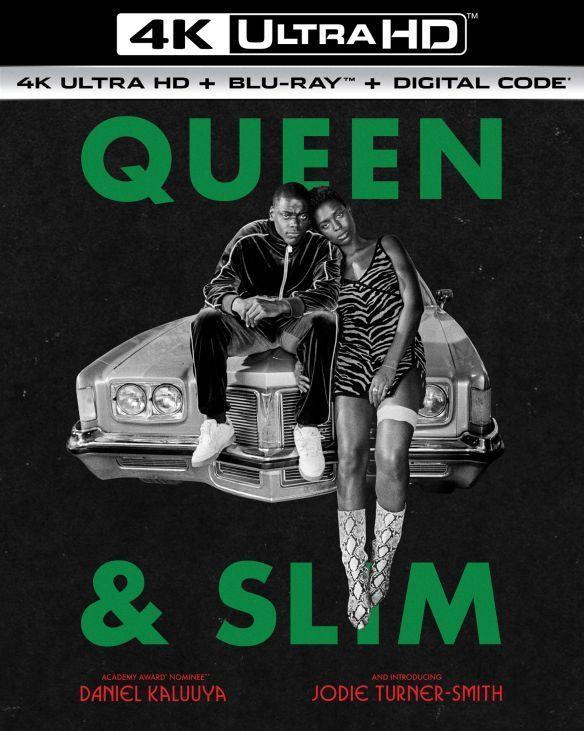 At face value, Melina Matsoukas' Queen & Slim is a straightforward but insanely tense romance of an unlikely couple forced to run from the law due to circumstances out of their control. It's as though the universe were strangely designed to bring these two together in some covertly underhanded way, yet the love that blossoms from their unlikelihood still feels serendipitous and beautifully random. The opening scenes put this in doubt since the unnamed couple (Daniel Kaluuya and Jodie Turner-Smith) are immediately at odds during a dinner date — a chance decision on Tinder made by Turner-Smith's sulky character. It's an amazingly uneasy and awkward scene as the two sit across from each other in a restaurant Kaluuya's cheerily optimistic character chose. The drive back home only grows more strained, putting the audience further on edge before the unexpected ratchets up the suspense.

From this viewpoint, the story runs a routine course, one we've seen many times before, from Bonnie and Clyde, Badlands, The Sugarland Express, True Romance, Natural Born Killers and many others. And like those, the fates have brought these reluctant star-crossed lovers together, united by a terrifying experience where a routine traffic stop ends in the death of a rather hostile police officer. Queen & Slim pointedly participates in this tradition of the road crime drama, forcing our begrudging anti-heroes, along with the audience, on a path to an emotional awakening. Driving from Ohio to Louisiana and Florida, Matsoukas, in her feature-length directorial debut, takes the pair on a journey through the disenfranchised areas of the deep South, the parts of the country ignored and neglected. With alluringly beautiful cinematography by Tat Radcliffe, the film carries a weighty burden of dejection and sorrow throughout, yet there is a strange beauty and heart thriving just behind the tragedy. 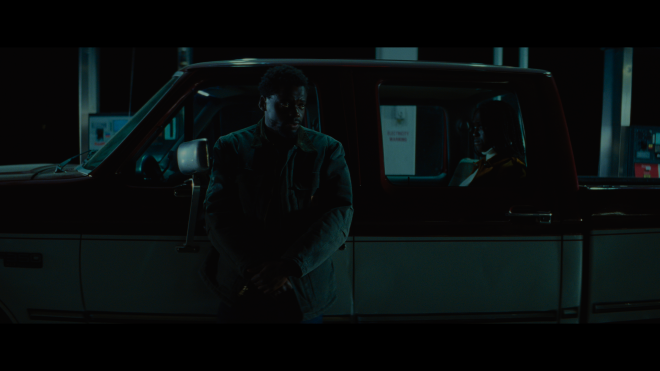 Again, Queen & Slim can be enjoyed as this simple tale deliberately running a conventional course like those mentioned above. As Uncle Earl (Bokeem Woodbine) quickly summarizes, they are "the black Bonnie and Clyde." However, there is more going on in this seemingly apolitical story. A masterfully subtle and understated sociopolitical urgency writhes beneath the surface, and any comparison to a pair of real-life criminals or archetypal movies based on them is quite telling. As Matsoukas rightfully pointed out, Bonnie and Clyde were outlaws who willfully chose that life whereas Queen & Slim are definitely not and were not given a choice. The film makes very clear the otherwise law-abiding couple shot in self-defense against a cop that not only was in the wrong but also, treated them as criminals right from the onset. Their run from the law is not glamorous but an inevitable, inexorable fate steeming from far-distant, immaterial events culminating to conditions forcing the pair to be demonized as criminals.

Understood from this perspective, we can see the deeper subtext in Lena Waithe's excellent script and Matsoukas's skillful camerawork. Kaluuya and Turner-Smith's characters are nameless until the final, tragic moments, almost asking the audience to also say their names while also leaving the public watching on news media wondering were it all went wrong. Sadly, there is no answer to that question because they did everything right, played by the rules and followed the law. She is a lawyer while he is a hard-working Christian, yet none of that served them to escape the inescapable and they are still demonized. There is something all too heart-achingly familiar about the story that unfolds. It is at once a fantasy romance in the same ilk of other young-lovers-on-the-lam dramas, but it also born out of a recognizable reality that has grown disturbingly common and into uncomfortable conversations.

Universal Studios Home Entertainment brings Queen & Slim to 4K Ultra HD Blu-ray as a two-disc combo pack that includes a Digital Copy code. When redeeming said code via Movies Anywhere, users have access to the 4K UHD version with Dolby Digital Plus 5.1 audio. The dual-layered UHD66 disc sits comfortably opposite a Region Free, BD50 disc inside a black, eco-elite case with a glossy slipcover. At startup, the disc goes straight to a static screen with the usual options along the bottom, music playing in the background and quick access to special features along the left side of the screen. 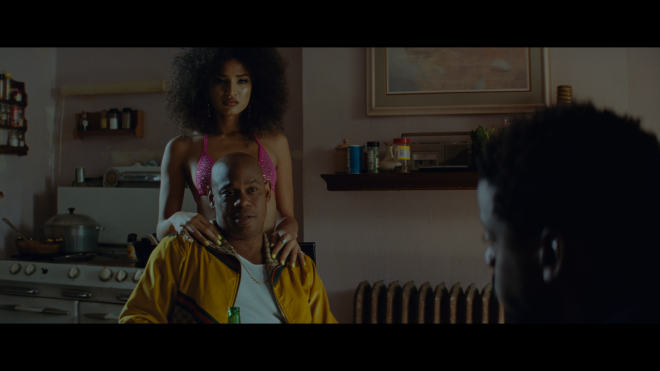 The romantic crime drama steps up its game on Ultra HD with an absolutely lovely and sometimes mesmerizing HEVC H.265 encode, offering fans a notable step up over the day-and-date Blu-ray version.

Struck from a mix of digital and 35mm footage that was finished on a 2K digital intermediate, the upscaled transfer displays slightly sharper and cleaner lines in the vehicles, the urban neighborhoods and in the architecture of various buildings. The welcomed uptick in overall definition can also be appreciated in the stitching and threading of the clothing while the individual leaves and blades of grass are a bit more distinct. Facial complexions appear healthier and more natural to the humid, Southern heat, revealing pores and minor blemishes with lifelike textures in the entire cast. Although a few sequences are slightly softer than others as a result of the filmmakers' deliberate aesthetic choice, the 2160p picture is awash with an ultrafine layer of natural gain for a beautiful film-like appearance.

The 4K video also enjoys an extraordinary boost in the brightness levels, making the movie feel more reminiscent of the theatrical experience. In fact, blacks are far more pronounced and richer throughout, especially during nighttime sequences where those midnight shadows are significantly darker and more ominous feeling. Thankfully, shadow details remain plainly visible within the darkest corners so that viewers don't miss out on the more delicate, personal facial expressions of the two main protagonists. Although overall contrast balance doesn't seem to enjoy the same significant gain, looking just as restrained and controlled as its HD SDR counterpart, whites nonetheless remain radiantly vivid and clean with brighter, sunnier daylight sequences throughout. At the same time, specular highlights are noticeably crisper and more ecstatic, providing the 2.39 image with better depth and a more resplendent sparkle, luminous glow along the clouds and the metallic chrome edges of cars.

Better yet, Tat Radcliffe's highly-stylized cinematography benefits from a more vibrant and sumptuous display of primaries. For example, Slim's jumpsuit has more of a scarlet crimson appeal to it, the green of the surrounding foliage while on the lam continuously changes from a vibrant shamrock and emerald to deep juniper pines and moss basil, and blues range from lovely cerulean skies to gorgeous navy indigos during the evening. At the same time, secondary hues benefit tremendously in this HDR10 presentation by not seeming as limited as the HD version, warming the screen with eye-catching sapphire turquoise in Uncle Earl's classic Pontiac Catalina and as well as sandy granola tans mixed with a wider range of soft browns throughout, adding a memorable impact to the drama. Lots of passionate yellows and fiery oranges in the clothing and lighting, likewise, provide a great deal of warmth to the climate along with an interesting feel of affection and comfort. (Video Rating: 86/100) 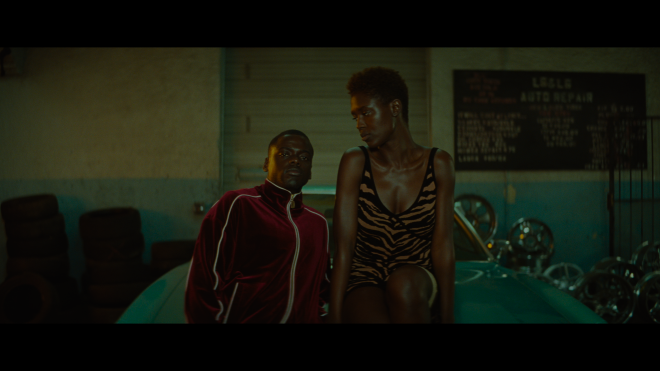 Being a character-driven drama, it should come as no surprise Melina Matsoukas's directorial debut comes with a very front-heavy Dolby Atmos soundtrack. Granted, there are a few instances where a few atmospheric effects smoothly pan into the surrounds and overheads, such as the noise of helicopters and airplanes moving across the height channels. Such moments are noticeably rare although nonetheless appreciated while Devonté Hynes's score and song selections, on the other hand, more effectively generate an immersive ambiance, echoing above the listening area. The low-end, likewise, is generally reserved for the music, providing a hefty, palpable weight to every song and awesomely reverberating throughout the entire soundscape. Much of the action and attention, however, is largely confined to an impressively broad and spacious soundstage, exhibiting a beautifully defined and highly dynamic mid-range that delivers distinct, room-penetrating clarity and warmth. All the while, vocals are very well-prioritized and precise, supplying every performance and interaction with excellent intonation and an engaging sense of gravity. (Dolby Atmos Audio Rating: 84/100) 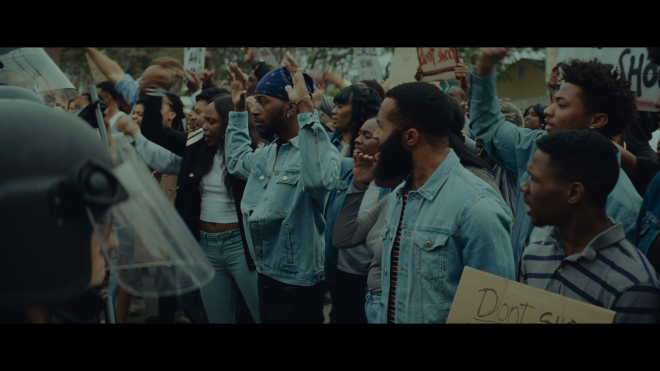 All supplemental material is shared with the accompanying Blu-ray disc. 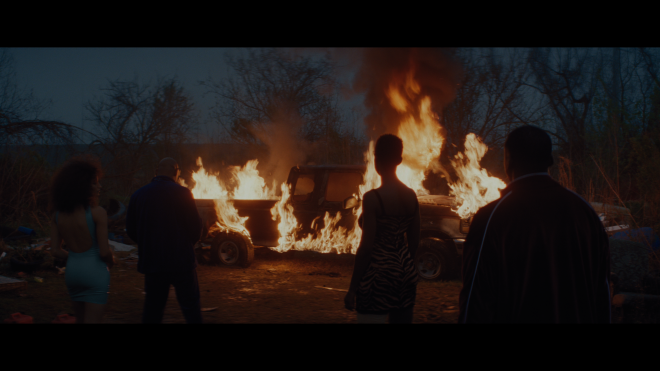 The seemingly straightforward road crime drama Queen & Slim is, on the surface, a budding romance film about an unlikely pair of fugitives. But writhing behind that simple tale of criminals on the run is a deeper, more poignant conversation about the conditions that led to their tragic ends. With outstanding performances by Daniel Kaluuya and Jodie Turner-Smith, Melina Matsoukas' film is masterfully told with a weighty feel of both sorrow and beauty. Tragedy runs on Ultra HD with a lovely 4K HDR10 video presentation and an excellent Dolby Atmos soundtrack, offering a notable step-up over its Blu-ray counterpart. Featuring the same set of supplements, the overall UHD package is recommended.