Repeating the success of the first movie with another entertainingly thoughtful tale, Frozen II captures the imagination while touching on some important, weighty concerns although it slightly stumbles in a couple spots along the journey. Past traumas land on the magical shores of Ultra HD with an enchantingly magnificent 4K HDR10 presentation, an excellent Dolby Atmos soundtrack and the same set of supplements as the Blu-ray. Overall, the UHD package is Highly Recommended for Disney animation fans everywhere.

If Frozen works as a shrewdly inventive allegory on depression, then Frozen II addresses the difficulty in confronting past traumas and the pain of making repressed memories public. The only issue is that this CG-animated sequel to the musical-fantasy megahit is nowhere nearly as subtle, creative or subversive as it clearly aspires to be. In fact, the theme is brazenly understood as the fundamental catalyst, even serving as the primary motivation for the three main protagonists, Elsa (Idina Menzel), Anna (Kristen Bell) and Kristoff (Jonathan Groff). This arguably leaves little room for the imagination while the lack of ambiguity perhaps won't generate interest for deeper readings — as is the case with the first movie. But then again, this is a Disney production aimed specifically at younger audiences. In other words, a story about two sisters learning the truth of their parents' deaths and the mysterious origins of Elsa's powers is intended to be taken at face value and is quite entertaining for it.

Picking up a few years after the events of its predecessor, the plot follows our three heroes investigating the source of a lullaby voice calling to Elsa and the cause of four sudden natural disasters plaguing the kingdom of Arendelle. Joined by the always funny snowman Olaf (Josh Gad) and Kristoff's charismatic reindeer Sven, the trio's search takes them to the Enchanted Forest, which is bordered — more like protected — by a thick wall of mist. However, this stop, where they meet a troop of Arendellian soldiers still fighting a decades-old battle with the Northuldra people, turns out to be a brief detour from the sisters' true destination — a mythical river called Ahtohallan that leads to ancient glacier. The journey there is easily the film's greatest strength, filling the screen with the stunning beauty of a natural world untouched by modern civilization. The forest definitely lives up to its name with a magical, feast for the eyes visuals of elemental spirits, giant rock monsters and hypnotic action sequences. 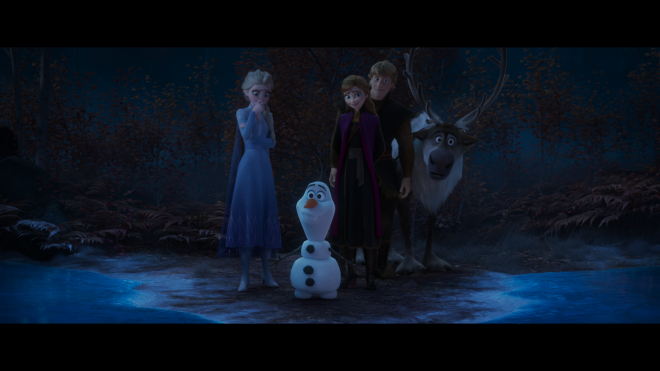 In spite of the immensely gorgeous animation, however, Frozen II turns down a somewhat questionable road when the mystery of the four elemental spirits' wrath borrows its solution from Luc Besson's The Fifth Element. On its own, it's not all that terrible or entirely unexpected for a Disney production to finish on a schmaltzy note, but it's nonetheless maudlin and predictably hackneyed. To its credit though, the filmmakers make better use of the sisters' spiritual connection to nature as a careful balancing but complementary act — a personal song of fire and ice that ultimately makes for a satisfying conclusion. And there is also something to be said about the subplot battle between Northuldra people and the Arendellian soldiers as a parable for the historical injustices inflicted upon indigenous people, a tense and strained relationship that can't be solved without first tearing down the dams blocking the conversation. It's an admirable touch to a strong and relatively thoughtful animated sequel.

Walt Disney Studios Home Entertainment brings Frozen II to 4K Ultra HD Blu-ray as a two-disc combo pack with a flyer for a Disney Digital Copy. When redeeming said code via RedeemDigitalMovie.com or MoviesAnywhere, users have access to the 4K digital version in Dolby Vision HDR with Dolby Atmos audio. The dual-layered UHD66 disc sits comfortably opposite a Region Free, BD50 disc inside a black, eco-vortex case with a glossy, lightly-embossed slipcover. At startup, viewers are taken to a static screen where owners can choose between the start of the movie or look through a sparkling, animated menu.

The sins of the past are exposed on the magical shores of Ultra HD thanks to an enchantingly magnificent and bewitching HEVC H.265 encode, transported directly from its 2K digital source. The upscaled transfer enjoys a slight but welcomed uptick in overall definition, showing marginally sharper features along the tree bark, every blade of grass and in the individual leaves. The stitching in the clothing and discrete hairs in the fur are a bit more detailed, and we can make out the small pockmarks in the rock characters. As with its HD brethren, facial complexions are quite stunning and impressive, revealing the finer wrinkles and freckles in several characters. In the end, however, the jump is relatively small with a few minor instances of very negligible wavering along the sharpest edges in the background.

The more appreciable improvement is definitely the parade of sumptuous colors showering every scene with an electrifying array of blues and a richly-saturated collection of greens. From Elsa's clothing and ice powers, a good portion of the action brightens the screen with frosty arctic and sapphire teal shades mixed with deep indigos and cobalt navy casts in the background, and the surrounding foliage ranges between emerald shamrock in the grass and juniper tones in the forest trees and moss of trolls. The rest of the action is swimming in lush soft pastels when visiting the Enchanted Forest, especially the gorgeous Autumn blends of tangerine oranges, marigold yellows and ginger cider browns. Some of the more eye-catching moments are sequences soaking in a lovely arrangement of sandy beiges, granola tans and full-bodied sepias while musical numbers are engulfed in animated fuschia pinks, lively violets and attractive lilac lavenders.

Still, the biggest and arguably most dramatic upgrade is by far the contrast and brightness balance, bathing the CG visuals in resplendently bright, squeaky-clean whites. The small, individual ice crystals in the snow have a more intense sparkle, the edge of ice sculptures radiate with twinkling glow, the sunshine of daylight sequences is more spirited, and viewers can plainly make out the discrete details in the snowflake pattern of Olaf's permafrost body. Meanwhile, black levels come with a silkier, more luxurious appeal and inky-rich shadows, providing the 2.39:1 image with a lovely cinematic beauty and an appreciable three-dimensional quality. (Video Rating: 92/100)

As mentioned on the Blu-ray edition, the animated sequel debuts with a Dolby Atmos soundtrack requiring a minor adjustment to the master volume in order to better appreciate the many positives. After boosting the volume 5dB higher than usual, the object-based design boasts several notable improvements over its lossless DTS-HD counterpart, immediately displaying a slightly wider and broader soundstage.

Background activity convincingly moves across the screen and into the off-screen space with flawless ease, employing the top heights on several occasions for creating a highly-engaging half-dome soundscape. The score and song selections also enjoy a slightly richer and better-defined mid-range while dialogue maintains excellent clarity and precision. A potent and surprisingly robust low-end provides a weighty, notable impact to certain visuals, especially those moments involving the rock creatures and the many musical numbers.

The best, noteworthy improvements are the various atmospherics extending across the height channels, adding a welcomed complementary layer of ambiance to the spirited visuals. While the surrounds fill the room with music, the occasion chatter of people and other random effects during action sequences, the enchanting sounds of the forest and the rock monsters subtly spill into the overheads, generating a frequently satisfying hemispheric soundfield. It's not always consistent and it doesn't quite compare to some of the best the format has to offer, but the track delivers a strong and effective upgrade. (Dolby Atmos Audio Rating: 88/100)

Aside from the sing-along feature on the UHD, all bonus material is the same set enjoyed on the day-and-date Blu-ray release and available on the accompanying HD disc.

Picking up a few years after the events of its predecessor, Frozen II repeats the success of the first movie with another thoughtful tale that captures the imaginations of audiences. Starring Kristen Bell, Idina Menzel, Josh Gad and Jonathan Groff reprising their roles, the plot also touches on some important, more weighty concerns while on a journey of confronting past traumas and repressed memories. The sins of the past are exposed on the magical shores of Ultra HD with an enchantingly magnificent 4K HDR10 presentation and an excellent Dolby Atmos soundtrack, offering fans a notable upgrade over its HD SDR counterpart worth checking out. Sharing the same set of supplements as the day-and-date Blu-ray release, the overall UHD package is highly recommended for Disney animation fans everywhere.