IMAX's Turtle Odyssey: Bunji's Big Adventure offers up strikingly beautiful imagery to the wild adventure of one little sea turtle. Focusing on a specific species, this nature documentary gives the audience the full breadth of the natural and man-made challenges these flippered critters face. Shout Factory brings Turtle Odyssey to 4K Ultra HD Blu-ray with a beautiful native 4K HDR10 transfer and a lively audio mix. It may not be the best IMAX nature documentary produced, but the images brought to your screen are near demo-quality making this disc an easy showpiece - while informing people. Recommended. 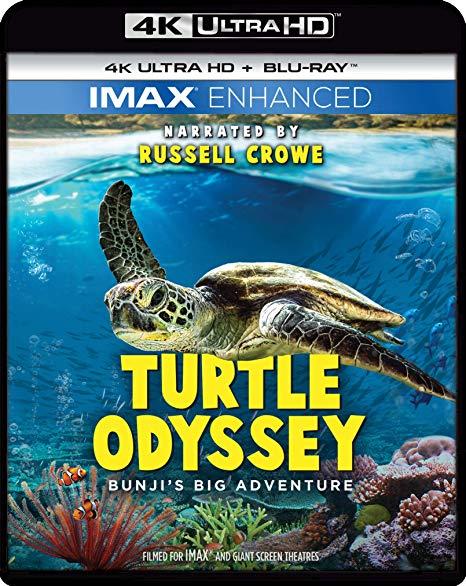 Bunji is a green sea turtle born on the shores of Australia. As a little turtle, she'll have an incredible adventure as she races for the open ocean, dodges lethal hungry seagulls, sharks and faces any number of man-made obstacles. As Bunji grows, Russell Crowe effectively narrates her adventures giving an impressive amount of detail to the proceedings about each obstacle she faces. 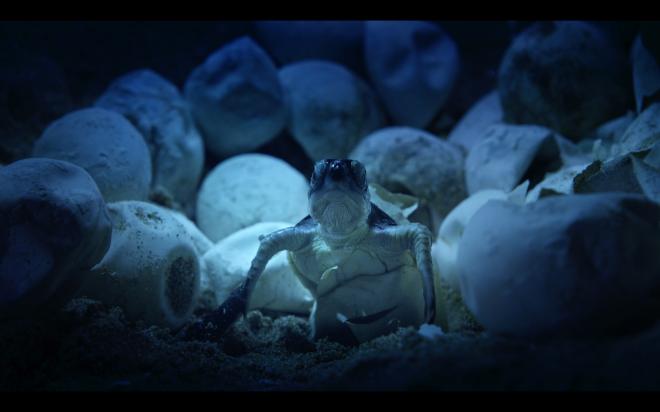 If you've seen enough nature documentaries, Turtle Odyssey doesn't really hold a lot of surprises. These films have a pretty standard structure of introducing the scenario for the critter, what factors play into things, and how the creature avoids death or injury. I first got to encounter sea turtles when I was a kid snorkeling and it was an amazing thing to see. I desperately wanted to have one as a pet, but when you encounter a full-grown adult turtle you quickly realize why you can't! They're massive! Ever since I was a kid I read about these creatures and over the years felt like I'd gleaned plenty of information about them. Even with a better than average baseline, Turtle Odyssey managed a few surprises.

The big thing I learned from this nature documentary is that when sea turtles are very small, they hitch a ride on floating islands of seaweed! I'd heard they made it to open water and that they used underwater currents to zip around the world - but I assumed they did that when they were little too! Apparently not! They ride on the seaweed to let themselves grow and the seaweed provides them camouflage cover from predators while also giving them something to snack on. I thought that was pretty cool.

Through it all, Russell Crowe does a fine enough job narrating the show. Sometimes he can sound a bit too sleepy for his own good, but for the most part, he does alright. He's no David Attenborough but then few are. At 41-minutes in length, Turtle Odyssey is given enough time to introduce us to Bunji and the trials and tribulations she faces in her lifespan. It's intended to inform and entertain so it does pull a couple of punches - particularly with predators or injuries turtles face with propeller blades. 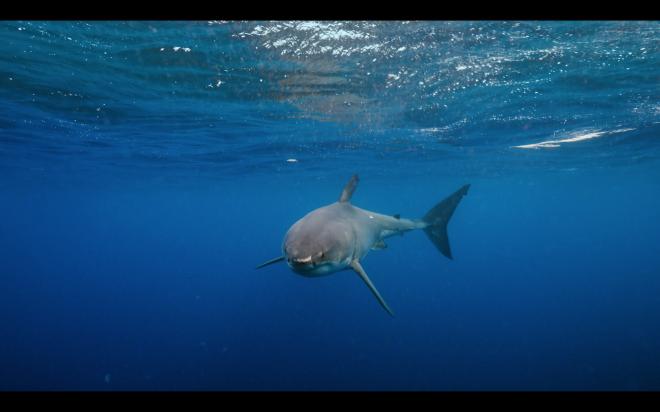 Sourced from a 4K digital intermediate, this native 2160p HDR10 presentation really shines - as in keeping with previous IMAX 4K documentary releases. Details are incredible allowing you to soak in all of the intricacies of the photography. Close-ups of the turtles, fish, and other critters look the best, middle shots also look great. Wide shots are subject to location and lighting. Scenes in shallow waters with reef critters allow for a nice open deep-looking image. Scenes out in open water could look a little flat as the various animals swim around what is effectively a dark blue/black background. When you get some sense of sunlight in the water the sense of image depth really opens up nicely.

HDR10 is used smartly here allowing for bold primaries to really pop. Blue is an obvious standout, but yellows and reds find nice moments to shine as well. Shades of green also take on a stronger luminance here than with the included 1080p transfer. The 1080p SDR disc looks great considering the source elements, but the 4K disc wins the color war easily. Black levels and contrast are on point so there's never an issue with crush or blooming. 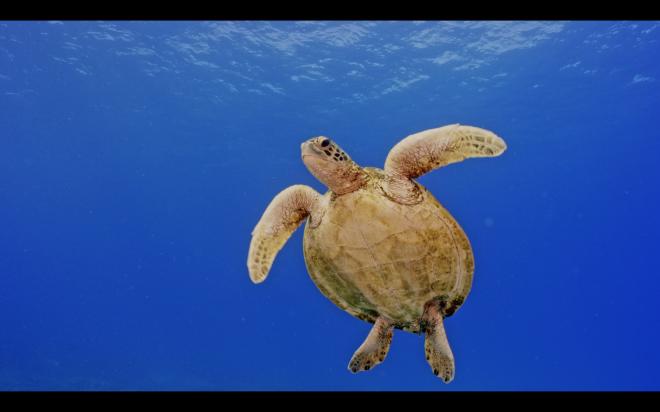 While not an action-packed documentary, Turtle Odyssey earns some nice marks with a strong DTS:X audio mix but it's also held back by the nature of the documentary. The most impressive aspect of the object placement is the sense of immersion in the ocean. There's a desirable muffled sound that keeps the overheads and surround channels engaged throughout. Specific sound effects themselves may not be as impactful as much of the show takes place underwater. To that end, music and Russell Crowe's voice dominate the mix. Unlike some of the other IMAX documentaries that have been released to the format, there's just not a lot to hear underwater. It's not like these turtles roar! To that end, this mix earns points for being natural. When the camera is above water the mix opens up and provides much more specific object-placement audio. The best effect is whenever the camera drifts along the waterline mixing the low underwater tones with the higher normal out of water sounds giving the channels plenty of work. They could have easily added silly sound effects to spice things up but thankfully they didn't go that route. 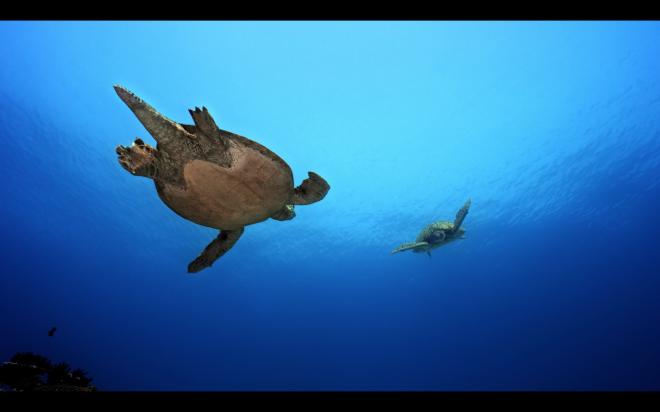 Bonus features for Turtle Odyssey are on the light side with an interview with Senior Conservation Officer Dr. Ian Bell rounding out the show. It's a solid interview but there isn't a whole lot here at the end of the day. 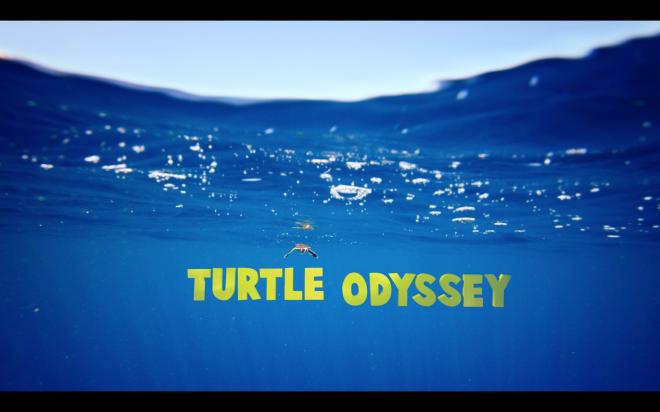 IMAX's Turtle Odyssey: Bunji's Big Adventure is a solid little nature documentary. With a short runtime and narrow species focus, there's a lot of great information to be gleaned from this show while dazzling you with some incredibly beautiful imagery. I thought I knew a lot of the details about sea turtles but Odyssey offered up a few fun new nuggets of info I didn't know before - so that was a real treat.

As a nature documentary, you're here for the dazzling imagery and this native 4K HDR10 presentation never falters. Details are exquisite allowing viewers to fully appreciate a large swath of underwater critters. HDR10 allows for a clear improvement in colors, black levels, and contrast really bringing the image to life with an often stunning presentation. While limited due to the underwater locations, the DTS:X mix does offer some immersive qualities and when the camera moves above water we gain some truly distinct object placement in addition to excellent scoring and a nice pleasant narration from Russell Crowe. Turtle Odyssey may not be the greatest of nature documentaries, but as a 4K release, it offers some great information while dazzling you with some gorgeous imagery. For those inclined consider this one Recommended.