A Beautiful Day In The Neighborhood - 4K Ultra HD Blu-ray

A Beautiful Day in the Neighborhood salutes children's television icon Fred Rogers, but it's not really about him...and that's why this intimate, heartwarming film only rarely rises above the mundane. Tom Hanks' Oscar-nominated performance elevates this all-too-familiar family drama that only really comes alive when it focuses on the kind, patient, wonderfully wise man many of us grew up with. The film never quite maximizes the capabilities of 4K UHD or DTS:X, but the HDR presentation and lossless audio are crisp and clean, and several supplements sweeten the release. I would have preferred a more straightforward Fred Rogers biopic, but there's merit in this perspective, too, which makes this quiet, cozy movie worth a look. 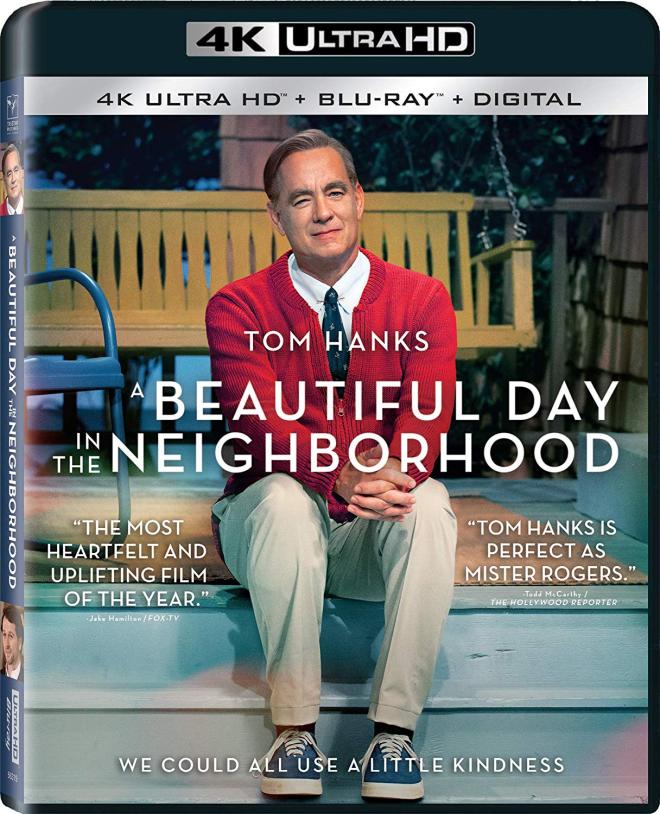 Before Sesame Street, before The Electric Company, before Barney the Dinosaur and Thomas the Tank Engine, there was Mister Rogers' Neighborhood. I grew up with it, my kids grew up with it, and chances are, most of you grew up with it, too. It may not have possessed the cachet of other children's programming, but it had staying power and filled a necessary niche in the genre. (It also had an iconic theme song that's been playing on an endless loop in my brain ever since this disc landed on my doorstep!) Sure, when we outgrew the show, we occasionally mocked its eponymous host, Fred Rogers - his sugary sweetness, sing-songy speech patterns, and ultra-sensitive persona - but when we finally matured and had kids of our own, we realized the essential void he filled and rightfully revered him.

That reverence oozes from almost every frame of A Beautiful Day in the Neighborhood, which depicts not only the meaningful manner in which Rogers interacted with and influenced children, but more importantly how this TV icon helps one adult come to terms with painful personal issues and begin the healing process. Director Marielle Heller's film is not a biopic; its focus is limited to a brief episode in 1998 when Esquire magazine writer Tom Junod profiled Rogers for a special issue celebrating American heroes. What began as a run-of-the-mill assignment for Junod evolved into a long-standing friendship, mostly because Rogers turned the tables on his interviewer and inspired Junod to look inward and reevaluate his life.

Junod's name is changed to Lloyd Vogel for the film, which is merely "inspired" by the true events described above. Workaholic Lloyd (Matthew Rhys) is married with an infant child and struggling to manage his new, stressful responsibilities. At his sister's third wedding, he's forced to confront his estranged jerk of a father (Chris Cooper), and almost instantly, decades-old resentments and long-repressed anger bubble to the surface. The two come to blows at the reception, and days after their violent fistfight, Lloyd's editor (Christine Lahti) assigns her nonplussed, chagrined writer the Rogers profile. 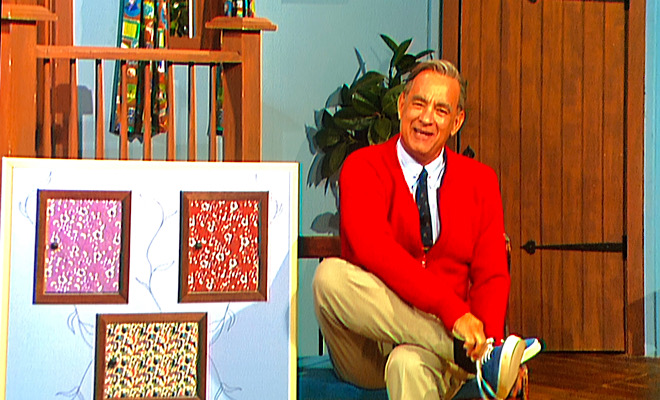 Still nursing his wounds from the ugly confrontation, a somewhat sullen Lloyd goes to interview Rogers (Tom Hanks), who quickly quells his cynicism with his trademark altruism, warmth, and empathy. Rogers is just what Lloyd expects, only more so, and when he realizes "Mister Rogers" isn't simply a made-up character, but rather the man himself, he's utterly disarmed. As Lloyd tries to figure out what makes this unique human being tick, Rogers - much like he tries to do with his preschool viewers - subtly teaches Lloyd how to open up, express his feelings, accept and embrace his emotions, and heal his long-festering hurt.

There's a reason why Tom Hanks was nominated for a Best Supporting Actor Oscar despite receiving above-the-title billing and dominating the picture's ad campaign. Quite simply, Fred Rogers is a supporting character in his own movie. Though his aura looms large, the story belongs to Lloyd, and unfortunately, that harms the film. Yes, Lloyd's arc is touching, uplifting, and life-affirming, but we've seen it so many times before in so many other motion pictures. It may be universally relatable, but it's also stale and trite. When Mister Rogers is off the screen, A Beautiful Day in the Neighborhood loses its luster, yet even when he's front and center, his gentle counseling about compassion, caring, and forgiveness often lends the film the feel of an ABC Afterschool Special for adults.

Of course, another reason why Hanks nabbed an Oscar nod is his superior performance. Hanks has made a habit of portraying real-life figures of late, including Captain Richard Phillips, Walt Disney, "Sully" Sullenberger, and Ben Bradlee, and he brings his patented authenticity to this difficult role as well. While it would be easy to overdo Mister Rogers' mannerisms and inimitable voice, Hanks resists the temptation, choosing instead to quietly evoke the man's essence. The result is a beautifully modulated, understated, yet still powerful piece of work that raises a mediocre film to a higher plane. 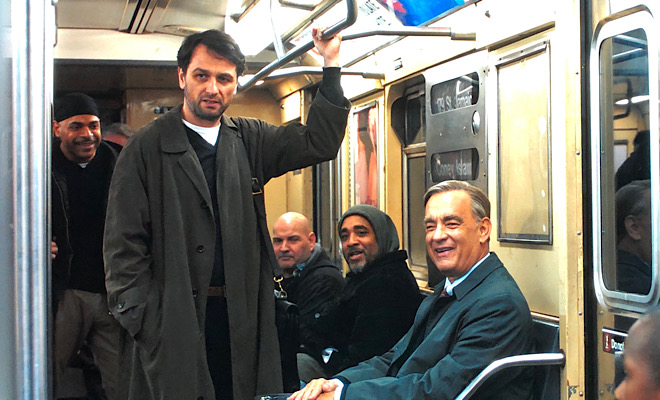 Rhys, Cooper, and the rest of the cast are good, too, and Heller infuses the film with charm, sweetness, warmth, and a bit of wonder. (I especially like how she uses tracking shots of Mister Rogers' miniature city models as transitions when the characters travel from place to place...a lovely whimsical touch.) Unfortunately, none of it resonates as much as it should, or half as much as the exceptional documentary about Fred Rogers, 2018's Won't You Be My Neighbor?. Heller produces an honorable tribute, but all too often it only scratches the surface. That might be fitting, considering what a private man Rogers was, but the byproduct is a movie that doesn't move us as much as we wish it would.

With all the vitriol that's being spewed these days, the message of kindness, kinship, love, and understanding that A Beautiful Day in the Neighborhood espouses is welcome indeed. If all of our neighborhoods could be more reflective of those ideals, the world would certainly be a better place. It's just too bad the vessel this film uses to convey such important themes feels so clichéd. Mister Rogers surely hoped to change the world one person at a time, and A Beautiful Day in the Neighborhood accurately reflects that viewpoint. He spoke softly, but his influence was profound. Everyone can learn from him, no matter their age, and that's probably this wistful film's most lasting takeaway. 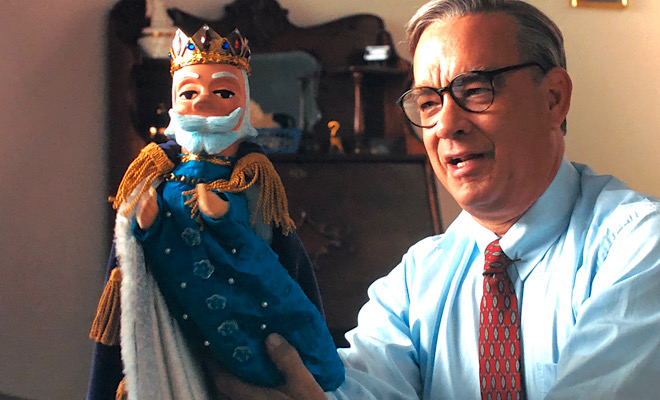 A Beautiful Day in the Neighborhood arrives on 4K UHD packaged in a standard case inside a sleeve. A Blu-ray disc and leaflet containing a code to access the Movies Anywhere digital copy are tucked inside the front cover. Video codec is 2160p HEVC/H.265 HDR10 and audio is 12.1 DTS:X MA. Once the disc is inserted into the player, previews for Little Women and Jumanji: The Next Level precede the static menu with music. 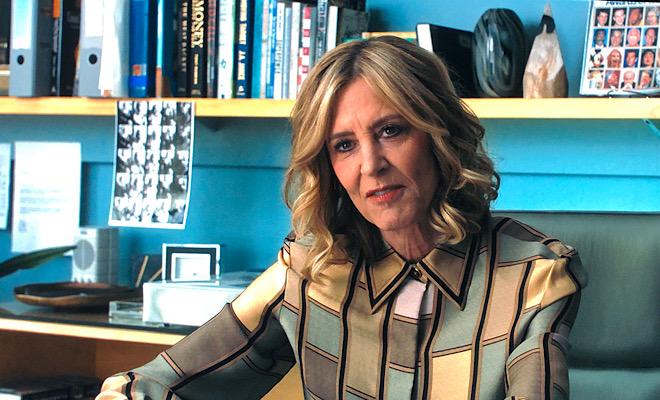 A Beautiful Day in the Neighborhood looks beautiful in 4K UHD, but not nearly as beautiful as bolder, more visually arresting features that possess an inherent wow factor. Like its subject, the cinematography is low key and non-confrontational, exuding a warm, creamy look that's nicely rendered by the 2160p HEVC/H.265 HDR10 transfer. And like its subject's television program, the Mister Rogers' Neighborhood sequences all were quite appropriately - and wisely - shot on lower resolution video cameras to give them an authentic look. The trouble is such footage doesn't look so hot when upscaled to 4K UHD. It's not nearly as bad as watching a VHS tape on an OLED display, but the frequent interjection of these low-res sequences somewhat dulls the 4K UHD experience. The video footage does look like 1970s video footage, complete with interlaced lines, bleeding colors, and a slightly diffused appearance, and that's a good thing from an artistic standpoint. Just be forewarned...if you're looking for lots of eye candy and a steady stream of 4K UHD splendor, you won't find it here.

But that doesn't mean this isn't a good transfer. Razor sharp clarity brings out the fine details of clothing weaves and upholstery textures, while dazzlingly crisp close-ups showcase pores, hair follicles, and blemishes with marvelous accuracy. The overall color palette is a tad muted, but Mister Rogers' red sweater looks lush and vibrant, and the pastels of the make-believe neighborhood buildings flaunt distinct hue gradations. Black levels are rich and deep, shadow delineation is good, and no anomalies mar the pristine print.

As far as 4K UHD transfers go, this one remains true to its source, which is all we can really ask for. It just won't knock your socks off because the movie lacks any eye-popping visuals. Some films lend themselves to 4K UHD better than others, and aficionados of the format might find A Beautiful Day in the Neighborhood a bit lacking in that regard. It's still a nice step from the Blu-ray transfer, however, with bolder colors, greater clarity, and more vibrancy. 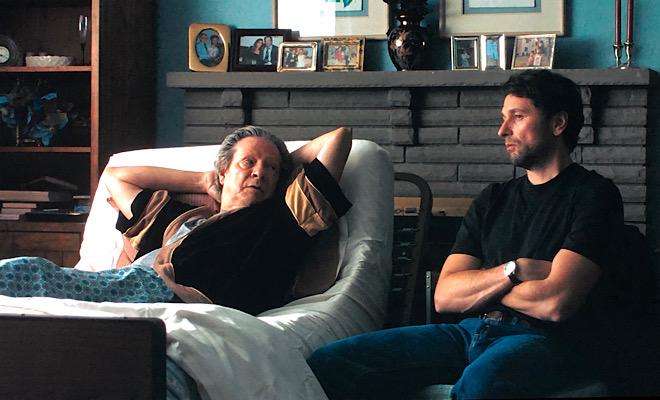 A Beautiful Day in the Neighborhood is a relatively sedate film, so it never maximizes the capabilities of its 12.1 DTS:X MA track. Don't get me wrong; the sound is impressive, but lacks the wow factor a more active movie would certainly supply. Surround effects are evident, with subtle atmospherics and bits of scoring nicely bleeding into the rear speakers, and plenty of stereo separation effectively widens the soundscape. Overhead audio, though, is lacking, and that's hardly a surprise. Bass frequencies are surprisingly strong - I actually had to adjust my subwoofer setting because the rumbles were overpowering the mix and causing distortion. Once I achieved the proper balance, the audio exhibited plenty of nuance, and the wide dynamic scale embraced all the highs and lows of Nate Heller's music score. All the dialogue is well prioritized and easy to comprehend, and the track seamlessly complements the video without calling undue attention to itself. This is hardly a demo track, but it suits its subject well, and definitely outclasses it's less expansive counterpart on the Blu-ray disc. 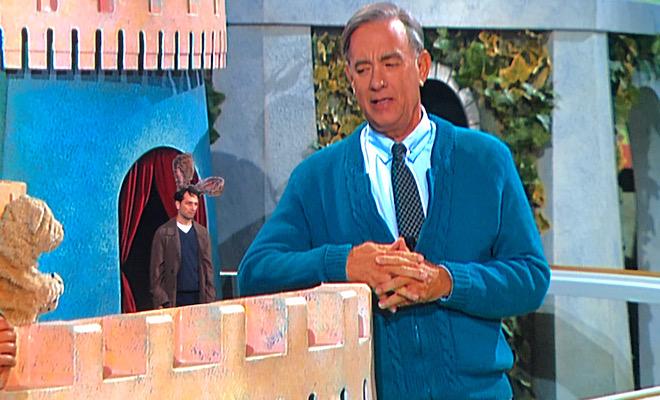 All the extras reside on the Blu-ray disc, and the amount of material is extensive. 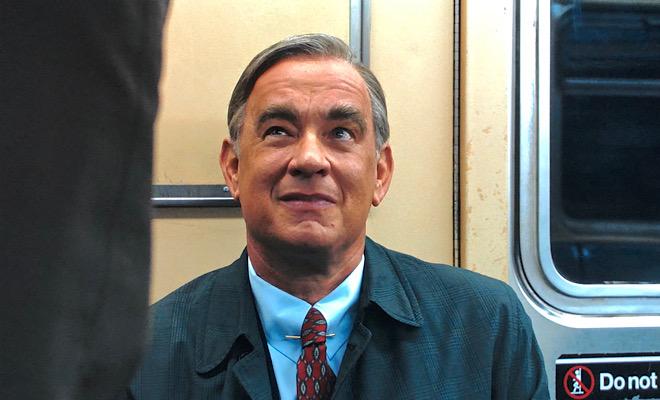 If you're looking for a Fred Rogers biopic, A Beautiful Day in the Neighborhood will likely disappoint you. But if you're interested in a heartfelt salute to a children's television icon that showcases his empathetic character and ability to connect with and bolster the outlook of people of all ages, then you might just embrace this sincere, sweet film. Tom Hanks' uncanny incarnation of Mister Rogers makes the movie worth seeing, and almost salvages a ho-hum family-in-crisis narrative that we've seen way too many times before. Sony's 4K UHD presentation is crisp and clean, but it doesn't have much to work with. Ditto the 12.1 DTS:X MA soundtrack. Several extras enhance the release, which is worth a look if only to honor a true American hero.