From the visionary director of Ice Pirates and Mac and Me comes the emotionally stirring Tammy and the T-Rex. Starring pre-Starship Troopers Denise Richards and a slower less angry Paul Walker, this camp cult classic lands firmly in the "so bad it's good" category, and may not be the right flavor for everyone - but it's fun! Vinegar Syndrome upgrades Tammy and the T-Rex to delivering an impressive native 4K Ultra HD with Dolby Vision HDR transfer and a spot on DTS-HD MA 2.0 stereo mix with a bunch of great bonus features. If you love cult classics - Vinegar Syndrome delivered a big'un - Highly Recommended.

"You have Michael's brain?"

All Michael (Paul Walker - in the role of a lifetime) wants is to be with Tammy (Denise Richards also in the role of a lifetime). Tammy wants the same - but Tammy's ex-boyfriend Billy (George Pilgrim) has other plans. After beating Michael nearly to death, Billy leaves him to be eaten by an escaped lion! On death's door, Michael is body-snatched by the mad scientist Dr. Watchenstein (Terry Kiser) and his nurse Helga (Ellen Dubin) with the purpose of transplanting Michael's brain into a giant mechanical Tyrannosaurus Rex! When Michael wakes up - he's got the means for revenge in his tiny claws and sharp teeth - but how the hell is he going to explain this to Tammy? 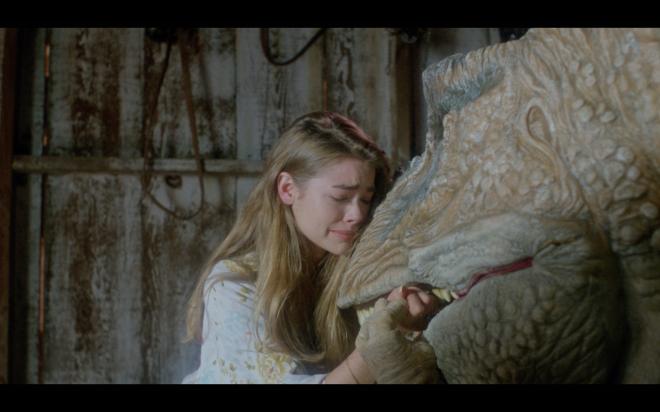 Pay close attention to the opening credits of this full uncut version of the film to have a clear idea of what sort of film you're about to get yourself into. When "Tanny and the Teenage T-Rex" pops up - no one apparently noticed they misspelled "Tammy." But that's okay - they'll catch it later, right? Naw. When Denise Richards pops on-screen again "Tanny" is credited. One could pass off that maybe they're being clever with her name - only no one calls her Tanny. It's Tammy. Those opening credits are where you'll want to buckle your seatbelt because it's going to be a bumpy ride.

Tammy and the T-Rex is the sort of camp cult classic that teeters precariously close to being entirely too self-aware for its own good. The setup, the staging of action scenes, Dr. Watchenstein's bat guano plan - all of it in lesser hands than director Stewart Raffill would have fallen apart and become an unbearable slog. The manic energy, the actually impressive mechanical T-Rex, Terry Kiser's full-blown performance, and the movie's terrific and comedically timed gore effects to keep this dinosaur from quick extinction. Where things start to falter is in the latter half when it's just T-Rex Michael and Tammy trying to figure out their relationship. That's where this self-awareness can go a bit towards the dark side of ridiculous. But most of the movie is a hell of a ride and if you've had a couple of drinks or a recently legalized on the state level controlled substance in your system - it should be even better!

In my own teenage years, I'd heard of Tammy and the T-Rex - my local Mom & Pop video shop had a copy that was always rented out so I never got to see it for myself. Never seeing it on cable it just became a movie I forgot about until Vinegar Syndrome had to pull this one out of their impressive bag of tricks. It's a hoot. On the Blu-ray, the SD PG-13 cut shows how much better this version is. If you saw it long ago and were non-plussed by it - you haven't seen anything until you've seen a T-Rex bite the head off of Children of the Corn's John Franklin! If anything it's the stunt casting of numerous familiar faces like George Flower, Ken Carpenter, J. Jay Saunders, Sean Whalen, and Napoleon Dynamite's Efren Ramirez as a pizza boy that adds a little extra flavor to the show. Probably not a movie for everyone in the room but if you love some camp in your cult classic cheese, Tammy and the T-Rex should fit the evening's bill nicely.

Vinegar Syndrome crafts a terrific addition to your 4K UHD collection with Tammy and the T-Rex in a two-disc set. Pressed onto a BD-66 disc, the discs are housed in a standard black UHD two-disc case. The discs load to identical animated main menus with simple and to the point navigation options. The audio commentary is on both discs with the standard Blu-ray getting the rest of the bonus features as well as the PG-13 cut of the film.

Given age, budget, stature, I honestly didn't think I'd get much with this native 4K fully restored 2160p 1.85:1 transfer with Dolby Vision HDR - but damn - this is impressive! Flipping between the SDR Blu-ray and this disc, it doesn't take long for you to spot the improvements in details, colors, black levels, and contrast. Some dark scenes still have a thick grain presence but there doesn't appear to be any crush issues. The most notable defects appear during some very brief optical effects of full-body Dino-Michael running. But that really is the only bad thing to say about this image transfer.

Details were already impressive on the Blu-ray but there is a lot of extra refinement - especially when you're looking at the great T-Rex puppet. The leathery skin shows a lot of care that went into the paint and coloring of the creature. Costuming - such as it is - also gets a nice punch. I also had a great time reexamining the close-up gore effects - when Hilda rolls up the squished body like a rug is a delightful gag.

With Dolby Vision employed - every aspect of this admittedly low-cost production is heightened to good effect. Colors come to life with bright blues, gloriously crimson reds, and bright bold yellows. Flesh tones look even more natural and healthy. Black levels are spot on giving some deep inky qualities while mitigating some of the more crushed appearances the Blu-ray could exhibit. Whites also appear more crisp and bright without any blooming. Considering all things, Vinegar Syndrome really went for it with this restoration effort and it's a damn fine near-reference quality presentation.

Tammy and the T-Rex rides a pretty aggressive DTS-HD MA 2.0 audio mix. For this flick, I actually had to turn the volume down a couple of notches from my normal setting. Thankfully even as hot as it is, there isn't any distortion or trouble spots. The dialog is clean and clear throughout and even with a stereo mix, sound effects and scoring combine to create a nice sense of atmosphere and dimensionality. As I mentioned levels are bit high but once you get your setup adjusted to something comfortable you don't need to worry about it again. There is some slight hiss in a couple of quieter scenes, but nothing severe enough to complain about. Free of any pops, scratches or other age-related issues this is a damn fine mix.

NOTE: I delayed writing up this review a couple of days because I initially had a tough time with audio on the 4K UHD Blu-ray disc. At several points throughout the film, the audio would fall out of sync or be just enough off that it would give actors a rubber mouth appearance. This didn't happen on the Blu-ray. I'd read elsewhere other people were having the same issue. After double-checking connections and running a firmware update on my player the issue resolved itself. So, if you run this problem, double-check if your rig isn't due for an update.

Tammy rides off into the sunset with an impressive array of bonus features. The commentary track is a great and entertaining listen but the treat is the PG-13 cut of the film in SD - it show how much better this movie is uncut than what was tossed out onto VHS decades ago.

If you love your movies on the campy side with a dash of self-awareness - Tammy and the T-Rex is the sort of cinematic delight you should get a kick out of. Probably more famous for starring youngsters like Paul Walker and Denise Richards, T-Rex is a wild ride with a delightfully gory sense of humor. Probably best with some mixed drinks and a few friends, this is some classy entertainment value from the director of Mac and Me.

Vinegar Syndrome chose one hell of a flick to upgrade to 4K Ultra HD - and they pull off the effort marvelously. Sporting a fresh new 4K scan and restoration, Tammy and the T-Rex lives large with a beautiful transfer bolstered by a sparkling Dolby Vision HDR pass. Kick in an effective and natural DTS-HD MA 2.0 track along with some fantastic bonus features including the neutered PG-13 cut, and cult film fans have something proud to show at their next screening event! Highly Recommended

Sale Price 32.49
List Price 49.98
Buy Now
3rd Party 41.67
In Stock.
See what people are saying about this story or others
See Comments in Forum
Previous Next
Pre-Orders
Tomorrow's latest releases