Woody Harrelson, Jesse Eisenberg, Emma Stone and Abigail Breslin reprise their roles for a ten-year reunion in Zombieland: Double Tap, giving fans some of the same gory fun and making it every bit as good as its predecessor. The sequel sets down roots on Ultra HD with a gorgeous 4K HDR10 presentation, a bitchin', fully-loaded DTS:X soundtrack but the same set of supplements. Still, the UHD package makes for a Recommended addition to the 4K family.

Fans of the undead return for a second helping of gory comedy in Zombieland: Double Tap, and just like going back for another plateful of the same meal, director Ruben Fleischer essentially cooks up the same recipe as before. Only, for this second serving, Fleischer and his talented crew add a few new ingredients with a pinch of fresh spices, offering a dish that is familiar but with a couple of welcomed surprises. In his usual stammering voiceover, Jesse Eisenberg's Columbus says as much at the start, briefly updating us on the strange evolution of the zombies right before jumping into an opening title sequence similar to the first movie. However, a different Metallica song plays in the background while our four protagonists — Columbus, Tallahassee (Woody Harrelson), Wichita (Emma Stone) and Little Rock (Abigail Breslin) — show off their expertise in effectively slaughtering zombies like a family.

Again, much of the same with some minor tweaks and alterations, a few arguably unexpected twists and turns to make this direct follow-up a delightfully twisted joy while still serving the sort of satisfying comfort food we didn't know we needed or wanted in this cynical world. And it's not long before Columbus and Tallahassee are faced with realizing life at the White House can feel almost as stale and stagnant as the dead for Wichita and Little Rock. In the ten years since its predecessor, the zombies have adapted to the new world, the men have given into tedium and banality, but the women grow restless. Stone's resourceful, level-headed Wichita grapples with Columbus' ready to settle for marriage, and Breslin's Little Rock isn't so little anymore, hungering to explore the world and growing weary of Tallahassee's overbearing fatherly affections. The men are content with the same, but the women want new. 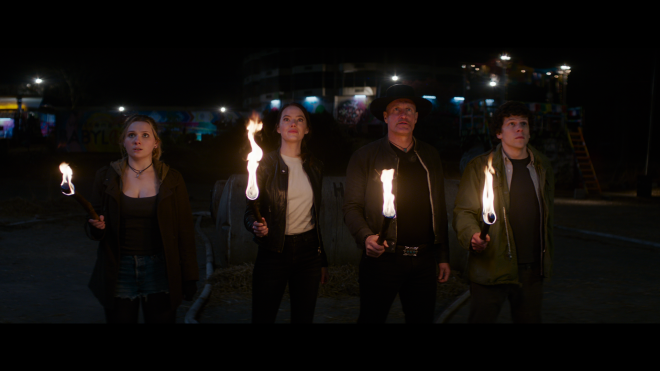 Of course, the best hilariously gory fun in Double Tap comes from the new and drastically different, starting with Columbus' rebound friend Madison (a wonderfully witty Zoey Deutch). Along with Little Rock's teen crush, the pacificist musician Berkeley (Avan Jogia), different only succeeds in aggravating a crotchety Tallahassee, Harrelson's best moments. As with the first movie, the plot dispenses with some intriguing ideas about modernity's current state of affairs, especially with a new strain of zombies that are more aggressive, persistent and literally headstrong in their ways. When faced by their doppelgängers (Luke Wilson and Thomas Middleditch) and a new love interest (Rosario Dawson) for the otherwise hard-hearted Tallahassee, the gang is challenged with confronting a seemingly unchanging yet politically-divisive world populated by a horde of stubborn, single-minded walking dead.

Sony Pictures Home Entertainment brings Zombieland: Double Tap to Ultra HD Blu-ray as a two-disc combo pack with a flyer for a Digital Copy, which can be redeemed via sonypictures.com and Movies Anywhere. When redeeming said code, users have access to the 4K Dolby Vision version with Dolby Atmos audio. The dual-layered UHD66 disc sits comfortably opposite a Region Free, BD50 disc inside a black, eco-elite vortex case with a glossy slipcover. At startup, the disc goes straight to an interactive main menu that changes screens when switching between the usual options while music plays in the background.

Our merry band of zombie killers goes big and finds a home on Ultra HD, armed with notably improved contrast and brightness balance. Right from the start, the HEVC H.265 encode boasts vividly cleaner and more resplendent whites while allowing excellent clarity into the far distance. Some of the clothing looks freshly bleached and washed, exposing the threading in the fabric, and the individual hairs in Madison's fur coat are sharply detailed. Likewise, specular highlights enjoy a welcomed boost, showing a dazzling crisp radiance in the overcast skies, a tight brilliant glow in the various lights and a realistic polish along metallic surfaces.

Arguably, black levels display the most dramatic jump, looking richer and inkier with superb gradational differences of the various shades and in the many articles of clothing. Shadows are silkier and darker than its HD SDR counterpart without obscuring the finest details within the murkiest corners, providing the 2.39:1 image with a gorgeous cinematic quality. The HDR10 presentation, on the other hand, doesn't show as drastic of a change in the colors although primaries comparably appear a bit more full-bodied and better saturated, particularly an excellent selection of blues. Reds are also a darker, more garnet shade to make the blood seemer gooier and chunkier. The warm yellow lights of the White House have a slightly more welcoming marigold glow, and the Elvis-themed hotel bursts with fuller, fiery oranges and cobalt blues while Babylon attracts the dead with animated pinks, purples, greens and cyans.

Shot entirely on the Arri Alexa camera system capable of up to 3.4K resolution but mastered to a 2K digital intermediate, the upscaled 2160p transfer hits the road with a slight uptick in overall definition. It's not a significant night and day difference from its HD peer, but this 4K video nonetheless packs moderately sharper details for most of the runtime, exposing every nook and cranny in various buildings, vehicles and streets. There is a tad better clarity in the surrounding foliage, in the clothing and in the icky, gloopy makeup effects of the zombies. Meanwhile, facial complexions of the living appear healthy and come with lifelike textures, revealing pores, the smallest wrinkle and most trivial blemish. (HDR10 Video Rating: 94/100)

Unlike those peace-loving pacificists of Babylon, the sequel embraces the undead mayhem with a bitchin', full-loaded IMAX-enhanced DTS:X soundtrack, delivering a few noteworthy upgrades over its DTS-HD brethren but still falls short of earning "Zombie Kill of the Year." For a majority of the runtime, havoc and destruction reign supreme through the surrounds, showering the room with a steady gooey stream of gore, like the growling screams of zombies darting from one side to the other. Occasionally, the gushing sprays of blood can be heard splattering overhead, the loud ringing of gunfire reverberates all around the listening area, or bits of debris fall from above. Other minor but very subtle atmospherics randomly float across the ceiling as well, generating some amusingly demo-worthy moments.

Across the fronts, imaging appreciably feels wider and more spacious as a variety of background activity fluidly litters the screen, particularly during the action sequences when ambient effects travel into the top heights for generating a highly-engaging half-dome soundstage. Meanwhile, those aforementioned loud, action-packed moments display an extensive and richly detailed mid-range, layered with superb definition and clarity in the higher frequencies. While in the thick of it, vocals are exceptionally precise and well-prioritized with appreciable inflection in the various performances. The low-end remains the same as its lossless counterpart, but overall, the bass is plenty powerful and potent, providing a hearty punch and weight to the explosions and music, making this UHD edition a winner. (DTS:X Audio Rating: 90/100)

Aside from porting over two extras to the Ultra HD, the entire supplemental package can be enjoyed from the accompanying Blu-ray disc.

Fans of the walking dead return for a second helping of zombie mayhem in Zombieland: Double Tap, giving audiences some of the same splatter, gory comedy as before with a couple welcomed twists and turns along the way. After quickly catching up with our four, city-named heroes, the troupe picks up a few hitchhikers while also confronting a world of changes and a new breed of persistent, stubborn zombies. The sequel sets down roots on Ultra HD with a gorgeous 4K HDR10 presentation and a bitchin', fully-loaded DTS:X soundtrack, offering some notable improvements over its Blu-ray counterpart. Sharing the same set of supplements as its HD peer, the UHD package makes for a recommended addition to the 4K family.

Sale Price 14.48
List Price 30.99
Buy Now
3rd Party 6.91
In Stock.
See what people are saying about this story or others
See Comments in Forum
Previous Next
Pre-Orders
Tomorrow's latest releases