If you're looking for a smart, edgy or challenging political thriller, then you'll have to look elsewhere because Angel Has Fallen is the furthest from thought-provoking or even engagingly stimulating. At its core, the third entry in the Fallen franchise is pure mindless fun, meant for feeding such hunger and guaranteed to satisfy specifically those in the mood for it, which is very much in line with its two predecessors. This is the type of movie driven more by the action — as in every scene and conversation is designed for situating one action set piece after another than by a plot that progresses towards a meaningful climax. In fact, Angel is the standard, generic actioner lazily circling a mystery that pits Secret Service agent Mike Banning (Gerard Butler) as the architect of the President's (Morgan Freeman) assassination attempt. And sadly, the real culprit is easy to determine within a matter of minutes, making the rest of the runtime watching Banning try to clear his name somewhat of a chore.

On the other hand, it would also appear as though the filmmakers are aware of the plot's predictable shortcomings. Either that or they really didn't feel like being bothered putting much effort into creating a more elaborate puzzle. Early into the second act, the script, which took five writers to complete, lays all its cards on the table when revealing Banning's friend Wade Jennings (Danny Huston) as responsible for the assassination attempt. This would be considered a spoiler had the previews not already ruined the surprise. Then again, it wouldn't make much of a difference anyhow since Huston almost immediately appears on screen with an air of suspicion about him, which is both a talent and a hindrance because he does so terrifically well in the role of a smart, scheming baddie no matter the movie. With all this established within the first half-hour, the only mystery left is in uncovering the auto-tuned voice who retained the services of Huston's Jennings and his merry band of mercenaries. 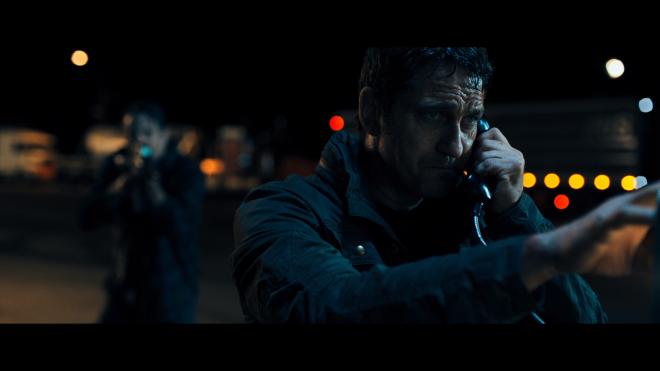 As the head honcho of Salient Global, the front name for the aforementioned private military company, Jennings' potential for uninterrupted revenue — so long as national interests are constantly threatened — is about to be interrupted by new government regulations initiated by President Trumbull (Freeman). It's just another familiar trope in an endless string of familiar tropes — the one where money and greed is the common motive. Only, here, the device dares audiences to read deeper into a plot that barely wafts disapproval of a government's involvement with mercenaries but also makes clear black-and-white distinctions between the U.S. military and privately-owned forces. The plot feigns a finger on the pulse of topical issues without embracing the controversy while proudly wearing its nationalism and gung-ho jingoism on its sleeve. But the story of framing Banning as the traitor ever so subtly implies a Russian collusion is decidedly fake and part of a larger conspiracy.

Of course, this is nothing new for anyone familiar with the franchise, and its success is thanks to filmmakers being able to maintain the politics low-key enough to attract a wide audience while also just relevant enough to be entertaining. And what makes Angel Has Fallen a worthy but equally unique entry in the series is Mike Banning becoming the focal point. The stalwart guardian angel who has thoughtlessly endangered himself to shield the President is now tasked with defending himself. The second sequel is a logical follow-up to previous events where Banning's sacrifices have finally caught up to him and is forced to reconsider his future in the Secret Service. At the same time, the filmmakers expand on the character's mythos with a glimpse into the toll his career has taken on his wife (Piper Perabo) and family while also learning details about his past when his father (Nick Nolte) shows up. Packed with plenty of visual spectacle and heart, the third installment is good mindless fun.

Lionsgate Home Entertainment brings Angel Has Fallen to 4K Ultra HD Blu-ray as a two-disc combo pack with a Digital HD Copy code, which can be redeemed via movieredeem.com or at VUDU.com, unlocking the 4K Dolby Vision version with Dolby Atmos audio. Inside a black, eco-cutout case with a glossy slipcover, a triple-layered UHD100 disc sits comfortably opposite a Region A locked, BD50 disc. At startup, the disc goes straight to an animated menu with full-motion clips, the usual options and music playing in the background.

The fight to prove one's innocence spirals wildly out of control on Ultra HD equipped with an outstanding and surprisingly beautiful HEVC H.265 encode, offering several notable improvements over its Blu-ray peer. Originally captured at 3.4K resolution on the Arri Alexa camera systems and later upscaled to a 4K digital intermediate, the freshly-minted 2160p transfer shows a welcomed uptick in definition within the first few opening shots. The pores, wrinkles and negligible blemishes in the faces of the cast are a bit clearer and more apparent while the stitching and threading in costumes and uniforms are also more distinct with better visible textures in the various fabrics. Aside from a few moments of softness and blatantly deliberate shallow focus photography, the picture is overall sharper with more discrete detailing in the foliage, the city streets and the many buildings throughout.

The 4K video also blasts its way to home theaters enjoying stronger, better contrast balance. Although the heavily-stylized cinematography of Jules O'Loughlin is muted and low-key to give the plot a more somber feel, the action nonetheless enjoys a small, subtle boost, enough to supply cleaner, more brilliant whites in the clothing and various light fixtures. Specular highlights, on the other hand, don't show as much of a jump from the HD version, largely looking about the same. Even though we can note a tad narrower, crisper glow in the clouds and lights, the hottest spots like explosions bloom bad enough to wash away the finer details.

Angels really do fall from the sky on this awesomely fun, occasionally aggressive Dolby Atmos soundtrack, sure to light up home theater rooms as much as the screen.

Right from the start, listeners are bombarded with the sound of helicopters convincingly panning overhead while the rotor and blades discretely reverberate all around, immediately immersing viewers into a satisfying hemispheric soundfield. In some sequences, rain subtly drizzles from above, droves zoom by in every direction, and random ambient noise periodically bleeds through the ceiling and surrounds. Atmospherics employ the sides and rears more often with excellent directionality, and in a couple sequences, voices through the radio come from the rear heights.

At the same time, the object-based mix is continuously busy with lots of background activity and outstanding, flawless movement across all three front channels and into the top heights. Imaging displays distinct, precise midrange with room-penetrating clarity, creating a broad and spacious half-dome soundstage. David Buckley's score enjoys clean separation and warmth in the orchestration, and dialogue remains well-prioritized with great intonation in the gruff, throaty voices of some actors. The low-end could be a tad stronger given the explosive visuals, but it's nonetheless an adequate, punchy midbass, providing some of the action with appreciable presence. (Dolby Atmos Audio Rating: 92/100)

The third entry falls on Ultra HD with the same set of bonuses as its Blu-ray counterpart.

Gerard Butler and Morgan Freeman return as Secret Service agent Mike Banning and President Trumbull in Angel Has Fallen, the third entry in an action series that has remained entertainingly consistent and the same. Only, this second sequel feels more like a genuine continuation that expands on the central hero's mythos, equipped with a familiar political thriller plot that, at least, delivers some good mindless fun. Angels fall on 4K Ultra HD with an outstanding Dolby Vision HDR presentation, offering a notable upgrade over its Blu-ray counterpart, and the same awesomely satisfying Dolby Atmos soundtrack. Porting over the same set of supplements as the BD, the overall UHD package is recommended.

Sale Price 10.43
List Price 22.99
Buy Now
3rd Party 4.35
In Stock.
See what people are saying about this story or others
See Comments in Forum
Previous Next
Pre-Orders
Tomorrow's latest releases