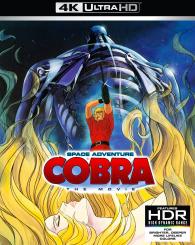 In a universe swarming with inhabited planets and bizarre aliens, corrupt governments operate in the pay of star-spanning criminal syndicates and the Justice Federation of United Galaxies places a price on the heads of hardened criminals. The highest bounty of all rests with the infamous space pirate Cobra, an unstoppable rogue whose left arm conceals a devastating psycho-gun. Presumed dead for two years, Cobra comes out retirement after an encounter with the beautiful bounty hunter Jane - a decision which leads him into direct conflict with the sinister Galaxy Pirates, a vast criminal organization led by Crystal Bowie, the personification of death itself. Available for the first time on ULTRA HD! Includes the original Japanese language with English subtitles, and the English dub.