Nothing quite like a journey of self-discovery as a gaggle of young teens set out to take a Yetti back to his family in Abominable. While the story guts and mechanics are very familiar, the execution is stellar giving a lot of heart to a tried formula - and being a lot of fun at the same time! Abominable arrives on 4K UHD Blu-ray from Universal Pictures with an often beautiful HDR10 presentation and a lively and active Dolby Atmos mix with some decent bonus features. The film may not reinvent the wheel, but it's a great one for every kid in the room. Highly Recommended.

We also reviewed the Blu-ray HERE

Yi (Chle Bennet) has just lost her father. Together they'd planned a trip together - a trip she's determined to make happen by taking odd jobs and subsequently alienating her mother (Michelle Wong) and grandmother (Tsai Chin). One night while practicing her violin on the roof, she discovers an incredible creature - a Yeti! Realizing a bunch of sketchy government agents are after the wounded animal, Yi with her friends Peng (Ablert Tsai), and Jin (Tenzing Norgay Trainor) set out to take their new friend home to Mt. Everest. With the evil Burnish (Eddie Izzard) and the empathetic Dr. Zara (Sarah Paulson) on their trail - it won't be an easy journey. 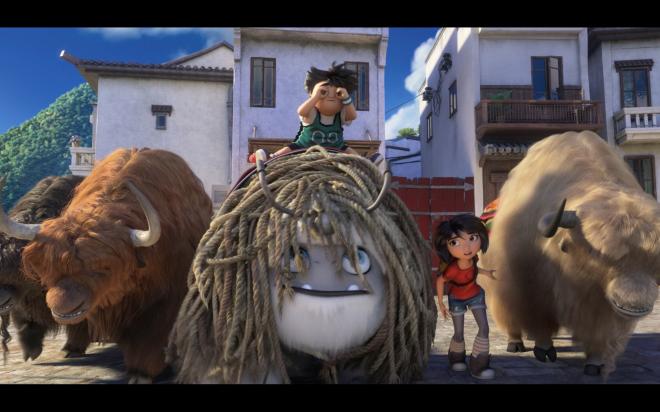 E.T.: The Extra-Terrestrial, Harry and the Hendersons, Free Willy… see a pattern here? As with Abominable, these films feature a gaggle of willful well-meaning youngsters thwarting some sort of authority group or threat as they befriend an extraordinary creature and then endeavor to take said critter back to its proper home - no matter how much a part of the "family" it has become. Abominable follows this formula to the letter. Normally I'd knock some strikes against this family-friendly flick for basically recycling a tried plot, but I can't in this case. Abominable may not be doing a lot new, but what it's doing it does really well. From the first big escape sequence where our titular creature makes a break for it to Yi's discovery of the animal to their wild journey to Mt. Everest - this film hits every plot beat right on the money.

But that's not a bad thing either. Similar to any number of misplaced magical creatures, Everest as our lovable yeti is called has a unique ability to communicate with nature - and influence it at the same time. Creating a gigantic dandelion as a method of escape is more than a little far fetched, but in the play of this particular story, it's perfectly natural. These moments play to the emotional strengths of the characters and the over-arching theme about family and friends.

On top of some thoughtful story choices from writer/director Jill Culton, the film looks fantastic. the character animations are clean and Everest is a delightful creature. The way the big guy lumbers about with his large body and head with a flat face, there's just something inherently cute and cuddly to this mythical monster. But Everest isn't the only critter throughout the film. As the story chips away at the ideas of leaving the natural world well enough alone, we get to see any number of creatively executed critters. A group of tortoises was a favorite moment.

In truth, I didn't expect much from Abominable going into the show. I sat down expecting something that would just barely cover the basics, but this flick pushed past that very quickly. While it does make any depiction of adults as either dopy or diabolical to give our plucky teenagers the edge, the film manages to pull together a heartfelt story that has plenty of action and humor to entertain everyone in the room. Color me pleasantly surprised by this one.

Universal Pictures delivers Abominable to 4K UHD Blu-ray in a two-disc 4K UHD + Blu-ray + Digital set. The discs are housed in a standard sturdy black 4K UHD case with identical slipcover artwork. The disc loads to trailers for upcoming Universal releases before arriving at an animated main menu with traditional navigation options. All bonus features are available on the 4K disc as well as the SDR Blu-ray. 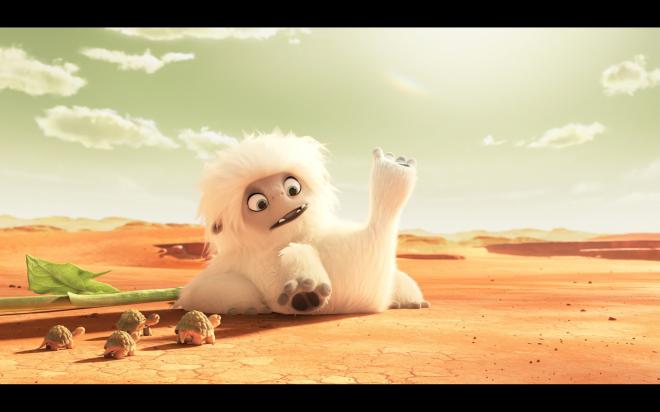 Popping onto the screen with a 1.85: 1 2160p HDR10 presentation, Abominable is a damned beautiful looking show! I wasn't able to locate whether or not this was sourced from a native 4K digital intermediate of it was upsampled from a 2K DI. Flipping between this disc and the included SDR 1080p Blu-ray and only noting slight improvements in details, my wager is that this film was finished on a 2K Digital Intermediate - which isn't a bad thing at all. While the improvements in overall fine details are modest, where it counts you can tell. The differences in fine lines - especially Everest's hair or when they cover him in ropes so he passes for a yak (a particularly humorous moment) offers up some nice improvements in details.

Where this HDR10 presentation comes to life is with the vivid and often stunning improvements in natural color saturation, whites, and deep inky blacks. Primaries, reds, blues, and yellows get plenty of room to pop throughout the film and offer a much richer presence than the 1080p SDR presentation. The film opens with a night-time breakout sequence with Everest escaping the holding facility and hiding deep in the city. Throughout the sequence, there is a terrific sense of light and dark and the gradience in between the colors. As there are numerous neon lights and electronic advertising boards the lighting effects and how they cast on Everest's white fur make for some pretty imagery. Black levels offer some truly inky blacks while allowing for plenty of shadow separation and image depth. 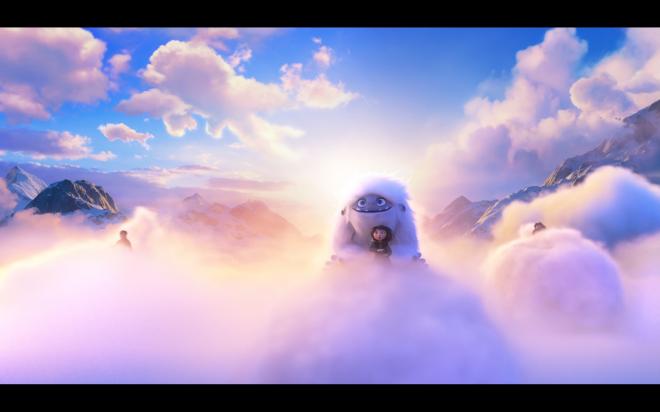 You gotta love an Atmos mix that knows how to have fun with itself. Abominable makes excellent usage of the format giving viewers an active and engaging surround experience while making plenty of use of the overhead facing channels and the added space and dimension. The film starts strong, there isn't much lead time here as Everest makes his escape. Sounds of guards yelling, sirens blaring, helicopters pursuing overhead while street-level traffic and car horns add to the cacophony. Not only is it a visually impressive way to start the movie but he active sound design pulls you into the action right away.

While the action beats are a highlight, the film knows how to make great use of quieter scenes without sacrificing sonic impact. Even in the quietest moments when Yi, Everest, and Peng are resting under the stars, there's plenty of natural-sounding outdoor woodland effects to soak in. As the shady government agency, people close in on them the sound of their vehicles adds to the distinct vertical placement while Everest's singing and the rumbles of engines and helicopter rotors give the mix a lively LFE presence. Levels are spot-on for this Atmos mix if anything I had to turn the mix down a notch or two below my normal listening levels! 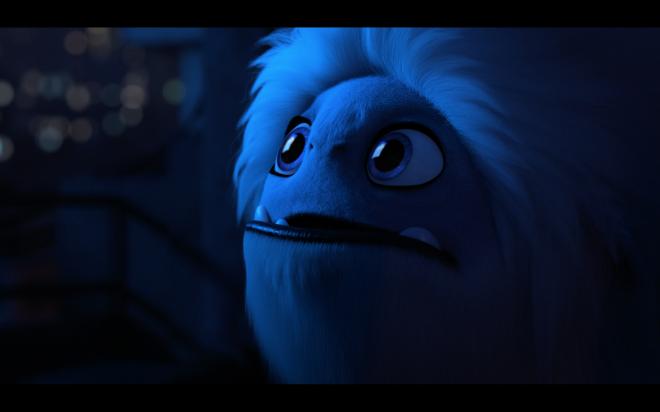 Abominable actually comes through with some pretty great bonus features. While most of these are geared towards the kiddos in the room, there's actually some great stuff for the adults as well. The audio commentary is pretty great because of the packed crew they have in the room who all offer impressive info about the animation, staging, achieving the lighting. Personally I had a great time with the How to Draw bit, but that might not be for everyone. 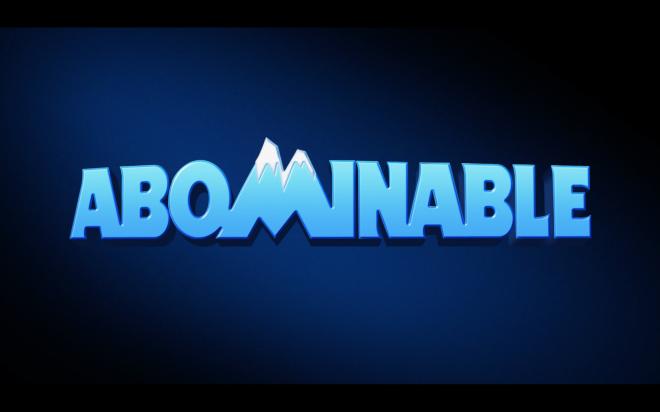 Abominable was an unexpected delight. I honestly thought it was going to be something run of the mill and not all that original. While the basic plot structure isn't the most original, the execution is what makes it fun, fresh, and unique. The animation is detailed and lively, the audio mix is lively, the voice cast is excellent, and as a whole, the film was just damned entertaining. After a long work week, this was a fun surprise that put a smile on my face.

Universal Pictures delivers Abominable to 4K UHD Blu-ray in a splendid two-disc set. The image comes to vivid life with an excellent 2160p HDR10 presentation that offers clean lines with bright bold colors and deep inky blacks. On top of that, the Atmos mix is aggressive and lively and punches up the action and wonder of the show. Abominable was a lot of fun and I imagine most folks about there - big and little - will have a great time with it. Highly Recommended.

Sale Price 18.76
List Price 29.98
Buy Now
3rd Party 9.97
In Stock.
See what people are saying about this story or others
See Comments in Forum
Previous Next
Pre-Orders
Tomorrow's latest releases