In the Shadow of the Moon brings in multiple genres that follow a police detective searching for a hooded killer who never seems to age throughout four decades. With time-travel and an apocalyptic scenario, this Netflix film has big motivations but falls flat in more than one area. The Dolby Vision stream looks quite good while the Dolby Atmos track sounds immersive at times, but rarely uses overhead sound placement to fully engage. Worth A Look! 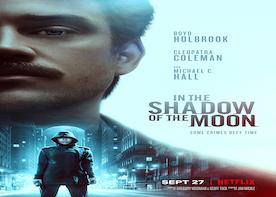 As a famous doctor once said, "We've gotta go back to the future." Of course, this famous line is about time travel, which is what In the Shadow of the Moon hides under its life preserver in this cop noir-thriller for Netflix. Director Jim Mickle (We Are What We Are), combines a few genres that create a great backstory with sci-fi elements but has a few hiccups in its execution and reasoning.

The first scene starts in 2024 with a city block destroyed under fire and an unknown flag falling down. It's pure pandemonium outside. The scene quickly flashes back to 1988, where we see a hooded figure inject something into a series of random people. Quickly, these poor victims die a horrible death of bleeding out of every orifice - brains and all. Police officer Thomas Lockhart (Boyd Holbrook) is first at the scene with his stern, but caring brother-in-law detective (Michael C. Hall), traveling right behind.

They discover that all of the victims have a distinct puncture wound as they pursue this hooded person, who turns out to be a young woman (Cleopatra Coleman). Face-to-face on a subway platform, Lockhart tries to arrest this young woman, but he is outmatched by her fighting skills. She then throws a wrinkle in his shirt by telling him future secrets only he would know, like the birth of his new baby and they will see each other soon. Suddenly, this woman is killed by the subway car.

Cut to the 1990s, where Lockhart has moved up in the detective world, but still can't seem to shake that uncanny night. The hooded woman shows up again and starts to attack her victims. Rinse and repeat for a couple of decades as Lockhart and his brother-in-law grow older, trying to figure out this puzzle. It's not until a scientist tells them of the possibility of time travel, the murders, and the lunar cycle might all have a connection.

This is where the screenplay, written by Gregory Weidman and Geoffrey Tock, throws everything it's got into the final act as the decades move by. While everyone is growing older and headed down very different paths, this one young woman stays the same age and has more tidbits of wisdom and secrets to bestow. By the time the big reveal happens, you've already figured it out, along with more complicated tangents that never seem to forward the story. Additionally, the time travel aspect and dialogue tends to implode on itself, where none of it makes sense. Again, it's a great setup and story with some solid performances, but the execution and delivery missed its time jump and got stuck in limbo.

Holbrook plays the role of a man going down a dark path, losing all hope well. His body language and eyes sell his pain wonderfully. Hall has a smaller role but is none-the-less perfect in it as the abrasive, but tender brother-in-law. He also has the best lines in the film. The true spotlight is on Cleopatra though as she brings her mysterious character to life with some authentic emotion and physical prowess. I just wish the stories and science aligned perfectly as they stated throughout In The Shadow of the Moon.

Netflix introduces the new film In The Shadow of the Moon with Dolby Vision / HDR10 and a Dolby Atmos track with compatible displays and audio systems. 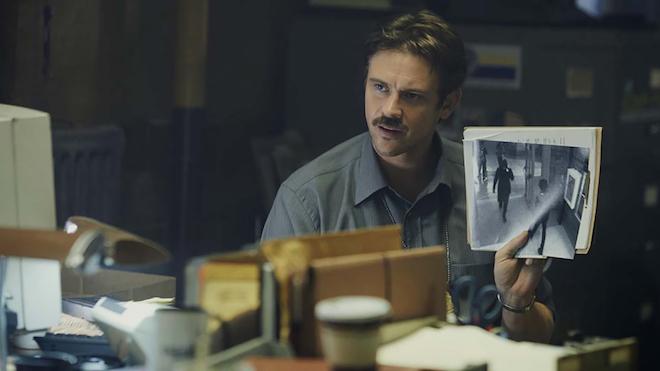 Netflix travels through time with In The Shadow of the Moon, packing a Dolby Vision / HDR10 transfer that has a stylized look to it. Colors are muted throughout to give a sense of dread and the detail is lively and rich in each scene.

Like it's tone, the color palette is dark and subdued with lower-lit interiors, along with greenish and blue filters that never truly brighten any scene. Even out in the sun, the characters and exterior are unilluminated, which mutes primary colors in the wardrobe and props. Sequences in a police station or diner showcase darker brown woods, rather than a lighter motif. The more radiant moments happen in the subway station with bright white tile and surprisingly in a dark cave where some excellent looking light blue lights outline a time-travel device. Also of note are the red and blue police car lights that contrast perfectly with the night-time streets of Philadelphia. These colors are bold and pop right off the screen in an otherwise dim setting. Black levels are inky and rich, with no evidence of crush and skin tones are natural, if not a little shadowy due to all of the lower light levels.

With a darker setting, the detail is still intact with gorgeous textures and facial features. Closeups reveal the exceptional makeup effects as the actors grow older, showing wrinkles, age spots, and individual hairs. As Lockhart grows older, you'll be able to distinguish each separate scraggly hair on his gigantic beard. Police uniforms reveal the necessary stitching in patches and commendations as the guns and vehicles propel the shine and metal look. Buildings in the background are also packed with detail in the grimy city bricks that line the streets. It's a comprehensive picture for sure.

This Dolby Vision / HDR10 is beautiful at times, and free of any encoding issues, even with such a dusky style. 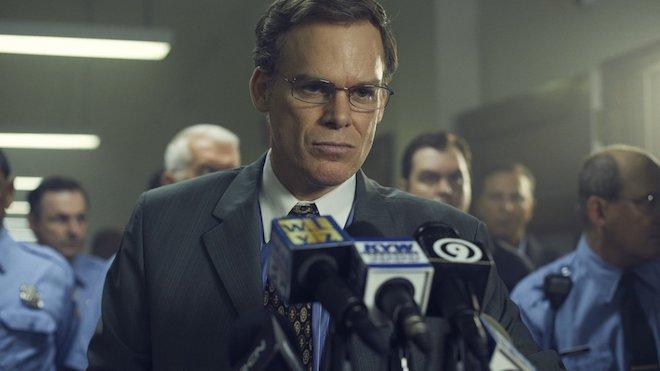 In the Shadow of the Moon boasts a Dolby Atmos track that features some phenomenal atmospherics, robust sound effects, loud musical cues, and a clean Philadelphia dialect.

Sound effects, including gunshots, a time travel device, and police sirens are strong. Each of these audio effects is well balanced and transition from speaker to speaker nicely. Chase scenes provide the most immersive effects with vehicle noises, car radios, gun blasts, and dialogue all mixing evenly with one another. It's quite an immersive and chaotic sound field when the action hits full force. Ambient noises are powerful too, especially in the subway scene, where you can hear multiple conversations and the subway car noises, which are intense. Height speakers are rarely engaged, but two scenes stuck out in particular. There is a private plane crash where a storm and debris rain down from above and a club scene where you can hear music and people yelling on balconies, which delivered smooth noises from the sky. Dialogue is cleanly rendered with some decent directionality too.

The Dolby Atmos track here only kicks into top gear in the action sequences, where the rest of the mix is front and center and that's fine because most of the film plays out like a police noir. Still, this audio recording makes it count during the high-octane segments with a good amount of bass, providing a satisfying low-end with no sound issues to speak of. 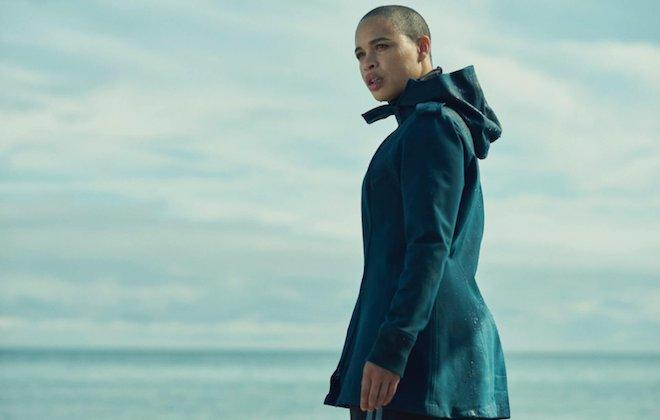 Only a trailer is available at the moment.

In the Shadow of the Moon is ambitious, creating a big world over the span of a few decades full of time-travel, thrills, and noir. With good performances and a great setup, the film makes use of these genre tropes, but never fully executes its characters or lore to a coherent narrative. For those with the more expensive Netflix plan, the Dolby Vision / HDR10 visuals are sharp and contrast, but muted, while the Dolby Atmos mix offers a few high octane moments. Worth A Look!