A genuine marvel of digital filmmaking, director Jon Favreau's The Lion King mesmerizes with the stunning photorealism in the CG animation, but it also boringly duplicates the original Disney classic without offering much new. The young lion prince finds his roar on Ultra HD with a beautiful, demo-worthy 4K presentation, an outstanding Dolby Atmos soundtrack but a small assortment of supplements. Nevertheless, the overall UHD package is Recommended.

Within a matter of a few minutes, it becomes abundantly clear The Lion King remake from director Jon Favreau (The Jungle Book, Iron Man) is ultimately nothing more than a literal repeat of Walt Disney's 1994 original animated classic. In fact, given that almost every scene, from the camera angles and shots to the dialogue, is practically identical to its predecessor, we'd be hard-pressed to accurately call this a remake. Granted, there are a couple new sequences sprinkled here and there — the most apparent being the elephant graveyard sequence with the hyenas. But since some of those moments are actually inspired by the Broadway musical, Favreau's movie can be best described as a facsimile, a duplicate or a carbon copy. Heck, even the phrase "live-action adaptation" doesn't really apply either seeing as how the movie is all CG-animated characters mixed into live footage of African backdrops.

Essentially, the studio, Favreau and his team have invented a new subgenre for Disney's latest craze of live-action remakes: the photorealistic replica. (Take a gander at the Lady and the Tramp (2019) preview for Disney+ as further evidence of this.) And with that being said, the next issue that immediately comes to mind is questioning or deliberating on the purpose of these productions. What is the point of remaking a literal copy of the original if the filmmakers introduce nothing new to the story? The most obvious and instant response is certainly profit, and The Lion King decidedly accomplished that goal, becoming a global box-office phenomenon. And perhaps even more amazingly, it does this while never straying far from Simba's (Donald Glover) journey of self-discovery and self-actualization, a harrowing tale that borrows heavily from Biblical stories, Greek tragedies and Shakespeare's Hamlet. 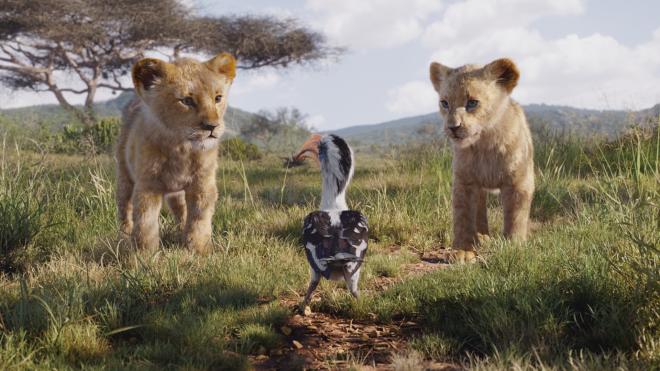 Other than sitting in front of the screen wondering why we're not simply watching the original film, we're continuously distracted by the incredible level of realism in the CG animation, which is undoubtedly stunning and often jaw-dropping to behold. The individual hairs of every creature move freely and independently of one another, and the minute wrinkles and scars of the hyenas and Pumbaa (Seth Rogen) are strikingly distinct. However, the appreciation for the astonishingly lifelike creation of each animal is so mesmerizing, we're much more sidetracked by the amount of work and time that went into their design than the plot, meditating on how far technology has come in the twenty-five years since the original. And sadly, the admirable efforts of a highly talented team of artists are so convincingly good, they may have forgotten to also included some semblance of emotion in the faces of the animals.

Many iconic moments and conversations in Favreau's The Lion King lose their impact and gravity when the animals themselves fail to show any weight behind their words. In fact, it's rather eerie and uncanny to see the same facial expression in Simba when witnessing Mufasa's death as when he reunites with an older Nala (Beyoncé Knowles-Carter). Or it's the exact same expression in Mufasa (James Earl Jones) confronting his brother Scar (Chiwetel Ejiofor) as when he teaches Simba a life-lesson on fear. With our attention incessantly drawn to these other aspects of the production, the story soon becomes more of a chore to watch than enjoy, and frankly, the voice talents of Beyoncé, Rogen and even Jones only succeed at amplifying our distraction. With so much talent behind this remake, it's unfortunate the end result is a disappointment, leaving us to wonder why Disney even bothered. Purely made as a marvel of digital filmmaking doesn't make for good filmmaking.

Walt Disney Studios Home Entertainment brings Jon Favreau's The Lion King to 4K Ultra HD Blu-ray as a two-disc combo pack with a flyer for a Disney Digital Copy. When redeeming said code via RedeemDigitalMovie.com or MoviesAnywhere, users have access to the 4K digital version in Dolby Vision HDR with Dolby Atmos audio. The dual-layered UHD66 disc sits comfortably opposite a Region Free, BD50 disc inside a black, eco-vortex case with a glossy, lightly-embossed slipcover. At startup, viewers are taken to a static screen where owners can choose between the start of the movie or look through the menu. 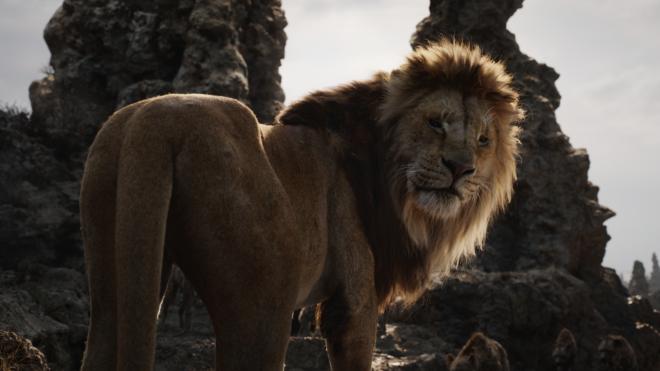 The future king fights for the Ultra HD kingdom with a spectacularly gorgeous  HEVC H.265 encode by his side, showcasing several demo-worthy moments that make this an awesome upgrade over its Blu-ray brethren.

Although the African locations were shot on the Arri Alexa 65 and IMAX cameras, the elements were later mastered to a 2K digital intermediate, likely due to the CG animation. Nevertheless, the upscaled transfer boasts a notable uptick in overall definition, such as slightly sharper hairs in the various animals and better clarity of the minute features in the amazingly realistic panoramic views of the Pride Lands. Speaking of which, many sequences with the animals interacting with their environment are freakishly photorealistic. Each leaf and blade of grass is detailed, and every crevice, fissure and pockmark in the rock formations are extraordinarily distinct. The tiny furrows, creases and wrinkles of Pumbaa are striking, as are the unique textural features in Zazu's feathers. Resolution dips ever so slightly in some spots, but all in all, the 2160p picture is a remarkable step-up over the HD version.

At first, contrast doesn't appear to show a significant jump, but viewers can still appreciate the small boost, supplying the many African landscapes with a bit more radiance and that much longed for "looking-out-the-window" effect. Scene after scene displays resplendent, right-on-the-money whites that occasionally shine with scorching intensity, such as the sequence when Timon and Pumbaa first meet Simba. Specular highlights are notably crisper with a tighter, narrower glow in the hottest areas, such as the aforementioned scene, allowing for better visibility of the finer details in each animal.

Likewise, black levels are remarkably richer and inkier with impressive gradational differences in the various shades, from Pumbaa's dark charcoal skin and in Zazu's obsidian feathers to Scar's ashen-colored scar and in the dismally cloudy days of the Pride Lands. Speaking of which, those same moments are bathed in gloomy, pitch-black shadows without sacrificing delineation, providing the 1.78:1 image with an often-stunning three-dimensional quality.

On Blu-ray, Caleb Deschanel's photography is incredibly colorful, but in this HDR10 presentation, the earthy-brown palette enjoys a welcomed upgrade, showing a bit more variety and range in the golden yellows. The nuanced difference in the tan colors of each lion, particularly for telling Sarabi and Nala apart, is remarkable while the rest of the palette continuously glows from a vivid selection of secondary hues, bathing the evening skies in a gorgeous blend of soft pinks, violet and deep indigo blues. The orange-teal cinematography also comes with fuller, crimson reds and deeper cobalt blues while greens are more dynamic and diverse for bringing the surrounding foliage to life.  (HDR10 Video Rating: 96/100) 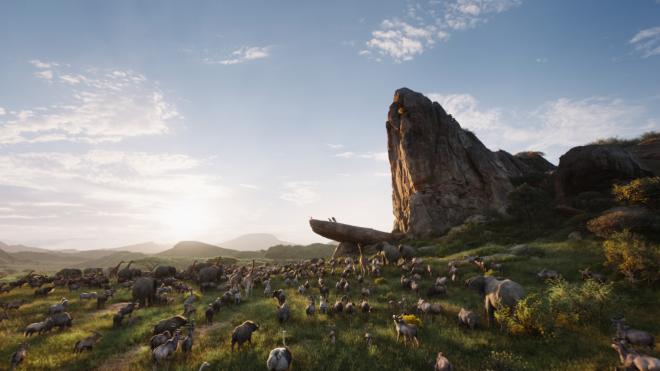 The young lion prince finds his roar on Ultra HD thanks to an outstanding Dolby Atmos soundtrack that surpasses its DTS-HD MA counterpart, offering several welcomed enhancements that make this a winner.

For one, listeners don't have to raise the volume, unlike its lossless brethren, in order to appreciate the mid-range, which shows excellent definition and dynamic separation during the loudest segments. Imaging exhibits slightly better warmth and distinction in the score and songs, delivering some room-penetrating clarity. It still doesn't reach far into the upper frequencies, but the small improvement is nonetheless appreciable with noteworthy detailing during the biggest action sequences while maintaining superb precision and clear intonation in the dialogue and conversations.

Likewise, the low-end also feels stronger and more robust than its predecessor, which is rather surprising. A couple minor moments still feel somewhat lacking given what the visuals would imply, such as the scene with the elephants stomping to Pride Rock. Nevertheless, the rest of the movie benefits tremendously from a weighter, slightly more authoritative bass, providing the thunderstorms and the lions' roars with palpable presence.

Equally surprising, the object-based track also delivers a more effective and enveloping soundscape with a variety of background noises smoothly bouncing across all three front-channels and into the top heights, creating a highly-engaging and spacious half-dome soundstage. Atmospherics extend into the sides and rears for a more convincing presence and exceptional directionality. Occasionally, the effects flawlessly pan overhead, particularly those scenes with the aforementioned ominous weather and thunder, when the young cubs wander into the elephant graveyard or some of the local wildlife in the distance. It's not always consistent, but it is definitely a marked improvement for generating a satisfying hemispheric soundscape. (Doly Atmos Audio Rating: 88/100) 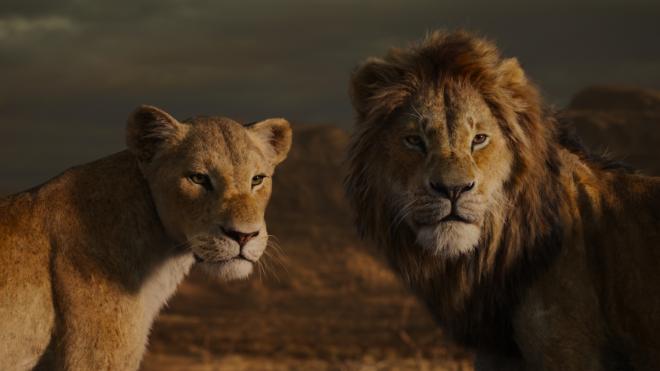 For this Ultra HD edition of The Lion King, Disney Home Entertainment ports over the same set of bonus material as the day-and-date Blu-ray release. 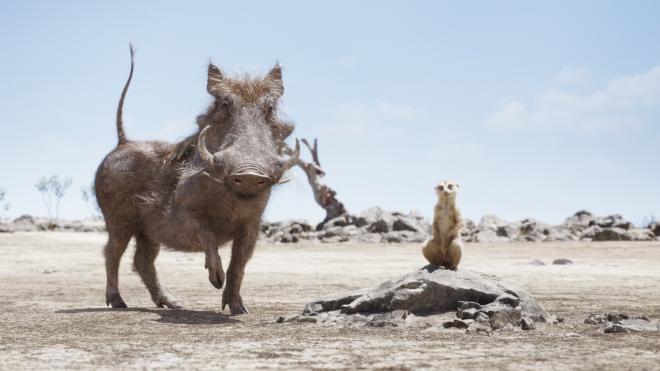 On the one hand, director Jon Favreau's The Lion King is a genuine marvel of digital filmmaking, sure to mesmerize audiences with the stunning realism of the CG-animated creatures on screen. However, on the other hand, pushing the boundaries of technology as a reason for remaking a traditional-animated Disney classic makes for an empty and rather disappointing effort as it simply duplicates the original without offering much new to the plot. Nevertheless, the young future king of the Pride Lands finds his roar on Ultra HD with a spectacularly gorgeous 4K HDR10 presentation and an outstanding Dolby Atmos soundtrack, providing owners with a notable improvement over its Blu-ray counterpart. With a small but still decently good assortment of supplements, the overall UHD package is recommended.

Sale Price 8.99
List Price 26.5
Buy Now
3rd Party 7.98
In Stock.
See what people are saying about this story or others
See Comments in Forum
Previous Next
Pre-Orders
Tomorrow's latest releases