Although nothing particularly special about Walter Hill's buddy-cop Red Heat, the story is an entertaining enough mix of the conventional formula with topical issues, featuring an amusing performance by Arnold Schwarzenegger. The cult action favorite lands on Ultra HD packing a generally good-looking 4K Dolby Vision presentation, a strong DTS-HD MA soundtrack but the same bonus material as before. Still, the overall UHD package is Worth a Look for fans.

Arnold Schwarzenegger was at the height of his A-list career when he was in talks to star in Walter Hill's cult action favorite Red Heat. At the time, the action-blockbuster superstar was also looking to expand his brand, to avoid being typecast and dip his feet into other genres, specifically comedies. Up to that point, mainstream audiences had only seen glimpses of Schwarzenegger's comedic talents from many of his tongue-in-cheek one-liners, especially in Commando and The Running Man. To star in Hill's latest project offered the Austrian actor the opportunity to flex his comedic muscles by playing the straitlaced, uptight and wooden Moscow Militia detective Ivan Danko, a deadpan performance that was amusing but not quite as hilariously memorable as his role in Twins, which released later that same year.

At first glance, comparing Hill's R-rated actioner to Ivan Reitman's beloved family comedy seems like an unfair comparison. On the other hand, contrasting the two actually yields insight into why one worked and the other did not, and frankly, the key is Schwarzenegger's costars. This not to suggest Jim Belushi is a bad actor or that Danny DeVito is better. Instead, Belushi is not particularly funny or all that interesting as the loudmouthed, brash and unconventional Chicago detective assigned to help Danko in capturing a Georgian drug kingpin (Ed O'Ross). Meant to be eccentric and unorthodox in his tactics, Belushi's gumshoe spends more time yelling what should be funny lines, clownishly reacting to Danko's devil-may-care methods and basically being schooled by Danko's ironically effective detective work. 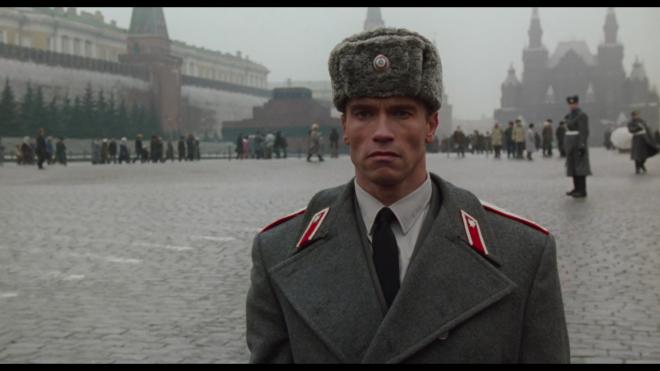 Speaking of a better super sleuth, a noteworthy positive in Red Heat is its script, which Hill co-wrote with Harry Kleiner (Bullitt) and Troy Kennedy-Martin (The Italian Job). The plot blatantly adheres to the familiar buddy-cop formula popularized by Hill's 48 Hrs. and was very popular at the time, leaving very little room for surprises while also making for a predictable movie. Be that as it may, Hill applies the conventional blueprint to the police procedural where we see our odd-couple protagonists actually follow the clues, question suspects and known associates, and find themselves entangled in a complex situation that involves Soviet Russia at a time when international tensions were very high. And in this, the movie makes for an easy watch worth checking out as one of many Schwarzenegger favorites.

Lionsgate Home Entertainment brings Walter Hill's Red Heat to 4K Ultra HD Blu-ray as a two-disc combo pack with a flyer for a Digital Copy. The code can be redeemed via moviesredeem.com or through VUDU, but only the 1080p HD version with legacy Dolby Digital Plus 5.1 audio is available. The triple-layered UHD100 disc sits comfortably opposite the same Region A locked, BD50 disc and housed inside a black, eco-cutout case. At startup, the disc goes straight to the usual menu screen with full-motion clips and music playing in the background. 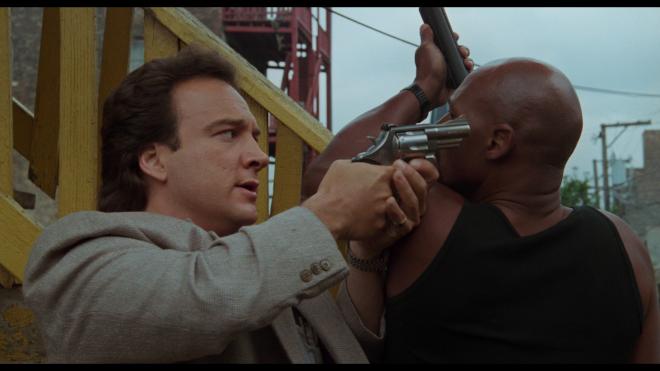 The cult buddy-cop action favorite walks past airport security packing an overall good-looking HEVC H.265 encode. However, despite reportedly coming from a fresh 4K remaster of the original 35mm camera negatives by StudioCanal, the new transfer still manages to set off enough alarms and cast suspicions to keep it on this side of completing its successful mission.

To be sure, this Ultra HD edition delivers a marked upgrade over the 2009 Blu-ray, offering significantly sharper definition and clarity throughout. We can better make out the finer stitching in Danko's militia uniform, the small architectural features of the buildings and city streets, and clearly see the negligible blemishes and pores in the facial complexions. Unfortunately, the 2160p picture comes with a few ugly instances of faint chroma noise and very mild, near-negligible macroblocking in the background, but thankfully, these artifacts are not egregious enough to completely ruin or distract from the encode's best aspects.

Besides, the fresh facelift offers more positives than negatives, like the small boost in contrast, making for a slightly brighter 4K video with cleaner, snappier whites in the clothing, snow and various light fixtures. On the other hand, specular highlights only enjoy a slight improvement and fall just above average, allowing for a bit more visibility within the brightest spots while the glow from lights on faces and wet surfaces appear tighter. On the other end of the spectrum, black levels remain about the same but true with strong dark shadows that maintain good clarity in the darkest corners. Bathed in a thin layer of natural grain, the 1.85:1 image has an attractive cinematic, film-like quality.

On an interesting note when comparing it to its HD SDR counterpart, this Dolby Vision presentation appears to be the result of a new color timing, which could be argued as more faithful to Matthew F. Leonetti's original photography. In either case, the orange-teal gamut is more prominent with fuller greens and cyans in nearly every scene while blues are more dynamic and vivid, and the reds in blood, clothing and lights range from animated rose to deep cherry crimson shades. The improvement in secondary hues, however, is more subtle and not by much. The marigold orange glow of indoor lights is warmer and yellows have a fiery, golden tone in explosions and some gunfire, but the jump is ultimately rather mild and light. Nevertheless, the end result is enough of an upgrade to make some fans happy. (Dolby Vision Video Rating: 76/100) 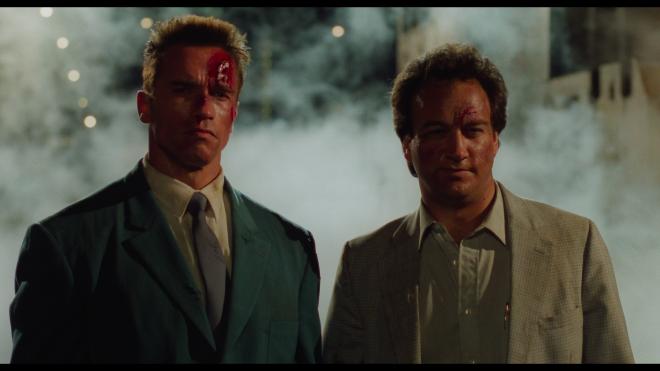 Moscow cops land to home theaters with the same DTS-HD Master Audio 5.1 soundtrack as its predecessor, but that's not entirely a bad thing since the 80s crime actioner was never known for its audio quality.

In fact, the original 4-channel Dolby Stereo design is a very front-heavy, near-mono presentation with practically no activity in the surrounds and all the attention on the on-screen action. To be fair, movement across the front channels is satisfying and effective for a movie of this caliber and vintage, and even when applying the receivers' Dolby Surround or DTS: Neural:X up-mixing functionality, atmospherics seldom lightly bleed into the top heights or sides. Admittedly, this broadens the soundstage ever so slightly in some of the bigger action set pieces, but it's still nothing memorable or noteworthy. Meanwhile, those same sequences come with a rather meager sense of presence, as the mid-range largely feels restrained and uniform despite exhibiting strong distinction in the louder moments. The same can sadly be said of the lower frequencies, providing adequate bass to gunfire and the climactic bus chase but with very little impact or weight. Dialogue reproduction is also good and intelligible for the most part, but occasionally, vocals can lightly be drowned out by some of the action.

In the end, it's not a disappointing high-rez track, and like the movie's two heroes, this lossless mix ultimately gets the job done. (Audio Rating: 72/100) 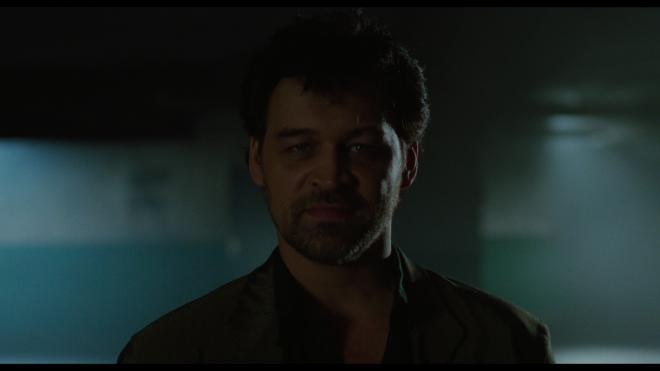 A pair of new supplements exclusive to this Ultra HD edition is joined by the same collection featured in the 2009 Blu-ray, and they can all be enjoyed on the UHD disc. 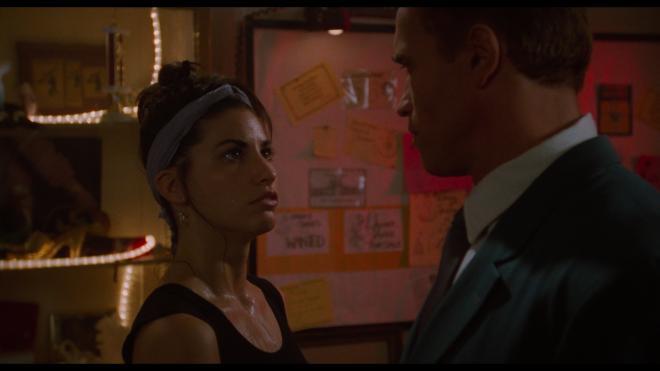 In truth, there is nothing particularly special or unique about Walter Hill's Red Heat, as it is the fairly standard, predictable buddy-cop formula. Nevertheless, Hill injects the conventional with topical international intrigue and the police procedural while also allowing Arnold Schwarzenegger the opportunity to flex his comedic muscles opposite Jim Belushi. The cult action favorite stirs some chaos on Ultra HD packing a generally good-looking 4K Dolby Vision presentation that delivers a notable improvement over its Blu-ray counterpart and the same, strong DTS-HD MA soundtrack as before. All in all, the overall UHD package is worth a look for fans looking to upgrade their previous HD version.

Sale Price 15.3
List Price 22.99
Buy Now
3rd Party 15.3
In Stock.
See what people are saying about this story or others
See Comments in Forum
Previous Next
Pre-Orders
Tomorrow's latest releases