Dwayne Johnson and Jason Statham reprise their roles as titular characters in Fast & Furious Presents: Hobbs & Shaw with spectacularly fun escapism, fueled by the franchise's central theme of family while revving a familiar odd-couple buddy-cop formula. The spinoff sequel erupts on 4K Ultra HD with a strappingly muscular Dolby Vision HDR video, a high-octane Dolby Atmos track but the same set of supplements as the Blu-ray. Still, the overall UHD package jumps over and runs circles around its BD counterpart, making it a Highly Recommended addition to the library.

Over the years, the Fast & Furious franchise has metamorphosed from movies about street racing and the modified-car culture to heist and espionage blockbusters that just happen to feature modified cars. And with each installment that keeps growing more melodramatic, the action has also evolved into comically zany and cartoonishly preposterous, from massive bank safes rampaging streets and battling high-tech tanks to parachuting out of cargo planes and running from submarines. The latest entry, the surprisingly fun and wildly entertaining Hobbs & Shaw, is evidence this wise-cracking, high-octane universe is ready to go off-road, fueled by ultra-masculine virility and driving down a familiar, well-traveled but nostalgic highway. But before dismissing the turbocharged spin-off as some flashy, cash-grab ricer, this fine-tuned sleeper launches from the start and fires on all cylinders to an explosive finish.

To be sure, the engine rumbling beneath the hood of Chris Morgan and Drew Pearce's script could have benefitted from a few more tweaks here and there. But overall, the side-project delivers on its promises with some clever, witty smarts and surprisingly astute humor, making the rest of the silly spectacle that more satisfying. One moment, in particular, perfectly captures this sentiment when Dwayne Johnson's DSS agent Luke Hobbs flexes his ginormous biceps while quoting Nietzche in response to MI6 agent Hattie Shaw's (Vanessa Kirby) accusation of being more brawn than brains. Earlier, Ryan Reynolds made an unexpected cameo as CIA agent Locke and hilariously banters Johnson. The breakfast scene could be a shrewdly subtle jab at political philosophers John Locke and Thomas Hobbes. And even if it's purely coincidental, it nonetheless adds another comical layer to the exchange. 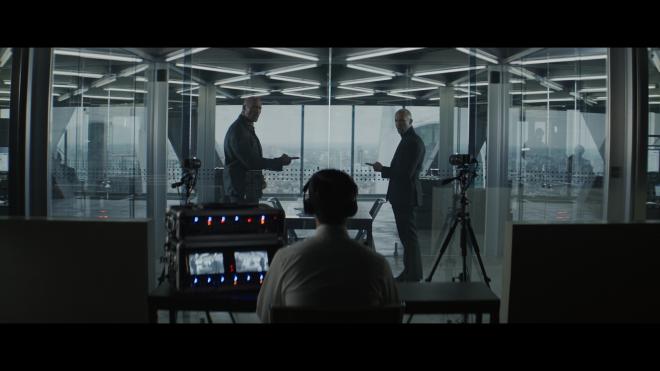 As wonderfully delightful as it is to see their rapid back and forth, however — Johnson and Reynolds need a movie together, like last week — our attention is promptly redirected to the reunion of Johnson and Statham, which is where the real sparks fly. Christopher Rouse's cross-cutting and split-screen editing at the start creatively establishes Statham's former British Special Forces turned mercenary Deckard Shaw into Hobbs' polar opposite, which becomes a recurring running gag between the two. According to each other, one is an "ice-cold can of whoop-ass" while the other is "a champagne problem." But as much fun as it is to see them violently take care of business, the real action comes from their chemistry and swift joshing of one another. The silly jabs hysterically dig at their masculinity, always trying to one-up the other's insults with the airplane sequence being a side-splitting highlight.

Of course, this is to be expected from an action-comedy that blatantly borrows from the buddy-cop formula, and in that respect, Hobbs & Shaw absolutely delivers and at times, even feels like something reminiscent of the 1980s and 90s odd-couple matchup. While the visuals and over-the-top spectacle feed our movie-going imaginations, the interplay of a mismatched pair is ultimately the glue holding the whole absurdity together. And in David Leitch's (Deadpool 2, Atomic Blonde) film, Johnson and Statham make a great team against cyber-genetically enhanced megalomaniac Brixton Lore (Idris Elba), a terrorist whose villainous goal probably came to him after watching Avengers: Infinity War but probably shouldn't have waited until Endgame to see how it would also end for him. Nevertheless, the baddie makes for a frustratingly-difficult foe in an impressively tight script that's pure rip-roaring, flamboyantly-fun escapism.

Universal Studios Home Entertainment brings Fast & Furious Presents: Hobbs & Shaw to 4K Ultra HD Blu-ray as a two-disc combo pack with a Digital Copy code. When redeeming said code via Universal's website or Movies Anywhere, users have access to the 4K Dolby Vision version with Dolby Atmos audio. The triple-layered UHD100 disc sits comfortably opposite a Region Free, BD50 disc inside a black, eco-elite case with a lightly-embossed slipcover. At startup, the disc goes straight to a static screen with the usual options along the left side and music. 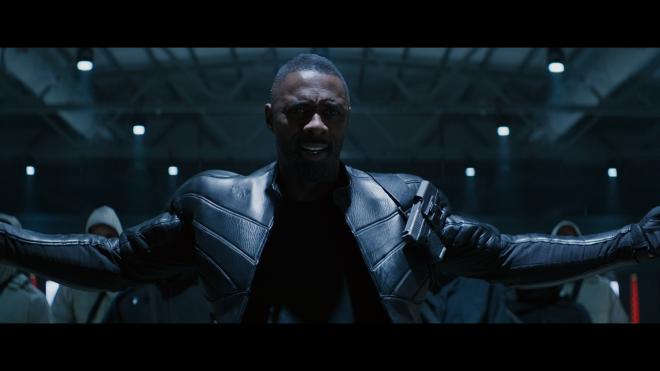 Rippling muscles and deeply-furrowed brows spectacularly crash through Ultra HD supercharged with an awesomely muscular HEVC H.265 encode, delivering a welcomed uptick in overall definition compared to its Blu-ray brethren. Shot on the Arri Alexa camera system capable of up to 3.4K resolution but later mastered to a 2K digital intermediate, the buddy-comedy actioner spins unto the scene with sharp details throughout. From the stitching in the fabric, texture and minute features of Elba's high-tech suit to the individual whiskers of Statham's face, the upconvert is, on the whole, a tad more distinct and well-defined, and facial complexions expose every wrinkle, pore and negligible blemish. However, there are several instances of mild aliasing along the sharpest edges, and resolution levels dip slightly during the CG action, looking a bit cartoonish compared to the picture's better sequences.

Nevertheless, the freshly-minted upconvert's greatest strength comes by way of improved contrast and brightness balance. Admittedly, it's not a dramatic jump over its HD SDR counterpart, but the small, nuanced differences are nonetheless notable and appreciated, boasting crisper, more brilliant whites. Specular highlights are also tighter with a bit more intensity and dazzling radiance while marginally revealing more of the finer details within the hottest spots, like the sun's glare on faces and along the edges of clouds or in the plume of explosions. At the same time, blacks are inkier and truer with excellent gradational differences in the various shades. The action is continuously showered in darker, velvetier shadows that penetrate deep into the screen, providing the 2.39:1 image with a lovely cinematic quality.

Similar to the contrast and brightness, the improvement in the overall color gamut is small and subtle, which is due to the creative, stylized cinematography of Jonathan Sela, arguably making this encode faithful to the filmmakers' intentions. Still, the Dolby Vision HDR presentation is definitely an upgrade, displaying slightly richer and more saturated primaries, especially in the deeper ruby-cherry reds and livelier, fuller emerald greens. The orange-teal palette bathes the city sequences with a colder, arctic cerulean blues, making the fiery-orange explosions and gunfire dramatically pop. Meanwhile, the climactic battle in Somoa benefits greatly from the warmer canary and buttery yellows mixed with sepia tans, sandy browns and other earth tones, giving the island a lush, animated, looking-through-a-window beauty. (Dolby Vision Video Rating: 92/100) 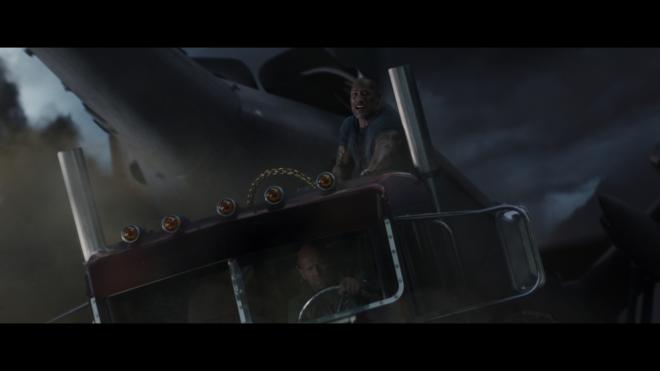 However, given the excessively animated visuals, I was honestly expecting something more consistently immersive and a bit more activity in the ceiling channels. That is not to say or suggest the track doesn't come with some awesomely spectacular moments. Action sequences, for example, are layered with debris falling from above and all around the listening area, various vehicles effectively moving throughout the entire room and helicopters convincingly panning overhead. Notwithstanding, the surrounds suddenly fall silent during the more character-driven moments, and these lulls are apparent enough to note and can mildly distract, such as the sequences in Somoa feeling as though seemingly lacking wildlife.

In spite of all that, the object-based mix still manages to satisfy with plenty of other effects in the background bouncing between the front channels, into the off-screen space and the top heights, generating a spacious and highly-engaging soundstage. Imaging is continuously broad with an effective expansive feel, exhibiting a superbly detailed and extensive midrange that maintains excellent clarity during the loudest, ear-piercing moments. At the same time, vocals are very well-prioritized and precise above the bombastic action. And to be perfectly honest, the low-end could be stronger and even dig deeper in some instances, but overall, the bass is quite robust with enough of a palpable weight to shake the couch and walls (bass chart).

There may a couple things here and there to quibble about, but in the end, the Atmos track gets the job done and is sure to make most fans more than happy. (Dolby Atmos Audio Rating: 92/100) 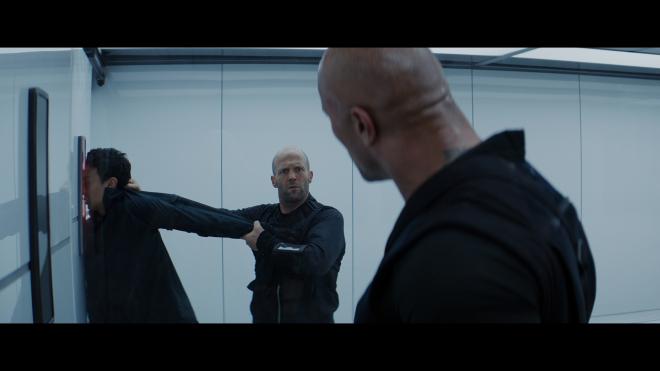 The spectacularly silly but fun actioner debuts on Ultra HD with a decent selection of bonus material, which is the same collection as its day-and-date Blu-ray counterpart. 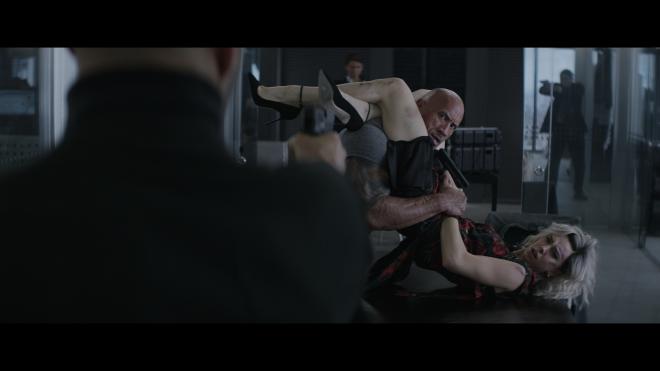 The Fast & Furious series takes a sharp left turn in the right direction with Hobbs & Shaw, an unexpectedly fun and spectacularly satisfying installment. With Dwayne Johnson and Jason Statham reprising their roles as the titular characters, the spinoff sequel remains true to the franchise's central theme of family revving through the familiar odd-couple buddy-cop formula and joined by Vanessa Kirby and Idris Elba. The movie goes ballistic on Ultra HD with a strappingly muscular 4K Dolby Vision HDR video and a beefy, high-octane Dolby Atmos soundtrack, a presentation that jumps over and runs circles around its Blu-ray counterpart. Sharing the same set of supplements as with the BD, the overall UHD package is a highly recommended addition to the 4K library.

Sale Price 14.4
List Price 29.98
Buy Now
3rd Party 12.65
In Stock.
See what people are saying about this story or others
See Comments in Forum
Previous Next
Pre-Orders
Tomorrow's latest releases