Based on Stephen King's novel, IT Chapter Two satisfyingly concludes a decades-long saga against the child-murdering clown Pennywise, but a nearly three-hour runtime is more likely to scare viewers away than the movie itself. Nevertheless, the sequel terrorizes 4K Ultra HD with a frightfully excellent Dolby Vision HDR presentation, a demo-worthy Dolby Atmos track but a small set of bonuses. Nevertheless, the overall UHD package ultimately makes a Recommended addition to the UHD library and for devoted horror fans.

At times funny and hair-raisingly creepy but also somewhat humdrum and stale at others, IT Chapter Two is nonetheless a strong follow-up to the unexpected 2017 phenomenon that reignited our collective fear of clowns. Fascinatingly, those same mundane moments can also be its more memorable segments, providing just enough of a chuckle to keep audiences invested but not quite sufficient to push this production into the same realm of greatness as its predecessor. That may seem weird and contradictory, but much like the fear-inducing, child-devouring sewer monster calling itself Pennywise the Dancing Clown (Bill Skarsgård), this sequel supernaturally floats somewhere between humorously scary and tragically forced. From director Andy Muschietti and writer Gary Dauberman, the same duo responsible for the first movie's success, the scares are visually captivating and eerie, but the attempt at humor just as soon undermines their potential to induce nightmares.

The problem is with the production's level of self-awareness and a series of meta-jokes that begin as comically clever but soon depreciate into shallow one-liners accompanied by eye-rolling sighs. The joke is at the expense of successful mystery novelist Bill Denbrough (James McAvoy), who is introduced while his book is being adapted by Peter Bogdanovich, a legendary filmmaker basically wasted to bluntly tell our chief protagonist that his endings suck. The gag is, of course, immediately directed at the original book by Stephen King, who makes a cameo appearance as an antique shop owner only to repeat the same phrase at Bill's face. But at the same time, it could also be viewed as Muschietti's shrewdly sly way of setting his adaptation apart, hyping the audience's expectations for a departure from the book. Unfortunately, Muschietti and crew don't actually stray too far and ultimately, deliver another letdown of cosmic proportions. Again, visually enthralling but weirdly dry and ho-hum. 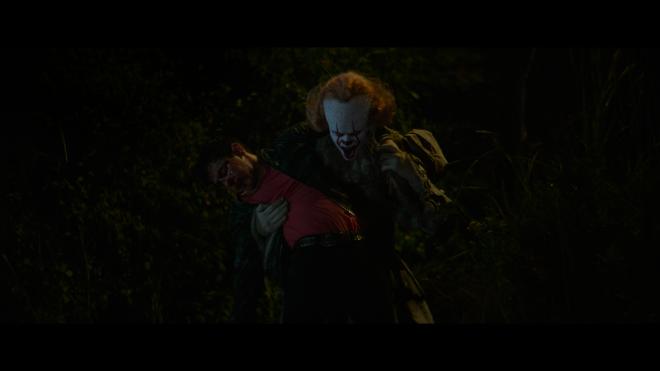 Meanwhile, the rest of the cast feels as though laboring to mimic the performances of their child counterparts from the first movie. At first, that may seem like stating the obvious, but it's somewhat difficult to see the characters as full-fledged adults when the movie even goes out of its way to also remind viewers of that amazingly talented ensemble with several abruptly edited flashbacks. We're never really given a chance to enjoy Ben (Jay Ryan), Mike (Isaiah Mustafa) and Eddie (James Ransone) as individuals, outside of being dolefully unhappy versions of their younger selves. Beverly (Jessica Chastain), on the other hand, feels as though she's matured and grown, a tragically heavy-hearted woman hiding a fiery passion she wishes she could embrace. But the unexpected standout is Bill Hader as the stand-up comic Richie, the group's foul-mouthed jester who refuses to be anyone's fool or chump but whose constant clowning around conceals deeper, troubling secrets.

The filmmakers admirably aim for a faithful adaptation of King's novel, which for the most part works well and thanks in part to the outstanding performances of Chastain, Hader and Skarsgård. Dauberman's script lovely captures the original's central theme of adults haunted by the tragedies of childhood, forever tormented by the irreversible scars of the past. And the mysterious alien monster terrorizing the small town of Derry represents those fears in all its various forms, be it a deceptively friendly clown or an eight-legged monstrosity. As the true killer clown from outer space, Pennywise is no easy fiend to overcome since it requires crawling deep into one's subconscious in order to flush it out and face it without fear. However, in spite of such noteworthy praise, IT Chapter Two also tends to drag in some spots, still full of disturbingly surreal visuals but lacking in terror or suspense, and in a horror film pushing nearly three-hours long, this sequel is no easy picnic to sit through.

Warner Home Video brings IT Chapter Two on Ultra HD Blu-ray as a three-disc combo pack with a Digital Copy code. When redeeming said code at WB.com and MoviesAnywhere, users have access to the 4K version in Dolby Vision with Dolby Atmos audio. The triple-layered UHD100 disc sits comfortably opposite a Region Free, BD50 copy and a third BD25 disc containing supplements. All three are housed in a black, eco-vortex case with a cardboard slipcover. At startup, viewers are taken to a generic static screen with the usual options along the bottom and music playing in the background.

The sequel debuts on Ultra HD with an excellent and mostly beautiful HEVC H.265 encode, delivering a few welcomed improvements over its Blu-ray counterpart. But on the whole, this UHD edition, which features HDR10+ metadata for those with the capabilities, doesn't offer a significant jump over the HD version.

The movie was shot on the Arri Alexa camera system, capable of up to 3.4K resolution, and those elements were likely mastered to a 2K digital intermediate. This upscaled transfer shows a slight uptick in overall definition, but it's not by much. To be sure, the fine lines and details in the buildings, furniture and the stage production are a tad sharper, the stitching and texture of the fabric in the clothing and Pennywise's suit is more distinct, and facial complexions are more revealing, exposing the pores and minor blemishes with better clarity. However, the picture can seem faintly noisy at times and ever so mildly of lower resolution, such as the Chinese restaurant scene or when Pennywise lures little Victoria under the bleaches. And there are also several instances of minor aliasing along the sharpest edges.

The better and more appreciable aspects are without a doubt the improved wider color gamut, showering the disturbing, nightmarish visuals with a fuller, more vibrant array of primaries. The Dolby Vision HDR presentation supplies the town of Derry with livelier emerald greens in the grass and a more vigorous pine shade in the leaves of trees, and the reds range from the flamboyant candy rose in Pennywise's makeup and balloons to the dark, ruby crimson in the blood. The orange-teal cinematography benefits dramatically, especially in adult Richie's greenish cyan vision in the park while bathing the rest of the action in warm canary yellows. Whether it's Pennywise wild wig or Beverly fiery-red hair, oranges pop with vivid, animated energy while flesh tones in the entire cast appear rosier, healthier and more lifelike.

The freshly-minted 4K video also arrives into Derry with radiant and dynamic contrast, showcasing pitch-perfect, intensely-glowing whites, from some of the bleach-white clothing to the various light fixtures. Specular highlights are beaming with a resplendent intensity while dazzling the screen with a crisp, narrow glow, allowing for better clarity of the finer details in the various lights, the edges of clouds and the blooming Deadlights. Likewise, the action is continuously bathed in richer, opulent blacks and inkier, midnight shadows while maintaining superb visibility within the darkest, murkiest corners, providing the 2.39:1 with appreciable depth and a lovely cinematic quality. (Dolby Vision Video Rating: 84/100)

The screams and laughter fill home theaters with a fantastically awesome, demo-worthy Dolby Atmos soundtrack that's sure to deliver the chills and frights.

Imaging continuously feels wide and spacious with lots of background activity fluidly moving across the screen while the midrange exhibits distinct definition and separation in the higher frequencies. At the same time, vocals are always precise and well-prioritized, but arguably, the most impressive aspect of this track is a shockingly authoritative, immensely powerful and wall-rattling low-end that sends shivers throughout the room. Several moments even dig deep into the ultra-low depths, as low as 20Hz with frightening effectiveness and decibels, sending shockwaves through the room and adding an unexpected weight and impact to the scary visuals (bass chart).

Likewise, rear activity generates a creepy atmosphere, as various ambient effects effortlessly and convincingly pan between the surround speakers. Occasionally, the chirping of birds, the rustling of leaves and the commotion of carnival patrons fill the room and scatter from above, but the best moments are the scares enveloping the listener with various terrifying noises, employing the ceiling channels for broadening and expanding the action into an amusing hemispheric soundfield. Pennywise's voice echoes through the overheads during some of the more intense sequences while Benjamin Wallfisch's score splendidly bleeds into the top heights with excellent clarity and fidelity. (Dolby Atmos Audio Rating: 96/100)

Director Andy Muschietti and writer Gary Dauberman return for IT Chapter Two, based on a Stephen King's novel about a sewer-dwelling, child-murdering monster disguised as a clown terrorizing the sleepy town of Derry. Largely driven by an emotional plot, excellent performances and nightmarish visuals, the sequel is a strong and mostly satisfying conclusion to 2017's horror phenomenon, but the lack of scares and suspenseful story is barely enough to warrant or sustain a nearly three-hour runtime. Nevertheless, Pennywise lures its victims to the 4K Ultra HD sewers with a frightfully beautiful Dolby Vision HDR presentation offering a welcomed step up over the Blu-ray and a fantastically creepy, demo-worthy Dolby Atmos soundtrack. Featuring a decent but small set of supplements, the overall UHD package is ultimately a recommended addition to the UHD library and for devoted horror fans.

Sale Price 22.99
List Price 24.98
Buy Now
3rd Party 22.99
In Stock.
See what people are saying about this story or others
See Comments in Forum
Previous Next
Pre-Orders
Tomorrow's latest releases