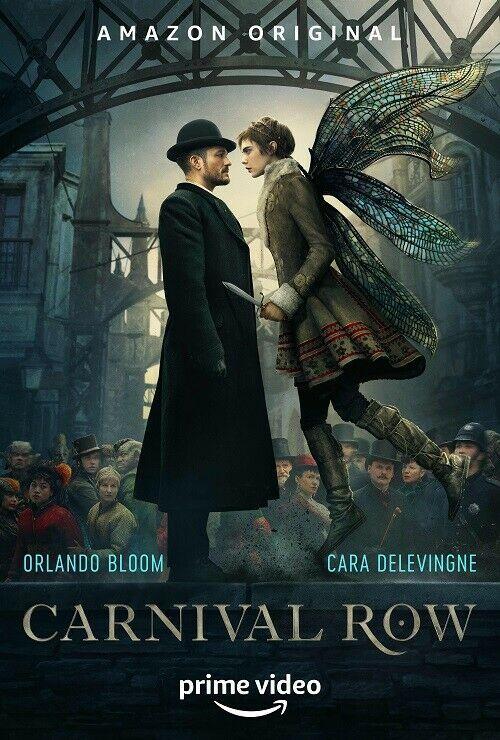 HBO left a big void in our television watching schedule with the end of Game of Thrones. There really isn't anything like it out there at the moment, but I bet we'll be getting a ton of spinoff shows in the coming years. Luckily, Amazon Prime has now released Carnival Row, which plays out a lot like Game of Thrones with its heavy helping of sex and violence. The difference is that now we have a Sherlock Holmes-type character played by a gruff-voiced Orlando Bloom in a somber town that has been invaded by faeries and other fantastical creatures.

Imagine Se7en set in an alt-universe Victorian London with creatures from The Lord of the Rings.

The fantasy aspect has a Guillermo del Toro feeling of gothic buildings and costumes, where winged pixies, horned creatures, and other fantastical creatures have traveled to, due in part to a brooding war. Orland Bloom plays Rycroft Philostrate, a serious police detective who is trying to solve a series of murders in town. He meets Vignette Stonemoss (Cara Delevingne), a winged Irish accented faerie who is up for a fight.

As the series starts, it introduces us to several different families and factions who are on the brink war. You can tell there is a ton of history and landmarks that we will get to visit throughout the series. Watching the first two episodes can be overwhelming in that there are so many characters to meet for the first time and can be difficult to remember everyone. By the third episode, there is much more backstory and origins that are told, so we can get a better grip at the story and characters at hand.

As the show runs on, the dispute between the humans and mythical creatures is growing bigger, where the head of the town Absalom Breakspear (Jared Harris) is trying to not lose his wits and his townsfolk in the impending war. Just like Game of Thrones, there is plenty of sex and violence to go around with almost every character, and I imagine if you're into faeries and pixies, you will have finally found a show just for you.

The show's underlying subtext tackles themes like racism and immigration, both of which are very relevant today. It's done subtly enough with Carnival Row and never hits you over the head or feels preachy. If you're looking for the long-haired woodland elf Orlando Bloom, you'll be disappointed. Bloom sports a beard, a bowling hat, and has a mean Batman voice for most of the show. Cara Delevingne does a good job with her winged character and her Irish accent is believable.

A second season has already been ordered, but for now, there are eight episodes streaming on Amazon. For those missing Game of Thrones, this Carnival Row series should pick up the slack, if you don't mind faeries, a Victorian setting, and rich history in storytelling. It's just getting set up, but there is enough fire here to get you hooked, which already has me salivating for more. 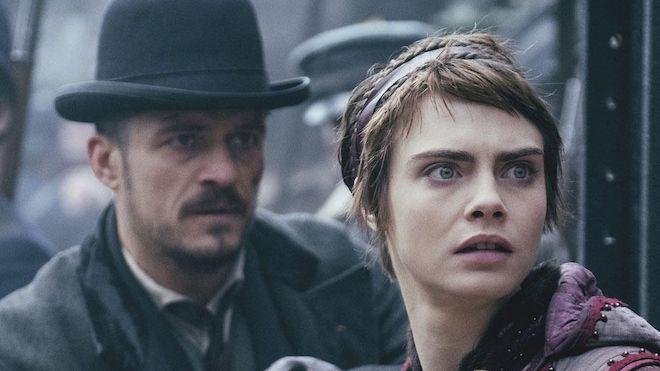 Amazon flies Carnival Row into a 2160p Ultra HD with HDR10 video presentation that looks excellent. Colors and detail are rich and vibrant in each episode with some amazing gothic filters.

Right from the start, you can tell that this is a somber setting. The color palette is mostly mixed with blues, grays, and silvers. When in the wooded areas, the greens can be darker than normal, giving an overall sunless palette. The period costumes, though, strike through all of the shadowy fog with bright reds, light blues, yellows, and pinks that are showcases on excellent wardrobe and umbrellas. The orange glow that lanterns give when in large houses or in exterior nighttime settings look fantastic and light up the screen wonderfully. Black levels are very dark and inky without any issues of crush or murky shadows. Since a lot of the show has a low-lit feeling, these black levels are key and they look amazing. For instance, during a sex scene between a human and faery easily displays the colors on her wings with only a couple of candles lit in the background. That's how good the HDR10 enhances the color in the show.

The detail is quite vivid in both the darkness and daytime sequences. You'll be able to make out the lines and imperfections in the horns on the faces of the creatures, along with the details in every fairy's wing. Practical effects of gore and makeup effects look incredible and seem to have a big budget behind it. Individual hairs, blemishes, and wrinkles show up pleasantly as well. The detail in the old buildings showcases every laid brick and pice of dirt nicely, even during a nighttime chase sequence. I was wholly satisfied with this phenomenal image.

This 4K presentation is nothing to scoff at. On the contrary, for such a dark show, Both in visual style and tone, the image is lively and delight to watch, especially with the upgraded HDR10. 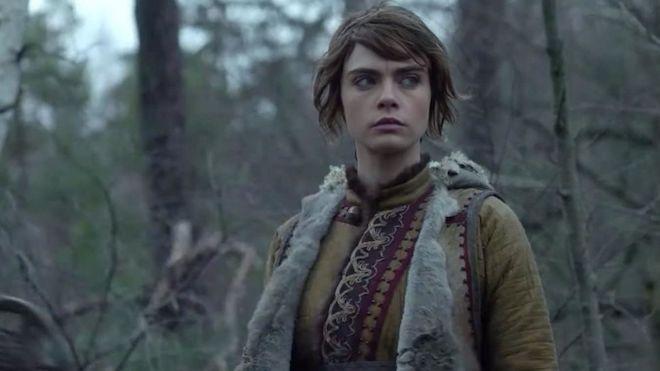 Sound effects like flapping wings, mystical noises, and old ships out on the ocean are sensational. Each audio effect is well-balanced and loud. They all provide a realistic sound in this unrealistic world and fully immerses you into the time period. Rain and thunder provide the necessary low end of bass with a nice rumble and the musical cues always add to the suspense or romance in each scene without overpowering any other sound aspect. The atmospherics of people talking in the background, other wings flapping in the air, or townspeople walking in the dirt all sound off nicely in the rear speakers often. Dialogue is clean and easy to follow. The contrast of Cara's sweet, smooth voice to Orlando's raspy voice is nice to hear when the two converse.

This Dolby Digital 5.1 audio mix is robust for all the right reasons and sounds glorious with all of its surprising moments, but we'd love to see what the show's creators could do with this universe and the Dolby Atmos format. (Come on, Amazon, keet up with Netflix and add some more Atmos to your originals!) Still, despite a native hemispherical mix, this 5.1 track up-mixes quite well using Dolby Surround or DTS:Neural:X. 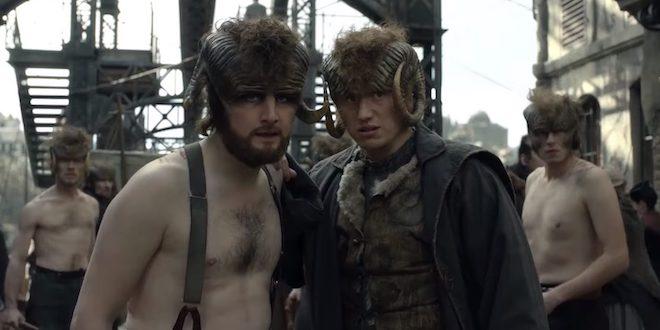 Only a few short bonus features so far are found here, including a talk with the show creator, origins of two characters and a trailer. It looks like more bonus features are coming soon.

Carnival Row crosses the detective noir genre with the fantasy element quite well in this eight-episode first season. The series is prosperous in character and story so far, and I can only imagine that there is much more to come next season. If you are 4K HDR10 capable and an Amazon Prime subscriber, this new series features a splendid video presentation and marvelous 5.1 audio that up-mixes quite well. This is one show I find myself in for the long haul. Highly Recommended!

Sale Price 10
Buy Now
3rd Party 10
In Stock.
See what people are saying about this story or others
See Comments in Forum
Previous Next
Pre-Orders
Tomorrow's latest releases