Another world… another time… another age... The world of Thra thrives in this exciting new 10-episode prequel series The Dark Crystal: Age of Resistance from Jim Henson Productions and Netflix. Reliant on classic practical effects puppets, familiar faces and new heroes rise in this massive expansion to the classic fantasy film. It's visually stunning with 4K UHD with Dolby Vision and gets an extra kick with Dolby Atmos engaged. It's exciting and new while feeling old school and familiar. Very Highly Recommended.

"Light the fires of resistance!"

Long ago, the world of Thra is green and good. The Gelfling clans are divided and in service to the vile, buzzard-like Skeksis with peace an illusion. While the Gelfling are distracted, the Skeksis Emperor (Jason Isaacs), Scientist (Mark Hamill), Chamberlain (Simon Pegg), and other prominent Skeksis devise a sinister plan enabling them to live forever. The brave Gelfing warrior Rian (Taron Egerton), the Grottan Gelfling Deet (Nathalie Emmanuel) and her Podling companion Hup must quest to find a way to unite the Gelfling clans and stop the Skeksis. Their hope rests on the efforts of the all-seeing Aughra (Donna Kimball), but even Aughra may be too late to turn back The Darkening that is infecting Thra. 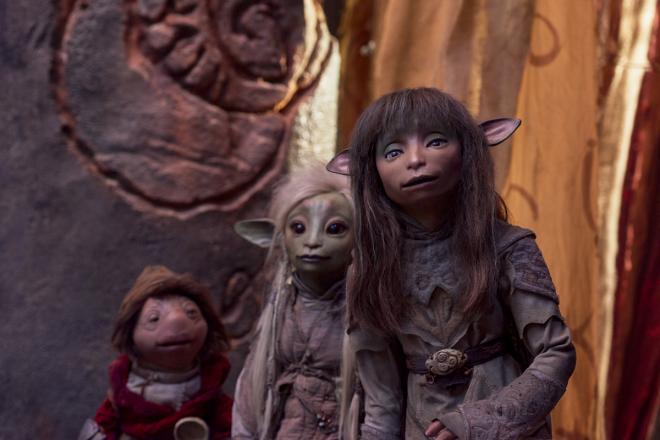 (All images courtesy of Netflix)

As I mentioned in my review for the original 1982 The Dark Crystal, I virtually grew up with the world of Thra. I was barely six-months-old when my parents took my sister and me to see it in the theater. I don't remember this, but my folks held onto the movie ticket stub. After countless viewings over 37 years, I still love that film. It's an intricate story but most of all I love the creatures that were brought to life with innovative and detailed puppets.

It's because of this childhood-engrained love for this movie that I was initially excited, but hesitant when The Dark Crystal: Age of Resistance was announced. For years we were only given small hints of the production. Even when I interviewed Lisa Henson, I did my best to glean some insight about the show but she was pretty tight-lipped only giving vague but exciting comments. Now that I've pegged my way through all ten episodes directed entirely by Louis Leterrier and developed by Jeffrey Addiss and Will Matthews, any nervousness I had was swiftly put to rest.

I loved every moment of it!

From the opening Sigourney Weaver-narrated introduction, the world of Thra became instantly massive and intricate. Like Tolkien big. If The Dark Crystal was the Bass/Rankin animated version of The Hobbit, The Dark Crystal: Age of Resistance is like jumping headfirst into The Lord of the Rings! 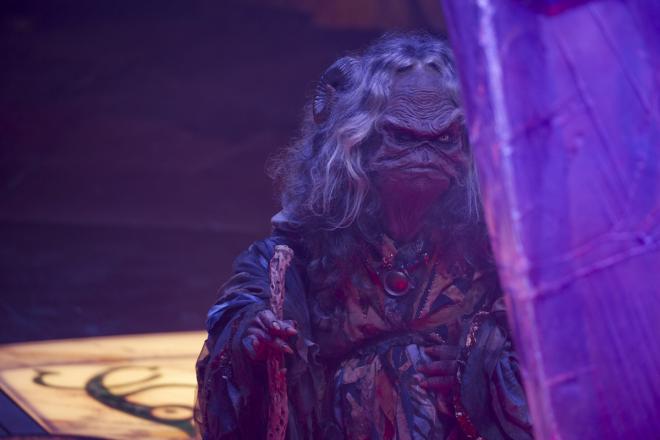 Now, if you've read any of the graphic novels or YA books that came out in the last few years, you should have enough familiarity to be ahead of the game with the world-building. That said, even if you're coming into this show ice-cold, you won't be left behind for long! Things move fast because there's a lot of ground to cover, but it sets it's pace nicely and you're never lost. You're introduced to the different Gelfling clans, you get to meet several new disgusting but incredibly entertaining Skeksis, and the series introduces a massive variety of new creatures, the vast majority brought to life with puppets and practical effects!

[EDITOR'S NOTE: Hi, folks, Palmer here with a quick note for anyone wondering, "how much do I need to know about The Dark Crystal to watch this series?" I can confirm this new series easy to digest without knowing the movie or ancillary materials. It's probably MORE rewarding for fans like Matthew, but even for a newb like me, this show is enthralling stuff from frame one, oozing with creativity and beauty. Okay, back to Matthew.]

Despite all of the practical effects work, some CGI was used and it's pretty obvious, especially when watching with HDR10 or Dolby Vision. But that's a good thing! The obvious CGI effects only highlight just how massive this production is and just how many genuine practical effects and puppets were employed to bring it to life! There are so many sequences that are just jaw-dropping stunning. It's only fitting that a story this epic be given such incredible puppet creatures! 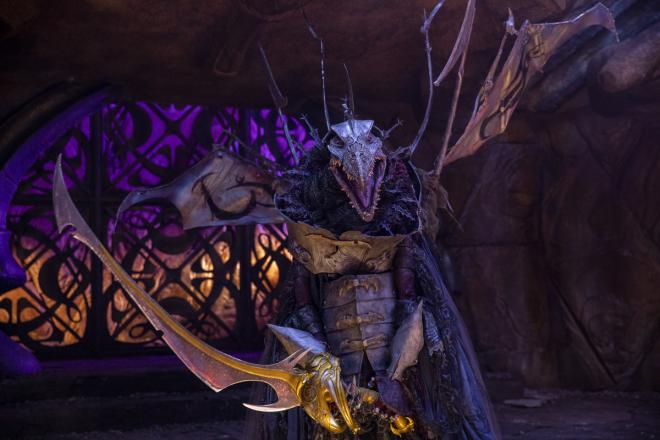 Because I'm confined by disclosure agreements and a desire not to spoil a single moment for anyone, I can't mention more plot specifics and my reactions to them. I will say you'll enjoy how delightfully disgusting the Skeksis are. You'll appreciate the humor and the show's tongue-in-cheek self-awareness within its genre. You'll be frightened by The Hunter voiced perfectly by the amazing Ralph Ineson. You'll fall in love with so many new creatures and characters -- especially the Podling Paladin Hup and his mighty spoon! By the time the credits roll on the final episode, you'll cheer and be left excited because there is so much more story to tell.

Not gonna lie, I got more than a little misty-eyed several times throughout the episodes! Chalk it up to genuine wonder or just a massive amount of heartfelt nostalgia, I loved it. Every minute of it. It's a terrific expansion of Jim Henson's original vision while reintroducing the universe for a new generation to enjoy. And I want more! If you're a fan of the original movie I have little doubt you'll love The Dark Crystal: Age of Resistance. My only hope now is we don't have to wait too long for the next series. For now, I'm more than happy to start the show all over again from episode one.

Run (don't walk) to see this on August 30th when it debuts on Netflix!

Netflix returns puppet fans to the world of Thra with The Dark Crystal: Age of Resistance with 4K UHD Streaming with Dolby Vision and Dolby Atmos for compatible displays and audio systems (FYI, you need a Netflix Premium Plan to access). HDR10 is also available and the show can naturally be viewed in SDR 1080p. 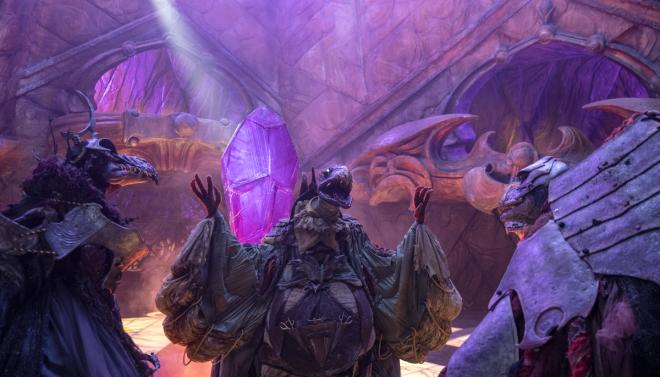 Reportedly captured at 8K, I don't have any information of the finishing resolution, whether a 2K DI or a full 4K DI or beyond. Regardless, The Dark Crystal: Age of Resistance is beautiful! From the opening moments featuring the Thra history overview to the reintroduction of the Skeksis, there is so much detail to absorb! The puppetry is intricate and richly specific. The Collector Skeksis (voiced wonderfully by Awkwafina) is a delightfully disgusting standout as her face is covered with oozing pustules that periodically rupture! I was really impressed with the new Gefling puppets as they're much more expressive than before with very unique character features so you can always tell them apart. Set design is equally impressive with so much to see in every frame that it's hard not to keep going with the series when you want to go back and look at everything again.

With Dolby Vision HDR employed, the show takes on richly nuanced coloring. This is particularly notable in the Gelfling's flesh tones compared to the 1080p. You can see much more gradience in their colorings where the 1080p made them look a little more uniform depending on the clan they're from. Shades of purple from the Crystal and when the Skeksis use their machines to harness its power really pop off the screen. Primaries are often stunning. There is so much lively color with so much range throughout the world of Thra. Again, it's so easy to get lost just looking at small details that you may have to reverse a little because you might miss some plot! Black levels and contrast are pitch-perfect allowing for a tremendous amount of depth to the screen. Even when there is some heavier CGI background with the puppets composited in, that sense of purposeful depth is never lost. Deet flying through her underground kingdom is a particular standout moment of the first episode.

In 1080p, the show remains incredibly detailed - but doesn't quite enjoy the same intricacies the full 4K presentation had to offer. Closeup and middle shots still looked pretty great allowing you to really appreciate the impressive physical practical creature effects that populate every inch of the screen.

There's no avoiding the fact that the 4K Dolby Vision stream is the best way to see this show, but no matter how you watch it The Dark Crystal: Age of Resistance is a feast for the eyes! 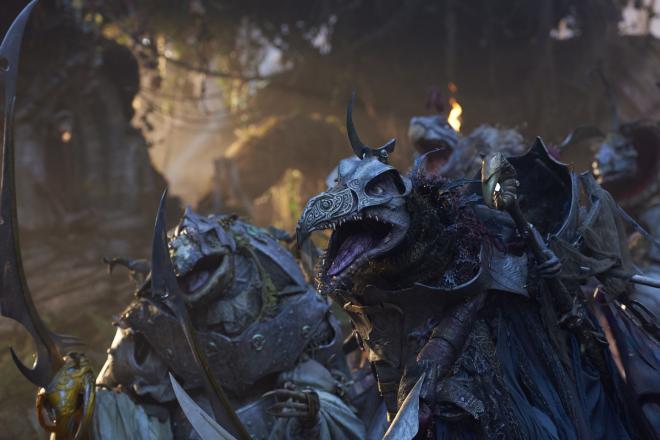 The Dark Crystal Age of Resistance may not have the most overly aggressive Dolby Atmos audio mix, but it makes terrific use of the extra channels and vertical spacing where it counts most. Cavernous locations, anytime the female Gelfling fly, or whenever Mark Hamill's Scientist activates his machinery with chains and gears churning and pulling all over the screen, the Atmos effect really pays off! Any time the Skeksis travel in their Armorling-powered carriages, the rumbling rolling sound of the caterpillar-like creatures gives a fun rumble in the LFE while allowing for some nice dimensionality during a couple of really cool action sequences.

Dialogue is clean and clear throughout. Even during the heaviest action beats, the important dialogue is never lost. Activity is well-spaced throughout the channels and even during the quietest moments, there's plenty of side sound effects and dimensionality to keep the channels active. The series score by composers Daniel Pemberton and Samuel Sim accent the show's key moments wonderfully without overcrowding the mix. Levels are spot on. Normal settings are fine, but I cranked this one to give it a nice channel-rattling immersive presence. Overall, I wouldn't say it's the most aggressive or prominent Atmos presentation, but for streaming, this was solid work and kicked where it counts most. The final episode is a real treat! 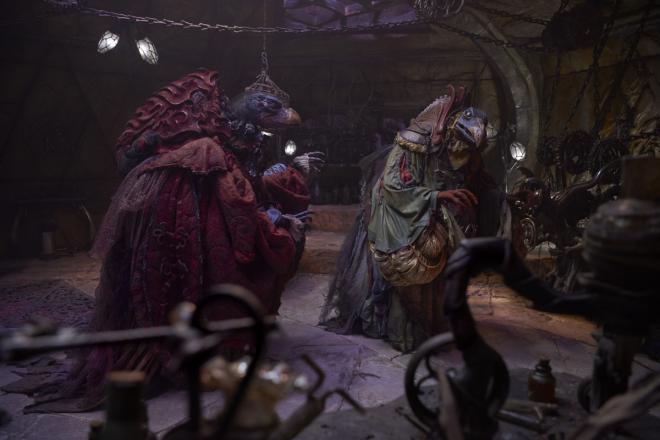 While there's not a lot here, the brief behind the scenes material gives you only a small taste of the work that went into bringing this show to life. I hope there's a disc release because I want hours of bonus features! I need hours of this kind of material! 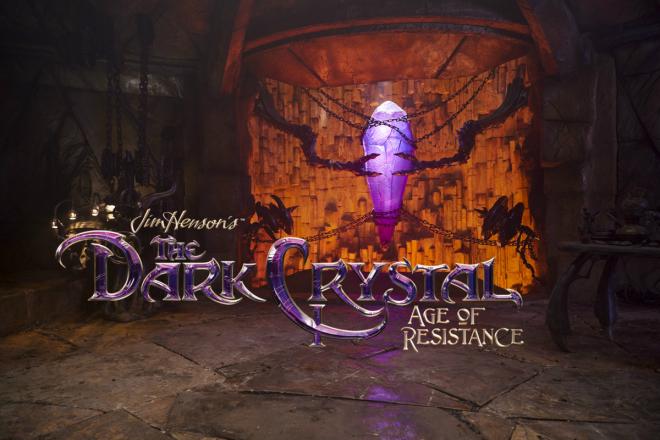 The Dark Crystal: Age of Resistance is a massive production -- the kind you just don't see very often anymore. With so many sci-fi and tentpole blockbusters trading in lifeless CGI, this show makes you long for the days of true practical effects spectacle. This is an intricately crafted and impressively well-executed production from start to finish. Not only is it a visual wonder, but so much plot and story have been added greatly expanding the world of Thra. So many new creatures and characters were introduced, I hope there is another series already in development. I don't want to wait another 30 years for the next one!

The Dark Crystal: Age of Resistance lands on Netflix August 30th. If you're equipped for 4K Dolby Vision and Dolby Atmos audio, it's an impressive presentation! Even if you're not set up with the latest and greatest technology, this is still a visually stunning series that clearly spared no expense to bring it to vivid practical life. The story is exciting. The characters are fantastic. The creature effects are probably the best we've seen from Jim Henson's creature shop. By the time the credits rolled, I was ready to start it all over again! If you loved the original The Dark Crystal  - Age of Resistance was well worth the wait and will leave you thirsty for more. Very Highly Recommended.