Yesterday will make all your troubles seem so far away. Director Danny Boyle's sweet, tuneful film about a world bereft of The Beatles and the one man who remembers them and uses their musical legacy to bolster his own performing career tells an uplifting romantic tale while saluting one of the greatest bands of all time. A clever script, likable cast, and a slew of classic Beatles songs make this movie a true delight, while Universal's terrific HDR10+ presentation and active Atmos soundtrack immerse us in an engaging alternate universe. Recommended.

What if The Beatles never existed? That’s difficult - okay, impossible - to imagine, but writer Richard Curtis did just that when he made such an unthinkable idea the central premise of Yesterday, an innocuous yet very enjoyable and sweet comedy that chronicles one struggling musician’s personal growth and improbable rise to fame. Directed by Danny Boyle with the same sense of wonder and exhilaration that won him an Oscar for Slumdog Millionaire, Yesterday takes a tried-and-true formula and enhances it with an inspired metaphysical twist that works better than it has any right to. When I first saw the trailer for Yesterday before its theatrical release many months ago, my initial reaction was “Oh, come on... That’s so lame.” Yet once a wave of positive buzz engulfed the film, I became far more intrigued, and now that I’ve finally seen Yesterday, I’m happy to report it lives up to its enthusiastic word-of-mouth.

Yesterday charts the meteoric ascent of Jack Malik (Himesh Patel), a dedicated but often discouraged British singer-songwriter who attracts paltry crowds wherever he plays and never gets the breaks he feels he deserves. His childhood friend Ellie (Lily James), an attractive schoolteacher who not-so-secretly pines for him, acts as his manager and secures sporadic gigs in and around Suffolk, England. After a particularly disappointing appearance at a local music festival, Jack seems poised to throw in the towel on his dead-end career and join Ellie in the teaching profession.

Fate, though, intervenes. While riding his bike home that night, Jack gets caught in the middle of a bizarre cosmic phenomenon that causes a complete global blackout for 12 seconds. Engulfed by the darkness, Jack is hit by a bus, and after recovering in the hospital, he comes to realize how the universe has shifted. He sings the song “Yesterday” to his friends as a form of therapy and is stunned when they all think he wrote it! He tries to tell them it‘s a Beatles song, but they look at him blankly and ask, “Who are The Beatles?” Jack can’t believe his ears, but when he later googles The Beatles at home and only the insect comes up in the search, he’s flabbergasted. Then he checks his album collection and all the Beatles records have mysteriously vanished. Nobody, it seems, knows The Beatles ever existed except him.

Which gives Jack an idea. Since supposedly nobody has ever heard the classic Beatles catalogue of megahit tunes, why not begin performing them himself and pass them all off as his own creations. Nobody will ever know their true origin and with a bit of luck he just might become as big a superstar as the legendary pop/rock group. All goes according to plan at the start, but soon the professional and personal ramifications of his actions make Jack question whether he can or even should maintain the charade.

An air of joy and wonder permeate the film, which seems propelled by the same kinetic energy that maybe caused that life-altering blackout. Though the story’s premise requires a hefty suspension of disbelief, Boyle and his earnest cast make it easy to take that leap of faith. So many movies of this sort present an inspired situation rife with conflict and complication, but can’t sustain or resolve it without totally going off the rails. Yet much to its everlasting credit, Yesterday doesn’t feel the need to explain itself or wrap up its narrative with a tidy bow. A more insecure writer or director might feel compelled to put the universe back on its proper axis, but Boyle and Curtis, who penned the scripts of such renowned comedies as Love Actually, Bridget Jones’s Diary, Notting Hill, and Four Weddings and a Funeral, stick to their guns and depict this new reality with a lovely mixture of bemusement and whimsy. Would I like to know why the blackout occurred and how it erased The Beatles from time’s continuum? Of course! Yet such information isn’t essential to the story. How the characters react to it, however, is...and thankfully, that’s the focus of the film.

Ultimately, though, the movie's weight rests on the shoulders of Patel and James, and its success hinges on the strength of their respective portrayals. Yesterday marks Patel's feature film debut and he instantly takes command of the screen. He‘s natural, affable, and also has a great singing voice. Though he's no Paul McCartney, Patel more than adequately covers scads of Beatles hits, including the title song, “Let It Be,” “Back in the USSR,” “Hey Jude,” “I Want to Hold Your Hand,” and especially “The Long and Winding Road.” His innate flair for comedy lends the humor a humble authenticity and he makes a fine romantic lead, too. James complements him well and files a pitch-perfect performance as the luminous and lovelorn Ellie. She and Patel make a terrific rom-com couple, and her mile-wide smile, liquid eyes, and bubbly persona perk up every scene in which she appears.

Rock star Ed Sheeran plays himself (it’s actually a sizable role, not a cameo) and comes off surprisingly well. Just as surprisingly, though, Kate McKinnon as a greedy, self-absorbed music producer and manager strikes a sour note. Though she delivers a few laugh-out-loud lines in her inimitable deadpan style, her one-note portrayal often seems like an extended riff on one of her Saturday Night Live sketch characters. As a result, her work feels stale and forced, and she never lets us forget we’re watching Kate McKinnon. While it’s easy to accept Yesterday’s fantastical premise, it’s hard to accept McKinnon. She’s the film’s most far-out element and ironically she just doesn’t fit in.

Yesterday is part love story and part coming-of-age tale, but most of all it’s a bona fide celebration of The Beatles’ music, and without wallowing too much in nostalgia reminds us just how brilliant, influential, and relevant the band was...and still is. Beatles songs may be a half-century old, but they’re timeless, and the film proves they’re just as catchy and marketable today as they were in the 1960s and 70s. Yesterday also deftly depicts just how meaningful the Beatles’ catalog is on a personal level, how it spans the entire emotional spectrum, and how nothing can extinguish its far-reaching legacy. Yesterday celebrates the past, but it also champions our present, and reassures us The Beatles will be in our future. And now we know even a cosmic cataclysm can’t change that. 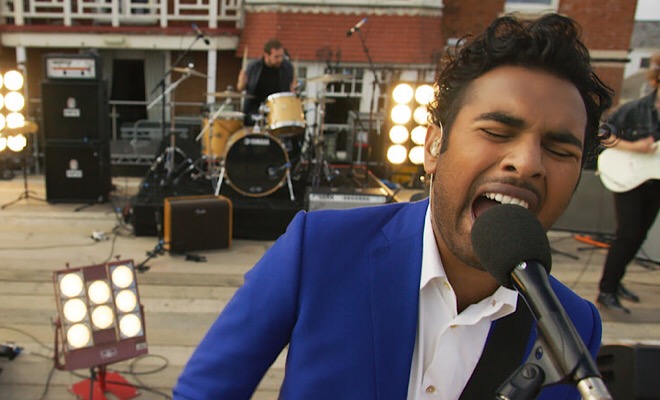 Yesterday arrives on 4K UHD packaged in a standard case inside a sleeve with raised lettering. A Blu-ray disc and leaflet containing a code to access the Movies Anywhere digital copy are tucked inside the front cover. Video codec is 2160p/HEVC H.265 and default audio is Dolby Atmos. Once the disc is inserted into the player, the full-motion menu with music immediately pops up; no previews or promos precede it.

Yesterday may provoke nostalgic pangs for the 1960s, but its vibrant, razor sharp 2160p/HEVC H.265 encode is all about today...and maybe even tomorrow. That's because Yesterday is presented in the still fledgling HDR10+ format, which is very exciting...but only if you have equipment that supports HDR10+. I'm only halfway there. My Panasonic UB820 4K UHD Blu-ray player supports HDR10+, but my LG E8PUA OLED TV - as of this writing - does not. (C'mon LG, give me a firmware update!) So I was only able to view Yesterday in regular old HDR10, but let me tell you, it was still a big treat. Distinguished by a vivid, beautifully contrasted image with deep, bold color, outstanding clarity, and a wonderful sense of depth, Yesterday looks fantastic in 4K UHD.

The smooth, grain-free presentation provides a crisp yet warm picture with only a couple of brief instances of judder and motion blur. Sometimes digital photography can result in a cold, uninviting image, but Christopher Ross' cinematography welcomes us in and often exudes a lovely film-like feel. Even the tiniest details can be discerned, the texture of fabrics and costumes are well rendered, and all the graphics possess clean lines and dazzling color. Vibrant hues abound. Primaries especially pop, whether it's Jack's green T-shirt or royal blue jacket, but more muted shades make a strong impression as well. Rich black levels supply necessary weight, shadow delineation is quite good, flesh tones remain stable and true throughout, and close-ups nicely showcase fine facial features.

All in all, this transfer provides a wonderfully immersive experience with several eye-popping moments. I bet it looks even better in HDR10+. Maybe someday I'll actually get to see it in that format.

I never dreamed I'd rave about the audio of a modest little film like Yesterday, but the Dolby Atmos mix on this disc totally rocks! Most impressive are the overhead channels, which really kick in during the song and concert sequences to provide completely enveloping sound. Once that switch goes on, it's like a big burst of POW emanating from your system, and coupled with the stunning video quality, you really feel like you're in Wembley Stadium. Superior fidelity and tonal depth heighten the impact of the music, but atmospherics come through well, too. The rear speakers get a lot of activity as well, but it's more subtle, and distinct stereo separation across the front channels nicely widens the forward soundscape. Most of the dialogue is easy to comprehend, but occasionally the British accents get a bit thick during rapid or muted exchanges. Just like Yesterday surprised many viewers with its clever premise and warm heart, its audio track surprises with its power, nuance, and complexity. If you're lukewarm about Atmos, especially for non-superhero movies, take a listen to this mix. It will pump up your enthusiasm for sure.

Plenty of supplements are packed onto the disc, and they're all presented in glorious 4K. Most are of the vapid EPK variety, but fans of the movie will get a kick out of the behind-the-scenes material.

Yesterday is fresh, charming, clever, sweet, and often delightful. Director Danny Boyle crafts a romantic and nostalgic film about a cosmic glitch that makes The Beatles vanish into the ethosphere. Only one man on Earth seems to remember them, and he soon hijacks their musical legacy to jumpstart his own sputtering performing career. Boyle's breezy style and an earnest, talented cast bring the tale to life and a vast array of Beatles tunes keep its engine humming. Universal's 4K UHD presentation features a vibrant, immersive HDR10+ transfer, a dynamic Atmos sound mix, and plenty of supplements. Though it runs a few minutes too long and doesn't possess much depth, Yesterday is fun while it lasts and definitely worth a spin or two. Recommended.

Sale Price 18.98
List Price 22.98
Buy Now
3rd Party 5.88
In Stock.
See what people are saying about this story or others
See Comments in Forum
Previous Next
Pre-Orders
Tomorrow's latest releases