Once Upon a Time...in Hollywood - 4K Ultra HD Blu-ray

Quentin Tarantino's Once Upon a Time in Hollywood is an unabashed love letter to Hollywood, a masterful fairytale fueled by loving nostalgia while saturated in a sense of doom and melancholic tragedy. The glitz and glamor of a bygone era premieres on 4K Ultra HD with a magnificently glamorous HDR10 presentation, a marvelously satisfying DTS-HD MA 7.1 track but a small set of bonus material. Overall, the UHD package is Highly Recommended.

It should come as no surprise that Once Upon a Time in Hollywood is Quentin Tarantino's gushing love letter to Hollywood, an undeniable adoration for Tinseltown the film unabashedly and proudly wears on its sleeve. The entire production oozes in its venerating longing for the glory days of La-La Land, drenched in an atmospheric reverence for a city once known as "The Entertainment Capital of the World," a wonderland for dreamers of fame and stardom. And like many of his films, Tarantino's ninth turn in the director's chair confidently speaks to moviegoers in a deeply-acquainted cinematic language, which some, I'm sure, will swiftly find fault as just another of the eccentric filmmaker's shticks. However, this film perhaps speaks more loudly and brazenly than any of his other efforts because it wistfully captures a pivotal year not only in U.S. history but in the history of cinema in general.

This passionate, cherish-worship of a bygone era is a sentimental fantasy at the cusp of Hollywood's Golden Age and the prominence of a New Hollywood. It's a melancholic fairytale driven more by nostalgia for that era's waning years than historical specifics or accuracies, a mournful hallucination commingling the real with the daydream, actual celebrities with amalgamations of various others. Amid an impressive ensemble cast, our central hero is Rick Dalton (played with exceptional effectiveness by Leonardo DiCaprio), the former star of a popular western series called "Bounty Law." With his best friend and stunt double, Cliff Booth (an always excellent Brad Pitt), chauffeuring him around the city, the two are still pursuing the immortality of fame. However, their spirits slowly surrender to the insurmountable dominance of an impending film renaissance and a sudden shift in American culture. 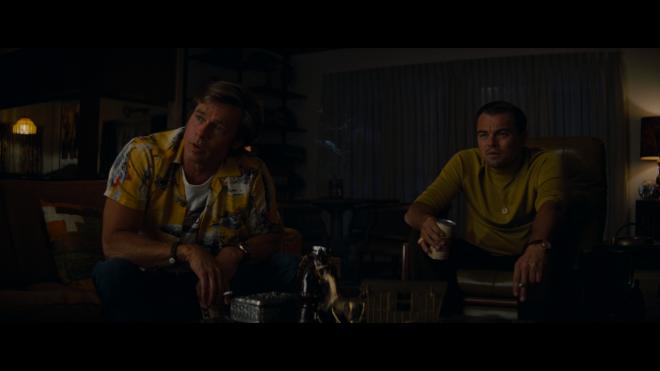 Meanwhile, rising star Sharon Tate (a wonderful Margot Robbie) and her currently in-demand husband Roman Polanski (Rafa? Zawierucha) recently moved in next door. The pair of real-life celebrities at once unmistakably serves as a metaphor for the callously cruel reality of fame always just out of reach for Rick — "I could be one pool party away from starring in a Polanski movie!" But at the same time, Tate also represents the dawn of a new era looming ahead, one that doesn't even take notice of Rick. And with the plot set only a few months from the starlet's ill-fated demise, the story is saturated in a constant sense of dread and doom intensified with cameos by the infamous Charles Manson (Damon Herriman) and his Spahn Ranch family. Tarantino brilliantly places his audience in uncomfortably suspenseful anticipation for the inevitable only to circumvent expectations with an astonishing, grossly-satisfying and cathartic wish fulfillment, making this yet another accomplishment for the filmmaker's oeuvre.

Sony Pictures Home Entertainment brings Quentin Tarantino's Once Upon a Time in Hollywood to Ultra HD Blu-ray as a two-disc combo pack with a flyer for a Digital Copy, which can be redeemed via sonypictures.com and Movies Anywhere. When redeeming said code, users have access to the 4K Dolby Vision version with Dolby Digital Plus 5.1 audio. The triple-layered UHD100 disc sits comfortably opposite a Region Free, BD50 disc inside a black, eco-elite vortex case with a glossy slipcover. At startup, the disc goes straight to an interactive main menu that changes screens while toggling between the usual options while music plays in the background.

Once Upon a Time premieres on Ultra HD with a magnificently glamorous HEVC H.265 encode brightening screens with an excellent and better performance over its Blu-ray costar. Tinseltown was shot on traditional 35mm film with a mix of 8mm and 16mm footage sprinkled throughout, and the elements were later mastered to a 4K digital intermediate.

Bathed in an ultra-fine layer of natural grain, the freshly-minted 2160p transfer shows razor-sharp definition in the streets of Hollywood, in Spahn Ranch and in the various houses and stage sets. Some spots are slightly softer than others, which is to be expected given the stylized photography, but overall, we can plainly make out the unique architectural features and imperfections of the buildings and the tiny cracks on sidewalks while maintaining excellent legibility of various windows, signs and billboards. The individual hairs of the grimy, filthy mops of the Manson Family are distinct, the stitching and threading on their ragged hippie clothing are highly detailed and every pebble on the ground, every splinter in the wood and the tiniest object decorating the background is plainly visible from a distance.

The glitz and glamor of the Golden Age shine with glorious splendor thanks to improved, right-on-the-money contrast and brightness balance. The 4K video displays dazzling and continuously crisp whites in the clothing and the many light fixtures on set while furnishing the exterior sequences with an attractive brilliance. Also, specular highlights show a notable and welcomed boost, looking tighter and narrower in the sunshine bouncing off faces while supplying the edges of vehicles and other metallic surfaces with a realistic, glistening polish and revealing slightly more details within the hottest spots. Inky rich, opulent blacks give Sharon's Porsche a stunning ebony polish, and there are outstanding gradational differences between the various shades in the clothing. The darkest, gloomiest shadows providing the 2.39:1 image with a lovely three-dimensional, cinematic appeal and excellent detailing.

The show continues its spectacular drama with a spirited array of colors, awarding Robert Richardson's heavily-stylized earth-tone cinematography with plenty of glitz and glamor. True to the photographic intentions of the filmmakers, the HDR10 presentation showers every scene and conversation with an attractive and warmly welcoming brown and yellow gloss, reflecting the city's desert climate. Sequences also shine in various tans, beiges, sepias and deep creams, from the stylish bohemian outfits to the furniture of the period, and interior sequences are bathed in soft marigold yellows honey-like oranges from the lights. And still, primaries come through with a mesmerizing richness, especially the sumptuously animated reds from clothing and cars to the neon lights of the city at night. (Video Rating: 94/100)

For this Ultra HD edition, the groovy retro visuals are upgraded to a sterling, marvelously satisfying DTS-HD Master Audio 7.1 soundtrack, but the addition of two more channels don't reveal much of a discernible difference from its 5.1 audio counterpart. With that said, the track is faithful to Tarantino's intentions, meaning this is not the sort to compete with blockbuster actioners but is sure to rock the house nonetheless with its collection of radio hits from 1969.

This is a very front-heavy presentation that feels like a traditional stereo design, subtly incorporating very refined sounds for setting a mood and creating a larger, realistic soundscape. In that respect, imaging continuously feels expansive with splendid, amazingly believable movement across the screen, exhibiting superb separation and clarity in the mid-range. While several discrete effects fluidly sweep across all three channels into the off-screen space to produce a wide sense of space, the music and song selections enjoy a great deal of warmth and fidelity, displaying squeaky-clean, sharp definition and marvelous differentiation between the various notes and instruments.

Being a heavy character-driven comedy-drama, a great deal of attention is understandably focused on the dialogue and conversations, delivering crisp and precise clarity at all times.  Low bass doesn't pack a memorable wallop and punch, but there is still plenty of impact in the few bits of action while the music delivers a more robust presence and weight. Rear activity is, for the most part, on the quieter side, reserved for a mild splattering of atmospherics sprinkled here and there with amusing effectiveness. It's not all that convincing, but it's enough to lightly extend the soundfield and provide a highly-engaging ambiance. In the end, the lossless mix supplies a substantial wall of sound that is immensely satisfying. (Audio Rating: 90/100)

The 4K Ultra HD of Once Upon a Time shares with its Blu-ray counterpart an amusingly enjoyable collection of additional scenes while the BD carries the load of supplements.

Quentin Tarantino's Once Upon a Time in Hollywood is a brazen, unabashed love letter to the Golden Age of Hollywood at the cusp of an impending film renaissance and a sudden shift in American culture. Using the unfortunate tragedy of Sharon Tate at the hands of Charles Manson's cult followers, the plot follows a former TV western star and his best-friend stuntman faced with the radical changes ahead while saturated in a tense sense of doom.

The glitz and glamor of Tinseltown premieres on 4K Ultra HD with a magnificently glamorous HDR10 presentation offering a welcomed upgrade over its Blu-ray counterpart and a marvelously satisfying DTS-HD Master Audio 7.1 soundtrack. Featuring a disappointingly small but nonetheless enjoyable set of supplements, the overall UHD package is highly recommended for Tarantino devotees and makes for a spectacular addition to the library.

Sale Price 15.49
List Price 30.99
Buy Now
3rd Party 13.99
In Stock.
See what people are saying about this story or others
See Comments in Forum
Previous Next
Pre-Orders
Tomorrow's latest releases