Like a candle in the wind… along comes a biopic about the lord of glam himself. Taron Egerton delves deep and comes up large as the singular pianist and pop-charts icon, Elton John. With Jamie Bell as his famous lyricist Bernie Taupin, Rocketman charts the course of Elton's rise from humble means to superstardom and his inability to cope with the spotlight. While the structure may not be a fit for everyone, it features terrific performances and Elton's classic catchy tunes. Paramount delivers a first-rate 4K Blu-ray for Rocketman with solid Dolby VIision HDR imagery and a rocking Dolby Atmos audio mix. If you love the music and the man, you'll dig the show. Recommended.

Stars rise from the ashes. Or in the case of Reginald Kenneth Dwight (Taron Egerton), humble beginnings. Very humble. A piano prodigy at a young age, Reginald grew up in a strict household under the thumb of his mother Sheila (Bryce Dallas Howard) and his often angry father Stanley (Steven Mackintosh). The only one in the family who supported and fostered his dreams to attend the Royal Academy of Music was his grandmother Ivy (Gemma Jones). Bucking what society and his family expects of him, Reginald will rise to become one of the most famous and infamous pop stars of a generation - Elton John. But his excessive lifestyle of sex and drugs may tear down everything he's built with his friend and lyricist Bernie Taupin (Jamie Bell). 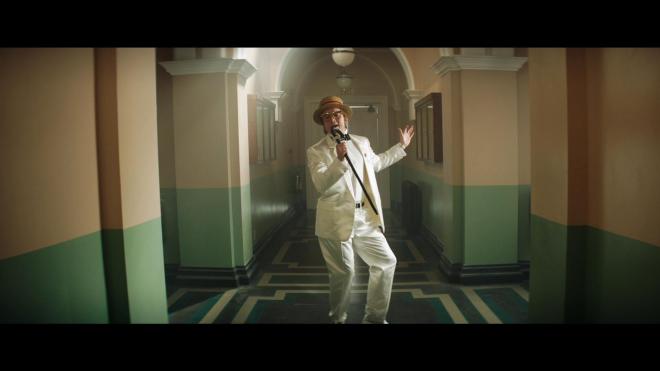 Honestly, I'm not much for biopics, as they tend to highlight accomplishments and expunge character flaws to make certain individuals look better in a historical light. I do like musicals -- The Music Man and Hello! Dolly are two of my favorites -- but I don't love the genre. I'm often put off when singing comes up out of nowhere and a long song replaces a simple easy conversation.

To that end, Rocketman was a bit of a dodgy prospect. On one hand, I like Elton John and his classic songs quite a bit. On the other hand, I didn't want to be sung at for two hours. As Rocketman opens with Elton bursting in on an addiction recovery meeting in full costume, I was intrigued where this could go. Then the first massive song and dance number broke out. And then the next one. And then young Reginald is in bed fantasizing about conducting a full orchestra that's playing rocketman.

I'm fine with song and dance numbers if there's a point to one being there when and where they happen. If it's just a means to cram in as many notable chart-topper tunes that everyone recognizes, I get a bit frustrated. I feel like story thrust and narrative progress are being subverted to have a showy moment. And I was frustrated with Rocketman - at first. While those song and dance bits that felt out of place and random took a little getting used to, I found my groove with the movie and appreciated the approach. Elton's' life and career were a series of highs and lows. Happiness and extreme depression. Sobriety and lucid to flat on his back having a heart attack and near death.

While I didn't instantly fall in love with Rocketman, I found my pace with it. I knew some of the bits and pieces going in. I knew he didn't come from money and had to scrap and scrape. I knew he had to make it on his own, but I didn't know how or when his big breaks and the important figures of his career intertwined with this life. So while it does follow some of the tried and true biopic beats, I appreciated that it didn't try to hide Elton's dark sides. It was actually refreshingly frank at times when he's dealing with bandmates, family, or even how he treated Bernie Taupin. It has glitz, but these moments don't revel in the glamor of a life gone wild. If you were less than enthralled by Bohemian Rhapsody but still hungry for more pop music history, give Rocketman a shot.

Rocketman rocks out on 4K UHD Blu-ray from Paramount Pictures in a two-disc 4K UHD + Blu-ray + Digital set. The discs are housed in a standard black two-disc case with identical slipcover artwork. Also included is a booklet containing a message from Elton John about the film. The disc loads to an animated main menu featuring traditional navigation options. As we publish this review, we aren't able to check the film's digital code, but historically Paramount digital copies unlock 4K viewing rights. 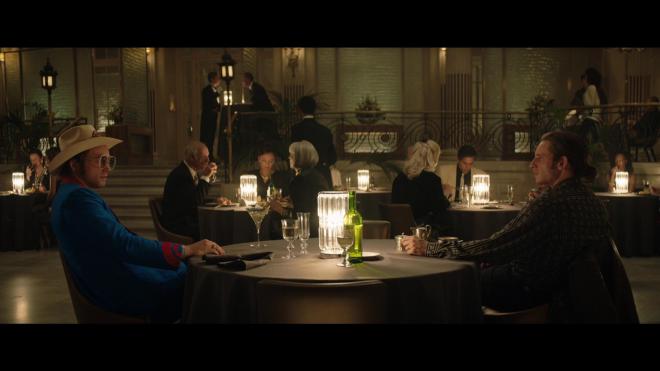 Rocketman splashes onto 4K Ultra HD Blu-ray with an upscaled 2160p 2.40:1 transfer. The film was apparently shot at 3.4k and finished on a 2K Digital Intermediate. On that front, I have to admit that some of the time the image is comparable to the 1080p SDR Blu-ray, but detailing features subtle refinements most may not see at first. Fine facial features, the production design of Elton's childhood home, and the incredible costumes get some extra notches of detail, but not a staggering night and day difference.

Where this image really comes to life is with the extra color range Dolby Vision affords. That first time we see Elton in his devil costume -- horns, wings, feathers and all -- it's a hell of a pop of rusty red/orange. Likewise, throughout the rest of the film, colors just leap off the screen with an incredible poppy presence. Primaries are robust and impressive while the rest of the color spectrum makes noteworthy gains. I particularly liked how later on when in the thick of fame and binging on drugs and booze, we get to see Elton's home life and all these colorful costumes cascade against the bright pristine whites of his mansion.

Blooming wasn't an issue on the 1080p SDR disc, but none the less, whites get a nice punch. Crispy without any aura or unintentional blooms, there is wonderful contrast in the color spectrum. When the show moves into Elton's physical and thematic downturn, blacks and shadows strengthen and become impressively enveloping without grunting the image into crush territory. While the details may not rise much higher than the standard Blu-ray, the Dolby Vision HDR push certainly edges this one over its counterpart for a perfectly splendid presentation. 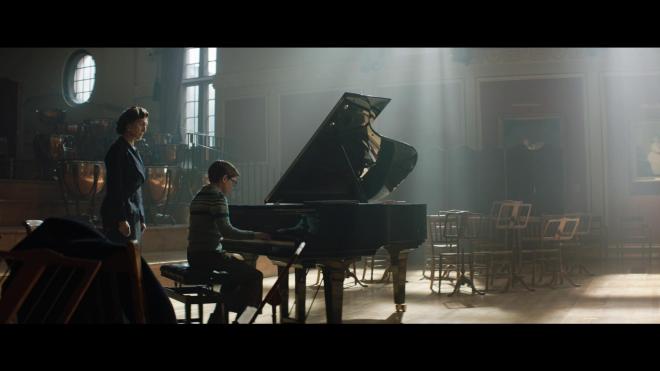 Holy hot momma, this is one hell of an effective Dolby Atmos mix! I love the juxtaposition from the quiet and easy-going conversational moments, where there is almost no sound, to the booming vibrant song and dance numbers. It's a bit of a whiplash, but that's the point. As a movie about Elton's extremes, the audio mix helps define that. The opening scene where Elton goes to addiction counseling is the perfect example. It's almost silent to the point that you wonder if you forgot to turn your audio setup on. And then the conversations build into a song that turns into a full-out choreographed dance number!

The film flows like that throughout making ample use of surround channels even if the cramped interior environment doesn't account for much need. There's always something to define space and presence whether it's someone walking by or someone having a barely inaudible side conversation. To that end, dialogue rolls along perfectly. Some of the East London accents may be a bit tight for some, but overall there's wonderful conversational clarity. Likewise when a song kicks in and various members of the cast chime in, voices carry over the scene nicely without feeling flat or dubbed in. Characters tend to sing as they move around the screen and there's enough movement in the channels to keep this mix lively and engaged. I think this was the first musical I saw with an Atmos mix and I'm pretty damned impressed with the results! 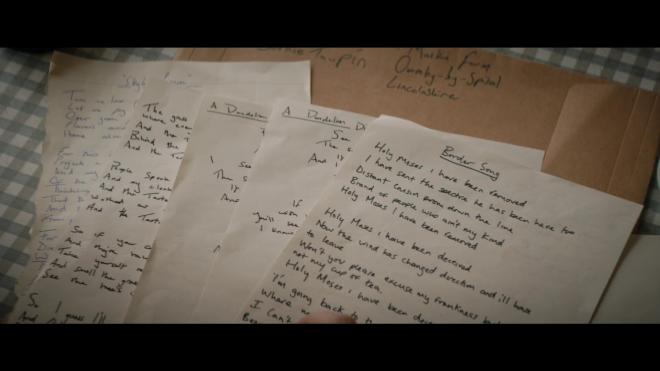 Rocketman comes loaded with some pretty decent bonus features! A lot of it is typical EPK stuff, but the content is pretty good. There's a lot to pick through here and should keep you occupied for a bit - especially if you're a fan of the man and the movie. All bonus features are found on the included SDR Blu-ray disc. 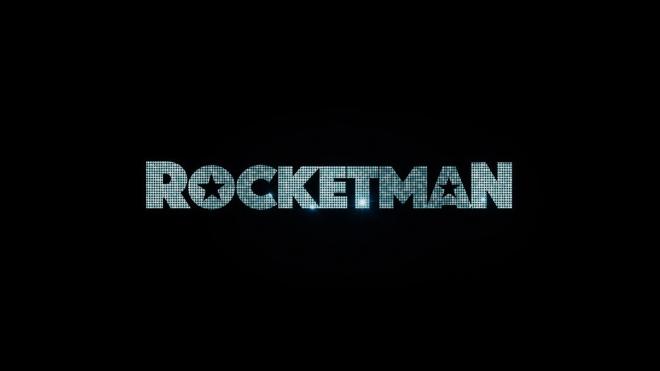 I may not love biopics, and I certainly don't enjoy most musicals, but Rocketman worked. It was solid entertainment with some of Elton John's best tunes and terrific performances. It's not my favorite movie of the year, but it's good enough at what it does that I wouldn't dissuade anyone from watching it. Especially if you're an Elton fan - you'll want to check this out. Paramount Pictures delivers Rocketman to 4K UHD Blu-ray with a great Dolby Vision presentation and a solid Atmos mix. Toss in some worthwhile bonus features and you have yourself a disc worth adding to the collection. Recommended.

Sale Price 25.99
Buy Now
3rd Party 5.92
In Stock.
See what people are saying about this story or others
See Comments in Forum
Previous Next
Pre-Orders
Tomorrow's latest releases