The Spierig Brothers imagine a bleak vision of humanity at the hands of vampires taking over the world in Daybreakers, one of the most enjoyable and original tales about bloodsuckers in recent memory. The fantasy-horror movie takes a bite out of 4K Ultra HD with an average Dolby Vision HDR presentation, a better Dolby Atmos soundtrack, and the same collection of bonus material as before. Worth a Look.

It's funny sometimes revisiting the predictions of a dystopian future in older movies from the year in which the civilization was foretold to be in complete ruin, utter chaos or suffering from extreme oppression. Now living in 2019, Ridley Scott's sci-fi classic Blade Runner is a prime example, but I also enjoy the Spierig Brothers' Daybreakers where the sibling filmmakers imagined the human race at the brink of extinction because the world has been overrun by vampires.

At the heart of this cool concept is the vampire society realizing their survival as a species is predicated on the survival of the other — the extinction of one spells doom for the other, emblematic of contemporary environmental issues. Ethan Hawke stars as a scientist charged with inventing a blood substitute as a way of prolonging the inevitable, but secretly, he wants a cure for the vampire disease, which he finds in Willem Dafoe. A more fascinating aspect of this dark, bleak vision is vampirism serving as an allegory for corporate greed, the wealthy elite and capitalism run amok, of excess consumption and the exploitation of natural resources, as represented by the smug, self-important Bromley (Sam Neill).

Of course, Spierig's predictions of a vampire-ruled future failed to come true, but the plot's more subversive, underlying ideas remain just as relevant today, making for a fun watch. 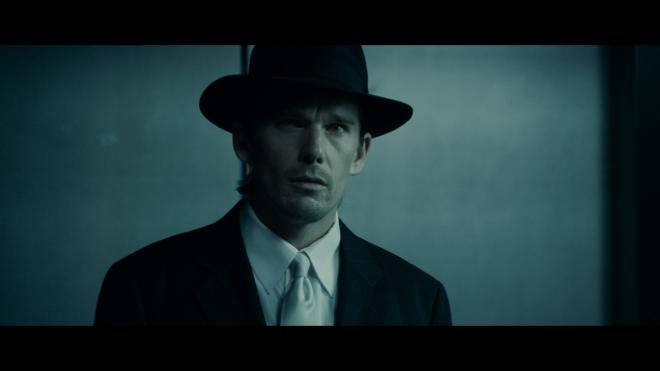 For a more in-depth take on the film, check out Tom Landy's review of the 2010 Blu-ray HERE.

Lionsgate Home Entertainment brings Daybreakers to 4K Ultra HD Blu-ray as a two-disc combo pack with a flyer for a Digital Copy. The code can be redeemed via moviesredeem.com or through VUDU but only the 1080p HD version with legacy Dolby Digital Plus 5.1 audio. The triple-layered UHD100 disc sits comfortably opposite the same Region A locked, BD50 disc as the 2010 release. Both discs come inside a black, eco-cutout case with a glossy slipcover. At startup, the disc goes straight to the usual menu screen with full-motion clips and music playing in the background. 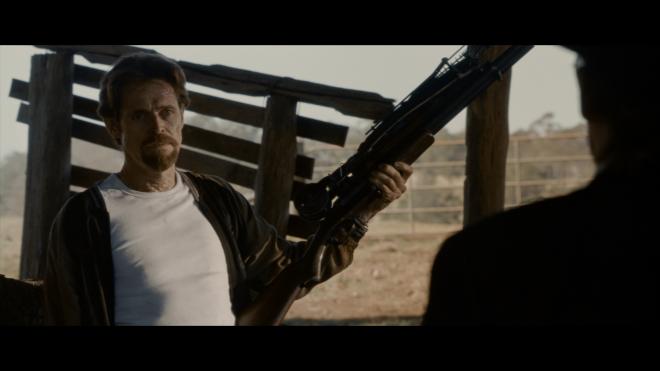 The race for the cure battles the undead on Ultra HD equipped with an average and somewhat-disappointing HEVC H.265 encode, looking fairly similar to its Blu-ray predecessor.

Shot on a combination of traditional 35mm film and 1080p HD cameras, which were later mastered to a 2K digital intermediate, the source significantly limits the potential for a noteworthy upgrade. Resolution levels observably waver between the sterile softness of the HD elements and the gritty, grainy appeal of analog photography, the latter of which shows sharper definition of background information and stronger textural details in the facial complexions and in the makeup effects of the feral bat-like creatures. Nevertheless, several sequences are noticeably blurry and poorly resolved, most apparent in wide shots and the somewhat dated CG imagery. There are also a few instances of aliasing along the buildings.

Furthermore, Ben Nott's heavily-stylized cinematography complicates matters with contrast and brightness balance that doesn't benefit considerably from the advantages of the format. Granted, whites enjoy a small boost and generally look a little cleaner, and black levels are a tad richer with inkier shadows. However, they nonetheless remain comparatively similar to its HD peer while displaying a smidge of posterization around the hottest spots and some mild crush in the clothing and the darkest, murkiest corners. Specular highlights, on the other hand, receive the more appreciable improvement, showing a tight, crisp glow with better detailing in various light fixtures, headlights, fiery flames and in the daylight sequences. Still, this tends to fluctuate depending on the scene and the quality of the CG effects.

Likewise, the overall color gamut is also greatly affected by the filmmakers' aesthetic choice, which looks all the more metalized and monochromatic than its HD SDR counterpart. On the one hand, the Dolby Vision HDR presentation noticeably enhances and amplifies the orange-and-teal palette to the point of excessive, engulfing practically the entirety of the movie in a greenish hue at night while daylight sequences are bathed in polished marigolds and warm ambers. This not only significantly skews the primaries, which show little to almost no improvement yet greens benefit every so slightly, but all other secondary hues are greatly limited to browns, yellows, and fiery-golden oranges.

All in all, the upscaled 4K transfer doesn't quite deliver the sort of HDR upgrades we've come to expect or appreciate from the format. (Dolby Vision Video Rating: 64/100) 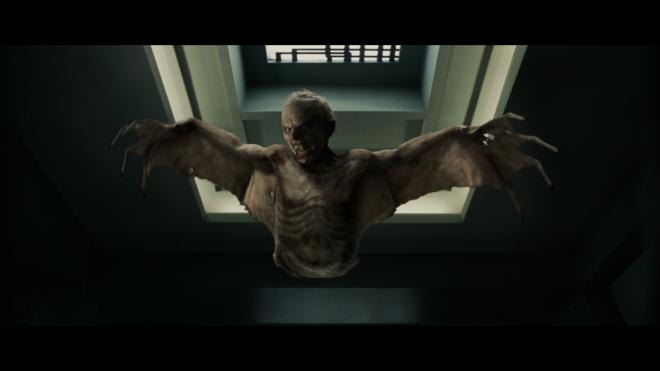 Vampires take over the world of Ultra HD with a generally satisfying and excellent Dolby Atmos soundtrack. It may not push its DTS-HD Master Audio counterpart to the brink of extinction, but the jump into the daylight burns with a few gains to make this an enjoyable listen.

Most atmospherics employ the sides and rears fairly often with effective directionality and placement, creating an engaging soundfield. Action sequences expectedly provide an immersive experience while quieter, dialogue-driven scenes largely go silent. Occasionally, some visuals effects nicely expand the environ into the ceiling channels, like helicopters panning across the fronts or announcements echoing overhead, but such moments are far and few in between and never generate a convincing hemispheric soundscape.

More attention is placed in the fronts where a variety of background activity bounces across the screen and bleeds into the top heights, delivering a slightly broader and spacious soundstage. This is especially true of Christopher Gordon's understated but nonetheless haunting score, displaying a great deal of warmth and acoustical detailing. Imaging exhibits extensive distinction and clarity in the mid-range while dialogue-production is well-prioritized and intelligible during the loudest segments. Low-frequency effects are not particularly commanding or noteworthy, but the bass is nonetheless throaty with a palpable weight to adequately complement the visuals. (Dolby Atmos Audio Rating: 84/100) 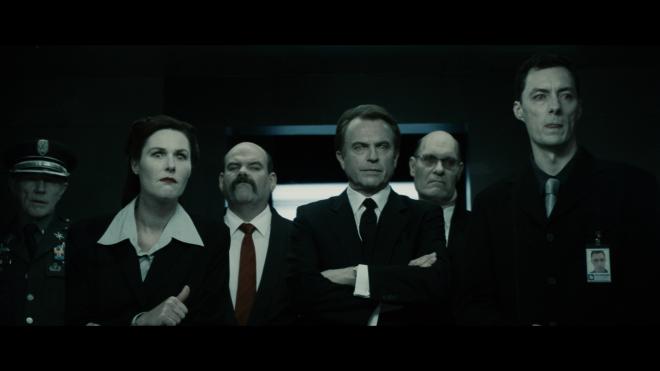 Lionsgate ports over the same collection of bonuses as the 2010 Blu-ray release and are available on the Ultra HD disc. 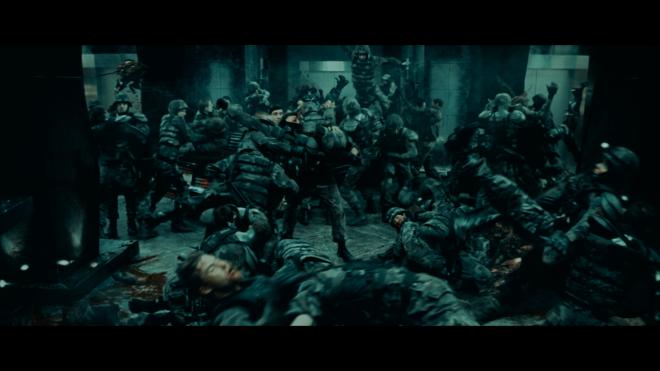 The world is a vampire in the Spierig Brothers' Daybreakers, a bleak vision of humanity at the brink of extinction caused a pandemic the turns people into ferocious bloodsuckers. Starring Ethan Hawke, Willem Dafoe and Sam Neill, the sibling filmmakers use vampirism as an allegory for corporate greed and the exploitation of natural resources, making for a fascinating watch and one of the most original tales of the undead. The fantasy-horror movie takes a bite out of 4K Ultra HD with an average Dolby Vision HDR presentation, providing only a few minor tweaks over its Blu-ray counterpart, and a great Dolby Atmos soundtrack. Featuring the same set of supplements, the overall UHD package is nonetheless worth a look.

Sale Price 16.89
List Price 22.99
Buy Now
3rd Party 16.89
In Stock.
See what people are saying about this story or others
See Comments in Forum
Previous Next
Pre-Orders
Tomorrow's latest releases