Writer-producer-director Simon Kinberg once again fails to give the celebrated comic series cinematic justice in Dark Phoenix, in spite of the excellent performances and spectacular visuals. The saga rises to Ultra HD with a gorgeous 4K HDR10 presentation, a reference-quality Dolby Atmos soundtrack, and a disappointing collection of bonuses. Nevertheless, the overall UHD package is Recommended over the Blu-ray version.

Three viewings and a couple days later, I am still not entirely sure what to think of Dark Phoenix, the fourth installment in the rebooted X-Men franchise. The movie comes with several positives worth noting and admiring, but it comes with just as many, if not more, negatives. I kept finding myself enthralled and mesmerized by the action-packed visuals one minute but rolling my eyes and even being frustrated by the story and some of the conversations the next. Perhaps, part of my disappointment has something to do with the source material, as this is the second time studios have attempted to adapt the "The Dark Phoenix Saga" and failed again to do it cinematic justice. But the bigger and arguably, more pertinent problem is the filmmakers themselves and their misunderstanding of the storyline, as in, they're missing the central point of Jean Grey's tragic evolution into the Phoenix.

Thirteen years later after penning the disastrous X-Men: The Last Stand and sorely maddening Marvel fans everywhere, screenwriter Simon Kinberg returns to the celebrated limited comic series as producer while also making his directorial debut. In the eyes of moviegoers, he has largely redeemed himself with First Class and Days of Future Past but then, disheartening them once again with Apocalypse. And now, this complete miscalculation, as though desiring to rectify past blunders with even more blunders, making it a challenge to decide which of the two adaptations is the better or worse. It would make for an interesting debate, to say the least since Kinberg appears to have a good eye behind the camera, inflating the screen with captivating spectacle. From Magneto's (Michael Fassbender) Genosha island to the spectacular train attack, the movie would otherwise make for a satisfying actioner. 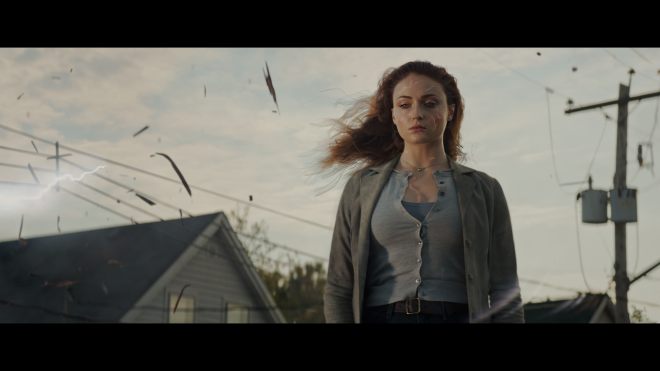 However, the Phoenix story is not about the action. Or Magneto. Or Beast (Nicholas Hoult). And it is especially not about Professor Xavier (James McAvoy). It's about Jean Grey (Sophie Turner), her dramatic journey of wrestling with powerful emotions she doesn't feel in control of and her struggle for redemption, which is what we're led to believe from the start of a traumatic car accident and when Jean is struck by a mysterious cosmic energy. Instead, Kinberg's new interpretation becomes more about the men around her and their response to the aftermath of Grey's destructive behavior than it is about one of the most powerful beings in the Marvel Universe coming into her own. Most of the plot's emotional weight shifts to Magneto and Beast retaliating to the damage caused by Phoenix, and as details of Xavier's ethically-questionable behavior come to light, the journey to be absolved of past sins is given to him over Grey.

At the same time, Dark Phoenix ideally should have been an opportunity for Turner to demonstrate her dramatic chops, a chance for the young actress to move past her Game of Thrones fame, and she is fantastic in the role. Likewise, McAvoy, Fassbender, and Hoult give wonderful performances, but it's all for nothing in a story that can't decide on a central protagonist, swiftly jumping between each character without giving audiences an opportunity to sympathize with any of them. Meanwhile, the series' arguably biggest star, Jennifer Lawrence as the reformed Mystique, ambles through her scenes as though completely bored to tears and looking for a way out. And in some ways, this big-budgeted production is a way out seeing as how this is 20th Century Fox's last X-Men feature, the studio's final hurrah with the series before handing the creative reins to Disney and Marvel. Unfortunately, Kinberg and his team have repeated the same disappointing conclusion to what was an otherwise strong franchise.

20th Century Fox Home Entertainment brings X-Men: Dark Phoenix to Ultra HD Blu-ray as a two-disc combo pack with a flyer for a Digital Copy, which can be redeemed via FoxDigitalMovies.com or Movies Anywhere, unlocking the 4K HDR10 version with Dolby Digital Plus 5.1 audio. The dual-layered UHD66 disc sits comfortably opposite a Region Free, BD50 disc inside a black, eco-cutout keepcase. At startup, the UHD goes straight to the main menu screen with full-motion clips, the usual options along the bottom and music playing in the background. 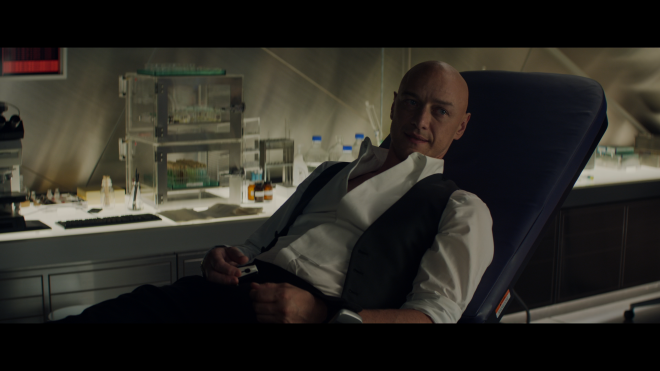 The Phoenix takes flight on Ultra HD with a gorgeous and elegant HEVC H.265 encode that surprisingly rises above the Blu-ray and even surpasses it in several areas. The biggest and most noteworthy improvement is the contrast and brightness balance, which is where the 1080p HD version faltered somewhat.

Black levels are significantly richer and inkier with excellent gradational differences between the various shades. The HDR10+ presentation showers daytime interiors in silky shadows, and visibility in poorly-lit interiors of the X-manor is outstanding. Better still, the pitch-black darkness of space or at night penetrates deep into the screen, providing the 2.39:1 image with appreciable dimensionality and a lovely cinematic quality. The boost in contrast is more subtle, but whites are nonetheless crisper and more vivid, allowing for outstanding clarity in the distance and dynamic pop in the daylight sequences. Likewise, specular highlights are a tad more intense with a better, narrower glow from light fixtures, the gleam of sunshine off metallic surfaces, in Storm's thunderbolts and in Phoenix's super-psychedelic light show.

Speaking of which, Mauro Fiore's cinematography also benefits with a brighter, more spirited palette, showering many scenes with lively, richly-saturated primaries. Reds, in particular, are fuller and of a deeper scarlet shade, such as Mystique's ruby hair, and blues are energetic, from the dark admiral of the X-Uniforms and Storm's arctic cerulean lightning bolts to the cobalt skin of Beast and the indigo tones of Mystique. Jean Grey's temper-tantrums ignite the screen with an eye-dazzling spectacle of radiant lavenders, flamboyant hot pinks and little bursts of passionate violets. Explosions and Phoenix's fire flares come with an enthusiastic mixture of blissful oranges, fiery reds, and deep golden yellows.

Shot on the Arri Alexa camera system, capable of up to 3.4K resolution but was mastered in 2K digital intermediate, the upscaled transfer also shows a slight uptick in overall definition, exposing a bit more in the thick stitching and threading of the uniforms and other clothing. Admittedly, it's not a significant jump over HD SDR counterpart, but this 4K video arrives with stronger, noticeably sharper lines in the buildings, roads and surrounding foliage of Genosha. Viewers can plainly make out the small objects and gadgets decorating the background of the manor, and facial complexions are highly-revealing, exposing the pores, wrinkles and negligible blemishes with lifelike textures. A couple of scenes here and there can look a tad softer than others and a few instances of very mild aliasing rears its ugly head, but on the whole, the 4K HDR presentation is sharp with plenty to admire. (HDR10 Video Rating: 92/100) 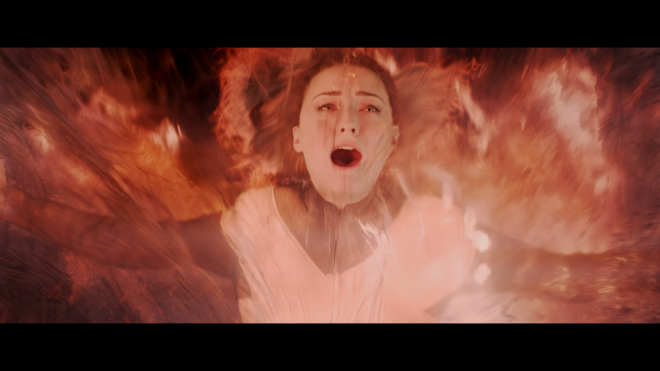 The Phoenix Force rises and soars above its DTS-HD MA counterpart with a more impressive, reference-quality Dolby Atmos soundtrack, adding a small layer of enjoyment to an otherwise plodding movie.

Almost from the start, the surrounds and ceiling channels come alive with marvelous directionality and bustling motion, as the ear-piercing explosion of either the shuttle blast or the X-Jet reverberates and fills the entire room. In fact, these moments are pretty much guaranteed to push subwoofers to their limits since the lower frequencies dig into the ultra-low depths at high decibels and with a palpable, room-energizing presence, sending some really cool couch-shaking shockwaves through the room (bass chart). The noise also spreads evenly across the screen and into the top heights with excellent channel balance, creating a broad and expansive half-dome soundstage that's consistent. Dynamic range is extensive with outstanding clarity and distinction in the upper frequencies, and vocals are precise and well-prioritized even during the loudest, most chaotic moments.

One of the more appreciable improvements in this object-based design is rear activity employed more frequently to better complement the visuals, such as when the kids are celebrating outside the manor and Dazzler's energy beams float all around the listening area. The best moments, of course, are when the action erupts on screen, be it the drifting flares of the cosmic energy moving across all the speakers or the vibrating echoes of various flying aircraft. Helicopters are heard in the distance and panning overhead, debris scatters everywhere and showers down from above, Phoenix's energy flames swish and thrash in the ceiling and sides, and individual raindrops fall directly from above the listening area. Other atmospherics keep viewers engaged, most notably the train sequence as clashing metal bangs and chimes from all directions, generating a very satisfying hemispheric soundfield. (Dolby Atmos Audio Rating: 96/100) 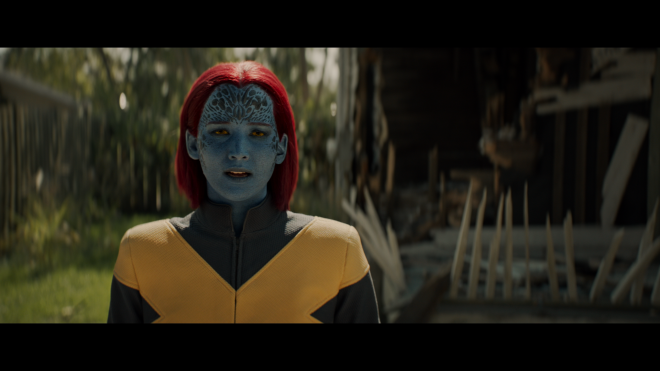 Except for the commentary track, all supplemental material is only available on the accompanying Blu-ray disc. 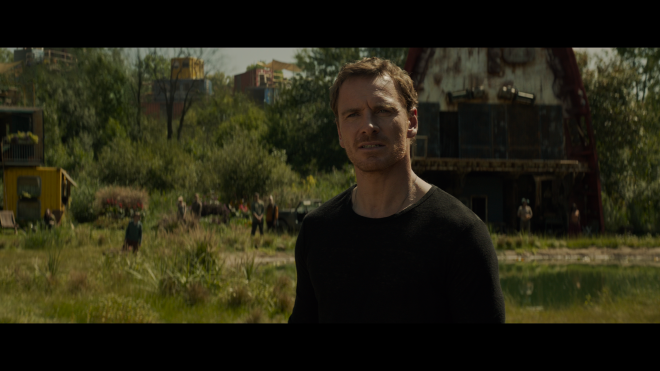 After writing the disappointing X-Men: The Last Stand, long-time franchise producer Simon Kinberg returns to the same story for Dark Phoenix in his directorial debut only to blunder it once again. Despite excellent performances from the entire cast and some admittedly mesmerizing visuals, Jean Grey's tragic evolution into the Phoenix is ultimately a dull, tired trek with some problematic misunderstandings of its source material. The saga rises to Ultra HD with a gorgeous 4K HDR10 presentation and a reference-quality Dolby Atmos soundtrack that soars far above and improves on its Blu-ray counterpart. With a small, somewhat disappointing collection of bonuses, the overall package is nonetheless recommended on UHD.