With an ensemble cast of fearless house pets, The Secret Life of Pets 2 returns with more zany misadventures and a surprisingly fun continuation balancing hairier aspects with lots of laughs. The CG-animated follow-up hides its secrets on 4K Ultra HD with a reference-quality Dolby Vision HDR presentation, a satisfying Dolby Atmos soundtrack and a healthy collection of supplements. The overall UHD package is Highly Recommended for the whole family.

Picking up a few years after the events of the first movie, The Secret Life of Pets 2 carefully toes the line between adult humor and innocent, child-like zaniness. It's clear the filmmakers are quite cautious of where the jokes and visuals could potentially stumble into more mature territory, be it for laughs or mild scares. When secretly tough Gidget (Jenny Slate) seeks Chloe's (Lake Bell) help in feline mannerisms, the obese tabby cat is caught in a catnip delirium while wearing a lampshade and grooving to Jefferson Airplane's "White Rabbit." For kids, the otherwise indifferent and apathetic furball acting the intoxicated fool is sure to leave them in stitches. For parents, however, the gag hopefully flies over their heads but remains a silly innuendo for older viewers without overstaying its welcome. This careful balancing act of acceptability is ultimately what makes this sequel a surprisingly good follow-up from a talented crew who successfully entertains children as much as adults.

These same filmmakers also apply their tightrope talents to an engaging story that juggles three subplots, which ultimately meet at the end for a satisfying conclusion. While Gidget infiltrates a dark, creepy cat haven to rescue a chew toy, Max (Patton Oswalt) and Duke (Eric Stonestreet) must cope with their growing family when their owner Katie (Ellie Kemper) marries Chuck (Pete Holmes) and the newlyweds have a child. Once the begrudging Max succumbs to the toddler's adorable charms, the Jack Russell Terrier discovers his overly vigilant paternal side that quickly develops into an anxious fear. Eventually, he's shepherded into mastering it when meeting the courageous and gallant Rooster (Harrison Ford). For the little pups in the family, this detour into the open range and wild country will have them howling at the moon while the deeper wisdom expressed by Ford's bandana-wearing sheepdog should hit pretty close to home for mom and dad. 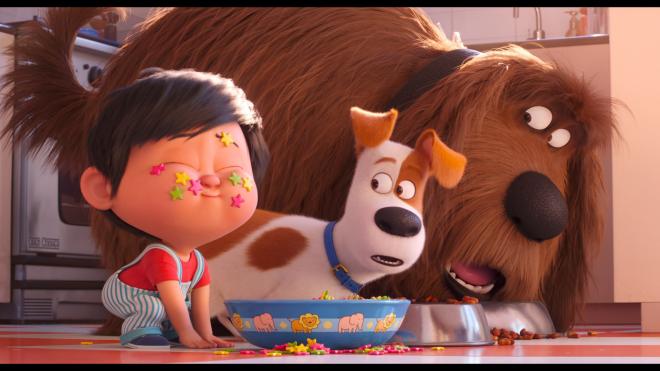 At the same time, Snowball (Kevin Hart), who went from resentful antagonist to a cuddly, pampered pet in the first movie, now imagines himself a superhero thanks to his equally passionate owner. Dressed in a flamboyant, tight-fitting outfit making him look more like a luchador than a costumed vigilante, Hart's fluffy white bunny is arguably the cutest and funniest aspect in this CG-animated sequel with the 2D cartoon sequence of his imaginary aspirations being a hilarious highlight. When Daisy (Tiffany Haddish) provides the opportunity to truly test his heroism and mettle, the story takes an interesting and very expected turn, but in a good way. Snowball is asked to rescue a visibly frightened and abused white tiger cub held captive by the brutally cruel circus owner Sergei (Nick Kroll). Compared to Max overcoming his fears and Gidget becoming the queen of the cats, this is perhaps the story's darkest leap, touching on animal cruelty and the ethics of wild creatures in captivity.

However, the filmmakers impressively manage to keep these more troubling aspects on the lighter comedic side, balancing the seriousness with plenty of belly laughs. And The Secret Life of Pets 2 is all the more admirable as all three subplots finally merge without hiccup into an action-packed finale. Brian Lynch's (Minions, Puss in Boots) script follows Max, Gidget and Snowball as they discover their inner heroism, that each is capable of bravery in the face of unknown dangers, a clowder of scary cats or a creepy, Boris Karloff-like circus owner. In the capable hands of Chris Renaud, the director of the Despicable Me films and The Lorax, our trio of heroes are a delight in their misadventures although Snowball's mission is the memorable standout and the critter who ultimately steals the show.

Universal Studios Home Entertainment brings The Secret Life of Pets 2 to 4K Ultra HD Blu-ray as a two-disc combo pack with a Digital Copy code. When redeeming said code via Universal's website or Movies Anywhere, users have access to the 4K Dolby Vision version with Dolby Digital Plus 5.1 audio. The triple-layered UHD100 disc sits comfortably opposite a Region Free, BD50 disc inside a black, eco-elite case with a glossy slipcover. At startup, the disc goes straight to a static screen with the usual options along the left side and music.

Secret identities, fears and side adventures are exposed on Ultra HD thanks to a stunningly magnificent, reference-quality HEVC H.265 encode.

Right from the opening moments of the Manhattan neighborhood, the Dolby Vision HDR presentation mesmerizes and intoxicates with a lavishly bold parade of sumptuously rich primaries. Reds, in particular, are dramatic and flamboyant, and the foliage jumps with lively, energetic greens while blues range from lovely cerulean skies and cobalt shades in the clothing to deep indigoes at night. The picture is also continuously bathed in a plethora of animated, spirited secondary hues, from the lush fuschia and cotton candy pinks of the afternoon sky and Molly's bedroom to a dynamic array of violets, deep purples, vivid browns, vibrant canary yellows and warm fiery oranges. The constant showering of colors keeps the scarier, more alarming moments with Sergei or the cat lady's apartment upbeat and light-hearted.

Compared to the day-and-date Blu-ray version, the freshly-minted 2160p transfer, likely struck from a 2K digital source, also displays surprisingly sharper visuals, from every piece of furniture and the tiniest trinket decorating the apartment to each window, brick and cloud in the distance. Viewers can plainly make out the bumps of the dogs' noses, the crusty rust spots of Rooster's vintage-truck dog home and the smallest blemish in Max's bee toy while every blade of grass and leaf is striking, and the individual hairs of every animal are highly detailed. Perhaps most shocking is clearly seeing the texture and fabric in the clothing and Snowball's superhero costume. There are a couple moments where the sharpest, distinct edges waver and shimmer just a tad, but overall, the video offers a remarkably better and more well-defined picture.

The 4K video continues delivering a feast for the eyes by flaunting about in improved contrast and brightness balance. Pitch-perfect whites are more brilliant and notably snappier, allowing for incredible visibility of the tiniest objects in the distance and for stunning clarity in each individual hair on Gidget, Snowball and Hu. Specular highlights are more resplendent, radiating with luminous intensity and narrow crispiness in the light fixtures and the sunshine glistening in the water. Black levels are richer and silkier with extraordinary gradational differences in the various shades, such as the elaborate features in Sergei's outfit and his pet monkey, and the darkest, creepiest corners of the cat lady's apartment maintaining outstanding detailing, providing the 1.85:1 image with impressive three-dimensional quality. (Dolby Vision Video Rating: 98/100)

The pets set out on a brave rescue mission equipped with a fantastically fun and highly satisfying Dolby Atmos soundtrack, filling the room with the hustle and bustle of the city while the scenes set on the family farm are often layered with the subtle noise of the local wildlife.

The design displays excellent directionality and placement, as various atmospherics travel through the surrounds and into the ceiling speakers with flawless panning. It's not always consistent or as effectively immersive as some of the best tracks currently available, but for a children's animated feature, the effects employ the overheads from time to time, generating an amusing soundfield that terrifically complements the visuals. The best moments are the scenes with Gidget inside the cat lady's apartment and when the gang battles Sergei and his wolves aboard the train.

Much like its predecessor, the majority of the action is better and more effectively spread across the screen, as background activity smoothly moves between the front and height channels, creating an engaging half-dome soundstage. Imaging continuously feels spacious and expansive, exhibiting outstanding clarity and detailing in the mid-range. The low-end provides a welcomed punch and presence, serving the action well without being too demanding. With well-prioritized and precise vocals throughout, the object-based mix makes for a great listen. (Dolby Atmos Audio Rating: 88/100)

The sequel finds life on Ultra HD with the same assortment of bonus features as its day-and-date Blu-ray counterpart, but they're all pretty short and make for a quick watch.

The Secret Life of Pets 2 returns with more zany misadventures of Manhattan dogs, cats and bunnies as they discover their inner hero on a farm, in a cat lady's apartment and against a creepy circus owner. With an ensemble of talented actors, the sequel is a surprisingly fun  continuation that nicely balances some of the graver, more somber aspects with lots of laughs. The CG-animated follow-up hides its secrets on 4K Ultra HD with a stunning, reference-quality Dolby Vision HDR presentation showing a notable upgrade over the Blu-ray and the same satisfying Dolby Atmos soundtrack. With a healthy collection of supplements to entertain the whole family, the overall UHD package is highly recommended.

Sale Price 13.99
List Price 22.98
Buy Now
3rd Party 6.25
In Stock.
See what people are saying about this story or others
See Comments in Forum
Previous Next
Pre-Orders
Tomorrow's latest releases