Full of catastrophic spectacle, mesmerizing visuals and mindless monster-fighting fun, Michael Dougherty's Godzilla: King of the Monsters is a surprisingly fun sequel that feels right at home with the original Toho franchise. The Titans reign supreme on 4K Ultra HD with a gorgeous Dolby Vision HDR presentation, a reference-quality Dolby Atmos soundtrack and the same set of bonuses. The UHD package is Highly Recommended for kaiju action fans.

Nobody walks into a Godzilla movie expecting cinematic genius, the sort of high-quality, artsy-fartsy caliber only shown in small arthouse theaters. Starting with Ishiro Honda's 1954 classic, the massive franchise numbering thirty-five movies in total has always been an unabashed spectacle of fantastical curiosities, an imaginative parade of outlandish creatures and a visual extravaganza of the complete, utter destruction of cities. Granted, there is a well-known and much-discussed allegorical element to Honda's film. But audiences keep returning to these movies knowingly expecting to be wowed by the sight of colossal monsters duking it out, and Godzilla: King of the Monsters delivers precisely that to satisfying effect. All the while, it surprisingly feels more like a traditional Godzilla entry than Gareth Edwards's 2014 take on the franchise. To be fair, the American reboot is an enjoyable disaster popcorn flick, but this direct follow-up better captures the spirit of Toho's original series.

The story, which was co-written by director Michael Dougherty (Trick 'r Treat, Krampus), picks up five years after the events of its predecessor and quickly recaps a world still reeling in the aftermath. Governments are still working on adjusting to the knowledge that mountain-size monsters exist, which have been fittingly dubbed "Titans" — a hearing scene that is good at situating the Monarch organization at the center of what's to ensue but also a ham-fisted, eye-rolling attempt for establishing the MonsterVerse with the mention of King Kong. Still, Dougherty and his team summarize these story points hastily and rather efficiently because they know we're only here the kaiju mayhem. The plot is only in the service of the catastrophic visuals. And Vera Farmiga's Dr. Emma Russell graciously becomes the catalyst for the planet's annihilation when her "Orca" device is used to control the behavior of the Titans, such as Mothra, and more specifically, to awaken the most ferocious of the monsters: Ghidorah. 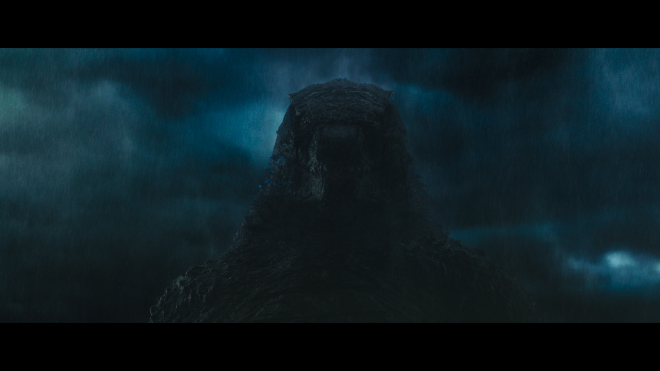 Frankly, seeing these superstars of classic creature-features brought to life on the silver screen took me back to my childhood, that giddy little boy sitting in front of his tube TV Saturday afternoons and relishing the weird Japanese horror movies of the 1960s and 70s. Needless to say, I watched the initial battle between Godzilla and Ghidorah wide-eyed and with a massive smile imprinted across my face, my ears tingling as their distinctive roars blasted through the sound system. To give the story a bit of gravitas, we follow Dr. Mark Russell (an always satisfying Kyle Chandler) joining with Monarch scientist Dr. Serizawa (Ken Watanabe). Along with a host of characters, they make every attempt to stop eco-terrorist Alan Jonah (Charles Dance) from completing his deluded plans of saving the planet and restoring the natural order, à la the Thanos method. However, as the relatable hero of this fanciful tale, Mark's motives are more honorable: saving his daughter Madison (Millie Bobby Brown).

It's ridiculously simple and straightforward, to be sure, but we don't want complicated in a high-concept, mindless popcorn feature about giant monsters fighting and wreaking havoc around the globe. Admittedly, Godzilla: King of the Monsters comes with some issues that keep it from reigning supreme, such as the forced set-up for a showdown between two iconic giant monsters: a titanic gorilla versus a prehistoric amphibious reptile. Sure, I am giddy with joy at this happening next year, but the filmmakers ineptly shove it into this story to the point of near annoyance. The attempts at humor, likewise, are horrendously bad. Bradley Whitford and Thomas Middleditch are usually good for a laugh or two, but here, the jokes fall flat and make their performances more irritating than charming. The production's saving grace is the many allusions and homages to the classic Toho series, starting with the title as a reference to the 1956 sequel which initially introduced moviegoers to Godzilla. But the moment that gave me chills was hearing Akira Ifukube's signature musical motif as Godzilla rose from the watery depths — a moment, I'm sure, fans unitedly smiled and felt satisfied with this sequel.

Warner Home Video brings Godzilla: King of the Monsters to Ultra HD Blu-ray as a two-disc combo pack with a flyer for a Digital Copy. When redeeming said code via WB.com and Movies Anywhere, users unlock the 4K UHD version in Dolby Vision HDR with Dolby Atmos. The triple-layered UHD100 disc sits comfortably opposite a Region Free, BD50 disc, and both are housed inside a black, eco-cutout case with a shiny slipcover. At startup, viewers are taken to a static screen with the usual options along the bottom and music playing in the background. 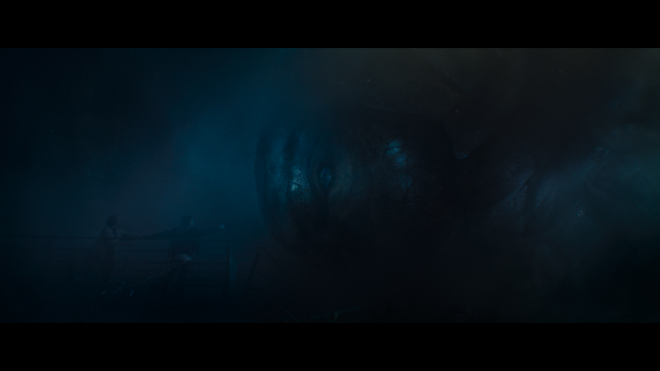 The king of the monsters reigns supreme on Ultra HD with an exceptional, often-mesmerizing HEVC H.265 encode, struck from a 2K digital intermediate, which was itself sourced from a combination of Arri Alexa cameras capable of 3.4K and 6.5K resolutions.

Right from the start, the orange-and-teal palette appears to benefit the most, looking significantly richer and fuller than its HD SDR counterpart. The Dolby Vision HDR presentation is continuously bathed in a sumptuous spectrum of blues, from a deep navy in the clothes, electrifying cobalt of computer monitors to dark scenes engulfed in a vibrant blue aura and Godzilla's dorsal plates glowing an icy arctic shade. Likewise, greens and reds are more lively and animated, as seen in computer monitors and the glow of lights. The heavily-stylized cinematography of Lawrence Sher balances the spectacle with a captivating mix of secondary hues, most notably the warm oranges ranging from the tiger tangerines in the emergency lights, the fiery marigold hues of explosions and the dramatic lemon yellows of Ghidorah's fire blasts. This display culminates in a feast for the eyes during the demo-worthy Mexico scenes.

The 4K video continues its rampage with notably improved contrast and balance, brightening up the action somewhat but also looking noticeably darker overall than the Blu-ray. Although not immediately apparent given Sher's creative photography, the boost in contrast delivers crisper, cleaner whites, giving the center of lights, monstrous explosions and Mothra's glow a more intense luminosity. The same goes for the specular highlights where the difference is a bit more nuanced but the upgrade nonetheless appreciable. The brightest, hottest spots, such as computer monitors, the edge of clouds, picturesque sunsets, Rodan's ember-riddled body and the monsters' radioactive glow, are tighter with a narrower brilliance that allows for better detailing. The most noteworthy moment demonstrating this is Godzilla rising from his lair and shooting an atomic ray into the sky where we can plainly make out the individual dorsal plates.

At the same time, black levels are richer and inkier with incredible gradational differences between the various shades, allowing for excellent visibility within the darkest, velvety shadows. Granted, the filmmakers' aesthetic look can make a few moments seem rather murky and dreary, but it's nothing too egregious as the action remains spectacular and bathed in silky, raven blacks, providing the 2.40:1 image with a beautiful, larger-than-life cinematic appeal. The same can be said of the overall definition and clarity where again, the CG action is continuously layered in a smoky, hazy and dark grey look, making for several blurry-looking shots. Nevertheless, the upscaled transfer still enjoys a welcomed uptick, showing every bead of sweat and water rolling down the casts' faces along with every scale, muscle tissue and battle scar of the monsters. Fine lines and stitching are sharper and a tad more distinct while facial complexions are peachier with a natural rosiness, revealing individual wrinkles, pores and the tiniest blemish with lifelike texturing. (Dolby Vision Video Rating: 90/100) 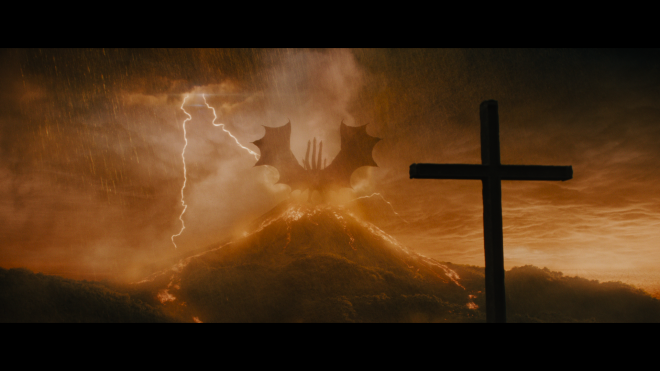 The Titans are unearthed and set out to demolish home theaters with a monstrously sensational, reference-quality Dolby Atmos soundtrack that almost immediately submerges viewers into this fantasy world of leviathan battles.

To be fair, the absolute carnage inflicted upon the sound system doesn't come full-force until Ghidorah finally emerges. The ice cracks from high in the air and chunks of it come crashing down, and the ensuing fight comes with tails swinging, roars echoing and various flying aircrafts flawlessly panning above the listening area. A torrent of debris from all the carnage fills the entire room, heavy rain droplets fall all around, and the scenes in Mexico and the final climactic brawl are thrilling demo material. Quieter, more dialogue-driven moments may not be quite as aggressive, but they nonetheless come with various subtle atmospherics that terrifically maintains an effective and highly satisfying hemispheric soundfield.

The object-based mix is also fairly front-heavy with many of those same ambient effects littering the visuals and keeping things awesomely engaging. Lots of background activity fluidly moves between the three front channels and the top heights, generating a splendidly broad and spacious half-dome soundstage. Imaging exhibits distinct clarity and superb definition in the mid-range, even during the loudest, ear-deafening moments, making every screeching roar, every explosive fire blast and every tiny piece of rubble reverb through the room with extraordinary detail. Amid the thunderous roars echoing everywhere with a mild hint of deliberate distortion, the dialogue remains intelligible above the chaos.

Better still, the low-end is incredibly commanding and forceful with a tremendous palpability, occasionally digging as low as 17Hz in a couple areas, providing couch-rattling shock waves sure to satisfy and delight audiophiles (bass chart). For most of the runtime, the bass coasts in the mid-20Hz range at high decibels, delivering room-energizing weight to the action, in each stomp, every building collapse and all the explosions. (Dolby Atmos Audio Rating: 98/100) 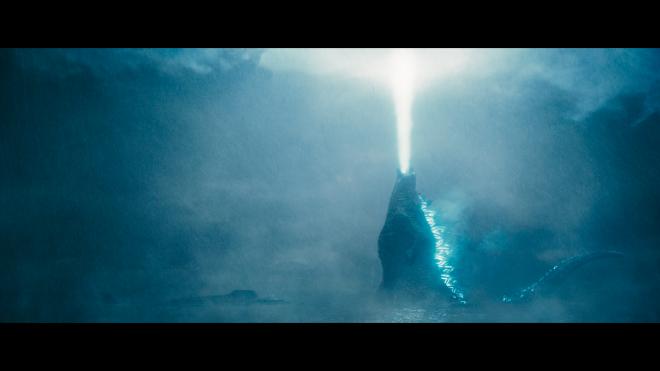 All the special features are available only on the accompanying Blu-ray disc. 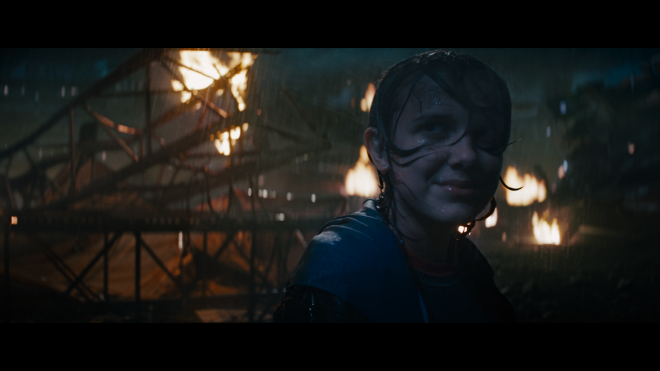 Michael Dougherty's Godzilla: King of the Monsters does precisely what it sets out to do, delivering an Americanized version of Godzilla that feels right at home with the original Toho franchise. Full of catastrophic spectacle, mesmerizing visuals and mindless monster-fighting fun, the sequel should satisfy kaiju action fans while delighting loyal Godzilla followers. The Titans reign supreme on 4K Ultra HD with a gorgeous Dolby Vision HDR presentation that dramatically improves on its Blu-ray counterpart while stomping into home theaters with an exceptional, reference-quality Dolby Atmos soundtrack. Sharing the same set of supplements as the day-and-date Blu-ray, the UHD package is highly recommended.

Sale Price 14
List Price 41.99
Buy Now
3rd Party 8.6
In Stock.
See what people are saying about this story or others
See Comments in Forum
Previous Next
Pre-Orders
Tomorrow's latest releases