Predictable and lacking in genuine humor, Pokémon: Detective Pikachu is a rather trite, by-the-numbers mystery flick, but younger audiences and Pokémon-universe fans are sure to enjoy the fantasy fun. Pokémon creatures battle on the Ultra HD stage with a strong 4K HDR10 presentation and a better Dolby Atmos soundtrack, but the same set of supplements as the Blu-ray. The overall package is Worth a Look for fans and the curious. 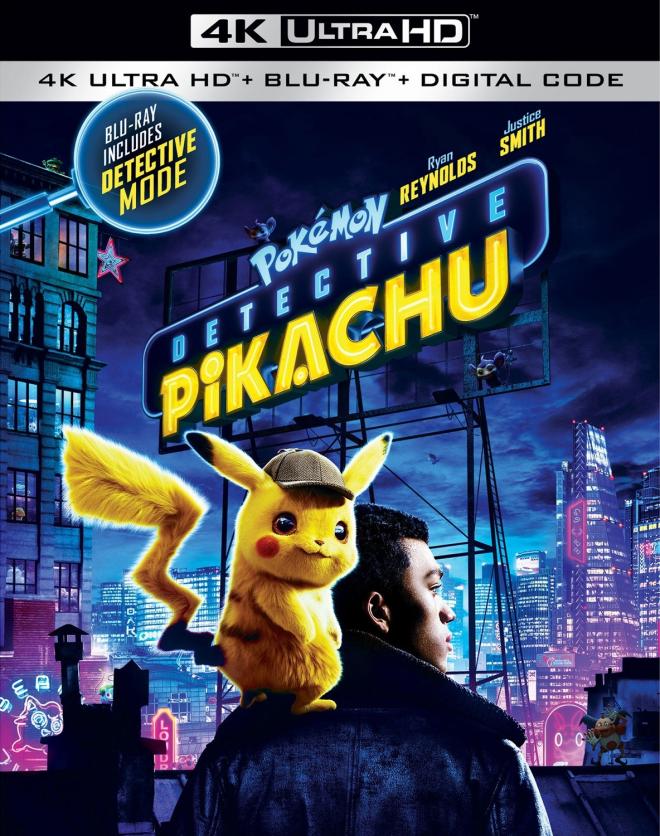 Pokémon: Detective Pikachu not only takes place in a fictional universe where Pokémon creatures coexist alongside humans, but where apparently, the fictional movies within our real-world movies also exist as full-fledged movies. To be more specific, the faux gangster film Angels with Filthy Souls from the Home Alone universe is seen playing on a vintage tube television as if it were a genuine noir classic. At once, the allusion to the holiday classic of a kid living on his own without parent supervision should earn a chuckle from some viewers, but the seemingly clever nod can also — and probably does — go over the heads of most average moviegoers. I would wager only the most ardently knowledgeable cinephile will catch the joke or immediately recognize the reference. Aside from that, the more problematic question is the casual, throwaway gag serves no purpose whatsoever but momentarily breaks the pacing. And this is emblematic of what's wrong with this live-action adaptation of the popular video game.

Ultimately, the production is mostly 104 minutes of fan service for those familiar enough with the Pokémon universe while littered with a variety of gags that better succeed at interrupting the story rather than advance it. And for a fantasy family movie that fancies itself a mystery noir thriller, the humor, allusions and a very subtle underlying awareness of itself oddly takes away from the plot's enjoyment while the mystery feels so by-the-numbers that the audience will crack the case within the first half-hour. When meeting the timid Tim Goodman (a tolerable Justice Smith) — an eye-rolling, too-on-the-nose name if ever there was one — he quickly becomes our surrogate newbie, using his train ride into Ryme City as an opportune time to summarize crucial expository details. After joining forces with Pikachu (Ryan Reynolds), acting the hard-nosed detective, the story borrows from the buddy-cop formula to solve the death of Tim's father, whose role is such a forced MacGuffin that it leaves little room for surprises.

Of course, it goes without saying director Rob Letterman (Monsters vs. Aliens, Goosebumps) and his team makes every attempt possible of throwing us off the scent and distract from the use of blatant genre tropes. At the top of our list of suspects is the immensely powerful Mewtwo, a Pokémon creature with abilities so insanely ludicrous and near-indestructible, we have to wonder how it was ever captured in the first place. When Bill Nighy shows up in a wheelchair as Howard Clifford, the visionary founder of Ryme City, the list grows to include Howard's son, Roger (Chris Geere), who is only every conveniently shown as a spoiled, wealthy, pompous jerk to his father and Tim's potential love interest, Lucy (Kathryn Newton). At the center of this whodunnit is a mysterious purple drug that, once-inhaled, turns Pokémons into raging, violent animals, and with such a short list of dubious characters, we're less drawn into the story while immediately pointing the finger to the obvious culprit.

Frankly, the origins of the drug, their effects and nefarious purpose are far more interesting than Howard's murderer and their motives as it allows our pair of super-sleuths — now joined by Lucy and her Psyduck— to explore the fancifully utopian city. With little attention placed on keeping us guessing of the killer's identity, the story quickly grows stale, and if not for the fantastical visuals or the chimerical creatures we wish were real, the movie would be a harder task to finish than capturing an adorable Cubone. Granted, Pokémon: Detective Pikachu is ultimately geared towards younger audiences who care even less about solving a complicated mystery and care more about seeing Pikachu battle Charizard or the one effectively funny shakedown of Mr. Mime. But again, this takes us back to my previous point of gags and allusions so specific, I would guess only a small few would get it. Although funny, I wonder just how many watching the movie would laugh when Pikachu chants the mantra, "Serenity now."

Warner Home Video brings Pokémon: Detective Pikachu to Ultra HD Blu-ray as a two-disc combo pack with a flyer for a Digital Copy. When redeeming said code via WB.com and Movies Anywhere, users unlock the 4K UHD version in Dolby Vision HDR with Dolby Atmos. The dual-layered UHD66 disc sits comfortably opposite a Region Free, BD50 disc, and both are housed inside a black, eco-cutout case with a shiny slipcover and collectible trading card. At startup, viewers are taken to a static screen with the usual options along the bottom and music playing in the background.

Pikachu partners with Ultra HD equipped with a great-looking HEVC H.265 encode that, while delivering a small step-up in some areas, is not a strong upgrade from its day-and-date Blu-ray counterpart.

To be sure, the 2160p transfer, upscaled from a 2K digital intermediate, shows slightly sharper lines throughout Ryme City and in the clothing, but the differences are ultimately imperceptible. In fact, much of the CG visuals fall the softer side and ever-so-lightly out of focus, and there are several poorly-resolved moments throughout, most notably the scene when Tim meets Howard Clifford for the first time.

Much of this might be due to John Mathieson's heavily-stylized cinematography, displaying a lightly muted design with lots of heavy, dark shadows to supply the plot with a neo-noir mood. This effects overall contrast, which is more noticeably subdued and gives daylight sequences a grayish overcast tone, ultimately making the 2.39:1 image feel somewhat flat and slightly dull. Thankfully, whites are crisper and more brilliant than its HD brethren, supplying those scenes with Mewtwo, Pikachu's electrifying static and the holograms with a bit more pop and radiance. Specular highlights, however, are comparable and don't seem to have improved as dramatically. On the other hand, black levels are inkier and truer, bathing the streets of Ryme City with rich, velvety shadows without sacrificing the finer details within the darkest corners.

As with the contrast and brightness, the 4K video doesn't show a significant improvement in the overall palette. The stylized photography still displays a strong orange and teal color scheme that strongly pushes the blues, which adds to the visual's noir aesthetic. But the overall enhancements are honestly nuanced and very subtle. The neon lights throughout Ryme City or in the Pikachu-Charizard battle, for example, are fuller and largely feel more animated. Ranging from lilac purples, hot pinks, vivid cyans, and sumptuous oranges, the difference between this HDR10 presentation and its HD SDR counterpart is still minimal. The same goes for primaries although the reds do show better, richer variation, especially in Lucy's outfits.

Pokémon debuts in home theaters with an excellent and largely satisfying Dolby Atmos soundtrack that's sure to please the fans but one that doesn't quite compare to some of the best tracks available.

For the most part, this object-based mix complements the visuals well, placing more emphasis and attention across the screen. This keeps the action busy with lots of background activity fluidly moving between the three front channels, into the off-screen space and lightly into the top heights, producing an expansive and spacious half-dome soundstage. The mid-range exhibits superb detailing and separation during the loudest scenes, and vocals are precise and always intelligible, never drowned out by some of the tumultuous, rowdiest segments. The low-end is surprisingly authoritative and demanding with several deeply robust, room-energizing moments that give the subwoofer a healthy workout.

Ultimately, the mix lacks rear activity, creating several moments of noticeable silence and a mix that never really generates an immersive soundscape. To be sure, there are sequences where atmospherics spread into the surrounds, such as the Pikachu-Charizard battle, but these moments are very far and few in between. The same goes for the ceiling channels, which are rarely employed and reserved for action sequences. The aforementioned arena fight and the colossal Torterra sequence, for example, come with a few ambient effects lightly traveling overhead, but they're rather unconvincing and fail to expand the soundfield. In the end, the mix gets the job done with plenty of other positives worth appreciating. (Dolby Atmos Audio Rating: 82/100)

The bonus material is only available on the accompanying Blu-ray disc.

Although made with a younger audience in mind, Pokémon: Detective Pikachu is nonetheless trite and predictable. While by-the-numbers mystery plot may keep some from sitting through this otherwise visually-captivating fantasy flick, hardened fans of the Pokémon universe are likely the best and strongest draw to this objectively forgettable production. Pokémon creatures do battle on the Ultra HD stage with a strong 4K HDR10 presentation that provides only a few noteworthy upgrades over the Blu-ray, but the Dolby Atmos soundtrack ultimately puts on a great show. Sharing the same set of supplements as the BD, the overall UHD package, in the end, is worth a look for fans of the cartoon series, card games, and the videogame.

Sale Price 24.99
List Price 41.99
Buy Now
3rd Party 20.5
In Stock.
See what people are saying about this story or others
See Comments in Forum
Previous Next
Pre-Orders
Tomorrow's latest releases