With an unforgettable performance by Val Kilmer, Oliver Stone's The Doors remains a mesmerizing portrayal and celebration of a music legend and the influential rock band. The cult music biopic takes to the 4K Ultra HD stage with a beautiful Dolby Vision HDR presentation, a reference-quality Dolby Atmos mix, and a pair of new exclusives along with the same bonuses as before. The overall UHD package is Highly Recommended.

Almost thirty years later, I regret missing Oliver Stone's The Doors in cinemas, as it's a movie that really needs to be watched on a big screen and a loud sound system. The visually wild adaptation of legendary rock band The Doors remains a fascinating and rather mesmerizing watch — told with outlandishly gonzo and stylishly erratic camerawork meant to capture or reflect the eccentric personality of Jim Morrison. With an unforgettable performance by Val Kilmer as the famed lead singer, Stone created an amazing portrait for a celebrated musician who quickly grew into a near-mythical icon of the hippie counterculture movement. The movie, despite a tendency to hop between various seemingly important events without any emotional weight or impact, is ultimately a trippy, hallucinogenic ride of a music legend who lived to the fullest free-love, devil-may-care, 1960s bohemian lifestyle. 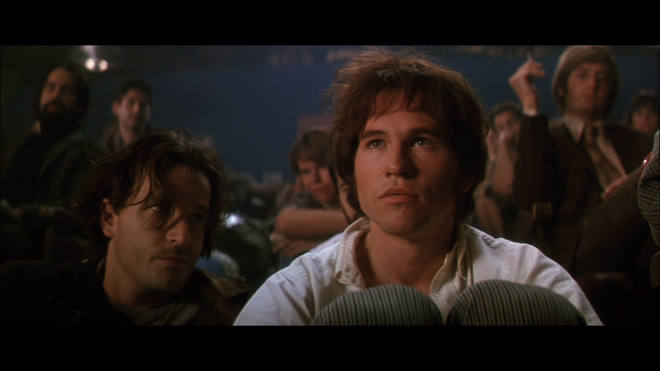 Lionsgate Home Entertainment brings Oliver Stone's The Doors to 4K Ultra HD Blu-ray as a two-disc combo pack with a flyer for a Digital Copy. As of this writing, the code unlocks the 1080p HD version with Dolby Stereo audio via moviesredeem.com or through VUDU, but this may change on July 23, 2019 when the movie releases to the public.

The triple-layered UHD100 disc sits comfortably opposite a Region A locked, BD50 disc, which is identical to the 2008 Blu-ray release. Both are housed inside a black, eco-cutout case with a glossy slipcover. At startup, the disc goes straight to an animated but silent menu screen, and when selecting "Play Feature," owners have the choice between the original 141-minute theatrical version or the new 138-minute cut, dubbed "The Final Cut."

Oliver Stone's cult biopic storms the Ultra HD stage with a resoundingly beautiful HEVC H.265 encode that greatly improves on its Blu-ray predecessor. Admittedly, due to Robert Richardson's stylized and very deliberate cinematography, the movie has never been much of a looker. Still, coming from a brand-new 4K remaster of the original camera negatives, the 2160p transfer is the best it has ever looked on any home video format, remaining faithful to the filmmakers' artistic intentions. There is better definition and resolution overall, exposing every individual hair and threading in the retro clothing along with every object decorating the background. The fine lines along the side of buildings, house interiors and the groovy 60s furniture are highly detailed. This is balanced with several softer moments, which again, relates back to the planned photography and to specifically arranged sequences.

Part of Stone and Richardson's creative approach is a lightly subdued and more low-key contrast, but the 4K video is nonetheless more vivid and brighter than the HD version. The entire sequence just before and during the Thanksgiving dinner is a particularly demo-worthy moment fans will admire. In other areas, whites are notably radiant and luminous, such as in various articles of clothing or in the stage lights. Specular highlights are not quite as dramatic, but they show a welcomed improvement nonetheless with a crisper, tighter glow in said lights or the way they reflect off faces and hair while unveiling finer details. Brightness levels arguably benefit the most, as blacks are inkier and truer with excellent gradational differences between various shades. This is greatly appreciated during stage performances layered in dark shadows and many nighttime scenes, as visibility in poorly-lit sequences is outstanding.

Perhaps of most interest to fans is the film's unique orange and teal palette, which significantly favors one side of the spectrum more than the other. Also worth noting is that Oliver Stone reportedly supervised the color grading during the remaster, so this Dolby Vision HDR presentation is presumably true to his vision and aesthetic scheme. The transfer is practically saturated in lots of tawny browns, richer oranges and warm, golden yellows, especially during desert sequences, the mind-altered reveries and Patricia Kennealy's mystical ceremonies. There are also flashes of hot pink and rapturous purple violets here and there, such as the aforementioned Thanksgiving dinner, and facial complexions come with a more natural rosiness and lifelike textures. At the same time, primaries are more sumptuous and richer, adding a bit more psychedelic pop to the Ed Sullivan and Andy Warhol sequences.

All in all, this is a brilliant upgrade for a music favorite awash in a thin layer of natural grain, providing the 2.39:1 with a fantastic film-like quality. (Dolby Vision Video Rating: 84/100)

Like the video, the original audio elements were also remastered for this Ultra HD and supervised by the film's sound editors Wylie Stateman and Lon Bender. And the results are, I'm happy to report, an awesome, reference-quality Dolby Atmos soundtrack that puts viewers right in the middle of the many live music performances.

In fact, the track's strongest and most notable feature has to be the songs filling the room with exceptional fidelity and room-penetrating clarity. The music resonates and bleeds into the surrounds and top heights, creating a highly engaging, half-dome wall of sound, terrifically enveloping the listening area. Imaging is continuously broad and spacious with convincing off-screen movement and activity. The mid-range exhibits superb detailing and separation in the instrumentation, and vocals are crystal-clear and precise, delivering outstanding intonation in every conversation and in Val Kilmer's soft-spoken musings. The low-end is amazingly robust and punchy, adding a room-energizing weight and presence to every song.

What really brings the concerts to immersive life is the fervent, chaotic noise of the audience echoing everywhere. The performances often erupt into a wave of intensely passionate applause and cheers employing every channel, and a pandemonium of screams even seem to come from above. Even as the camera moves and swings around to capture every moment, voices from the crowd are distinctly heard from specific areas of the room while other ambient effects fluidly pan in every direction. Quieter moments without music are also layered with other subtle atmospherics to maintain a convincing hemispheric soundfield, such as the commotion of city traffic or birds flawlessly flying through the overheads.

In the end, the sound engineers did a phenomenal job. (Dolby Atmos Audio Rating: 96/100)

For this Ultra HD edition of the film, Lionsgate has produced a pair of new featurettes exclusive to the format and joined by the same director's commentary track. The accompanying Blu-ray contains all the same supplements as the previous release.

Two years shy of its 30th Anniversary, Oliver Stone's The Doors remains a fascinating, hallucinogenic portrait of a music legend and emblematic icon of the hippie counterculture movement, featuring an unforgettable performance by Val Kilmer. The cult music biopic takes to the 4K Ultra HD stage with a beautiful Dolby Vision HDR presentation and a fantastic, reference-quality Dolby Atmos mix, giving fans a notable upgrade over the Blu-ray. This is the best The Doors has ever looked and sounded on home video. Featuring a pair of new exclusives along with the same bonuses as before, the overall UHD package is Highly Recommended.