Filled with shots so breathtaking that they almost seem impossible, Netflix's Our Planet is a captivating and often stunning 8-part nature documentary. Like the Planet Earth series before it, the show is packed with stunning wildlife footage, and though quite similar to that previous effort, the greater emphasis on conservation here helps to set this doc apart. From a technical standpoint, the Netflix 4K Dolby Vision/HDR10 stream is simply gorgeous and the Dolby Atmos/Dolby Digital Plus 5.1 audio track presents an immersive experience. If you have a Netflix subscription, this is a must watch. Highly Recommended. 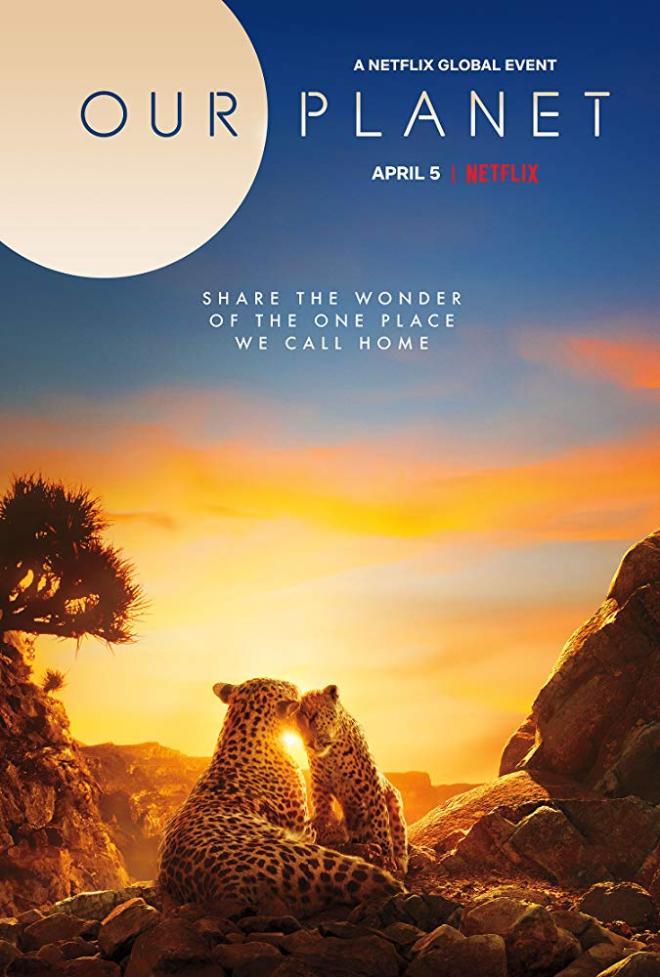 An overhead shot of a whale and her calf breaching the water; slow-motion footage of two birds battling for dominance mid-flight; an aerial view of a massive gathering of walruses -- throughout its eight episodes, I honestly lost count of how many simply jaw-dropping images there are in Netflix's Our Planet. Developed by the producers of Planet Earth, the new streaming nature documentary series offers a genuinely breathtaking look at our beautiful yet increasingly fragile ecosystem, shining a light on the varied animals that populate our world and the tragic dangers their habitats face.

Those familiar with the Planet Earth series should feel right at home here, as the show features a very similar style. With that said, though the overall approach doesn't bring anything particularly new to the wildlife doc genre, when the end results are this gorgeous, more of the same really isn't a bad thing. Likewise, Our Planet does slightly differentiate itself from its predecessors by placing a heavier emphasis on conservation while addressing the affects climate change and other man-made variables have had on wildlife habitats.

The first episode, "One Planet," serves as a kind of mission statement for the series, jumping between a few different environments -- and while a bit less focused than subsequent installments, its glacier sequence serves as one of the show's most incredible scenes. The remainder of the episodes each center around specific habitats, including "Frozen Worlds, "Jungles," "Coastal Seas," "From Deserts to Grasslands," "The High Seas," "Fresh Water," and "Forests."

Seguing from majestic shots of eagles in flight to stunning images of lions on the hunt, the doc covers the full gamut of the animal kingdom, piecing together narrative vignettes tied to different feeding and mating habits while drawing larger connections. Slow motion, time-lapse, and drone footage are all employed to great effect, capturing some genuinely striking images. The aerial cinematography, in particular, leads to some truly arresting visuals, offering unique vantage points in remote locations that would have been nearly impossible just a few years ago.

And serving as our all-knowing guide throughout the journey, is David Attenborough, whose elegant voiceover narration propels each segment forward with appropriate facts and commentary, enlightening us on the elaborate courtship rituals of birds and the strategic hunting tactics of dolphins. Attenborough's educational bits of trivia aren't all fun and games, however, as the narration also addresses rather distressing realities tied to the dangers various ecosystems are facing. Disappearing rainforests, melting glaciers, and other inconvenient truths tied to mankind's presence on the planet present continually stinging revelations.

One particularly disturbing and utterly devastating piece focuses on walruses who find themselves on cliffs that they had no business venturing to. And while some have criticized the show for being too manipulative or depressing in its presentation, even if some elements have been embellished, the core reality of the increasingly dire situations our planet is facing rings true.

While watching time-lapse footage of an insect being poisoned by a parasitic fungus, or shots of a sneaky caterpillar tricking ants into feeding it like their queen, or a sequence featuring a seldom-seen Siberian Tiger taking a casual stroll, I was frequently left with one lingering question: How the hell did anyone manage to film this?! A truly impressive feat of wildlife filmmaking, Our Planet is often filled with images so amazing that it almost seems impossible that the team was able to capture them. Of course, the same could also be said for the Planet Earth series, and while this spiritual successor might not exactly break any new ground, the sequences presented here are just as incredible as any that came before. And really, can one ever truly get enough?

Netflix presents Our Planet in up to 4K Ultra HD streaming with Dolby Vision and Dolby Atmos on compatible displays and sound systems with a Netflix Premium Plan. Likewise, the stream is available in HDR10 on 4K HDR TVs that don't support DV. Meanwhile, 1080p streaming is available for users with a Netflix Standard plan. 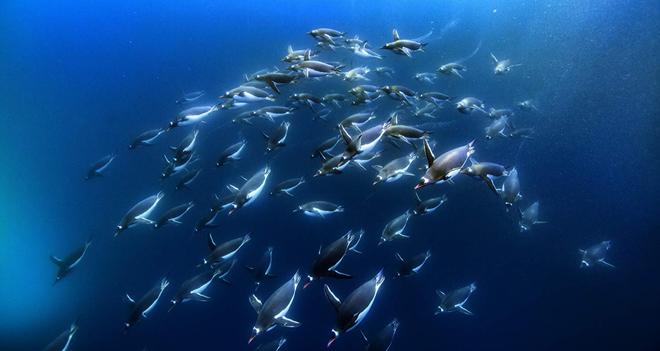 Presented with a 2160p HEVC Dolby Vision/HDR10 video transfer, Our Planet simply stuns on Netflix. Filled with sumptuous colors, impeccable detail, and dazzling contrast, the often jaw-dropping footage serves as a perfect example of HDR streaming at its best.

Shot on a variety of equipment, including the Red Helium 8K camera, the 4K digital master is mostly pristine, with a clean image. With that said, like most streaming sources, some minor compression does creep up every now and then, particularly during shots with large groups of fast-moving detail, like a giant school of fish swimming underwater. Likewise, some negligible bits of noise are also visible in the background of a few darker scenes.

Thankfully, outside of these fleeting stability issues, the picture is just plain breathtaking. Clarity is exceptional, allowing viewers to make out tiny, intricate details and textures on all the animals and varied environments with individual strands of fur and blades of grass readily visible throughout. Wide overhead shots of large groups of animals, like a massive gathering of walruses, prove to be some of the most impressive, with each and every creature clearly rendered on screen. Colors are stunning as well, with lush greens in forests, deep blues in the ocean, and a rainbow of other hues visible on a wide assortment of vibrant birds, insects, mammals, and reptiles. The Dolby Vision grading also leads to lively contrast and a fantastic sense of dimension, lending the image a realistic level of depth. The way the sun reflects off of the water and backs of whales in one aerial shot is especially striking, giving the HDR picture an extra dash of brilliance without any clipping or blooming. On the other end of the spectrum, blacks are deep and inky with great shadow delineation, offering an appropriately wide spectrum of brightness.

Though the minor compression here leaves just a bit of room for improvement for any potential Ultra HD Blu-ray disc release (fingers crossed), when it comes to Dolby Vision streaming, it really doesn't get much better than this. 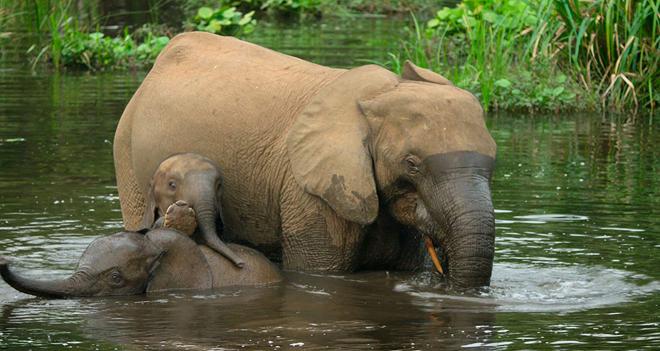 Netflix streams Our Planet with a Dolby Atmos audio track in the Dolby Digital Plus format. Likewise, a Dolby Digital Plus 5.1 track is also available for users who don't have Atmos support. Sadly, since Netflix still does not offer Atmos playback via Roku and Fire TV devices, I had to stick with 5.1 myself. Below are my thoughts on the 5.1 mix, followed by Michael Palmer's thoughts on the Atmos track.

Dolby Digital Plus 5.1 - David Attenborough's elegant narration comes through clean and properly centralized, giving every enlightening and harrowing fact due emphasis. The soundstage itself is also nicely realized, spreading appropriate atmospherics around the listening area, delicately bringing each varied location to life. Chirping birds, crashing waves, crumbling glaciers, falling rain, and other effects naturally flow from speaker to speaker with smooth imaging, lively surround use, and a great sense of directionality. Likewise, the show's rousing score carries great range and separation. And while not exactly demo-worthy, LFE activity does kick in during more dramatic moments -- especially the aforementioned glacier scene.

Perfectly complementing the visuals, the audio mix offers a wonderful extension of the action on screen, creating an enveloping experience.

Dolby Atmos - Hi, folks. Palmer here jumping in with a few thoughts on the Our Planet Atmos mix. In truth, it's quite similar to the 5.1 experience -- it's often a wonderful and enveloping experience -- while adding a taller sense of the music elements alongside a few well-placed height effects (thunder, jungle ambiance, bird calls, etc.). If you're an Atmos geek who loves to be assaulted by overhead articulation and fast-moving sound objects, Our Planet doesn't compete with demonstration worthy mixes (most Netflix Atmos mixes are relatively conservative, to be honest). But it is a more immersive and precise experience than the standard 5.1 mix. In short, it's quite good but not great. Turn this one up and enjoy it! 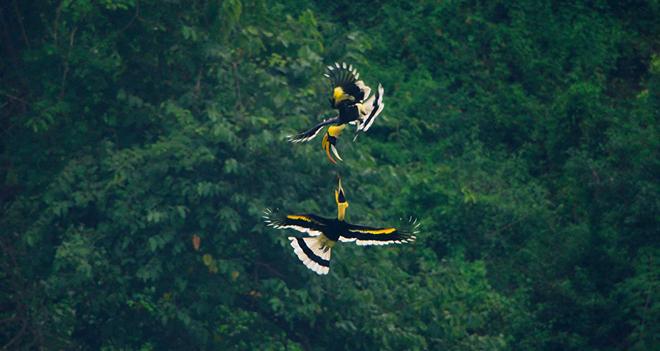 Visually gorgeous and filled with enlightening facts, Our Planet serves as a very worthy complement to the producers' other acclaimed documentary series like Planet Earth and The Blue Planet. The show's conservationist message and breathtaking images hit hard, resulting in a powerful experience -- even if the overall approach is a bit familiar. While there is some minor compression visible here and there, Netflix's 4K Dolby Vision/HDR10 stream is exceptional, and the Dolby Atmos/Dolby Digital Plus 5.1 mix is enveloping. And for fans who want to learn a bit more about how the filmmakers accomplished all those incredible shots, Netflix has even included a wonderful behind-the-scenes bonus episode. This is a must watch for Netflix users. Highly Recommended.