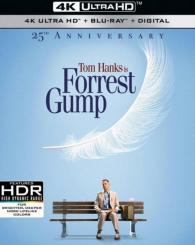 Tom Hanks gives an astonishing performance as Forrest, an everyman whose simple innocence comes to embody a generation. Alongside his mamma (Sally Field), his best friend Bubba (Mykelti Williamson), and his favorite girl Jenny (Robin Wright), Forrest has a ringside seat for the most memorable events of the second half of the 20th century. Winner of six Academy Awards®, including Best Picture, Best Director (Robert Zemeckis), and Best Actor (Tom Hanks), Forrest Gump remains one of the great movie triumphs of all time.

For a different SKU and review, see here: https://ultrahd.highdefdigest.com/58123/forrestgump4kultrahdbluray.html