Despite an ensemble of talented people, Joel Schumacher's Batman & Robin is the fourth and thankfully final sequel that effectively signaled the death to the franchise. The Caped Crusader and friends prevent climate change on Ultra HD with a beautiful-looking 4K HDR10 presentation, an excellent Dolby Atmos soundtrack but the same bonus collection as before. Still, the overall UHD package is Worth a Look for the most devoted fans of the franchise.

I could have sworn I specifically requested the less we talk about Bat nipples, the better. But, no! Instead, Joel Schumacher returns for Batman & Robin with harder, more protruding and exaggerated nipples than before. Then again, essentially everything in that sentence could likewise be said of the entire production.

In this fourth and (thank god!) final installment to the franchise, Schumacher and company crank the campy silliness up a notch with an even more garishly vulgar color palette, eye-rolling bad one-liners — mostly coming from Mr. Freeze (Arnold Schwarzenegger) — and cartoonish action sequences that actually come with comical sound effects. If Val Kilmer was not boring enough as Bruce Wayne/Batman, then let George Clooney's signature dramatic pauses dull you to sleep. Meanwhile, find entertainment in Chris O'Donnell's whiny teen Dick Grayson/Robin whine like a teenager about being the sidekick but behave like a rooster with a broken wing over the seductions of Poison Ivy (a forgettable Uma Thurman) while pinning over Barbara Wilson/Batgirl (Alicia Silverstone) — Alfred's niece? Huh!? And don't even get me started on the horribly misguided treatment of Bane (Jeep Swenson), which, honestly, is far more offensive to the Bat-verse than some stupid nipples and silver codpieces. 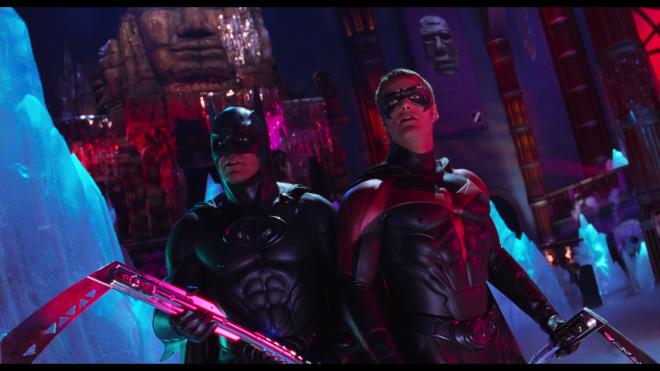 Warner Home Video brings Joel Schumacher's Batman & Robin to Ultra HD Blu-ray as a two-disc combo pack with a flyer for a Digital Copy. When redeeming said code via WB.com and Movies Anywhere, it includes the SD, HDX (1080p) and 4K UHD with Dolby Vision and Dolby Atmos on various streaming platforms. The triple-layered UHD100 disc sits comfortably opposite a Region Free, BD50 disc, and both are housed inside a black, eco-cutout case with a shiny, glossy slipcover. At startup, viewers are taken to a generic static screen with the usual options along the bottom and music playing in the background. 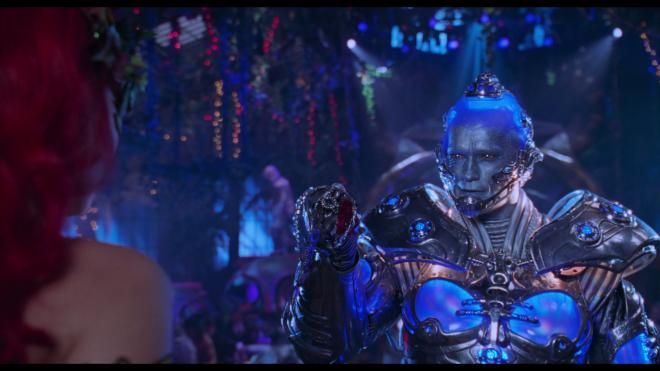 The fur and feathered pests of Gotham prevent another ice age on Ultra HD by dropping an excellent HEVC H.265 encode that decidedly outgrows its Blu-ray predecessor with sharper definition and better overall clarity. Following in the footsteps of its UHD brethren, the brand-new 4K remaster of the original camera elements showcases stronger detailing in the stage production, the inner workings of various vehicles and in the costumes, revealing far more of the infamous nipples than expected. However, the 2160p transfer also comes with its share of blurry, poorly-resolved moments, most of which are related to the CG visuals and other optical effects. Although whites enjoy a welcomed boost, looking a tad crisper, overall contrast remains relatively the same as its 1080p peer. On the other hand, specular highlights are notably tighter with a more resplendent, narrower glow in the lights.

Giving this HDR10 presentation the edge over its HD SDR counterpart, however, is without question the improved, wider color gamut, affording this fourth installment an animated new lease on life. The action is continuously bathed in a flamboyant array of sumptuously rich purples, soft magentas, lavender hues and hot fuschia pinks mixed with fiery oranges and deep, golden yellows. At the same time, Poison Ivy is always dressed in emerald greens and lush ruby reds while Mr. Freeze is endlessly surrounded by arctic blues, but his skin and suit is a blend of metallic sapphires, cobalt and teal. The 4K video also delivers silkier, inkier blacks with stunning gradational differences in the various shades while shadow details remain plainly visible, providing the 1.85:1 image a beautiful cinematic appeal. (Video Rating: 84/100) 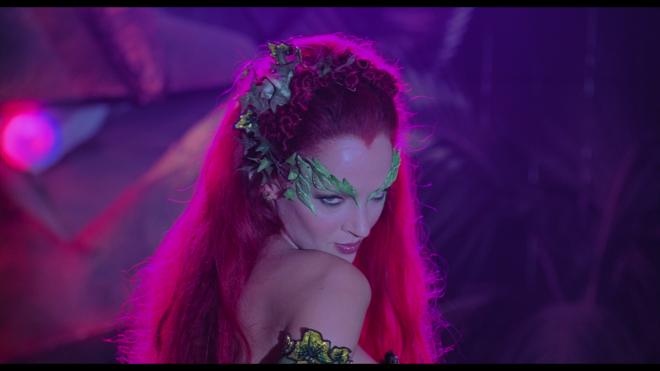 One of the worst blockbusters ever assaults home theaters with a fantastically satisfying Dolby Atmos soundtrack, nicely expanding on the cartoonish fun of its Dolby TrueHD counterpart. Given the wildly over-the-top visuals throughout, the cartoonish action comes with a variety of silly sounds and wacky noises, some of which feel reminiscent of the classic television series and often litter the surrounds. In fact, the system receives most of its workout with effects flawlessly panning from the front channels to the sides and rears, creating an ironically awesome soundscape. Occasionally, those atmospherics subtly travel across the overheads to further expand the environ while the debris of shattered glass rain down all around or the whoosh of costumed vigilantes whisk through the air. It may not always generate a convincing hemispheric soundfield, but it complements the visuals well and is surprisingly loads of fun.

Meanwhile, the original design benefits most from the extra-breathing room thanks to a more expansive and spacious soundstage, exhibiting better detailing and clarity in the mid-range. Imaging displays a great deal of warmth and clean distinction in the higher frequencies, allowing for every tiny bit of debris to come through crystal-clear, and Elliot Goldenthal's score enjoys superb fidelity and separation in the orchestration. Amid the flamboyant absurdity, vocals are mostly intelligible and well-prioritized, but the loudest action sequences can somewhat drown out the back and forth of the characters. Like its predecessors, the low-end may not be particularly standout or memorable, but it is nonetheless commanding enough to provide the action and music with notable weight and presence. (Audio Rating: 88/100) 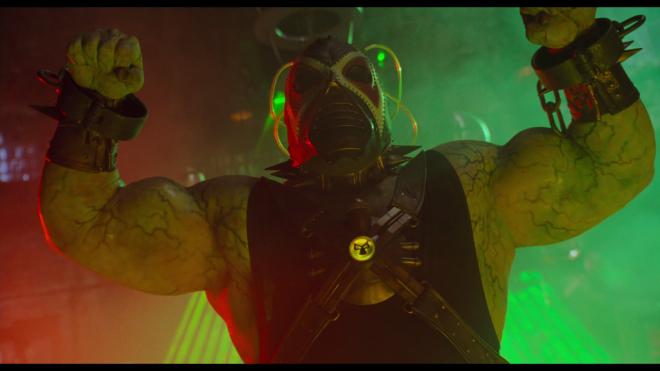 The same set of bonus features are ported over for this release and available on the accompanying Blu-ray disc, minus the R. Kelly music video "Gotham City." 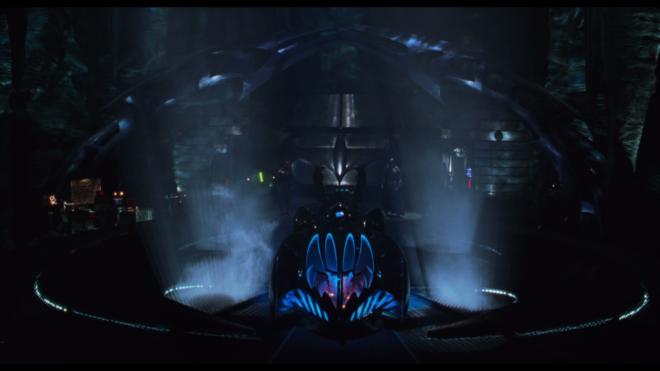 Joel Schumacher returns for Batman & Robin where the filmmaker and company join forces to completely ruin the Batman series by expanding and exaggerating everything that was wrong the previous installment. With George Clooney donning the iconic mask and cape, Arnold Schwarzenegger being his usual one-liner self, Uma Thurman dancing her seductive charms, Alicia Silverstone dressing out-of-character, Chris O'Donnell annoying everyone and Bane being more offensive than protruding Bat-nipples, this fourth and thankfully final sequel effectively signaled the death to the franchise.

The Batman and friends prevent climate change on Ultra HD with a beautiful-looking 4K HDR10 presentation that outshines its Blu-ray counterpart and features an excellent Dolby Atmos soundtrack. Although porting over the same collection of supplements found on previous home video editions, the overall UHD package is worth a look for the most devoted fans of the franchise, but then again, they could always wait for the complete set in September.

Sale Price 25.99
List Price 41.99
Buy Now
3rd Party 18.29
In Stock.
See what people are saying about this story or others
See Comments in Forum
Previous Next
Pre-Orders
Tomorrow's latest releases