Taking inspiration from Disney's original animated film, Tim Burton's new live-action take on Dumbo tells the familiar tale of a misfit elephant who soars to circus stardom on his oversized ears. But while the story has been expanded upon, the experience is lacking some of the creativity and emotional impact that some of the director's better works are known for. The 4K Ultra HD Blu-ray release features a solid HDR10 video presentation and a modest yet effective Dolby Atmos audio mix, offering a welcomed upgrade over the standard Blu-ray. Supplements are fairly light but still provide some decent insights into the production. Though far from a new Disney classic, the overall package is still Worth a Look. 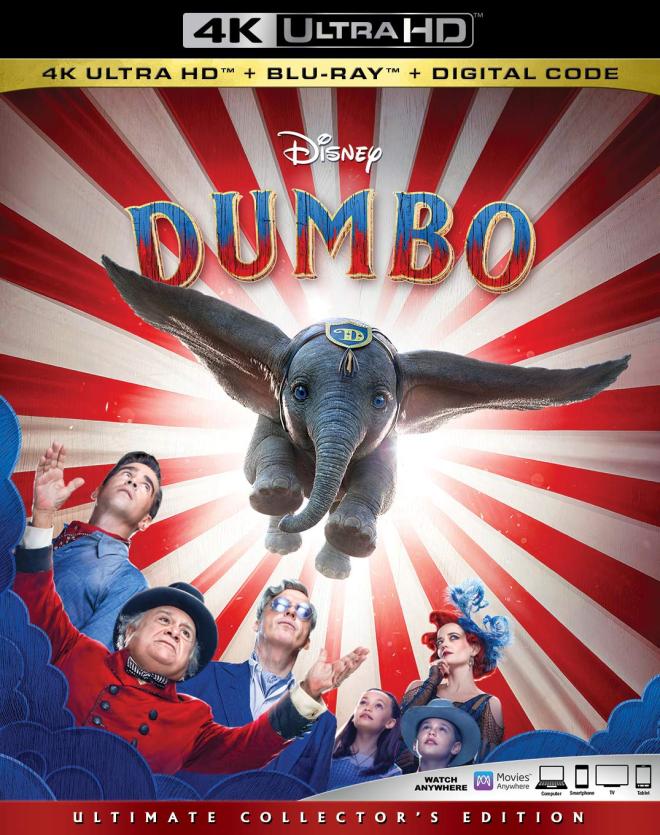 Whether they wear angora sweaters or have scissors for hands, colorful misfits and tragic outcasts rest at the center of many stories brought to the screen by Tim Burton. And in the director's latest effort, the filmmaker takes inspiration from a Disney animated classic to breathe new life into one of cinema's most adorable outsiders. A well-meaning but not wholly successful expansion of the original cartoon, this new live-action take on Dumbo attempts to lift the elephant to new heights. But while the experience is home to a few heartwarming moments and some welcomed splashes of style, the film never quite takes off.

Based on the 1941 animated film, the story greatly expands upon its source material, placing a heavier emphasis on a human cast of characters this time around. After returning from the first World War, Holt Farrier (Colin Farrell) reunites with his children, Milly and Joe (Nico Parker and Finley Hobbins), at the circus they all work at. When a baby elephant is born with abnormally large ears, Holt and the kids are charged with looking after him. Soon, the children discover that little Dumbo can actually use his floppy ears as wings to fly. But when a nefarious businessman named V. A. Vandevere (Michael Keaton) takes interest in the misfit animal and whisks him away to his elaborate theme park, poor Dumbo's life is turned upside down.

While it's understandable that the filmmakers would need to further develop the original story (and expunge some rather problematic elements that have not aged well), none of the human protagonists prove to be particularly interesting and the expanded plot is pretty basic. Sure, Michael Keaton's villain and Danny DeVito's eccentric circus owner chew up the scenery just fine, but Holt and his family sadly lack personality.

Thankfully, Burton does manage to inject some of his trademark visual flare into the proceedings, creating a lively circus atmosphere with impressive costumes and production designs. Vandevere's Dreamland amusement park is especially striking, filling the screen with a wondrous mixture of real sets and CG embellishments to create a marvelously exaggerated riff on Coney Island. Other stylistic flourishes, like a few distorted POV shots meant to take place from Dumbo's innocent and bewildered perspective, also add a bit of flash to the experience.

But outside of the excess of Dreamland, Burton's unique sensibilities appear to get lost in the shuffle -- overcome by the surprisingly generic characterizations and plotting. Likewise, though the film is home to some rather heartbreaking and heartwarming moments on paper, these ostensibly tear-jerking scenes rarely offer the impact one would expect. Dumbo's separation from his mother is still distressing and his majestic flights can still be exciting, but beyond Danny Elfman's rousing score, some of these beats feel a bit empty, as if the movie is simply going through the motions.

Despite these shortcomings, however, Dumbo himself proves to be a rather engaging creation, often eliciting more of a palpable connection to the audience than his human counterparts. The CG elephant displays a solid amount of personality and his expressive eyes manage to convey some genuine emotion. Stylized just the right amount without looking too over-the-top, the character balances realism with cartoon trappings well. In fact, the elephant is done so well I actually wish he played more of an active role in the plot instead of the human cast.

Marked by unfulfilled potential, Tim Burton's Dumbo never truly soars. There are some impressive visual touches here and there, and the film's underlying theme tied to embracing our differences is well-meaning, but for a movie featuring a sight as ostensibly memorable as an elephant flying, it's disappointingly forgettable.

Disney brings Dumbo to 4K Ultra HD Blu-ray on a BD-66 disc housed in a standard keepcase with a cardboard slipcover. The package also includes a regular Blu-ray with the film in 1080p, along with all of the supplements. An insert with instructions for a Movies Anywhere digital copy is also featured, offering access to a 4K HDR10/Dolby Vision and Dolby Atmos digital version of the film through supported services. At startup, users are prompted to select a desired language. Skippable trailers then lead to a basic menu. 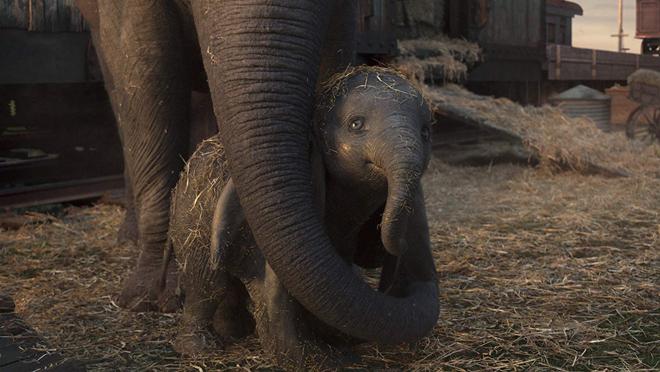 The movie is provided with a 2160p HDR10 HEVC H.265 video transfer in the 1.85:1 aspect ratio. Though the image never soars quite as high as some of the best Ultra HD video presentations, the disc still offers a welcomed improvement over the standard Blu-ray release.

Shot in a combination of 3.4K and 5.1K but ultimately finished in 2K resolution (according to IMDB), the upscaled digital source looks quite lovely in 4K with a clean and crisp appearance that is actually free from the light noise I noticed on the 1080p release. And though detail here is only marginally improved over the standard Blu-ray, overall clarity still benefits from the upgrade. Again, like the 1080p disc, the film veers toward a failry soft look, but the textures on Dumbo's skin are finely rendered and close-ups of characters reveal sharp features. Likewise, the Dreamland arrival scene proves to be a real highlight, especially in 4K, with all of the exquisite production designs perfectly visible on screen.

Marking a more apparent upgrade over the standard Blu-ray, however, are the 4K disc's HDR colors and contrast. While the movie's palette is still a bit drab in several scenes, skintones carry slightly rosier and more nuanced complexions. A purple sky in one scene is also richer and more varied in saturation, while other key uses of color, like the pink elephants on parade scene and pretty much any shot of Dreamland, carry a bit more punch and depth. Contrast is also improved and more balanced overall, correcting the isolated shots that looked comparatively washed out and flat on the standard Blu-ray. Specular highlights are also a bit more intense, bringing extra oomph to sunsets/sunrises gleaming through objects, glittering lights in Dreamland, and explosive flames during the movie's climax. Blacks are also nicely realized, but dark scenes are noticeably darker here than on the SDR transfer. This creates a greater range between bright elements and shadows, but it can also slightly obscure some details. 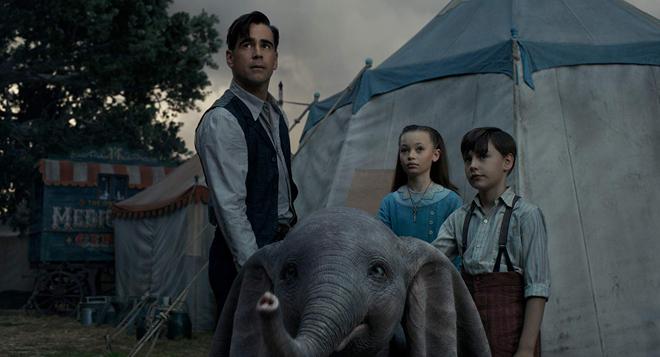 Unlike its standard Blu-ray counterpart, which houses a DTS-HD MA 7.1 mix, Dumbo is presented on 4K Blu-ray with an English Dolby Atmos soundtrack (Dolby TrueHD 7.1 core). And though the audio here does offer a slight upgrade, the film's dynamics and sound design are still relatively modest considering the story's seemingly lively setting. It should also be noted that, for whatever reason, the Atmos audio appears to be mixed about 5 decibels louder than its DTS counterpart.

Dialogue is clean but can be just a hair too low for my tastes at times. The overall soundscape is a bit frontloaded and initially fails to give much character to the circus locations. To be honest, I was initially rather underwhelmed by the mix but, thankfully, things really start to perk up after the tent collapses and Dumbo realizes his full flying ability. While not as pronounced as one might expect, the elephant's flapping ears expand to the height speakers well at key moments, adding a little extra bit of immersion to the experience. Falling debris, swooping roller coasters, and Danny Elfman's beautiful score also hit the heights and rears, giving set pieces some solid audio presence. Imaging is smooth and directionality is strong as well during these livelier scenes, allowing Dumbo's soaring effects to transition from above, in front, and behind the listener during his climactic showcase. Explosive fires offer some decent bass, but LFE isn't as commanding as some other contemporary titles.

Offering a slight improvement over the DTS-HD MA 7.1 mix found on the standard Blu-ray, this Atmos track subtly expands some key effects to the heights, but is still marked by a fairly modest scope.

Disney has included a decent assortment of behind-the-scenes featurettes. Save for one digital exclusive, all of the extras are presented on the included standard Blu-ray disc. Meanwhile, the "Dreamland: Anatomy of a Scene" supplement is only viewable with the digital copy via services like Movies Anywhere. 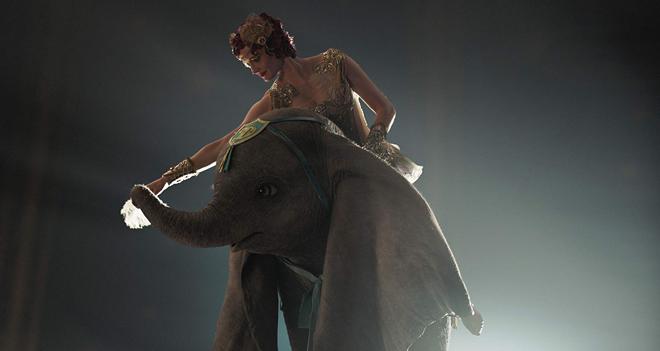 Tim Burton's Dumbo presents an expanded live-action take on the animated classic. But while there are some solid visuals, the overall experience feels a bit generic and disappointingly forgettable. On the technical front, the 4K Blu-ray offers a welcomed upgrade over its standard Blu-ray counterpart with a pleasing HDR10 transfer and a restrained yet effective Dolby Atmos mix. We don't get too many comprehensive supplements, but the included behind-the-scenes featurettes still provide a few decent insights into the production. Though the movie isn't quite as successful as some other recent Disney live-action remakes, it still has its moments. Worth a Look.

Sale Price 4.52
List Price 39.99
Buy Now
3rd Party 10.26
In Stock.
See what people are saying about this story or others
See Comments in Forum
Previous Next
Pre-Orders
Tomorrow's latest releases