After an accident shelves our cowboy hero, Woody goes through another existential adventure in Toy Story 2 while roaming about the obsessive world of vintage toy collecting. The classic sequel is unboxed thanks to a lovely 4K HDR10 video and satisfying Dolby Atmos audio, but the same collection of bonuses as before. Still, this Ultra HD edition is a Recommended collector's item.

Four years after the success of the first movie, John Lasseter returns to the fantasy bedroom of toys in Toy Story 2 where a script — again co-penned by Andrew Stanton — further questions life's purpose. Only in this existential adventure, Woody (Tom Hanks) ponders the meaning of life while exploring the neurotic, obsessive world of vintage toy collectors. The threat here is not another toy but the relentless, unstoppable march of time when the seam of his shoulder is accidentally ripped, placing him on the shelf of forgotten toys and irrelevant in Andy's life. However, while trapped in the apartment of Al McWhiggin, owner of Al's Toy Barn, the "rootinest, tootinest cowboy in the wild, wild west" discovers a renewed sense of self-worth as a collectible cultural icon and meets classic TV costars Jessie (Joan Cusack), Stinky Pete (Kelsey Grammer) and Bullseye. But he soon learns that being cherished from afar and behind a glass wall is not the same as surrounded by the cherished memories of loved ones. 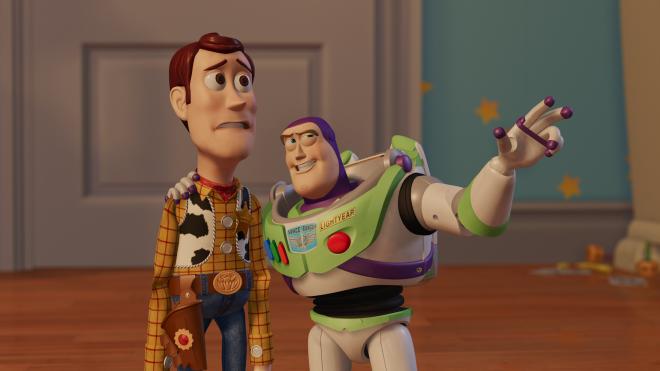 Walt Disney Studios Home Entertainment brings Pixar's Toy Story 2 to Ultra HD Blu-ray as a two-disc combo pack with a flyer for a Disney Digital Copy. When redeeming said code via RedeemDigitalMovie.com or MoviesAnywhere, users should have access to the 4K digital version in Dolby Vision HDR with Dolby Atmos. The dual-layered UHD66 disc sits comfortably opposite a Region Free, BD50 disc, which is identical to the 2010 release. Both are housed inside a black, eco-vortex case with a glossy slipcover. At startup, viewers are taken to a static screen where owners can choose between the start of the movie or look through the menu. 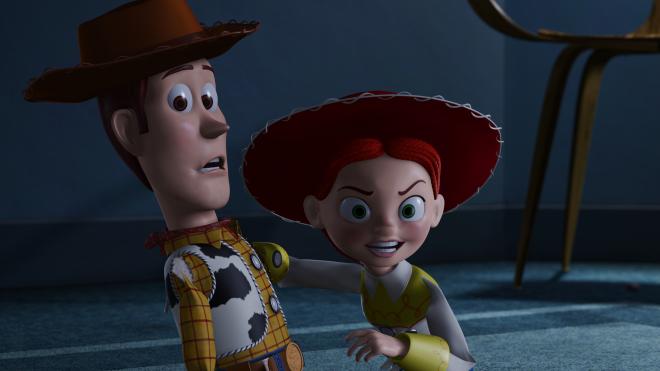 The toys discover their cultural importance and a sense of self-worth in the collectible world of 4K Ultra HD Blu-ray, beautifully revived to museum-quality by an outstanding and largely satisfying HEVC H.265 encode. As with the first movie, overall definition and clarity remain comparatively the same as the Blu-ray version, presumably due to the limitations of the technology at the time. The sequel was likely rendered at around or less than 1920x1080i resolution, and those elements were remastered into a 2K digital intermediate for the Blu-ray release, which we can assume Disney recycled for this UHD edition.

On the whole, the upscaled transfer shows a much-welcomed uptick, revealing slightly sharper lines in the furniture, the city streets and the inside of Al's Toy Barn. The stitching in the fabric of Bullseye is more distinct, and each thread of yarn making up Jessie's pulled-back hair is strikingly detailed while the corners of Stinky Pete's unopened box expose some wear and tear. Unfortunately, the 2160p picture also comes with very mild banding and several instances of noticeable aliasing along the sharpest edges.

Still, the reason for taking these classic toys out their box is to marvel at the better, brighter contrast, giving the CG-animated film a new lease on life and looking as though fresh off the assembly line. Whites are radiant and crisper with brilliant luminosity, providing the fluffy clouds an amazing, glistening glow while clothing looks cleaner and the plastic bodies and eyes pop. For the most part, specular highlights provide a nice, realistic sheen to various metallic objects, but there are a few occasions where the hottest spots bloom a smidge too harsh and engulf some the finer details. Better still, the enhanced brightness levels deliver richer, velvety blacks without sacrificing the finer background details while making Al's darkly-lit apartment feel creepier. The 4K video also comes with spotless gradational differences between the lighter and darker portions, providing the 1.78:1 image with a stunning three-dimensional quality.

The best and most noteworthy upgrade of this HDR10 presentation, however, is the dazzling, vivid array of colors, illuminating every scene with sumptuous brilliance and energy. Admittedly, there are a few times when things can feel a tad over-saturated, but on the whole, much of the picture comes with a wide selection of browns throughout Andy's room and Al's apartment while showing distinct differences between the cinnamon tone of Woody's hat and tawny, caramel shade of Bulleye. The city streets, the toy store and the elevator shaft are bathed in a mix of golden yellows, marigold, and dramatic fiery oranges. At the same time, primaries are fuller and more dynamic, especially the reds in Jessie's candy rose yarn hair, her ruby crimson hat and spirited shade of Stinky Pete's clothing. Blues and purples arguably stand out the most, like Andy's navy-colored bedding, the sky blue wallpaper or Al's apartment bathed in a variety of blue tones while the deep violet purples on Buzz and Zurg are richer. (4K HDR10 Video Rating: 84/100) 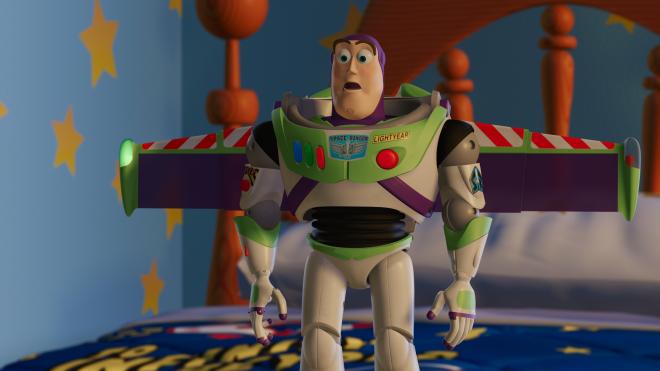 Along with the video, the animated sequel returns to home theaters with an equally excellent Dolby Atmos soundtrack, offering a welcomed step up over its DTS-HD MA counterpart.

A wider, more expansive soundstage supplies the amazing visuals with a broader sense of space, providing the action with energy and a variety of activity. For the most part, this is a front-heavy presentation, displaying a distinct and cleanly-defined mid-range with a great deal of warmth and fidelity while well-balanced channel separation delivers various convincing off-screen effects. Dialogue is crystal-clear and very well-prioritized, moving to the left and right with good effectiveness.

Despite a majority of the action being spread across the screen, a few atmospherics amusingly pan into the surrounds and top heights for some decently amusing moments of envelopment, but such moments, unfortunately, are too far and few in between and fail to generate a convincing hemispheric soundfield. Also, one of the best aspects of the lossless mix was a powerful low-end, especially in the opening sci-fi sequence, which sadly, on this object-based track is not quite as impactful or commanding. Nevertheless, the bass still provides some considerable weight and appreciable oomph to the action. (Dolby Atmos Audio Rating: 80/100) 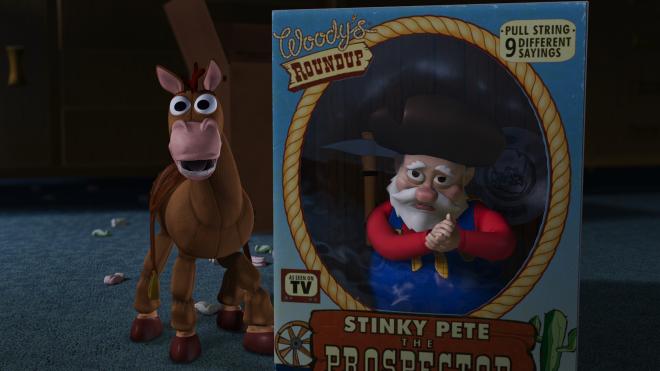 The UHD features the same set of bonuses but only available on the accompanying Blu-ray. 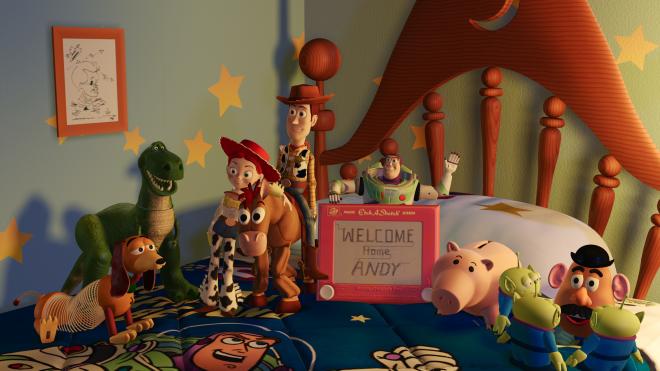 John Lasseter and Andrew Stanton return to the fantasy bedroom of toys in Toy Story 2 and roam about the obsessive world of vintage toy collection while further exploring more existential questions about life. The classic CG-animated sequel breaks free of its box with a lovely 4K HDR10 presentation and a satisfying Dolby Atmos soundtrack, easily besting its Blu-ray predecessor. Although landing on shelves with the same assortment of bonus features, the overall UHD package is a recommended collector's item.

Sale Price 19.17
List Price 39.99
Buy Now
3rd Party 19.17
In Stock.
See what people are saying about this story or others
See Comments in Forum
Previous Next
Pre-Orders
Tomorrow's latest releases