From Norwegian director Hans Petter Moland, the black comedy thriller Cold Pursuit stars Liam Neeson essentially playing a satirized version of his familiar action archetype. The American remake hits Ultra HD with a great-looking 4K Dolby Vision presentation, a generally satisfying Dolby Atmos track but a disappointingly small set of supplements. For those with a dark sense of humor, the overall UHD package is Worth a Look.

Cold Pursuit marks a turning point in Liam Neeson's four-decade-long career. Since his role as Qui-Gon Jinn in George Lucas's Star Wars: Episode I – The Phantom Menace, the Oscar-nominated actor has been steadily expanding his resume into other genres and basically reinventing himself as an action star, despite age realistically limiting certain physical requirements and dexterities. Without a doubt, Neeson's endeavors reached their apex in 2008's Taken where he played a former CIA operative with "a very particular set of skills," effectively typecasting the normally dramatic actor into a gruff and surly lone wolf type concealing the perfect skills for whatever the situation demands. Over the last decade, he's played a variation of this archetype while also imitated in many actioners starring other well-known A-list stars, to the point of quickly reaching the level of clichéd absurdity and parodied in the likes of Daddy's Home 2 where Neeson makes a cameo appearance.

A couple years later, in this black comedy action flick, Neeson brings that churlish persona down to earth as Colorado snowplow driver Nels Coxman, a name that becomes a running gag. He still carries that signature crusty, sullen charm now expected of pretty much every Neeson production, a fragrance uniquely his, overwhelming and eventually affecting the women surrounding him. Here, that poor soul is Nels' peppy, cheerful wife Grace, played by Laura Dern, who normally lights up the screen with her smile and upbeat magnetism but ultimately succumbs to Neeson's morose crabbiness. To be fair, the breakdown of their union is less from Neeson and more from their son's mysterious death, which the local police brush off as a heroin overdose, an opinion Nels immediately rejects. In fact, the entire scene at the morgue perfectly encapsulates the subtle but darkly twisted sense of humor pervading this otherwise straightforward and familiar revenge story. 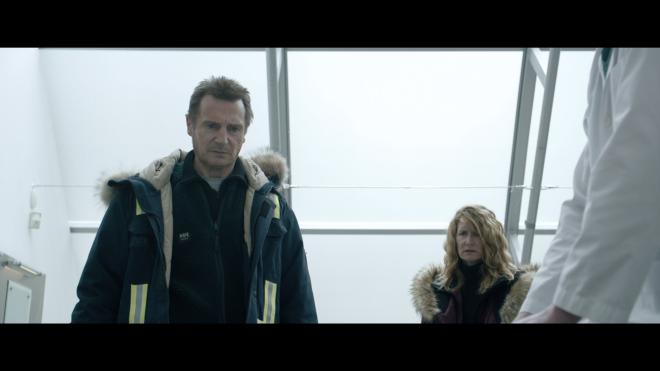 Although playing a regular blue-collar guy lacking the usual necessary skills to avenge his son's murder, Neeson is nonetheless playing a version of his now-conventionalized archetype. Except, in Kim Fupz Aakeson's script, the character trope is a tongue-in-cheek caricature, a shrewdly understated satirized portrayal whose only knowledge of dead body disposal bodies comes from reading crime thrillers, which ironically, implies we're doing the same in watching this movie and others of that ilk. Unfortunately, we'd probably never be as lucky to contend with an incompetent drug cartel as Trevor "Viking" Calcote (Tom Bateman), a psychotic but feared drug lord with a massive ego trip and health restrictions he imposes on his son (Nicholas Holmes). It also doesn't hurt to have a brother like William Forsythe, who conveniently happens to be a former hitman for that cartel, a man on the inside but understandably too busy with a domineering "trophy" wife (Elizabeth Thai).

Amid all the scheming, backstabbing and coldhearted violence, Cold Pursuit does surprisingly well in tightly balancing the plot's darker machinations and morbid Biblically-inspired subject matter — everyone is out to kill each other's firstborn sons — with a lighthearted tone and unexpected gags. From Norwegian filmmaker Hans Petter Moland (The Beautiful Country), making his Hollywood debut in this American adaptation of his own film In Order of Disappearance, this local colour tale also features the much-too eager police officer Kimberly Dash (Emmy Rossum of Shameless) doing most of the detective work and a Native American drug cartel at deadly odds against Viking. Admittedly, not all the jokes hit their mark, but Moland's camerawork is admirable, delivering impressive poignancy with the humor while never delving too far into the somber, making for a delightfully twisted entertainment.

Lionsgate Home Entertainment and Summit Entertainment bring Cold Pursuit to 4K Ultra HD Blu-ray as a two-disc combo pack with a flyer for a Digital HD Copy, which can be redeemed via moviesredeem.com or through VUDU to unlock the 4K Dolby Vision version with a Dolby Atmos audio. The triple-layered UHD100 disc sits comfortably opposite a Region A locked, BD50 disc inside a black, eco-cutout case with a glossy slipcover. At startup, the disc goes straight to a static menu screen with full-motion clips and music playing in the background. Featuring a sturdy and largely satisfying HEVC H.265 encode, Cold Pursuit was shot on digital cameras capable of 3.4K resolution but later mastered to a 4K digital intermediate. The freshly-minted 4K Dolby Vision transfer enjoys a small uptick in overall definition, but it's not a significant jump over the Blu-ray. In fact, there are several poorly resolved moments and a few soft scenes sprinkled throughout, along with instances of mild aliasing along the sharpest edges. Nevertheless, the picture remains fairly sharp with slightly better visibility of background information and stronger detailing in the clothing, buildings and in the lettering of signs.

Given Philip Øgaard's creative photography favors a neutral analogous color scheme, the palette is fairly limited and controlled, looking largely similar to its HD SDR counterpart. Regardless, primaries are a bit richer and more energetic, particularly the reds having a slightly fuller and deeper value while greens are a tad livelier and more accurately rendered. The teal-orange cinematography shows moderately more variation in the blues, but secondary hues are ultimately the real win, displaying a pretty diverse array of yellows and oranges, mostly noticeable in the lighting of interior conversations. Facial complexions are also peachier with some natural rosiness around the cheeks and revealing lifelike textures.

With all that said and done though, the most impressive upgrade in this Dolby Vision presentation is the strikingly enhanced contrast, delivering some resplendently clean and notably crisper whites throughout. Granted, the stylized cinematography is deliberately subdued for creating a somber feel, but specular highlights nonetheless radiate brilliantly with intensity, giving the edge of clouds and snow a narrow but dazzling glow that reveals each puff and line in the clouds and every sparkling snow crystal. Brightness levels also benefit from the upgrade, displaying inkier, more accurate blacks than the HD version. However, similar to the Blu-ray, poorly-lit interiors fall on the flat side with murky shadows often ruining the finer details. (Dolby Vision Video Rating: 74/100) 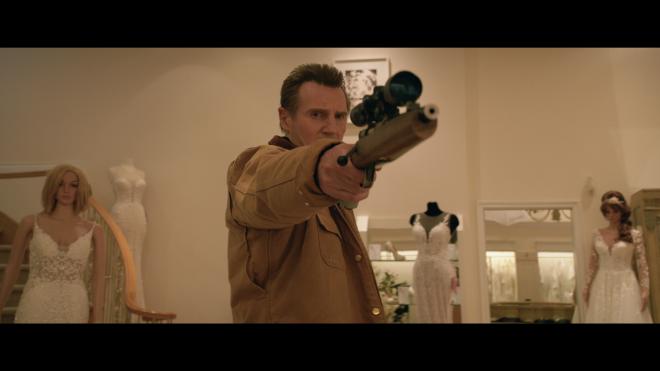 The black comedy thriller plows through a blizzard of revenge with a fantastic Dolby Atmos soundtrack with a few, key scenes that totally kill it.

From the opening moments, the object-based track immediately engages viewers with a wide and expansive soundstage, as George Fenton's haunting, minimalist music spreads across the screen and into the front heights. In fact, the score does most of the work, swelling into the surrounds during the more suspenseful moments with subtle bleeds into the ceiling. Imaging feels broad with a great deal of warmth and fidelity, as background activity moves flawlessly between the speakers with distinct clarity and separation in the high and mid ranges. Being a dialogue-driven film, vocals are given top priority, and the low-end adds a palpable, rumbling weight to the music and each gunshot.

Since this is not the typical Liam Neeson action-thriller, this mix will sadly leave some fans wanting. It's not a bad track, but like the video, the original design was made with a creative intention meant to enhance the visuals. Certain action sequences occasionally come with atmospherics that smoothly pan across the overheads, such as the tumultuous winds of a blizzard howling throughout the room. The climactic showdown that suddenly erupts into chaos also comes with a few amusing bits of ricocheting bullets and debris flying all around. These moments are decently memorable and nicely add to the visuals. However, they are far and few in between with large chunks of silence while a few scenes fail to fully immerse the viewer. (Dolby Atmos Audio Rating: 84/100) 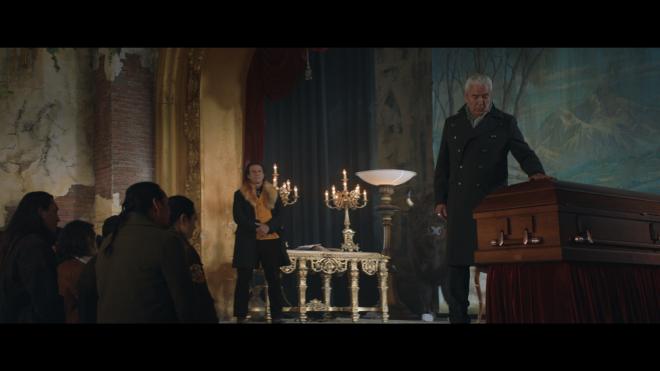 Bonuses are available on both the UHD and the accompanying Blu-ray disc. 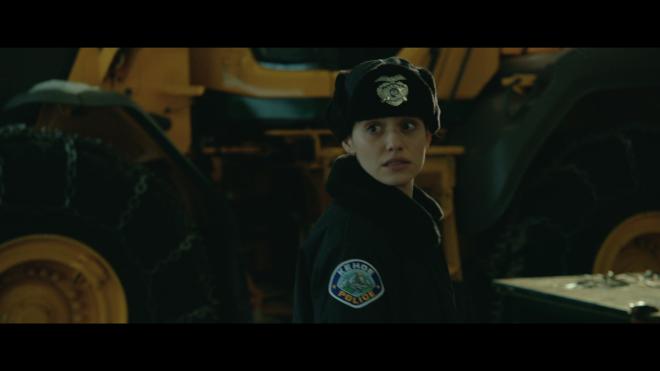 A popular ski resort town is caught in the middle of a drug war and a trail of dead bodies in Cold Pursuit, a black comedy thriller from Norwegian director Hans Petter Moland, making his Hollywood debut in this remake of his own film In Order of Disappearance. Starring Liam Neeson, essentially playing a caricature of his much-too-familiar action archetype, the American adaptation doesn't always hit its mark, but it nonetheless delivers a delightfully dark and twisted joy ride through the icy, cold mountains of Colorado. Vigilante vengeance takes hold of Ultra HD with a great-looking 4K Dolby Vision presentation that offers some minor improvements over its Blu-ray counterpart and a generally satisfying Dolby Atmos soundtrack. Although bonus material is pretty lackluster and disappointingly small, the overall UHD package is worth a look for fans with a weirdly morbid sense of humor.

Sale Price 14.85
List Price 22.99
Buy Now
3rd Party 14.28
In Stock.
See what people are saying about this story or others
See Comments in Forum
Previous Next
Pre-Orders
Tomorrow's latest releases