For as long as I can remember — or more specifically, since first discovering Avery Crounse's 1983 underrated Eyes of Fire — I've found horror tales surrounding early American settlers and smalltown British villagers of the 17th or 18th Century to be the most terrifying and scariest to ironically enjoy. The stories always center around the fear of the unknown or a dark entity lurking in the forest, the occult and pagan traditions, and even cannibalism.

Sadly, the selection within this particular subgenre, which Mark Gatniss coined as "folk horror," is rather limited and sparse. Other than Crounse's movie, Michael Reeves's Witchfinder General, Piers Haggard's Blood on Satan’s Claw and Robin Hardy's The Wicker Man are perhaps the best known, but Crowhaven Farm, The Devil Rides Out and Ravenous are other somewhat forgotten gems deserving more love and attention. Interestingly, it seems folk horror has suddenly earned a resurgence in recent years with entries like The Ritual, Hereditary, Kill List and others. 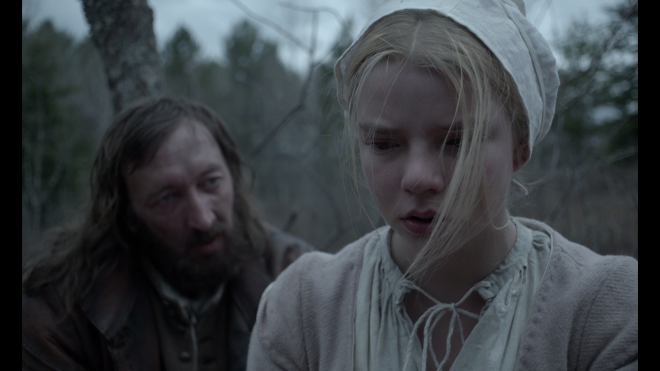 Anyhow, the point is what immediately caught my attention in Robert Eggers directorial debut The Witch — or as it is stylized The VVitch — is the story of a banished pilgrim family terrorized by an unknown supernatural force. Not only does the film comfortably fit within this folk horror subgenre, but the plot explores some weighty and fascinating sociopolitical themes that are even more pertinent in today's climate. By subtitling his film A New England Folktale, Eggers brings attention to this fact since folktales are commonly understood as embodying cultural traditions, habits, and rituals of a particular period, unwittingly allowing for an examination of the institution which normalized said customs and practices.

In this Puritan horror folktale, we have a severely religiously family whose bindingly demanding belief system is challenged at the edge of a forest, which can also be seen as the edge of the world. This serves as a larger metaphor for living at the cusp of what is known and unknown, at the edge of civilization and barbarism. Or better yet, natural law versus human-made concepts of order and understanding, where faith and conviction to a belief system give way to violent fanaticism rather than healthy skepticism, one which seeks groundless, broad explanations and blame for misfortunes, turning the innocent into victims. This is ultimately the brilliance of Eggers' The Witch, growing into a horror favorite of recent memory.

For a more in-depth take on this Puritan horror cult favorite, check out our original Blu-ray review HERE written by Aaron Peck.

Lionsgate Home Entertainment brings The Witch to 4K Ultra HD Blu-ray as a two-disc combo pack with a flyer for a Digital HD Copy, which can be redeemed via MovieRedeem but only available in HD SDR or HDX with 5.1 Dolby Digital audio. Inside a black, eco-cutout case with a glossy slipcover, the dual-layered UHD66 disc sits comfortably opposite a Region A locked, BD50 disc, which is the same Blu-ray previously released, featuring the same set of bonuses. At startup, the disc goes straight to the usual menu options, full-motion clips, and music.

Puritan horror enchants the Ultra HD Blu-ray colony with an incredibly bewitching and spellbinding HEVC H.265 encode, sacrificing its Blu-ray predecessor at the altar. Coming from a 2K digital intermediate, the difference is almost immediately apparent, as this upscaled transfer comes with a welcomed uptick in overall definition. The perfectly arranged hairdos of the women and the men's disheveled hairs are razor sharp, and the coarse threading and stitching of the costumes are distinct, adding a great sense of realism to the fabric used. We can plainly make out every nook and cranny of the log house while clearly seeing the grain and smallest imperfections in the wooden furniture, and the individual leaves of trees remain detailed in long shots. There are a few softer moments and a couple of minor instances of very mild aliasing, but it's nothing too egregious or distracting from the 2160p picture's overall positives.

Presented in its original 1.66:1 aspect ratio, the 4K video benefits nicely from improved contrast and brightness, showing cleaner and noticeably brighter whites throughout whether in the clothing or the many daylight exteriors. The improvements are arguably most apparent in the specular highlights, giving the brilliant edges of clouds a photorealistic radiance. Perhaps more impressive is the tighter, narrower glow from the light of candles and lamps, which surprisingly, makes for a darker, more somber picture in a movie that's already murky and overcast. This means significantly richer and inkier blacks throughout with dismally grim and bleak shadows that penetrate deep into the image while maintaining excellent visibility within the gloomiest corners of the house, the goat pen and the creepy forest at night.

With that in mind, the heavily stylized cinematography is then understandably restrained and subdued. Faithful to the creative intentions of the filmmakers, much of the Dolby Vision presentation falls on the lower end of the grayscale with more emphasis on earthy browns and yellows. The difference may be mild, but they are nonetheless appreciable, most apparent in William's leather jacket and the flame of candles, which now seem warmer and more true to life. Flesh tones, too, appear more accurate to the climate and atmosphere, looking a tad paler and more anemic while still being revealing every wrinkle and blemish with lifelike textures. The forest greens of trees and crimson reds of blood are also fuller and darker, adding to the moody creepiness of the environment. (Dolby Vision Video Rating: 82/100)

Witches haunt this UHD neck of the woods with the same DTS-HD Master Audio 5.1 soundtrack enjoyed on the previous Blu-ray. Honestly, a new object-based track would have been not only more interesting and welcomed, but it also would have generated a potentially different and terrifying listening experience to an already visually creepy film. Nevertheless, this lossless mix remains a strong audio presentation with a sharp and expansive mid-range, delivering excellent clarity in the upper frequencies and during the loudest segments. This produces an awesomely broad and highly-engaging soundstage with distinct, well-prioritized dialogue reproduction and a potent, terrifically responsive low-end. When applying the receivers' Dolby Surround or DTS: Neural:X up-mixing functionality, the rears and ceiling channels are often employed as ambient effects effectively bleed into the surrounds and top heights, nicely and satisfyingly expanding the soundfield. The best moments that ratchet the creepiness and atmosphere are in the story's final quarter when Black Phillip speaks and as we enter the dark forest with the chanting of witches echoing all around.

For a more in-depth take on the audio quality, you can read our review of the standard Blu-ray HERE. (Audio Rating: 84/100)

The same set of special features are ported over for this Ultra HD Blu-ray edition.

Robert Eggers' The Witch is not only part of the recent folk horror revival with tales of the natural world, creepy pagan rituals, and the supernatural occult, but it's a brilliantly insightful directorial debut with weight sociopolitical themes worth exploring and discussing. However, the film can also be enjoyed purely as a creepy, intensely suspenseful folktale of witchcraft and madness, delivering one of the best scary stories of recent cinema memory. Eggers casts a spell on Ultra HD with a beautifully bewitching Dolby Vision presentation that improves on its HD SDR counterpart but ports over the same, still-excellent DTS-HD MA 5.1 soundtrack enjoyed on the Blu-ray. Featuring the same set of supplemental material as before, the overall package is recommended for horror fans and UHD enthusiasts.