The Kid Who Would Be King - 4K Ultra HD Blu-ray

The world is in dire straits and only the one true king can save us - only he's just a kid and doesn't know how to use a sword. The Kid Who Would Be King is the right sort of 80s kid-friendly throwback that's full of adventure and action but isn't afraid to get a little scary and more than a little serious. It may have worked better as multiple films or a mini-series. As is, it's fun even if it's a tad bit clunky. Like the Lady in the Lake, 20th Century Fox delivers an often stunning 4K UHD Blu-ray package. Offering a strong 2160p transfer with excellent HDR10 and a deep throaty Atmos mix to match, The Kid Who Would Be King is Recommended. (We have also reviewed the Blu-ray.)

For bullied schoolboy Alex (Louis Ashbourne Serkis - Son of Andy), the world is in grim shape. News of global conflict is everywhere. He lives alone with his single mother and hasn't seen his father in years. Little does he know he's the world's last hope against the ancient sorceress Morgana (Rebecca Ferguson). As King Arthur's last heir, he is able to wield Excalibur - but he's also going to need some Knights! With his best friend Bedders (Dean Chaumoo) and his scholastic bullies Lance (Tom Taylor) and Kaye (Rhianna Dorris) they must find the entrance to Morgana's underworld and stop her before she's freed upon the world. Thankfully they're going to get a little wizardly help from Merlin (Angus Imrie and sometimes Patrick Stewart)! 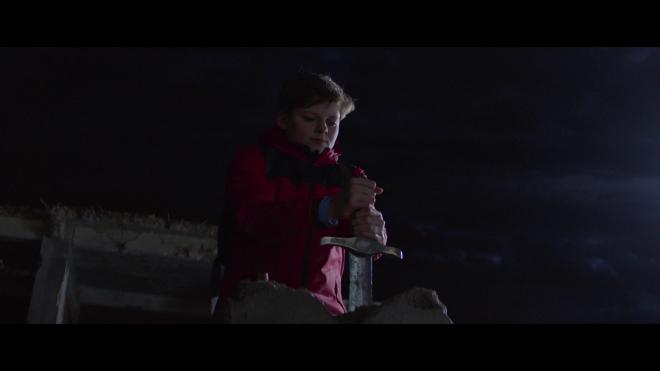 The Kid Who Would Be King was one of the many movies that came out in the busy shuffle of the Holidays that I just couldn't make time for in the theater. It's Joe Cornish's followup to the awesome Attack the Block so I was eager, after eight years, to see what the filmmaker had up his sleeves. I love the King Arthur legends. As a kid, I had a VHS of the King Arthur anime from 1979 that I literally watched until the tape broke (so many tears that day). When I discovered Monty Python and the Holy Grail I was over the moon. The fact it was used as a plot point for Indiana Jones and the Last Crusade was especially entertaining. So I wanted to see what Cornish could do to keep the adventure alive and introduce it to a younger set of kids.

The biggest issue with The Kid Who Would Be King is the nearly constant need to explain itself. This movie is extremely exposition heavy constantly finding ways to stop the film's narrative thrust to tell the audience what the hell is going on. In all honesty, I wasn't really feeling this movie for the first 45-minutes to an hour. I thought it was alight, but it struggled to hold my attention. Thankfully once the true adventure got going, once Alex and his band of "knights" moved towards their quest to stop Morgana, the film found its pace and clicked. But for a movie with a 2-hour runtime, the film equally feels like there's too much plot and then not enough movie. My hunch is had this been worked as a mini-series, something more episodic, it would have found its groove and been much better off.

As it stands, I dug The Kid Who Would Be King. It reminded me of the good old days of kids adventure movies where there was plenty of action but also enough scares that kept things exciting and dangerous. This was a nice throwback to those sorts of 80s adventures when kids were allowed to roam free, get into plenty of peril, and still somehow make it home for dinner. A big credit for why this movie works is the great cast of kids. Serkis, Chaumoo, Taylor, and Dorris all play their parts well and give the characters some great legs. Angus Imrie is a particular delight as an over-the-top "Young" Merlin. Rebecca Ferguson is also a lot of fun going full evil for her role as a witch hellbent on destroying the world. The bummer of the cast is Patrick Stewart as "Old" Merlin. Not that he's bad in the part - there just isn't enough of him and the explanation for why harkens back to my complaints about the extreme amount of exposition.

A lot happens very quickly in The Kid Who Would Be King. That's where I figure it'd be better for the middle-aged kiddo set of 10-12. Younger than that I've got a hunch it might be a lot for them to take in and actually get a grasp. On the whole, this flick is a fine piece of family-friendly entertainment that isn't too saccharine for its own good. There's plenty of action, some cool and scary fiery skeleton monsters, and plenty of humor to keep the whole group entertained. You just gotta give it some time to find its legs. The rewards are at the end of the journey.

The Kid Who Would Be King arrives in a two-disc 4K UHD + Blu-ray + Digital set from 20th Century Fox. The discs are housed in an eco-friendly black 2-disc UHD case with identical slipcover artwork. Also included in the set is an activity sheet with mazes and games for the kiddos. The disc loads to trailers for other 20th Century Fox releases before arriving at an animated main menu with traditional navigation options. 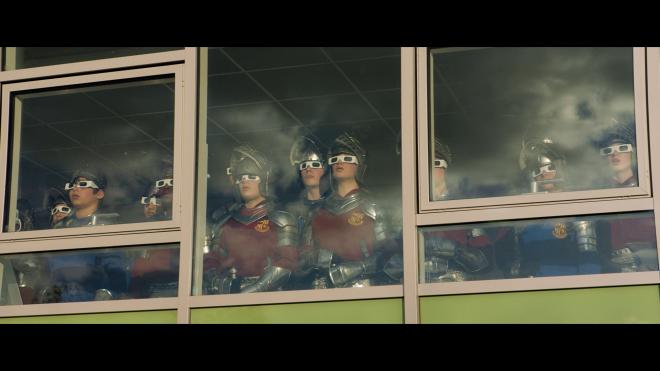 Note: This 4K UHD release comes with HDR10+. This review covers only the standard HDR10 grading.

While not being a native 4K release, color me damned impressed with this 2.39:1 216p HDR10 transfer! Detail levels are exquisite offering lovely picturesque life-like details. Facial features, scenery, London locations, everything looks fantastic giving you ample opportunity to soak in the imagery. I was really impressed with the makeup work that Rebecca Ferguson endured - both practical and digital - to make her the evil and ugly Morgana.

Visual effects can suffer on some 4K movies, but, in this case, the HDR actually made the CGI look better verses its SDR counterpart. While some "pop out" or "layered" effects are still noticeable, Morgana's flaming skeleton minions took on an extra dimension and felt like they had additional weight than they did on the standard Blu-ray. The extra pop from the bright orange flaming eyes and the shadows from their smoke trails looked terrific.

Colors are also much richer and better-rendered here than the SDR Blu-ray. Obviously, one would expect a measure of improvement with HDR, but this is a pretty clean and clear apples and oranges comparison with HDR10 working overtime to provide a colorful landscape. Primaries experience the most obvious boost, but shades of purple, green, deep red, and ashy grey colors all enjoy a healthy kick. I was also very impressed how skin tones took on a much healthier pallet while details showed more features and definition in the characters. On top of that, there is an impressive contrast/black level presence that keeps white crisp without blooming and blacks deep and inky with a nice three-dimensional vibe. Some Blu-ray to 4K releases really only offer subtle improvements but The Kid Who Would Be King offers a pretty marked difference in overall image quality. 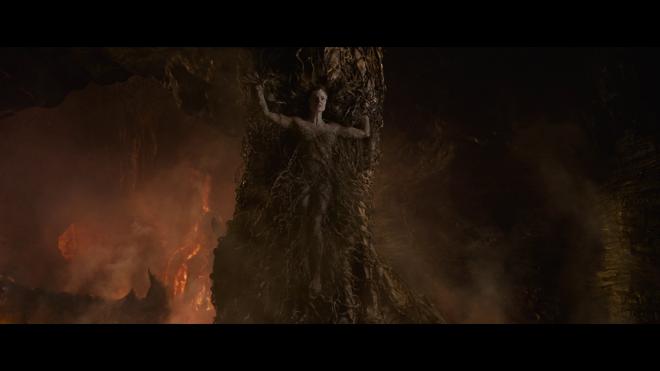 The Kid Who Would Be King sits on a nice throne of Dolby Atmos goodness. Now to be fair to the SDR Blu-ray's DTS-HD MA 7.1 mix, that was already a solid track and if it was included here, I'd be a happy camper. Essentially, if you want a quick and easy version - the Atmos mix takes everything that works so well about the DTS 7.1 mix and dials it up to 11. Dialogue is just as clean and effective against all of the other sound elements. Scoring by Electric Wave Bureau is solid material and does a great job of setting the tone and heightening the action beats.

Where this mix stands apart from the 7.1 track is with the extra cushioning for overhead activity and LFE. Any time the action takes place in a room with a tall ceiling or city streets there is a really cool extra echo effect that just isn't present in the 7.1 track. For the claustrophobic intensity of some of these scenes, the extra crowd sounds really tighten things up. Morgana's underworld dwelling is particularly creepy as she issues her chant-like orders and her minions recite them back. It was effective on the DTS track but the placement of the voices around the soundscape is more pinpointed and precise giving a particularly unnerving quality to the mix.

Adding to those creepy dissonant tones is the extra room for a stronger LFE presence. While most scenes don't really get much of a bass-rattling kick, the action sequences, the training scene, and the film's final act all enjoy a notable push. Levels are rock solid without any need for extra monitoring. All around this is a very fun nuanced Atmos track.

None of the supplemental material for The Kid Who Would Be King is on the actual 4K UHD disc - only the included Blu-ray. For a movie trying to pull off a real-world fantasy film with an impressive amount of creature and character design, the bonus features here - while a solid hour or so of featurettes - really doesn't give much of a look at the show beyond some typical EPK stuff. It's cool to see the cast take on their roles and the physical stuff they endured, but really there's nothing too insightful here. The extra four minutes of deleted scenes don't really do much either. I'd have loved a commentary track because it feels like this was supposed to be a piece of a much larger series or film. 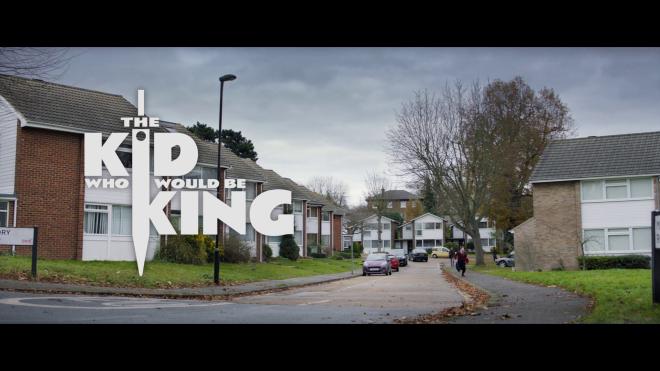 I wish I could say that The Kid Who Would Be King was a perfect 80s throwback kids' adventure movie - it isn't. But it gets darn close! My only real hangup here is that it takes a long time to get going and then it has to keep explaining itself constantly retelling parts of the Arthur Legend. But that doesn't mean there isn't fun to be had. The movie does find it's stride and makes for a thrilling finish.

20th Century Fox brings The Kid Who Would Be King to 4K UHD Blu-ray in terrific order. Featuring a beautiful 2160p HDR10 transfer and an excellent Dolby Atmos audio mix, this is hands down the best way to watch this movie leaving the SDR Blu-ray far behind. There are several bonus features but they don't amount to much impressively genuine content. If your kids are of the older set, they should have a blast with The Kid Who Would Be King. Recommended.

Sale Price 21.99
Buy Now
3rd Party 7.48
In Stock.
See what people are saying about this story or others
See Comments in Forum
Previous Next
Pre-Orders
Tomorrow's latest releases