With an excellent, restrained performance by an otherwise eccentric Nicolas Cage as a morally-taxed arms dealer, Lord of War is a visually dynamic morality fable and arguably Andrew Niccol's strongest directorial effort. The crime drama arms Ultra HD with a strong Dolby Vision HDR presentation and an improved Dolby Atmos soundtrack. Although light on the supplements, the overall UHD package is Worth a Look for the more hardened fans.

Aside from his work in the still-amazing The Truman Show, filmmaker Andrew Niccol has never won me over, and his latest projects have only solidified my view of his skill behind the camera. And yes, this estimation includes the self-indulgent philosophical meanderings of Gattaca, a serviceable sci-fi flick exploring self-important conceits that are not as challenging as it aspires to be. On the other hand, this subtly underlying sense of self-absorbed egomania actually serves Niccol's Lord of War to its advantage, assisted by the madly passionate acting talents of Nicolas Cage, and the crime drama is arguably his best effort and remains as such, in my estimate.

From his script loosely inspired by real-life gun smugglers, Niccol follows Cage's arms dealer Yuri Orlov on a morality tale of self-discovery while highlighting the illegal arms industry and the real-life international conflicts they cause. Of course, that alone is not reason enough for why this film works better than Niccol's other productions. Despite making his wealth through some horrible means, Yuri is a fascinating personality, charming his customers much the same way he charms the audience, slowly revealing the morally-conflicted human hiding beneath what we instinctively judge as a reprehensible monster. And the New Zealand-born filmmaker tells Yuri's story with dynamic, visual panache and an energy that reflects the constant stress and terrifying excitedness of the profession.

For a more in-depth take on Lord of War, check out our original Blu-ray review from 2006. 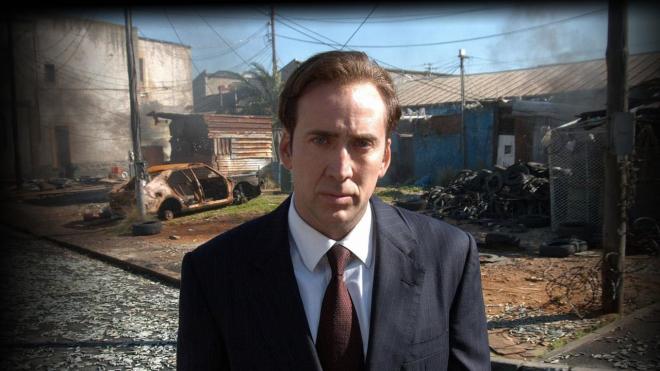 Lionsgate Home Entertainment brings Lord of War to 4K Ultra HD Blu-ray as a two-disc combo pack with a flyer for a Digital HD Copy, which can be redeemed via MovieRedeem or through VUDU but only available in HD SDR or HDX with 5.1 Dolby Digital audio. Inside a black, eco-cutout case with a glossy slipcover, the dual-layered UHD66 disc sits comfortably opposite a Region A locked, BD50 disc, which is the same Blu-ray released by StudioCanal in Europe featuring the same set of special features along with one brand-new exclusive. At startup, the disc goes straight to the standard menu screen with the usual options, full-motion clips, and music playing in the background.

The villainous yet likable Lord of War arms Ultra HD with a strong and occasionally good-looking HEVC H.265 encode, offering some appreciable enhancements over its previous Blu-ray model. Upscaled from a 2K digital intermediate, the welcomed uptick in overall resolution and definition reveal slightly better detailing in the background, the clothing, and various buildings. However, the upgrade is not a significant jump and can look a bit blurrier in some scenes than others while the fine layer of grain occasionally comes off like mosquito noise in a few spots, and there are several visible instances of mild aliasing along the sharpest edges. Also, much of the 4K video is noticeably darker and dimmer overall, making many poorly-lit sequences problematic, even in daylight exteriors with heavy shadows, and delineation tends be lost within the darkest corners. Regardless, black levels are a tad richer and inkier, providing the 2.35:1 image with an attractive cinematic quality.

The more notable win in this Dolby Vision HDR presentation is the welcomed boost in contrast, but this mild improvement, unfortunately, comes with some caveats. Whites may come with better sheen and radiance with a striking intensity, but they can also run much hotter than normal, creating some blooming in the brightest areas that consume some of the finer details while making the faces of the cast almost appear overcooked. Specular highlights, on the other hand, are more appealing, supplying the various metallic edges with a glistening glow and sparkle. Similarly, the palette benefits only somewhat, which is rather surprising given Amir Mokri's colorfully stylized cinematography. Although secondary hues display a tad more variation, it's not a significant increase over its HD SDR counterpart while flesh tones seem to run redder, almost more orangey. Then again, primaries appear slightly fuller and deeper, making the 2160p picture decently nice overall. (Dolby Vision Video Rating: 66/100)

The crime drama packs some impressive firepower thanks to a well-equipped and highly-satisfying Dolby Atmos soundtrack, greatly improving on the legacy lossy offerings of the Blu-ray.

Immediately from the start, as we scan a street littered with bullet casings, the listening area is besieged by the sound of gunfire in the distance from all directions while also echoing through the height channels. The life of a bullet opening title sequence clutters the room with a variety of discrete effects in the surrounds, many of which flawlessly pan across the overheads, creating an awesomely disturbing but terrifically immersive hemispheric soundfield. For the remainder of the runtime, the design is often crowded with various atmospherics, from the local wildlife and African villagers to the rattling of a cargo plane and the busy traffic commotion of New York City.

Like its predecessor, however, most of the action remains spread out across the front soundstage, only with improved clarity and balance among the three channels and into the top heights. Background activity fluidly moves from one side of the room to the other with convincing ease, generating a spacious, half-dome soundscape. The mid-range is also more dynamic with better warmth and richer fidelity where the listener can appreciate a crisp, clear distinction between the quietest moments and the sudden bursts of high-pitched gunfire. Dialogue reproduction is clearer, more precise, giving each conversation and exchange a deeper, more emotional bearing. Our only complaint is a low-end that doesn't quite deliver the impact some of the visuals would imply. Nevertheless, gunshots have an appreciable weight and force, making this object-based mix the best and most impressive improvement of the whole UHD presentation. (Dolby Atmos Audio Rating: 94/100)

Unlike its bare-bones Blu-ray predecessor, the Ultra HD disc comes with a few bonus features.

For me, Lord of War is arguably Andrew Niccol's best and strongest directorial effort, telling the morally-troubled tale of an arms dealer questioning, but feeling trapped by, his life decisions. Starring an excellent Nicolas Cage as the eponymous character, Niccol and his team deliver a visually dynamic and energetic production. The Ultra HD is armed with a strong but ultimately underwhelming Dolby Vision HDR presentation, offering only a few worthy enhancements over its HD SDR counterpart, but the new Dolby Atmos soundtrack, on the other hand, is definitely an upgrade fans will appreciate. Although the selection of supplements is small, they are a welcomed improvement over its bare-bones Blu-ray, making this UHD package worth a look for the more hardened fans.

Sale Price 15.99
List Price 22.99
Buy Now
3rd Party 15.99
In Stock.
See what people are saying about this story or others
See Comments in Forum
Previous Next
Pre-Orders
Tomorrow's latest releases